-ZAR back from the brink, outperforms as risk appetite stabilises.
-Goldman Sachs upgrades forecasts, looks for “significant” gains.
-Sees USD/ZAR at 15.75 by year-end on China, global recoveries.
-RMB looks for USD/ZAR decline to 16.0, Q4 range of 16-to-17.50. 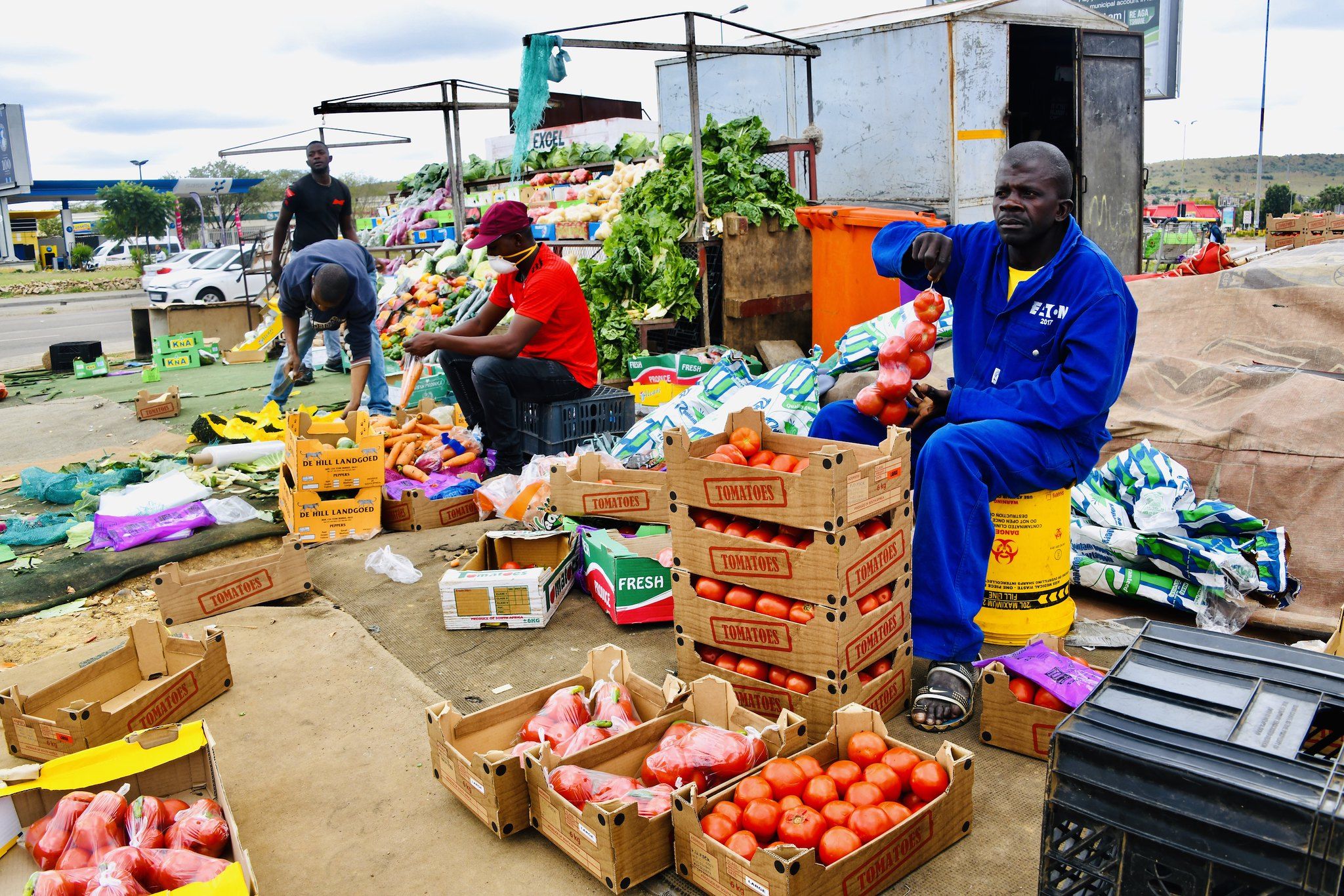 South Africa’s Rand rose against all major currencies as well as its ten largest emerging market rivals on Tuesday despite widespread gains in U.S. Dollar exchange rates, drawing a line under steep losses seen in the prior session when tightening restrictions on freedoms and activity in Europe helped further a vicious sell-off in global stock markets.

The Rand suffered its steepest loss since June 11 in response to a worsening coronavirus situation in Europe, where new infections are rising at speeds approaching those seen at the height of the first wave, although the human cost has been substantially lower than that incurred earlier.

Monday’s losses added to Friday declines inspired by a wobbling Chinese Yuan, which had its feathers ruffled by White House efforts to push two Chinese social media firms out of the U.S. But the South African unit is not only likely to recover all of its more recent declines but also a larger portion of its 2020 loss by the time the year is out, according to Goldman Sachs forecasts.

“The case for Rand strength, in our view, depends not on domestic fundamentals, but instead on the currency’s high ‘beta’ to an encouraging global picture. Since mid-August, that case has begun to play out quickly,” says Zach Pandl, global co-head of foreign exchange strategy at Goldman Sachs. “ZAR has significant room to retrace further: it scans as deeply undervalued on our metrics, and, at just above 16, USD/ZAR still stands more than 10% higher than its pre-coronacrisis levels of just above 14.” 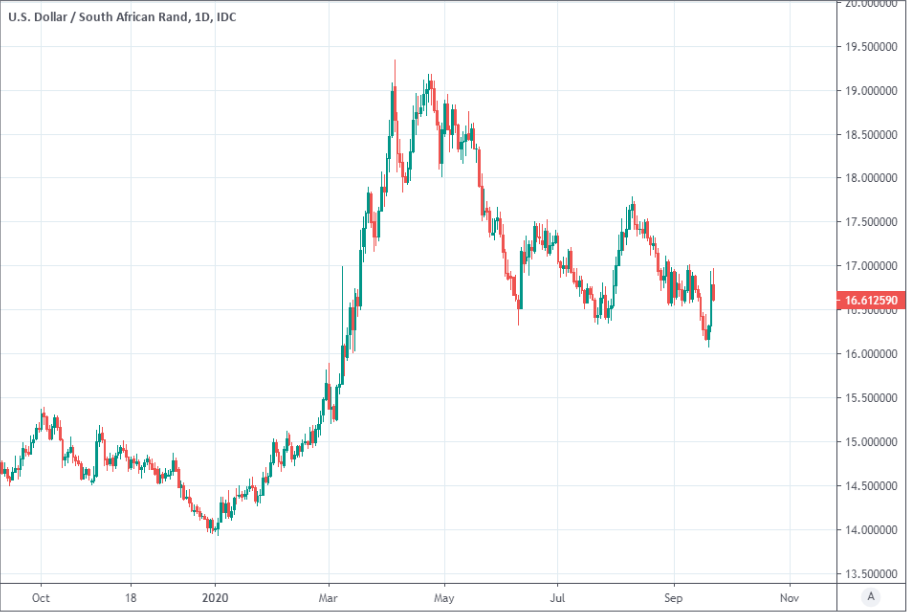 The Goldman team has warned that October’s medium -term budget update is a risk to the Rand because it’ll return the market’s focus to the deteriorating public finances, but the bank otherwise looks for the South African currency to continue reclaiming ground previously lost to the Dollar.

The bank cites improving global economic data and signs of a robust recovery in China, which is South Africa’s largest trade partner, as well as a hiatus in the U.S.-China tariff fight that would be more sustainable in the event of an opposition victory in November’s U.S. presidential election.

In addition, sharp falls in the number of new coronavirus infections detected domestically and a September move to reopen the borders offer scope for South Africa to earn additional foreign exchange through the tourism industry which is an lucrative GDP-enhancing export industry.

South Africa closed its borders in March but President Cyril Ramaphosa set out a plan last week to “gradually and cautiously ease restrictions” on international travel, with the borders now set to reopen from October 01 as part of a move to Alert Level 1, the lowest of a five-tier traffic light system in effect. 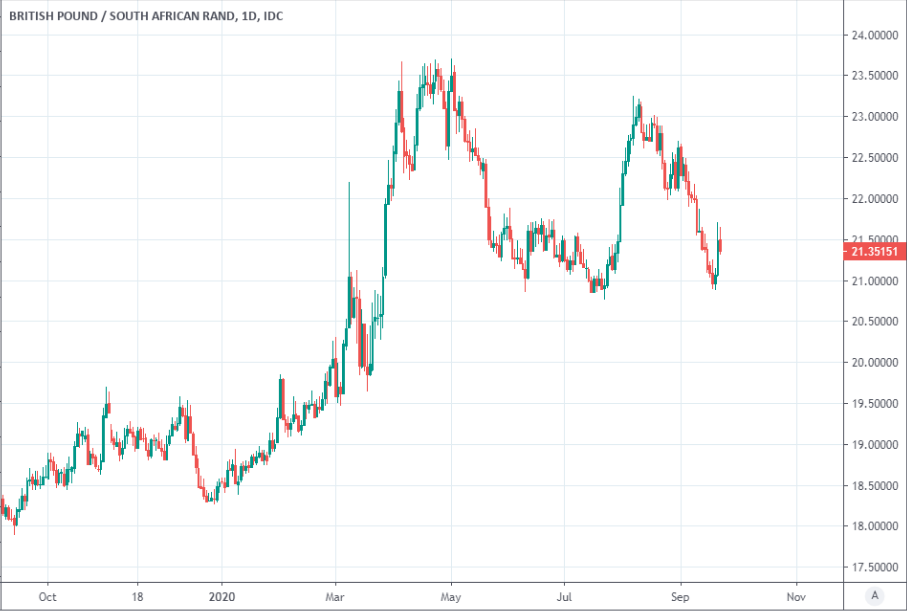 “While higher commodity prices have seen our USD/ZAR fair value estimates for 3Q20 appreciate from 16.90 in June to 15.30 currently, we expect domestic risks to keep the rand trading above its fair value, around a midpoint of 17.00, in a range between 16.00 and 17.50,” says Kim Silberman, a currency analyst at Rand Merchant Bank. “Dollar loan proceeds from the IMF and New Development Bank have also supported the rand by elevating FX funding costs, making shorting the rand more expensive. And domestic inflation remains rand positive — we expect CPI to average 2.7% over the remainder of 2020. The domestic backdrop is less positive."

Silberman says commodity prices and the Rand will both be beneficiaries of China’s infrastructure-driven recovery and that there's upside risk coming from South Africa's National Economic Development and Labour Council recovery plan if it produces a sustainable solution to Eskom’s debt problem. Eskom has been unable to keep the country’s lights on for years but with the economy on its knees and public purse more stretched than ever before as a result of the pandemic, the need for a solution has grown not least of all because generation capacity constraints impose a speed limit on the economy.

The ailing power monopoly, along with October's budget and other developments relating to the fragile national financial position are all risks to the Rand. So too are U.S.-China relations if they deteriorate enough to threaten the global recovery, not to mention coronavirus flare-ups in developed and emerging markets. Tighter restrictions and localised shutdowns are already disrupting the recovery in Europe, where the UK is at risk of a second 'lockown.' 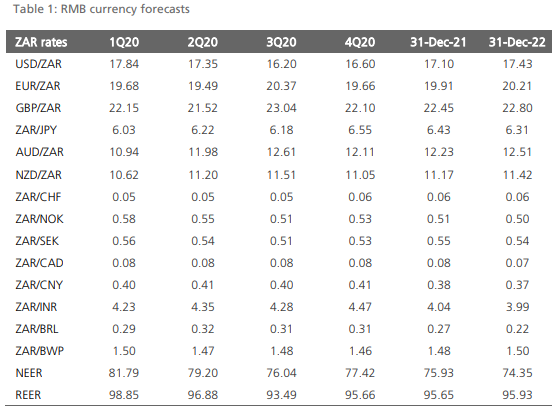