- ZAR swoons in eye of multifaceted storm on Workers' Day.

- WGBI exclusion weighs, investors 'sell in May and go away'. 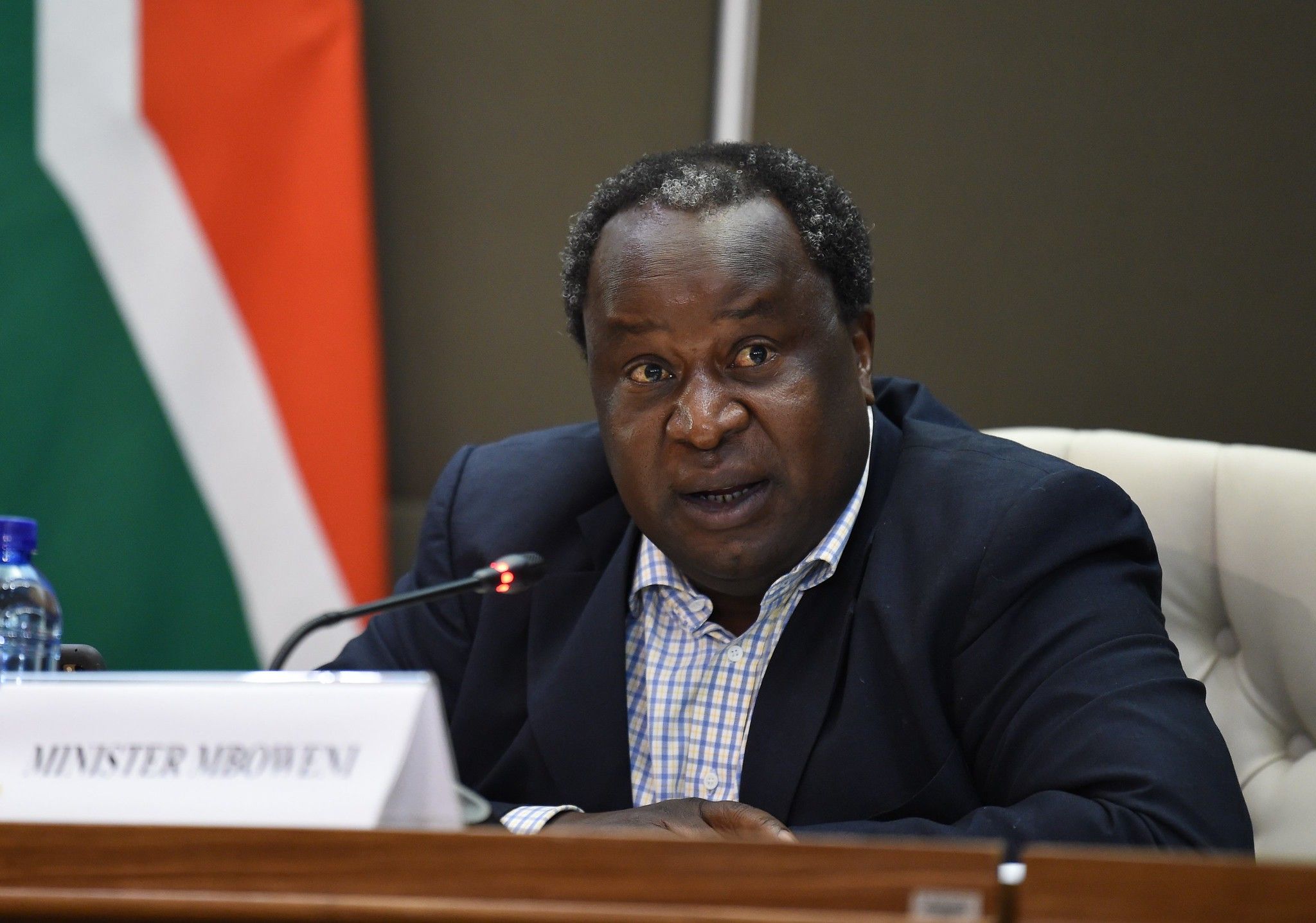 The Rand was swooning in the eye of a multifaceted storm Friday as the focus in Cape Town shifts from containing the coronavirus to coveting redemption for a long-suffering economy, although analyst forecasts suggest the danger is that May brings with it only more toil and trouble for the South African currency.

South Africa's Rand suffered a rude awakening Thursday that endured into May after local bonds were excluded from the FTSE World Government Bond Index following a delayed rebalancing of the benchmark. The exclusion results from Moody's downgrade of the local currency credit rating from 'investment grade' to 'junk' back in March and has seen fund managers who benchmark to it compelled to remove South African government bonds from their portfolios.

Casual observers wouldn't necessarily realise this looking at bond market price action on Thursday, or the lack of it on Friday which coincides with Workers' Day holiday in South Africa, although that's only because the South African Reserve Bank (SARB) sprung into action in late March and effectively called time on a rout in local bonds through a bold expansion of its monetary policy toolbox.

"The BBDXY's gain, and the decline in the AUD (-1.0%), suggest that a portion of this week's earlier moves in FX were a combination of sentiment realignments and month-end adjustments. The ZAR and the MXN have given back about 1.3% and 1.4% of their recent gains, respectively," says Stephen Gallo, European head of FX strategy at BMO Capital Markets. 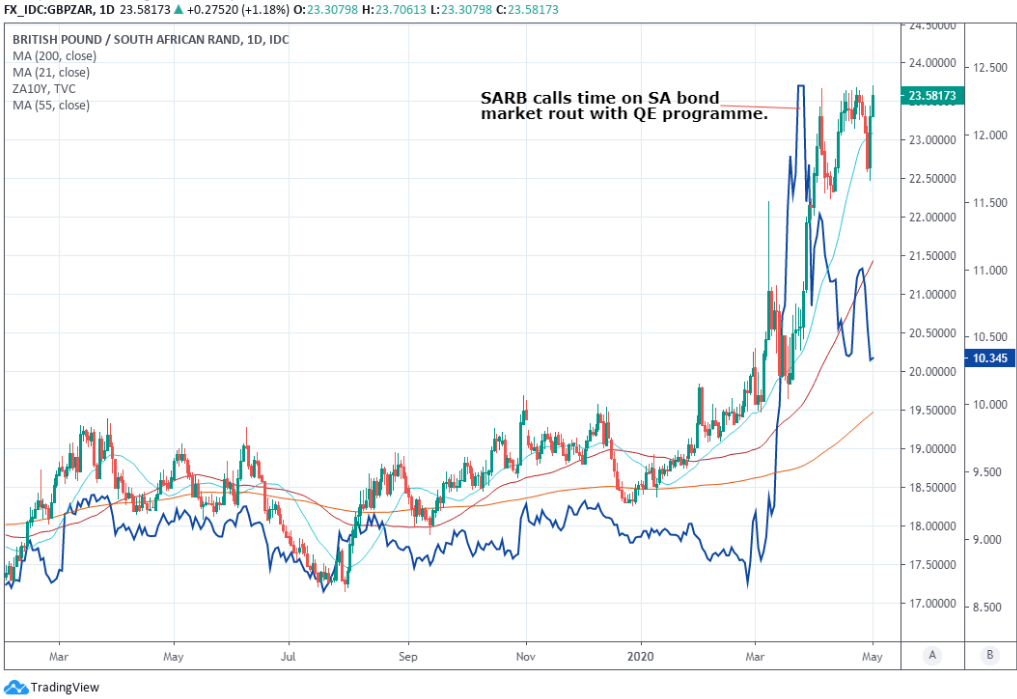 The SARB began quantitative easing in March and has been buying South African government bonds as a result, which has halted the rout in prices and kiboshed a runaway increase in yields. Since then the 10-year bond yield has slumped from an astronomical 12.34% to 10.34% by Thursday and in the process, offered a tepid form of relief to all South Africans who're adding new liabilities to their balance sheets given the 10-yr is the nation's 'risk-free' rate that gets baked into all other interest rates charged across the economy.

However, and as much as Governor Lesetja Kganyago was successful in saving the bond market, there are much tighter limits on what can be done by any one central bank to save a currency. In the currency world the market is just too large for any one participant to take on and the requisite resources are always in finite supply to those who need them most. This can be somewhat illustrated by plotting exchange rates alongside bond yields on the charts.

The bond index exclusion drove international money out of South Africa on Thursday but on Friday and in the coming weeks international concerns could conspire with the domestic to squeeze investors out further still, augering yet more losses for the Rand. Friday's losses came alongside the open of a new month, widespread losses for other risk assets and after an April that was characterised by an equally broad recovery for all including the stock markets.

But an old adage says to "sell in May and go away." The month leaves behind the open of a new tax year and the related flows that can help to lift risk assets and is often marred by underperformance for stocks, while another oft repeated adage advocates to "buy the rumour and sell the fact." If those two still mean anything at all to investors then there might be double trouble ahead this month. 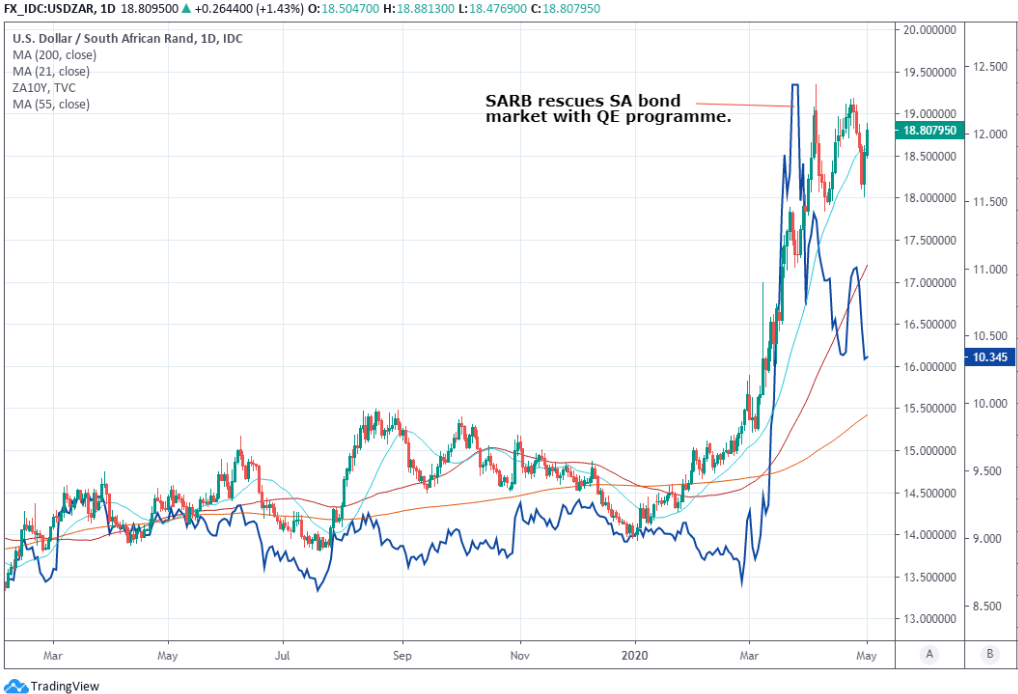 May will see countries taking steps to lift 'lockdown' measures in place when the coronavirus appeared to have been successfully curtailed, but investors may already have squeezed the last drops from that narrative and for some it may soon seem like time for economies to actually deliver some goods before they chase the likes of the Rand and stock markets higher again.

This might mean steep downside risks for stocks that rose almost as much in April as they had fallen in March, and trouble ahead for the Rand, which tends to do badly whenever large equity benchmarks fall over. And fall over they could if 'sell in May and go away' conspires with fresh U.S.-China tensions to spook the investors who perhaps struggling for imagination last month, flooded into the same old narrow concentration of household names in the U.S. market.

"Among recent “winners” are the same large-caps with strong balance sheets and secular growth prospects that had been outperforming before the viral outbreak, lifting equity market concentration to a multi-decade high: The 5 largest stocks account for 20% of S&P 500 market cap, exceeding the 18% in March 2000. This dynamic has also narrowed market breadth," says David J. Kostin, chief U.S. equity strategist at Goldman Sachs in an April 23 research note. "Narrow breadth can last for extended periods, but past episodes have signaled below-average market returns and eventual momentum reversals."

A crash and bang in stock markets could be felt right the way across the non-safe-haven currency sphere as it was in March, potentially turning a headache into a migraine for the already-weakened Rand. The USD/ZAR rate has moved back toward its April all-time highs on Friday and the Pound-to-Rand rate was testing the 78.6% Fibonacci retracement of its January 2016 downtrend - the last major technical obstacle to its own all-time high up at 25.78. 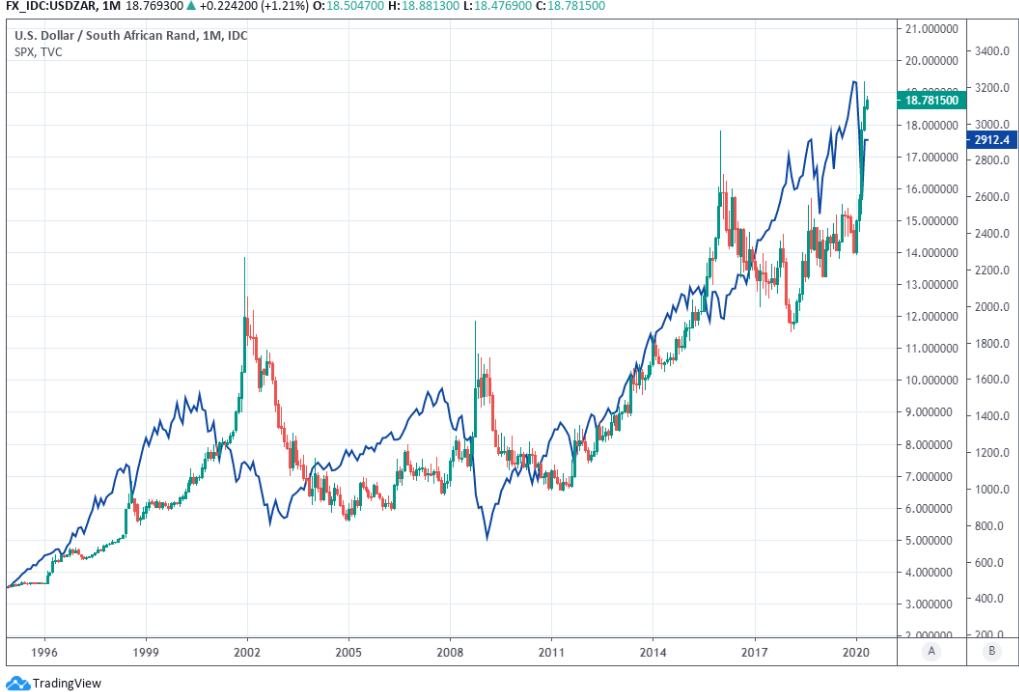 Progress in a long-running battle in Cape Town over 'structural reforms' to the economy, forged in the fires of crisis, could put a stop to Rand weakness by helping it retain external capital and might even bolster any recovery if such progress draws interest and financial support from the outside world.

More so if change in Cape Town coincides with the beginning of a global recovery that weakens the Dollar. Some economists say the recovery could begin this month as countries exit lockdown although whether it's felt in the financial markets during May, or only subsequently in June, remains to be seen.

South Africa's Rand is to some extent another side of the U.S. Dollar coin and some analysts say the greenback will not be able to weaken sustainably until investors have enough confidence to move back into emerging market assets. Others forecast that it will be June or later before a sustained economic recovery lifts risk assets globally and weakens the Dollar. This risks fanning a fiercer inferno in which reforms could potentially be forged, but also threatens further toil and trouble for the Rand this month.

"For central banks in developing countries, the offer of overnight dollar loans has been a crucial element in easing immediate USD shortages," says Jane Foley, a senior FX strategist at Rabobank. "In our view the USD cannot be expected to weaken decidedly until investors feel confident enough to move back into emerging markets. This could be some way off. In the meantime additional bouts of USD strength are likely."

The 'Brixton Bodysnatcher' wasn't the first of Jamaica's great exports to the UK because before him came Bob Marley, who sang and recorded Redemption Song from his native in 1980, a song that Finance Minister Tito Mboweni was coveting a Cape Town choir for in parliament on Thursday. The coronavirus and possible resulting demands on the public purse have amplified Mboweni's voice but are yet to galvanise South African lawmakers into sufficient action. 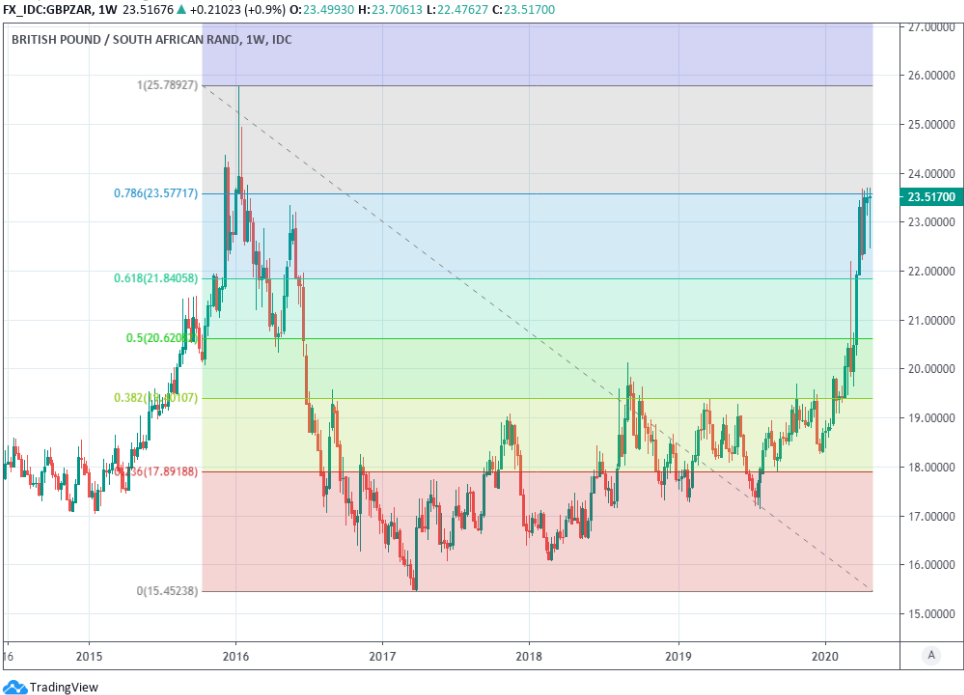 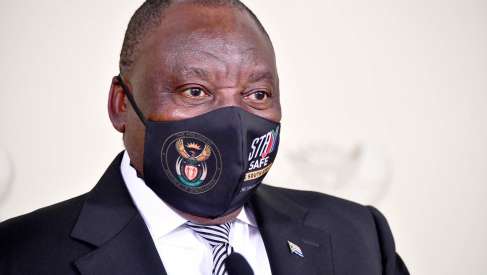