South Africa's Rand has risen more than 2% against the Dollar and Pound this week as the mood in global markets brightened after the lifting of draconian 'lockdowns' were announced in some small European economies, which came amid peaks in outbreaks in some larger hotspots. Austria, Denmark, Norway and Czech Republic are in the process of lifting the so-called lockdowns while Germany is said to be mulling a similar move for next week.

This week's developments have offered investors a glimpse of a scenario where meaningful parts of the continental economy are able to get back to work again, and hope of a similar pattern playing out in the all-important U.S. economy which has experienced the largest of all epidemics. For investors the result has been strong gains in stock markets, a weaker Dollar and breathing space for emerging markets - many of which are also now facing national epidemics.

"If the behaviour of global markets this week are an indication of the adjustment in tone to a flattening of the curve, then SA markets have much to look forward to once local transmissions are contained. In what began as a horrendous week, the past three days have proved almost euphoric with the shift in sentiment, inspiring global equity gains, a subsiding in currency volatility and narrowing of CDS spreads," says Nema Ramkhelawan-Bhana, an economist at Rand Merchant Bank. "Currency markets are revelling in the lessening of global volatility, with USD/ZAR trending back toward the lower echelons of 18.00."

The date of South Africa's peak will be an important milestone for the Rand, one which signals a turning of the tide in the national effort to contain the coronavirus while offering hope of relief to the resident population and local economy from the draconian lockdown that's in force there. And with epidemic peaks now clearly observable in Italy, Germany, Spain and others, the world has an opportunity to back-test models and methods for predicting such outcomes. 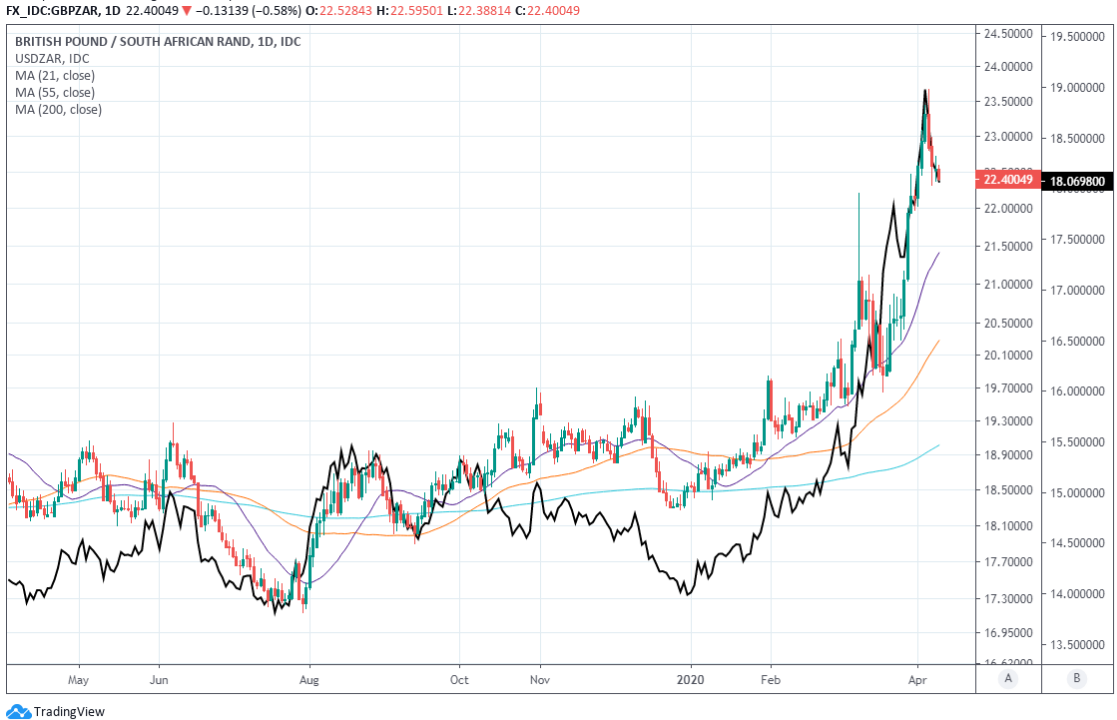 One mathematical and absolutely non-medical approach to peak projection is to multiply the size of the average household by the average time taken between assumed exposure to government disclosure of a new confirmed infection. It's thought to take an average of five days for symptoms to manifest and a further 10 days for a patient to deteriorate to the extent where hospitalisation is required. Assuming one-to three days for testing and bureaucratic processes, this produces an exposure-to-disclosure interval of 15-to-18 days.

"The rand is still at the mercy of hopes and fears surrounding the pandemic," says Elisabeth Andreae, an analyst at Commerzbank. "The times for the ZAR will get better again as soon as the light at the end of the tunnel gets brighter.

An average Italian household of 2.6 implies between 39 and 46.8 days from first human transmission, said to be on January 29 in Italy's case, before a peak is seen. This suggests Italy should have peaked between March 08 and March 16, although the actual peak was observed four days later on March 21.

The same process implies for Germany a peak between March 28 and April 03, assuming February 27 as the beginning of the outbreak there, while for the UK the implied peak is somewhere between April 05 and April 13. Germany actually peaked on March 27, although there was a similarly high number on April 03 that was followed swiftly by sharp declines in the daily infection numbers, while the UK's record was still April 05 on Thursday.

Repeating this process for South Africa implies a peak between April 24 and May 04, with larger households explaining the wider spread between the two than in Europe. This, if meaningful, has myriad implications for the Rand. 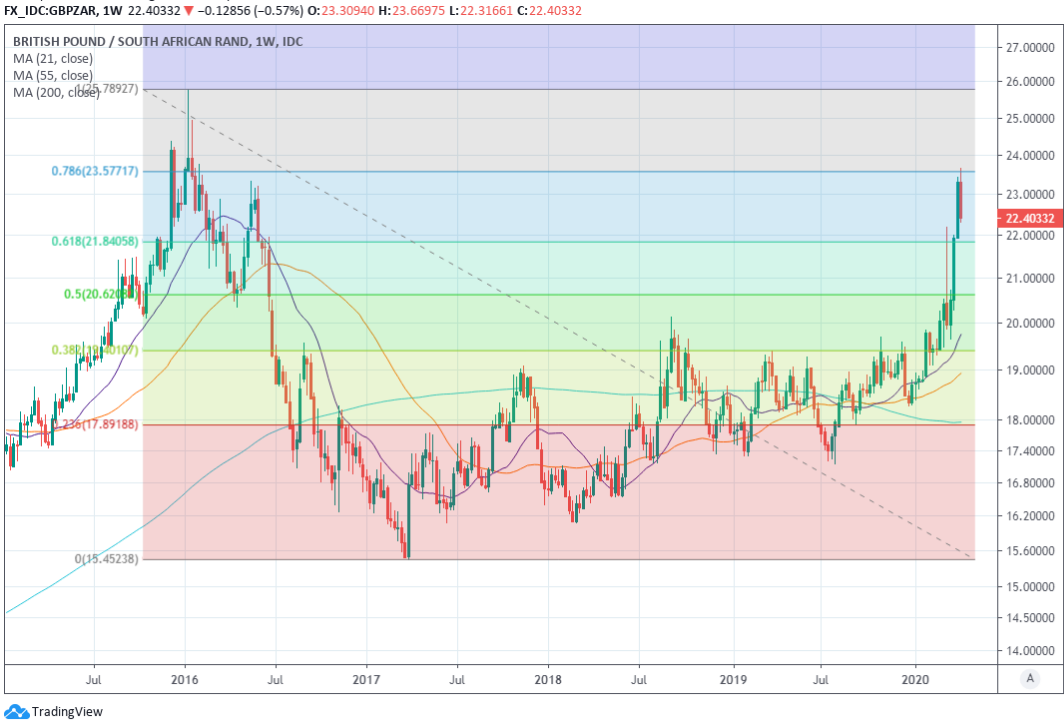 Above: Pound-to-Rand rate at weekly intervals, with Fibonacci retracements of January 2016 downtrend marked out.

An epidemic peak that nears and then materialises between April 24 and May 04 would be accompanied by the most explosive growth to date in the number of new coronavirus infections declared in South Africa and might stoke perceptions of a material worsening of the outbreak being just around the corner. This would be taking place just as a month-end exclusion from the FTSE World Government Bond Index hangs over the Rand like a Damocles Sword.

Exclusion from the index results from the Moody's downgrade of South Africa's credit rating into 'junk' territory and is widely expected to force the sale of South African government bond holdings by many investors but including those from overseas, potentially leading to large outflows from the Rand. And given the likely worsening coronavirus situtation at the time, it cannot be ruled out that those outflows pick up and put pressure on the Rand ahead of month-end.

The twin headwinds of explosive growth in coronavirus infections and a FTSE bond index exclusion could easily conspire to cause another huge crash and bang in Rand exchange rates around month-end, although if this is in fact followed swiftly by a peak in the domestic epdidemic then South Africa's Rand might find salvation in the early morning of May. One that clears the path for a rebound more sustainable than that seen over the week heading into Easter. And one that could be augmented if it comes alongside an eventual broad and sustained weakening of the Dollar that's benefited so much from the pandemic.

South Africa found its first coronavirus case on March 06 and since then there has been rapid growth in the number of infections detected and society as well as the economy have gone into 'lockdown'. There were 1,845 confirmed infections in South Africa on Wednesday.

"USD liquidity is sprayed at every single scarce corner of the market now. This is ultimately going to kill the USD momentum; it is just a matter of time in our opinion. USD could face a hit of >15% over the coming 12-24 months if the global economy gets out of the woods in the meanwhile," says Andreas Steno Larsen, a strategist at Nordea Markets. 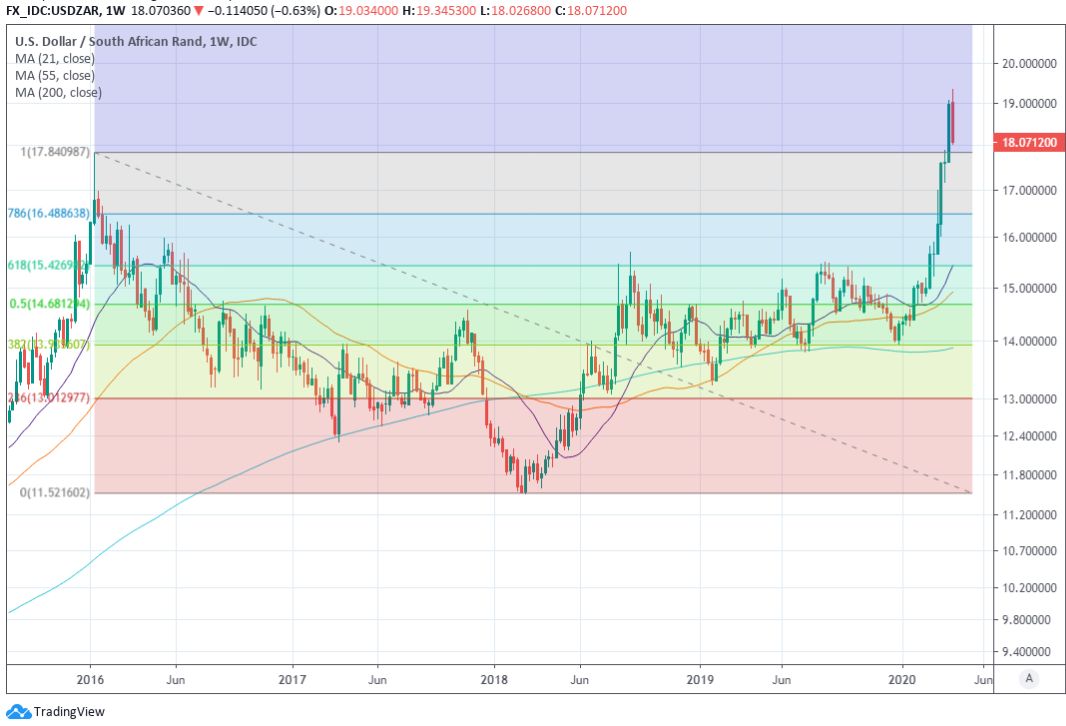 Above: USD/ZAR rate at weekly intervals, with Fibonacci retracements of January 2016 downtrend marked out.