The South African Rand came under selling pressure on Monday after Moody's announced it had cut its forecasts for South African economic growth in 2020, leading to heightened speculation that the move precedes a downgrade to South Africa's sovereign credit rating at the ratings agency next month.

Economists at Moody's cut their 2020 growth forecast for South Africa to 0.7% from a September forecast of 1.5%, saying the economy remains stuck in low gear due to lacklustre domestic private-sector demand.

Moody's also attributed the revised forecast to "the detrimental impact of widespread power outages on the manufacturing and mining activity."

Moody's matters as it is the only ratings agency that rates South African sovereign debt at investment grade, but in November 2019 it revised the outlook on the country’s last investment-grade credit rating to “negative.”

Markets are eagerly awaiting the next scheduled review of South Africa in March to see whether it has maintained investment grade status in the face of a chronic economic slowdown which has lead to questions as to whether the country will remain a credible debtor.

"Moody's is the last ratings agency to hold South Africa at investment grade. Big real money flows out of the country if this downgrade happens 27 March," says a flash comment from the hedge fund Bovell Global Macro.

Bovell Global Macro says it expects a credit downgrade to be announced next month and they are sellers of the Rand as a result.

The downgrade to South Africa's GDP forecasts are therefore being seen by some in the market as another step towards a downgrade, which if delivered could force institutional investors in South African bonds to automatically sell their holdings to comply with portfolio rules on the holding of investment grade assets.

Such outflows would create notable downward pressure on the Rand according to analysts. "The Rand has seen marked weakness compared to many other EM currencies’ performances against the USD this year, as the Budget and Moody’s downgrade risk hangs over SA, with insufficient progress on reforms in a difficult political environment persisting," says Annabel Bishop, Chief Economist with Investec in Johannesburg. 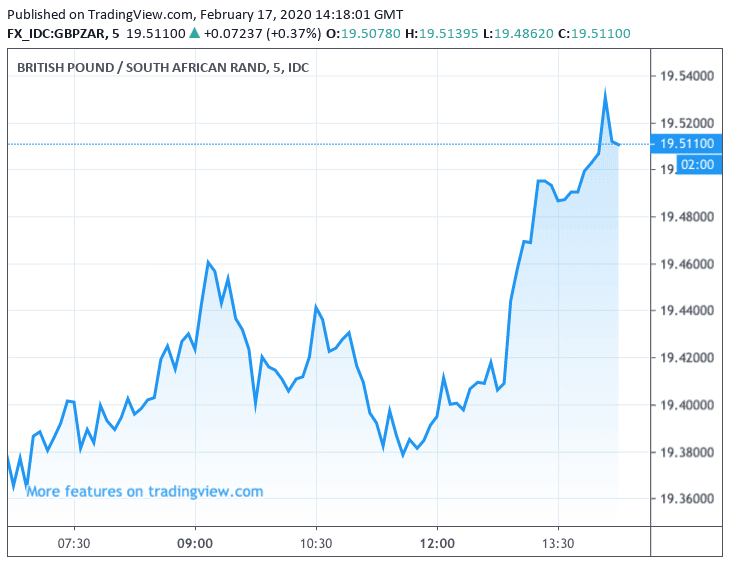 Above: GBP/ZAR rallies on the news of a groth forecast cut by Moody's

"We have seen USD/ZAR on the back foot on comments made by Moody's. Moody's has revised growth outlooks lower for South Africa to 0.7% in 2020 and 0.9% in 2021. They have cited persistent economic weakness due to lacklustre domestic private sector demand and power cuts, as the South African economy remains stuck in a low gear," says Andre Botha, Senior Dealer at Treasury One in Pretoria.

However the decision to downgrade South Africa's investment grade status will ultimately hinge on the outcome of the budget, due on Tuesday, February 25 where the Government has a chance to show the global investor community it is serious about stimulating the economy while maintaining fiscal discipline.

Last week President Cyril Ramaphosa announced some new reforms in his State of the Nation address to Parliament, however markets ultimately chose to look away, happy to await for further details from Tito Mboweni at next week's budget presentation.

Credibility over reform to Eskom and other parastatals such as SAA are key in creating a message to global investors and Moody's, who will assess the country's books before delivering their verdict on whether South Africa will remain a dependable borrower over coming years.