- ZAR soars higher against GBP and USD amid risk recovery.

- Lifting ZAR off lows against USD, GBP but gains to be limited.

The Rand soared higher against the Pound and Dollar Tuesday as investors chased risk assets the world over amid a more upbeat mood in global markets although analysts say that gains could be limited by both domestic as well as international factors in the weeks ahead.

South Africa's Rand gained more than half a percent against Sterling and a full percentage point over the Dollar Tuesday as investors celebrated what appears to be a slower spread of the coronavirus infection in China.

This is after China said new infections were just 2,478 in the 24 hours to midnight on Monday, down from 3,062, which has further encourgaged the market's view that the outbreak should be brought under control soon.

"The rand gained 0.4% this morning as markets reacted positively to what seems to be the peak of the coronavirus. The local unemployment rate remaining at 29.1% was also well received, aiding the pullback on the rand to below R14.90/$," says Bianca Botes, a treasury partner at Peregrine Treasury Solutions. "These short-term sporadic retracements provide good foreign currency purchasing opportunities." 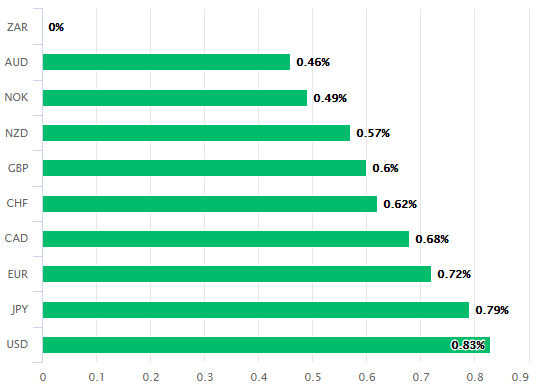 China's disclosure has tempered fears of a protracted disruption to its economy and so much so that not even the worst South African manufacturing production result for five years could prevent the Rand from climbing on Tuesday.

Manufacturing production fell -2.8% on a month-on-month basis in December when economists were looking for only a  -0.7% fall, with the miss being in part the result of unprecedented levels of load-shedding at Eskom into year-end when rolling blackouts reached 'stage six'.

Manufacturing output was down by larger -5.9% on a year-over-year basis during December, adding weight to fears the economy may have contracted for a second consecutive quarter in the final months of the year. That would mean a second technical recession for South Africa in as many years although economic peril would not have been obvious to those watching South African exchange rates, which rose broadly on Tuesday.

"High-yielding EM currencies appear to be benefitting from positive carry. With little on the data front to distract from the allure of high real interest rates, the rand’s partial strength should be preserved, though the impetus to move substantially lower than USD/ZAR14.90 is lacking given the US dollar’s strength," says Nema Ramkhelawan-Bhana at Rand Merchant Bank. 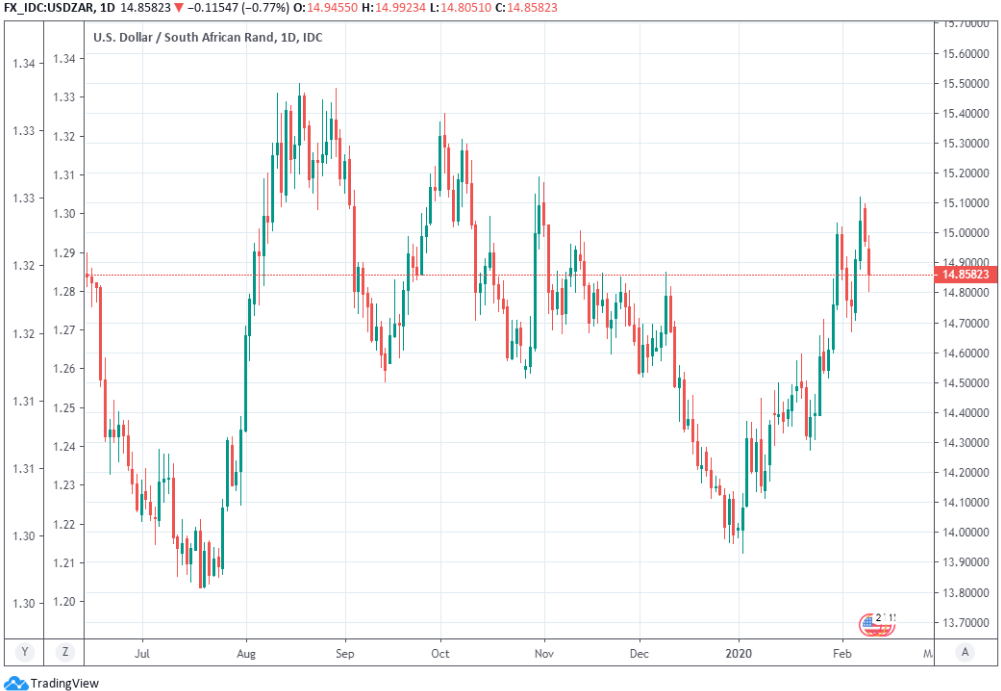 South African government bonds offer some of the highest inflation adjusted returns in the world, which makes them especially attractive to international investors in times when the outlook for global growth is improving.

And with investors having sold the Rand heavily thus far in 2020, they were not going to be deterred from buying it back Tuesday by bad economic data that at least some might have anticipated well in advance of the release.

But some analysts are warning that a stronger Dollar will soon spoil the emerging market party. And others are sceptical that investors will remain sanguine about the risks posed by coronavirus, which has brought China's economy close to a standstill in recent weeks, for much longer.

"Our “take everything at face value” markets are going along with this carefully crafted narrative out of China and so we’re seeing global equities, the Chinese yuan, oil prices and commodity currencies trading higher," says Eric Bregar, head of FX strategy at Exchange Bank of Canada. "We’re not so sure this is anything to celebrate and when you combine it with reports that China’s National Health Commission changed their definition of what constitutes a “confirmed case, the news is even less surprising.” 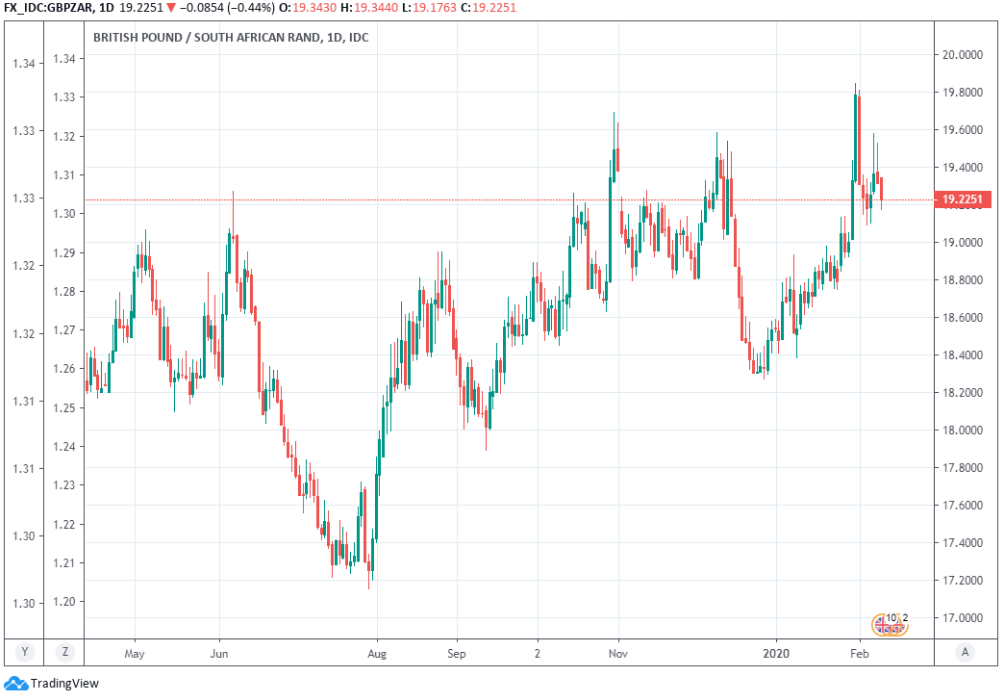 Doubts about the reliability of China's disclosures about the number of coronavirus infections and deaths are not new but have been encouraged this week by reports suggesting that officials have recently changed the definition of what it means to be an infected patient.

Bregar has noted comments from President of the Chinese Medical Association Zhong Nanshan, who said this week the infection "may be over in something like April," before flagging that Nanshan also claimed back in January the outbreak would be dealt with by mid-to-late February.

Similar remarks have been made by President Donald Trump this week and were widely cited by analysts and in the press as cause for optimism.

Coronavirus is crippling the economy of South Africa's largest trading partner at a pivotal point for the Rand, which will take some of its cues from President Cyril Ramaphosa this week as he makes an annual state-of-the-nation address ahead of the February 29 budget from Finance Minister Tito Mboweni.

The February 14 presidential address and month-end budget are the last opportunities for South Africa's government to set out a credible plan for reigning in the budget deficit and stemming an increase in the national debt. Both of which are key to if the country will be stripped of its last remaining 'investment grade' credit rating at Moody's, a loss of which could potentially trigger large outflows of capital from South Africa and more pressure on the Rand.

"The markets will also scrutinize the speech for progress on government’s reform and recovery agenda for 2020," says Shireen Darmalingham, an economist at Standard Bank. "The 2020 Budget in two weeks too will be scrutinized because SA’s fiscus has steadily been deteriorating. Should National Treasury not announce large reductions in spending forecasts in this budget, a ratings downgrade may be on the cards. Indeed, our base case is that Moody’s will strip SA of its only investment grade rating in March."