- But GBP resists advance after election win for Conservatives.

- Though some say a China deal is no gamechanger for ZAR.

The Rand advanced to a five-month high against the Dollar Friday amid speculation that a deal to end the U.S.-China trade war could be announced ahead of the weekend, although it met resistance from a Pound Sterling that’s been boosted by a landslide election win for the Conservative Party.

President Donald Trump has agreed a "limited phase one deal" that will at least temporarily end the trade war between the U.S. and China, according to reports from The Wall Street Journal and range of other publications. U.S. media are reporting the pact could be signed and formally entered into ahead of the weekend although details are scant and Chinese state-run media have at best, issued only a lukewarm response to the claims.

Chinese authorities and official media so far haven’t given any information on China and the US are close to a deal. As the US side released optimistic information through various channels, the Chinse side has basically kept silent. This is a delicate situation.

The White House will cancel the Sunday implementation of a new 15% tariff on all of China's remaining annual exports to the U.S. and reportedly, cut by half the much higher tariff rate on around $360 bn of the world's second largest economy's goods trade with the U.S. And in exchange, China will agree to buy $50 bn of agricultural products from the U.S.

Friday's trade deal, if it actually materialises, would be good news for emerging market economies and currencies but especially those which have meaningful trade relationships with China, like South Africa. After all, the tariff conflict has been at the heart of a global economic slowdown that’s not left the emerging markets unscathed.

That’s why the Rand was up against most major currencies Friday, although it met resistance from a Pound Sterling that’s celebrating a landslide election win for Prime Minister Boris Johnson and his Conservative Party. However, and on its own, some analysts say the China pact is unlikely to be a gamechanger for the Rand beyond the very short-term. 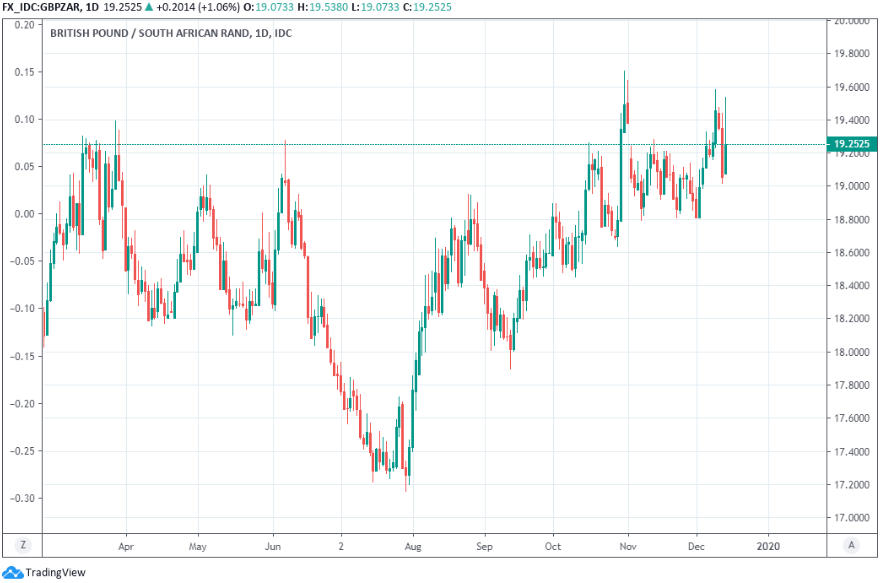 "The overriding force on EM currencies since end-2017 has been slower growth. Trade wars have compounded the growth slowdown (not caused it)," says Jason Daw, head of emerging marker strategy at Sociate Generale. "While Trump will hail a phase 1 deal as a big win, it doesn't appear to address any of the difficult issues that would truly move the needle on trade flows. The spectre of trade war risks should continue to haunt the market ahead of the US election."

President Trump already said on October 11 he'd struck a deal with China that would include not only agricultural purchases, but also cover key issues like intellectual property protections for U.S. companies and financial services, with U.S. banks tipped to be in line for access to the coveted Chinese market.

There was also supposed to be an agreement covering China's handling of its currency, although it's still unclear if any of these are included in the pact that's said to have been agreed.

Societe Generale's Daw says that any trade deal is unlikely to address the real issues between the world’s two largest economies. Others have described Trump’s openness to a deal as being motivated purely by electoral concerns, because he’s up for re-election in November 2020 and a slowing economy could make capturing the White House for a second time more difficult.

“EM FX is a seller's markets. As the economic cycle is nearing its endgame and markets continue to face elevated risks, more EM currency weakness lies ahead. In 2020, EM FX prospects will be hampered by a global and Chinese growth slowdown that is headlined by a US recession, as well as by positioning constraints, and very low carry compensation (2020 outlook),” Daw says. 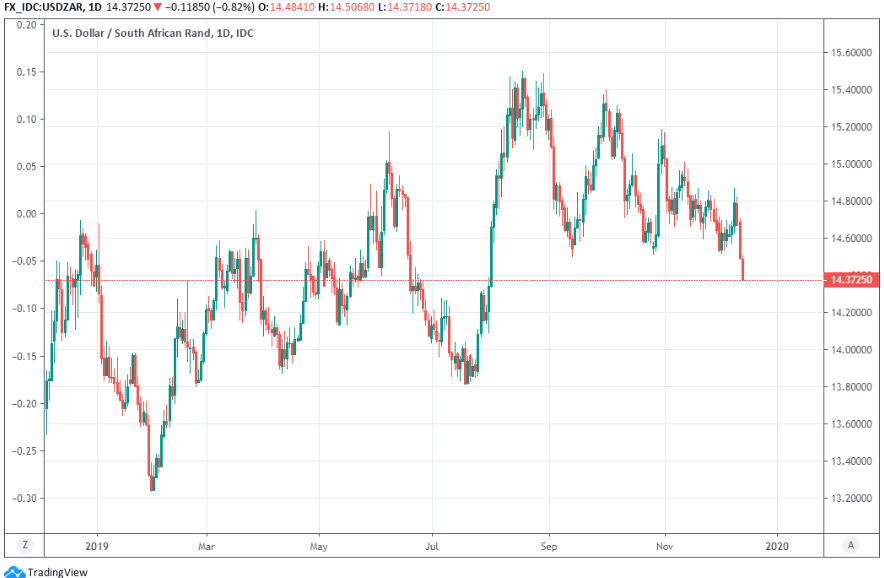 South Africa’s economy shrank by 0.6% in the third-quarter and with load-shedding having picked up at the national power monopoly Eskom in recent weeks, amid signs of an ongoing slowdown in the global economy, expectations for South African growth in the months ahead are all bombed out.

Furthermore, and with or without a U.S.-China deal, South Africa’s economy is facing huge challenges and not least among them - the fight to retain the nation’s last top ‘investment grade’ credit rating. Moody’s wants to see the broken energy provide Eskom and other state-owned enterprises fixed, and the government budget deficit lower. But the global slowdown and weak domestic growth are making it a tall order.

“South Africa is stuck in a vicious circle of low growth, high unemployment and eroding public finances. The unprofitable and debt-burdened state-owned companies (SOEs) constitute a particular burden,” says Elisabeth Andreae, an analyst at Commerzbank. “Higher risk means rising risk premia and thus increased financing cost. We see increasing risk of a downward spiral. Everything all told this might result in some volatile times and considerable depreciation for the rand depending on global risk sentiment.”

Government is facing expenditure pressures on one side that are in part due to Eskom and other SOEs, while seeing a weak economy eroding its tax base on the income side and all at a time when it’s under pressure the preserve the rating. Losing the ‘investment grade’ borrower badge awarded by Moody’s, which will announce its next decision in February after the budget, is something that analysts say could lead to large outflows from the Rand.

And it’s the ever-present threat of those outflows that limits the upside potential for the Rand, even if Friday does see the U.S. and China shake hands on a temporary end to the tariff fight.