- After President Ramaphosa tells of "sabotage" at Eskom.

- Load-shedding stops between December 17 and January 13.

The Rand was buoyant Wednesday amid steady Dollar exchange rates and after President Cyril Ramaphosa revealed that "sabotage" was behind the recent load-shedding at Eskom that brought some parts of the economy to a standstill this week, although some say the discovery is unlikely to be a gamechanger for South Africa's economy or currency.

President Cyril Rampahosa told a press conference Wednesday that Eskom employees have been suspended after it was discovered that Tuesday's "stage 4" load-shedding was partly the result of deliberate sabotage.

He said some of this week's load-shedding, which sees the country subjected to rolling blackouts in order to prevent a meltdown of the national grid, was the result of adverse weather but also that an act of sabotage had cost the ailing electricity monopoly 2,000 Mw of generating capacity.

President @CyrilRamaphosa addresses members of the media on conclusion of #Eskom visit https://t.co/mi5q32UWTn

Sabotage accounted for half of the 4,000 Mw of capacity that had to be dumped from the grid, or the service that was lost, on Tuesday. That 2,000 Mw of capacity is equal to almost 10% of total South Africa's daily demand for electricity, according to a report from Business Day, and it's not yet clear whether or not similarly subversive acts could be behind the dire condition of some of the company's other bits of kit.

There will no longer be any load-shedding between December 17 and January 13, Ramaphosa said following a meeting with the company board, which is good news for South Africa's already-troubled economy because the resulting blackouts can be disruptive to industries like mining and manufacturing that rely on having access to electricity, not to mention consumers. However, Eskom was still implementing "stage 2 rotational load-shedding" on Wednesday. 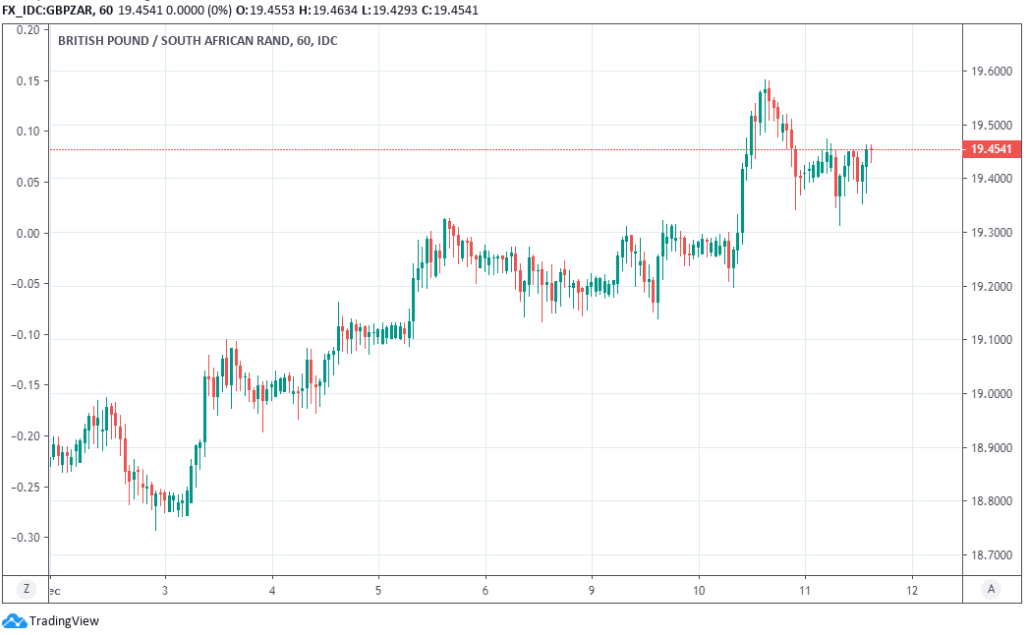 "Markets have become accustom to the temporary lulls in electricity provision. This is likely to continue, sabotage or no-sabotage, into the near future until the initial payments from the government’s balance sheet to Eskom are pumped into replacing depreciating capital," says Simon Harvey, an FX analyst at Monex Europe. "Only sustained periods of a halt in production, due to more structural reasons, will move the needle like it did back in Q1."

The Rand's agitation over the Eskom woes appeared to rise Tuesday, with local media awash with details of how the nation's largest diamond miner had been forced to stop work at mines affected by the loss of power, presumably because of the possible impact on the economy. South African GDP already fell 0.6% in the third quarter so any continued weakness might risk a second technical recession in as many years.

Eskom had this week resorted to using some of the most severe rolling blackouts in order to avoid a failure of the grid, with the company saying the measures are necessary due to a “shortage of capacity with a number of generating units due to breakdowns.” Load-shedding had already been ongoing for several days but was previously of a less severe nature. It's set to continue until at least 23:00 Wednesday. 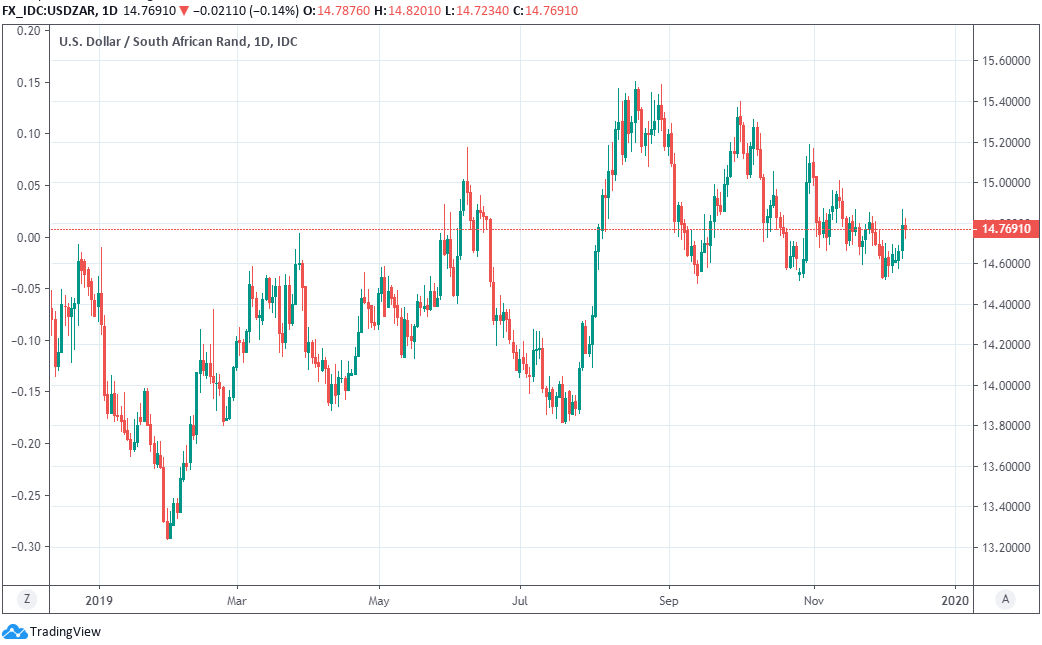 "Fortunately, we did not see a repeat of Monday’s stage 6 load-shedding yesterday...The rand’s relatively tame response to the implementation of stage 6 on Monday turned more realistic yesterday," says Siobhan Redford, an economist at Rand Merchant Bank. "The costs are not just a couple of hours in the dark for the South African consumer, but include threats to employment, safety and access to service delivery."

Years of underinvestment, mismanagement and corruption have seen Eskom’s generating capacity decay to an extent where it’s often no longer able to keep the country’s lights on. And with the company unable to service its mammoth debt pile from its revenues, and the government on the hook for a substantial part of that liability, the company is the single largest threat to South Africa’s only ‘investment grade’ credit rating.

Fixing sickly state-owned companies like Eskom is high on the wish-list of Moody’s, the last major agency to still rate South Africa an ‘investment grade’ prospect, although it also wants a credible plan from the government for reducing its budget deficit and stemming the increase in national debt. Government is facing expenditure pressures on one side that are in part due to the demands of Eskom and others, while seeing a weak economy eroding its tax base on the income side. Moody’s will announce its next decision in February, weeks after the 2020 budget.

Wednesday's price action came amid stability in the Dollar Index, low volatility and as markets demonstrated an appetite for so-called risk assets. Those kinds of conditions are ordinarily supportive of 'carry trades' that often favour high-yielding emerging markets currencies, while the Rand is itself a 'risk asset'. 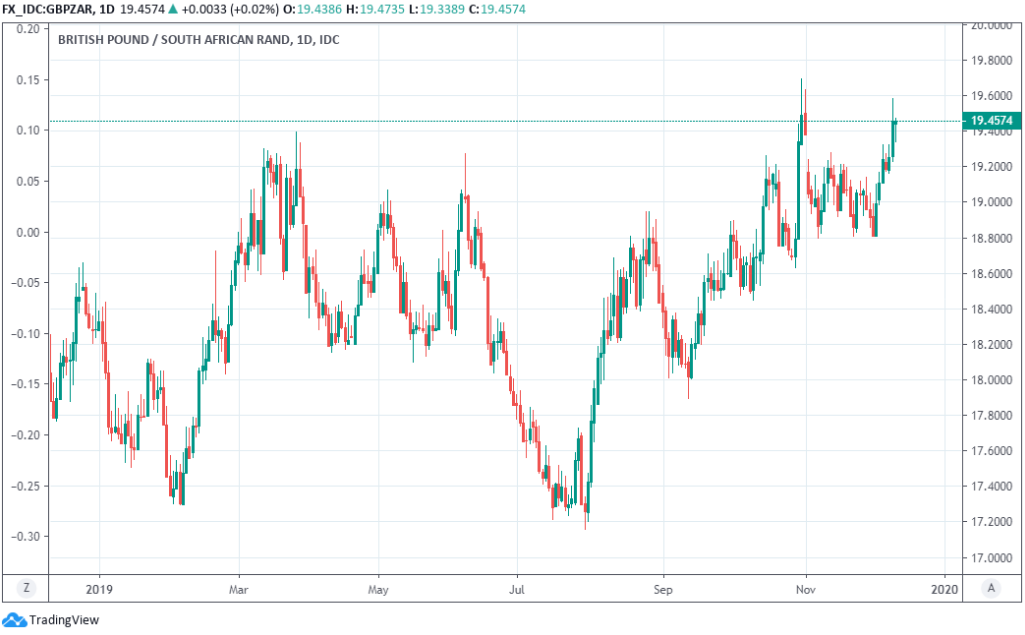