- More upside is dependent on break above August high

- Rand to be driven by trade talks outcomes

The Pound-to-Rand exchange rate is trading at around 18.78 at the time of writing, up half a percent on the day and up 0.90% on the previous week's close.

Studies of the charts continue to show the pair consolidating beneath tough resistance from a major trendline which could ultimately cap gains. 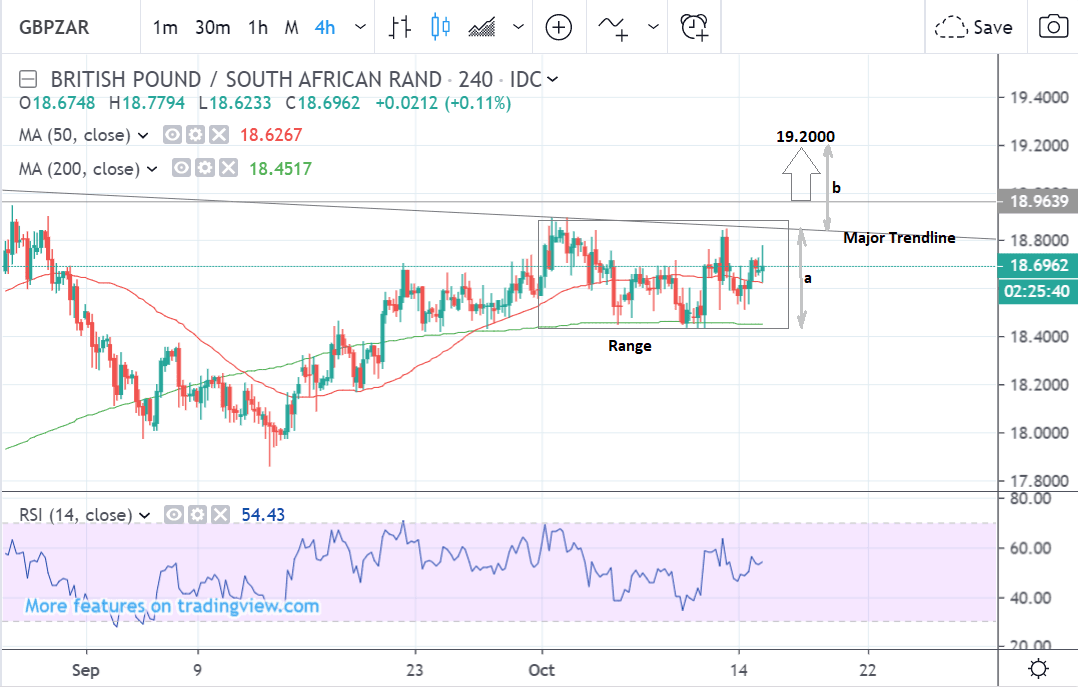 The 4hr chart - used to determine the short-term outlook which includes the coming week - shows the pair trading sideways underneath resistance from a long-term trendline.

This sideways trend could continue in the near-term but equally, there is a possibility that it could break higher in line with the trend prior to the start of the range.

If it broke significantly above the trendline, confirmed by a move above the August highs at 18.95, that would provide the green-light for a continuation up to a target at 19.20, based on the height of the range (a) extrapolated higher (b).

The trendline remains a tough nut to crack, however, so a break higher whilst possible is not guaranteed.

The daily chart shows another possible interpretation of the price action, one in which the pair might be forming an ABCD pattern, or ‘measured move’. 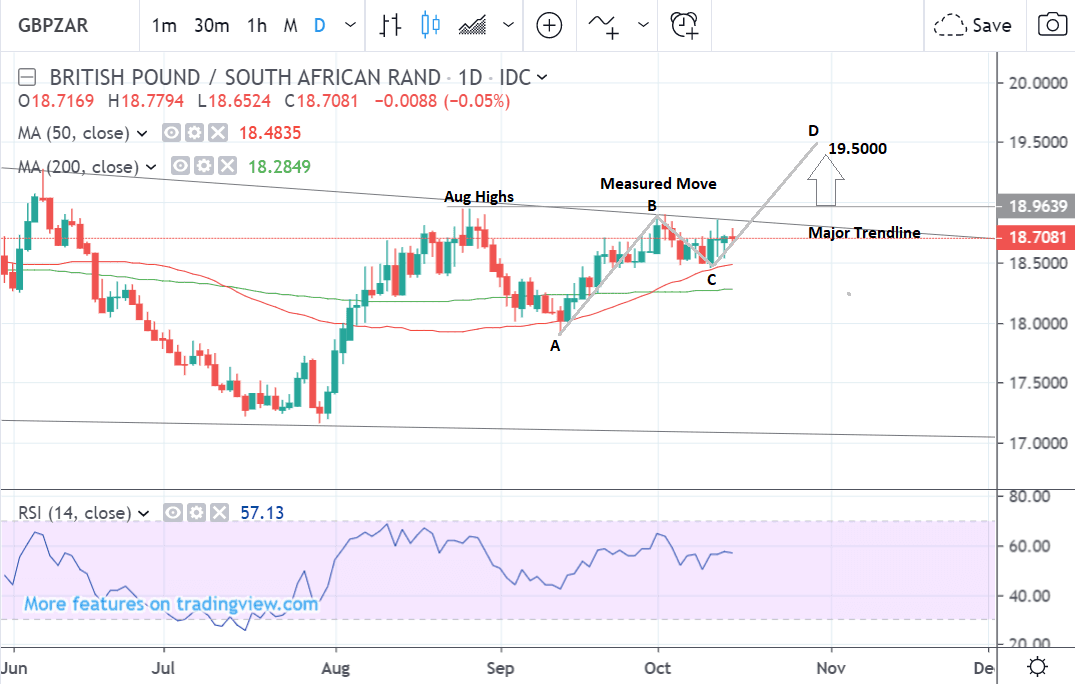 Such an interpretation suggests a bullish outlook since the final C-D wave is likely to take the exchange rate up to a target at 19.5000.

That would suggest a breakout above the major trendline which would require a clear break above the August highs for confirmation.

The weekly chart shows how the pair continues to trade within a large pattern which looks like a falling wedge or channel. 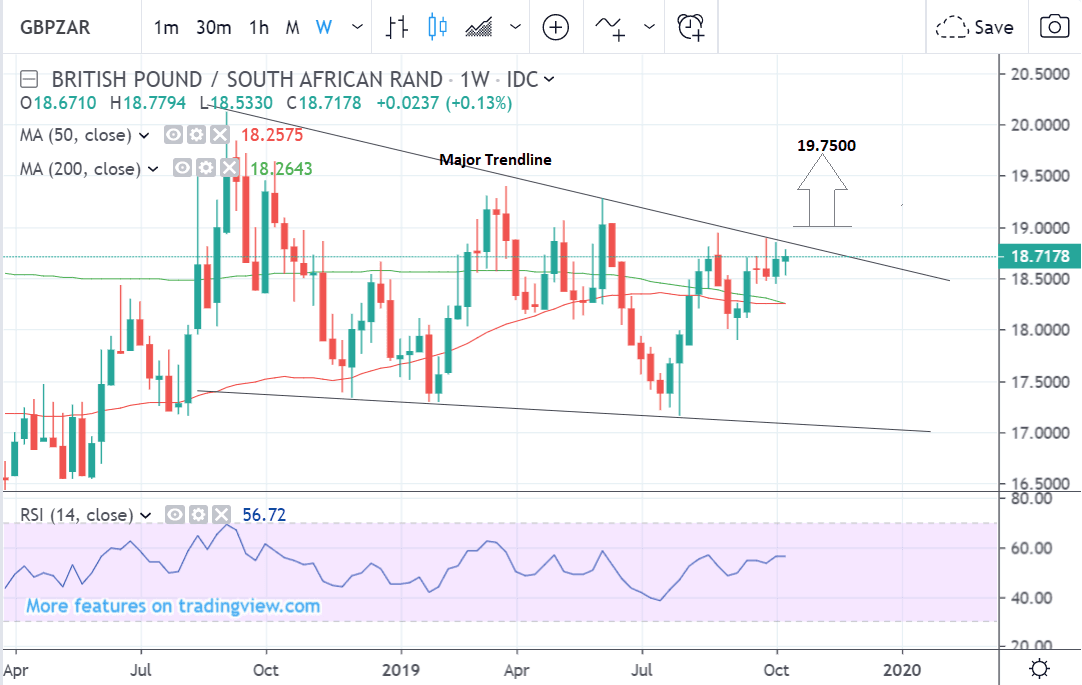 A breakout higher would, therefore, be a major bullish event and suggest a probable continuation up to a target at 19.7500.

A break clearly above 19.00 would provide confirmation.

The South African Rand: What to Watch

The main drivers of the South African Rand in the week ahead are likely to be global risk trends and the value of the U.S. Dollar - to which the Rand is negatively correlated.

After a positive end to last week on the back of hopes of both a trade deal between the U.S. and China and a Brexit deal in Europe, global risk sentiment appears to be moderating as markets await more concrete confirmation.

China and the U.S. have yet to sign on the dotted line of their trade truce and until they do phase 1 cannot begin.

Likewise, with Brexit talks, though both sides said progress had been made, a firm deal is still not on the table and time is running out before the mechanisms start to activate to prevent a ‘no-deal’ on October 31 (the Benn Act) and seek an even longer extension.

Michel Barnier, the EU’s chief negotiator, poured cold water on hopes of an easy win today (Tuesday) when he was reported as saying that the UK’s proposals are still not enough.

Yet with both China and Brexit there is hope of a breakthrough which would send emerging market (EM) currencies like the Rand substantially higher - albeit versus the U.S. Dollar and safe-havens since the Pound would also skyrocket on news of a Brexit deal.

The U.S. Dollar appears to have traded broadly like a safe-haven in relation to trade talk news, actually falling marginally on last week’s good news due to a drop in safe-haven flows.

On the 'hard' data front, the next major release is Chinese Q3 GDP which is forecast to show a slowdown in growth to 6.1% when data is released at 3.00 BST on Friday.

A deeper contraction would sour the outlook for global growth and hit the Rand as well as other EM currencies; alternatively, a better-than-expected result would support the Rand and EM FX.

Judging from trade and inflation data the outlook does not particularly favour a bullish surprise in GDP.

Trade data showed a bigger China trade surplus in September which on the face of it is positive, however, look under the bonnet and you will find gross trade actually fell.

CPI overshot expectations and hit 3.0% which is the PBoC target, again, on the face of it a positive outlook, however, this was almost entirely due to massive inflation in pork - a Chinese dietary stable - due to shortages, and not as a result of increased general demand from greater prosperity.