- But others eye risk Powell neglects to indulge market and Trump.

The Rand is on the backfoot ahead of Friday's landmark speech from Federal Reserve Chairman Jerome Powell that will set the mood for South Africa's currency in the coming weeks.

South Africa's Rand had begun to recover its poise in recent days after week's of fresh losses, but those gains melted away on Thursday and Friday as the Dollar drew support from concerns over whether Fed Chairman Jerome Powell will indulge investors and President Donald Trump by signalling that a significant reduction of U.S. interest rates is on the way.

Many analayst fear Powell will disappoint investors and the White House, which would be bad news for emerging market economies and currencies that tend to struggle in an atmosphere of U.S. Dollar strength. Higher U.S. interest rates meanwhile have significant implications for global businesses and economies that have debt denominated in Dollars. Lower interest rates at the Fed would prove supportive to the likes of the Rand.

Markets were pricing-in close to three Fed rate cuts for the rest of this year on Wednesday while President Trump has recently called for four cuts, or a 1% decline in the Fed Funds rate that now stands at 2.25% after already being reduced in July. However, analysts increasingly doubt the Fed will be willing to deliver those cuts and with Powell delivering a speech during the opening ceremony of the Jackson Hold Symposium at 15:00 Friday, there's a risk his words could force markets to rethink their bets.

"After some initial gyration following the release of the FOMC Minutes yesterday, market participants voted to unwind the “Fed rate cut trade” a little further ahead of tomorrow’s speech from Jerome Powell at Jackson Hole," explains Erik Bregar, head of FX strategy at Exchange Bank of Canada. 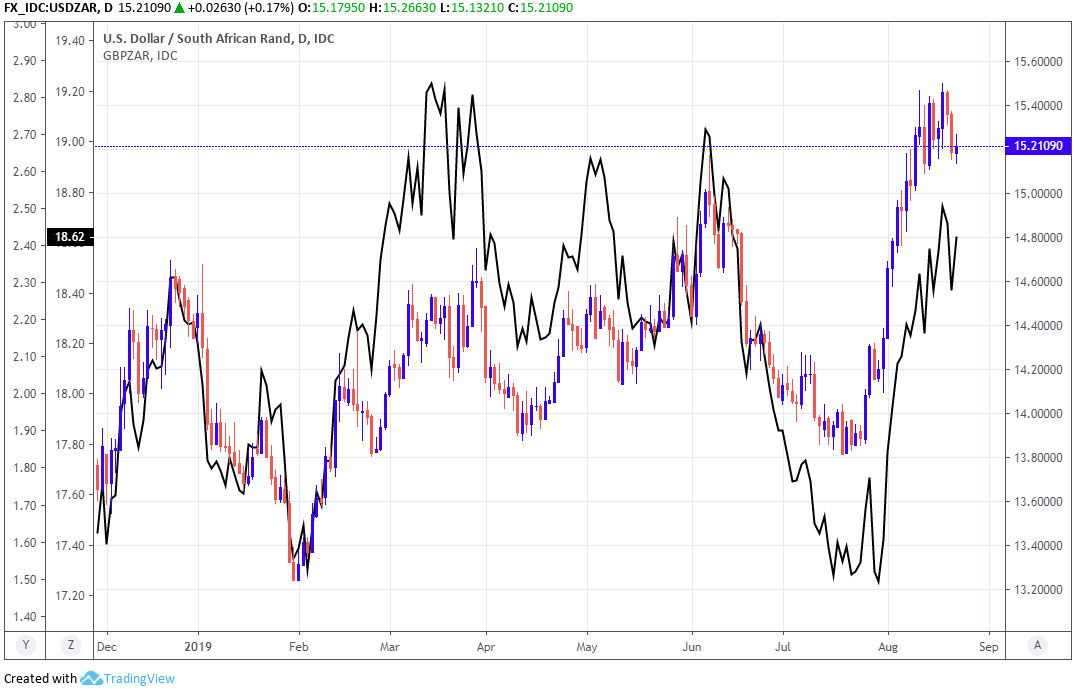 Markets are increasingly moving against the South African Rand, which tends to suffer with other emerging market rivals whenever the Dollar strengthens. And the Dollar was truly on the march Thursday having risen against all G10 rivals other than the Yen and Pound. Stock markets were broadly lower and U.S. bond yields moving higher.

"Trading was relatively thin on Asian markets today in anticipation of the guidance expected to be delivered by Jerome Powell at the Jackson Hole Symposium. As there are no data releases today, we can expect local markets to follow the global trend and, barring any surprises, the rand to continue at levels that have dominated the second-half of the week," says Siobhan Redford, an economist at Rand Merchant Bank.

The U.S. 10-year yield was up Thursday, although its two-year counterpart had risen faster and further to once again sit above that of some longer-dated peers in a process known as 'yield curve inversion'. Downward sloping yield curves, even if only modestly downward sloping, are often seen by investors as harbingers of recession. Fears of a recession in the U.S., or of an accelerated global downturn, are also bad news for riskier emerging markets and positive for 'safe-haven' currencies like the Dollar and Yen.

Bond yields were up again on Friday but this time the 10-year was higher than the two year, with the curve having normalised. However, things might not stay like that for long if Powell neglects to assuage market fears over the U.S. and global growth outlooks with hints of rate cuts to come.

"The rand could remain closer to USD/ZAR15.00 on the continued expectations for a September Fed cut, and the increasing expectation that the SARB will keep rates on hold in September, thereby increasing the interest rate differential in the rand’s favour," Redford says.

The Rand has so-far held close to the 15 level against the Dollar, trading around 15.15 during the noon session Thursday, but Powell's address is not until 15:00 Friday and many warning the Dollar could remain on its front foot. Others are also warning of an even stronger Dollar if the Fed's most senior banker disappoints a market that is betting heavily on a substantial change of course from the U.S. central bank over the coming months. 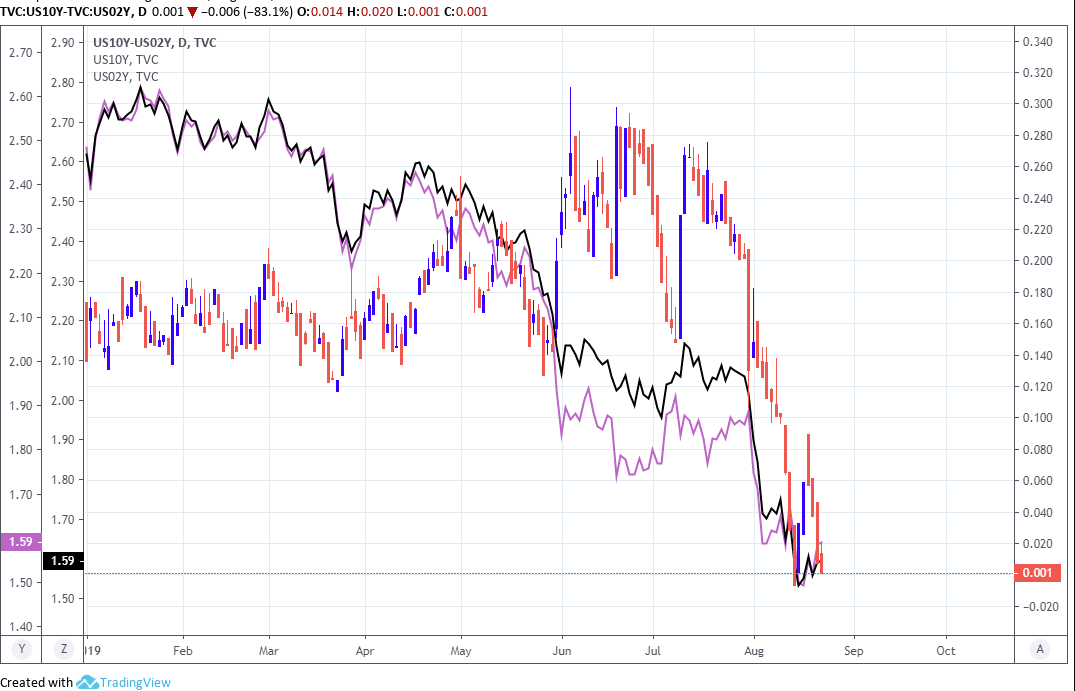 "As the global environment has clearly deteriorated since the July FOMC meeting (US imposing more tariffs on China, weaker data abroad) market participants are hoping for a more pronounced dovish shift. Unless this is delivered, and given the ongoing trade war overhang, the cyclical G10 currencies and emerging market FX are set to struggle while USD is set to stay bid (benefiting from a not overly dovish Fed– vs market expectations – and solid US domestic data –relative to other major economies)," say Petr Krpata at ING.

Bond markets fear the Fed won't deliver the full number of interest rate cuts that they already took to the bank a long time ago, which was reflected by an upward adjustment to short-term bond yields that was greater than that seen over longer maturities and formed the main driver of Thursday's yield curve inversion. However, that's not the first time the U.S. yield curve has inverted this year because it also briefly became downward sloping last week.

Yield curves have inverted and fears for the global economy risen ever since President Donald Trump said in early August that he intends to impose a 10% tariff on all of China's exports to the U.S. that are not yet covered by punitive levies. Some tariffs are scheduled to go into effect on September 01 and the rest on December 15, which will mean substantially all of China's trade with the U.S. is encumbered by one levy or another.

However, and for its part. the U.S. economy has held up well when compared to peers elsewhere. Economic figures have consistently suggested the consumer has not been deterred by either the trade war with China, or the four Federal Reserve rate hikes announced in 2018, which is a big reason why markets are conscious that Powell could well disappoint on Friday.

"The risk is that, given the extent of market expectations for easing over the next 12 months, Chair Powell could again come across as more hawkish and encourage a stronger dollar," says Lee Hardman, a currency analyst at MUFG.