"Our short-term model has been signalling that the yen was more significantly overvalued based on the 10-year JGB yields remaining below 0.50%" - MUFG.

The Japanese Yen was sold heavily in mid-week trade while Sterling was bought selectively, helping GBP/JPY to outpace USD/JPY in a climb to the upside after the Bank of Japan (BoJ) spurned a speculative market with a decision to leave its monetary policy unchanged for January.

Japanese exchange rates were swept lower on Wednesday with losses of more than two percent in some cases after the BoJ left recent speculative buyers of the Yen holding a heavy bag when announcing no further adaptation of its Yield Curve Control policy in the first policy decision of the year.

The 10-year yield target was left at 0% while the recently-widened band within which the yield is allowed to fluctuate was also maintained at 50 basis points on either side of the target, which is intended to reinforce the effect of a still-negative benchmark interest rate that remains at -0.1%.

"Beyond the immediate policy decision, we think the key message is in the BoJ FY 2023 and 2024 inflation forecasts, the latest being the bold red line in the chart," says Adam Cole, chief FX strategist at RBC Capital Markets.

"The BoJ now has CPI ex-fresh food at 1.6% in 2023 (unchanged from previous forecast) and 1.8% in 2024 (0.2% points higher). There had been some suggestion in local media that both could move up to the 2% target, so this is disappointing in terms of the prospect for imminent normalisation," he adds following a review of the decision and latest economic forecasts. 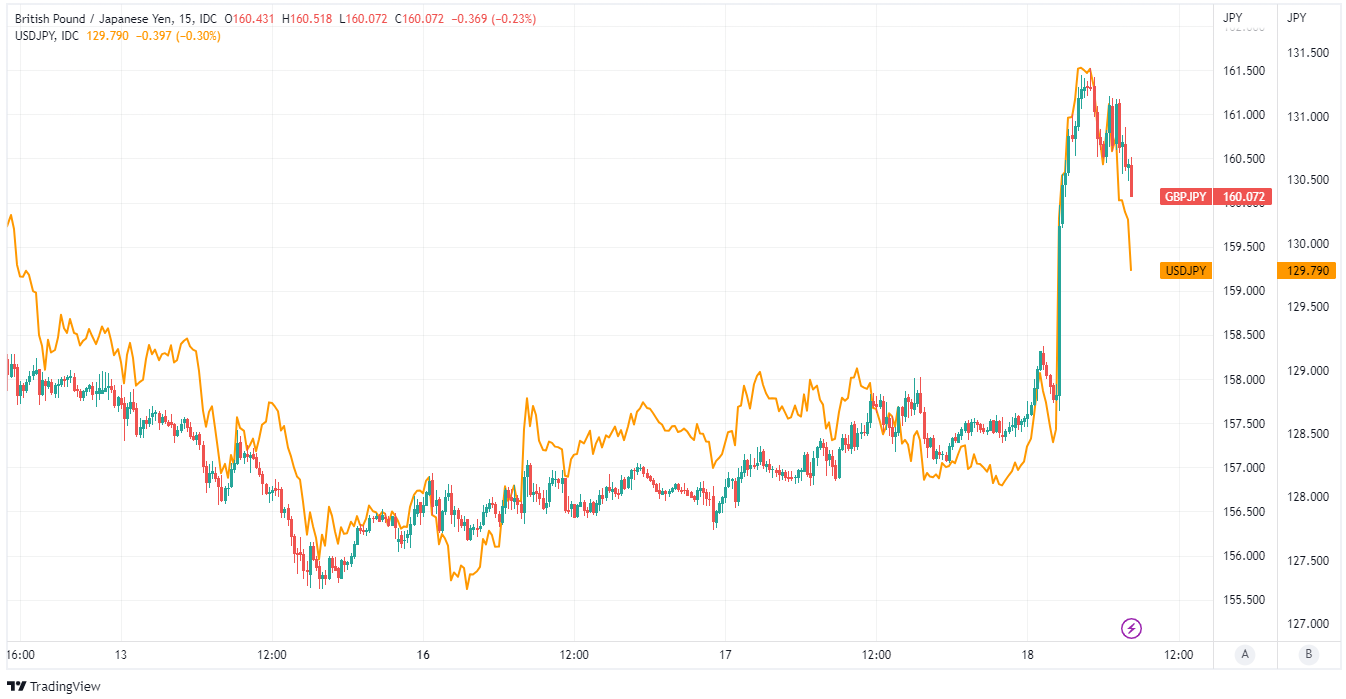 Above: GBP/JPY shown at 15-minute intervals alongside USD/JPY. Click image for closer inspection.

The BoJ had surprised the market in December with a decision to widen the band within which the 10-year government bond yield floats and although the move was described as being intended to make the bank's overall loose monetary policy more sustainable, the market took a different view.

December's decision gave way to speculation about a possible tightening of monetary policy along the lines of that seen elsewhere in the world over the last year and this speculation was encouraged further with press reports suggesting the Yield Curve Control policy could be reviewed again in January.

"The scale of the initial sell-off is broadly in line with our expectations for a 2-3% decline for the yen if the BoJ left policy settings unchanged. There is a risk though that the yen sell-off could still extend further in the near-term," says Lee Hardman, a senior currency analyst at MUFG, Japan's largest lender.

"Our short-term model has been signalling that the yen was more significantly overvalued based on the 10-year JGB yields remaining below 0.50%," he adds following a review of the BoJ decision and forecasts.

The BoJ decision was followed by Office for National Statistics (ONS) data suggesting UK inflation did not fall as far in December as economists anticipated with prices growing at an unchanged 6.3% after food and energy items are removed from the basket of goods for which prices are analysed. 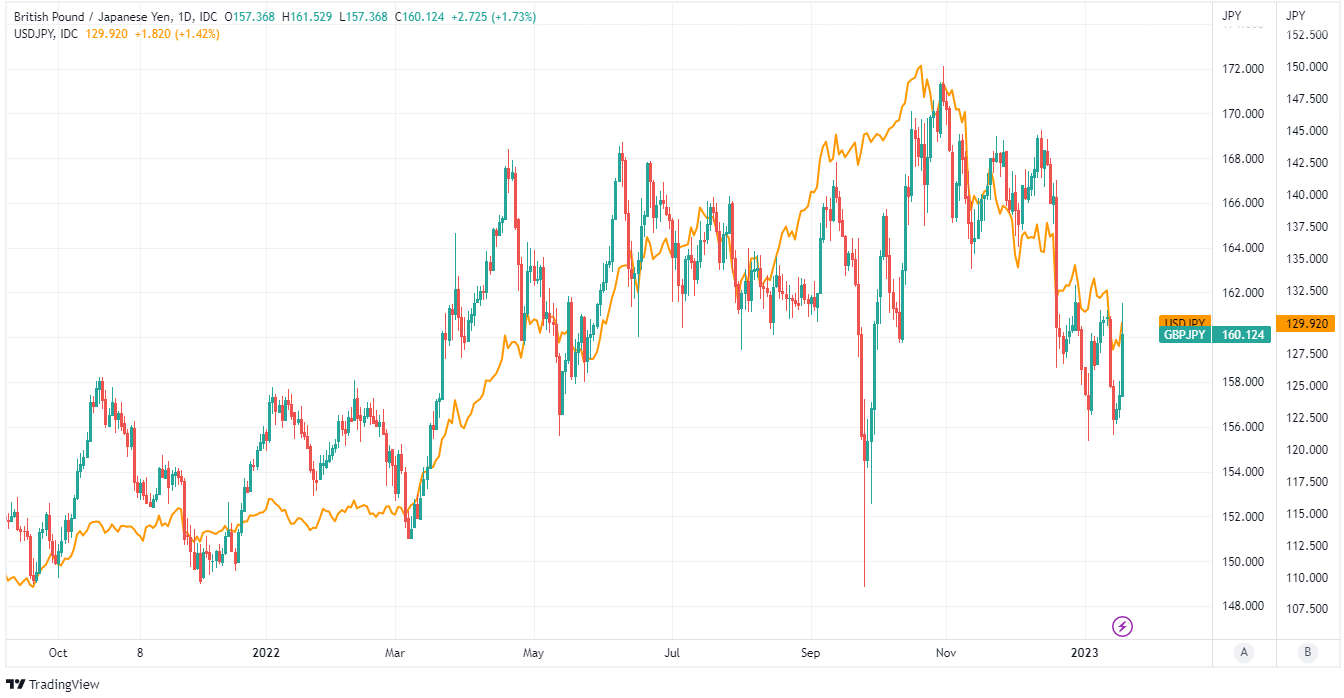 Above: GBP/JPY shown at daily intervals alongside USD/JPY. Click image for closer inspection. If you are looking to protect or boost your international payment budget you could consider securing today's rate for use in the future, or set an order for your ideal rate when it is achieved, more information can be found here.

The overall UK inflation rate declined from 10.7% to 10.5% but in light of the core inflation figure and other recent data emerging from the ONS, Wednesday's price numbers might have been seen as little consolation at the Bank of England (BoE).

"The near-term pace of price rises continued to slow in December, creating some of the necessary conditions for the MPC to stop hiking Bank Rate in the spring," says Samuel Tombs, chief UK economist at Pantheon Macroeconomics.

"Looking ahead, we expect the headline rate of CPI inflation to decline to about 9.0% in March, as the fall in commodity prices and shipping costs over the last six months works its way through to prices for food and core goods," Tombs writes in a review of the data.

Tombs and colleagues forecast further falls in UK inflation over the coming months with the main rate of price growth coming down to 8.5% in April despite another planned increase in household energy costs, and they also look for the core rate of inflation to be nearing the BoE's 2% target by year-end.

Wednesday's price data follows other figures out on Tuesday suggesting that pay growth for workers had accelerated again in the final quarter of last year while last week, GDP data indicated the economy has not deteriorated to the same extent envisaged in the BoE's November forecasts.