The Yen is tipped to fall further by a number of institutional analysts we follow, with the 1990 lows now seen as a distinct possibility.

The decline against the U.S. Dollar and all other G10 currencies comes as monetary policy divergence dolomites investor attention, particularly following the Jackson Hole Economic Symposium of late August.

It was here that the Federal Reserve's Jerome Powell doubled-down on a commitment to raising interest rates to stem inflation, boosting U.S. bond yields.

But expectations for higher interest rates at all other central banks also rose, except for the Bank of Japan. The following chart sums up the story facing the yen: 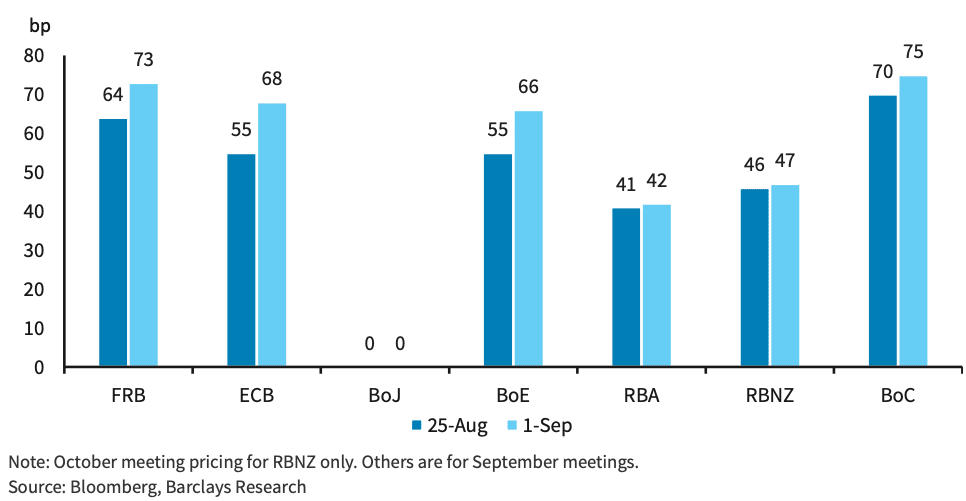 Above: Money market expectations for the size of various central bank hikes due in September. The chart shows how central banks have become more hawkish since the Jackson Hole Symposium at the end of August. Image courtesy of Barclays.

"The barrage of hawkish Fed rhetoric post-Jackson Hole, retreat in US recession risk, and apparently unwavering dovish commitment from Kuroda, leave USD/JPY hostage to what has been an enduring theme this year: policy divergence and continued widening in yield spreads," says Meera Chandan, FX Strategist at JP Morgan..

"USDJPY has smashed through our 140 target and our original end-Q3 range top at 142, is now easily on course to reach 145," says Shahab Jalinoos, Global Head of FX Strategy at Credit Suisse.

"We suspect that many diehard 'faders' of USDJPY on approaches to 140 have had to throw out their old rule books and rush for cover," says Jalinoos.

Arguments for fading the Yen's selloff often rest on the belief Japanese authorities will directly intervene in the market to defend the currency.

"Verbal intervention by Japan’s MoF warrants some attention, but actual intervention is unlikely, in our
view," says Shinichiro Kadota, an analyst at Barclays.

The Dollar-Yen exchange rate surged to a new 24-year high at 144.492 midweek as the market continued its punishment of the low-yielding yen.

"USD/JPY’s break above the 140 level—our longstanding target—has put paid to the notion that we had already seen cycle highs for the pair," says Chandan. 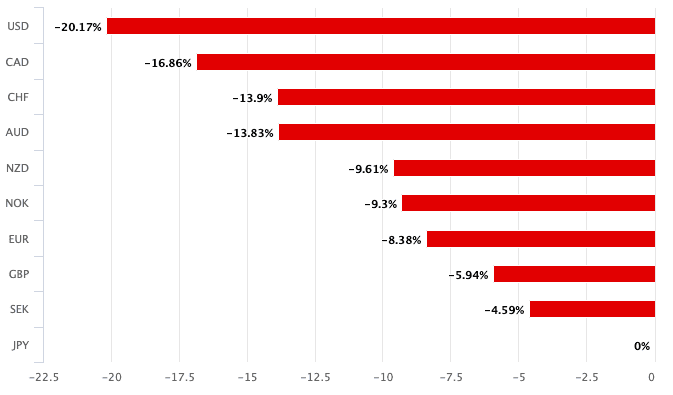 "We think the risk now looks skewed toward another scrape higher in USD/JPY, bringing the pair to the low-to-mid 140s and we would not rule out an eventual extension toward the 1998 high of around 147," adds Chandan.

The yen's decline could meanwhile come against a host of other currencies, not just the Dollar.

"Policy divergence is no longer a US-centric phenomenon; JPY is fast becoming the world’s only zero-yielding currency," says Chandan.

This places further upside potential in the Pound to Yen exchange rate on the cards.