“Given the business cycle has shifted to a late cycle slowdown phase from the "go-go" expansionary phase of 2021, long JPY exposure remains an attractive cross-trade over the medium term,” - TD Securities.

The Yen fell heavily against all currencies in a torrid first half of 2022 but has traded on a firmer footing more recently and could have scope to further outperform both the Pound and Euro in the months ahead, according to strategists at TD Securities and Nomura, who tip the Japanese currency as a buy.

Japan’s Yen took double digit losses against many currencies during the opening half of the year as the related central banks set out plans to lift interest rates in order to combat inflation that has reached generational highs in many countries during recent months.

The Bank of Japan (BoJ) and its steadfast commitment to using monetary policy in order to support the Japanese economic recovery from the pandemic played a role in driving those losses too but recent weeks have seen markets reconsider the outlook for central bank policies and the global economy.

This in turn has implications that may mean the Japanese Yen is close to turning a corner against some currencies.

“We would look to fade USDJPY rallies towards 136 in the weeks ahead and like long strategic JPY exposure against some European currencies (like EUR and GBP),” says Mark McCormick, global head of FX strategy at TD Securities. 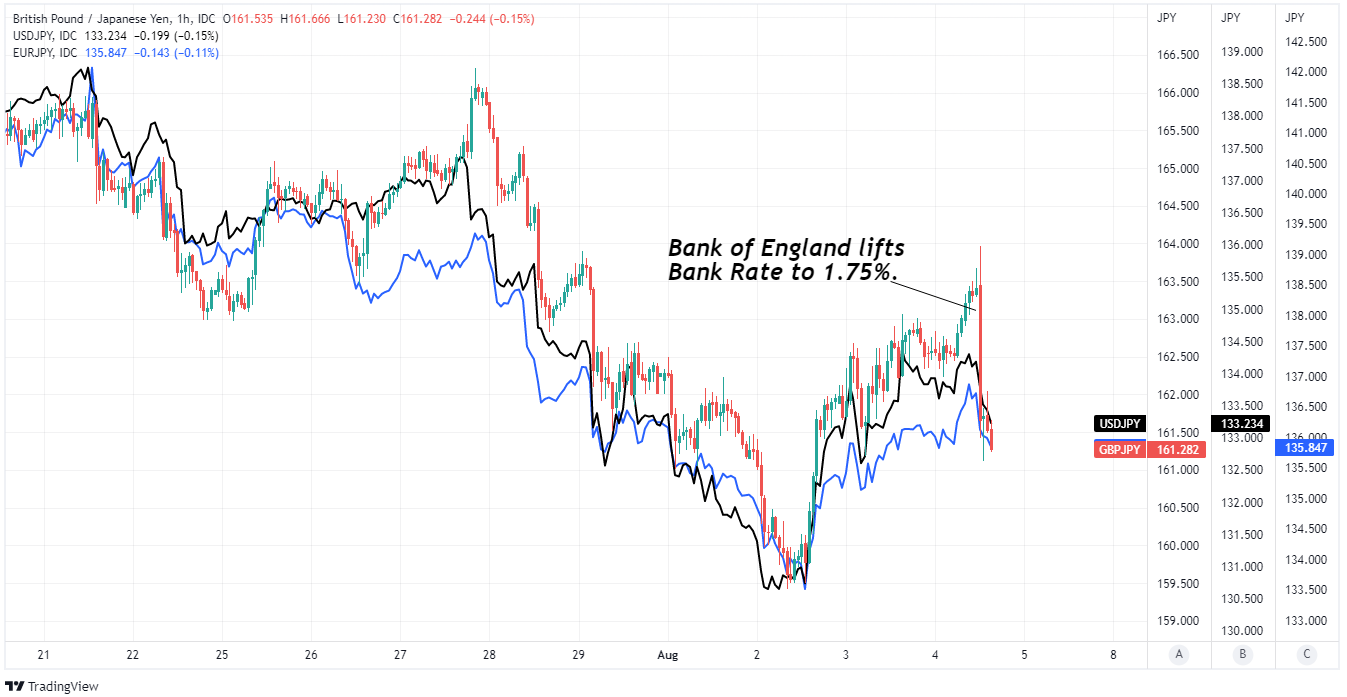 Above: Pound to Yen rate at hourly intervals shown alongside USD/JPY and EUR/JPY. Click image for closer inspection.

“Given the business cycle has shifted to a late cycle slowdown phase from the "go-go" expansionary phase of 2021, long JPY exposure remains an attractive cross-trade over the medium term,” McCormick said on Wednesday.

This uses ‘principle component analysis’ to identify which out of various common influences can explain the behaviour of a collection of other variables like financial markets or asset prices.

“PC1 (first factor) accounts for 64% of the data, while PC2 and PC3 account for 16% and 10%, respectively. But how do these factors tie back to the market? The first factor currently links most closely with the US 10y nominal rate,” McCormick and colleagues wrote in a research briefing.

Economic data coming from many of the world’s major economies has soured of late and Federal Reserve monetary policy has been a significant driver of U.S. government bond yields, which have weighed heavily on the Yen this year but also led markets to anticipate a deepening of the global slowdown underway. 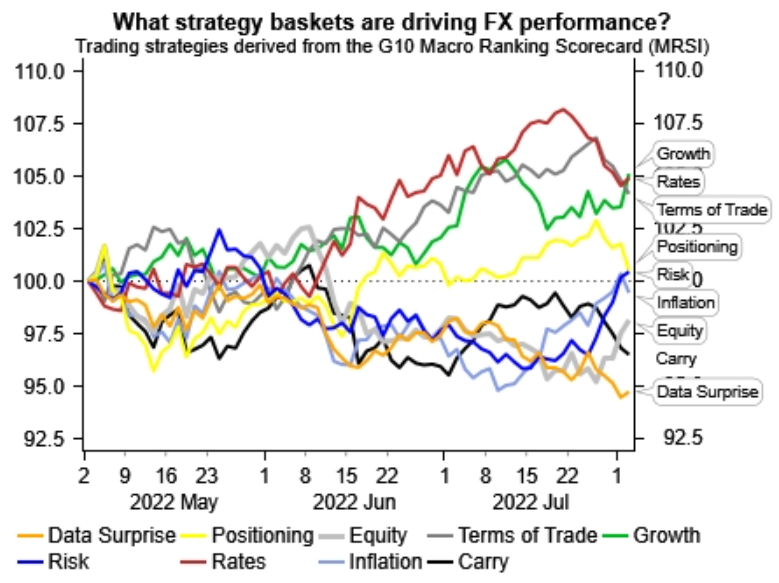 The immediate impact on U.S. bond yields when the Fed’s evolving policy guidance led financial market expectations for U.S. rates to shift was a heavy burden for the Japanese Yen but the second round effect of a more rapidly deteriorating global economy has been kinder.

"European growth and inflation signals are deteriorating faster than in the US, and this is not reflected in ECB or BoE pricing when compared with the cuts priced for the Fed. This winter Europe may set historical records if Germany has to ration its gas usage in industry, and energy prices in Europe are already 5-7x higher than in the US,” says Jordan Rochester, a G10 FX strategist at Nomura.

"Our conviction is lower, with markets more willing to price in a dovish Fed narrative. This is why we have put back our target in GBP/USD to reach 1.15 by end-September from August previously. But for those looking to avoid USD long exposure, we believe short GBP/JPY and GBP/CHF are [relative value] trades worth exploring,” Rochester wrote in a Monday research briefing.

Market concerns about the global and U.S. economic growth outlook have been one of the multiple factors driving U.S. bond yields lower in recent weeks and enabling the Japanese Yen to climb against many other currencies.

These are each and all reasons why the TD Securities team is joined by Nomura in its preference to sell the likes of Sterling and the Euro to buy the Yen instead. 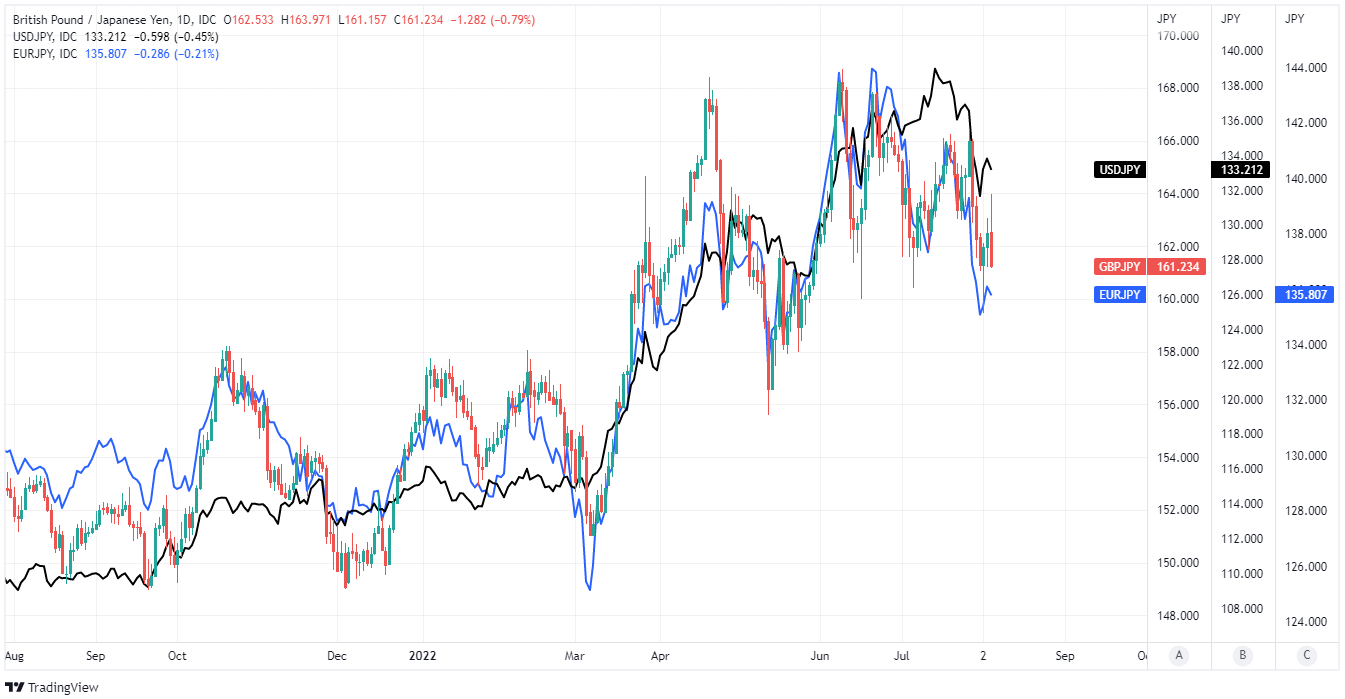 Above: Pound to Yen rate at daily intervals shown alongside USD/JPY and EUR/JPY. Click image for closer inspection.

While global factors are already burdensome for Sterling and the Euro, the UK and European economies also face challenges of their own.

“Selling EUR isn’t a difficult view to explain — a recession, energy crisis and slowing trade with China make a short EUR view clear to us. However, arguing why investors should buy USD has become a little harder with the market pricing-in 75bp in rate cuts next year and prices paid in the ISM falling hard,”  Rochester said on Tuesday this week.

“This is why short EURJPY is a clearer trade in our view, with the risk of falling US yields and a stronger JPY. We remain short EURUSD, looking for 0.975 (previously 0.95) by end-September (previously end-August), but on Friday we lowered our conviction in the trade to 3/5. Today we enter a fresh short EURJPY position with a conviction of 4/5,” he added.

Energy costs are driving steep declines in incomes in both UK and European economies although in the latter supplies are also in jeopardy despite the high prices, and the continental economies are also at risk from a slowdown underway in trade partner China's economy.

This, the resulting risks to the Euro and prospects of a better performance by the Japanese Yen are all among the reasons why the Nomura team advocated this week that institutional clients consider selling the EUR/JPY rate. 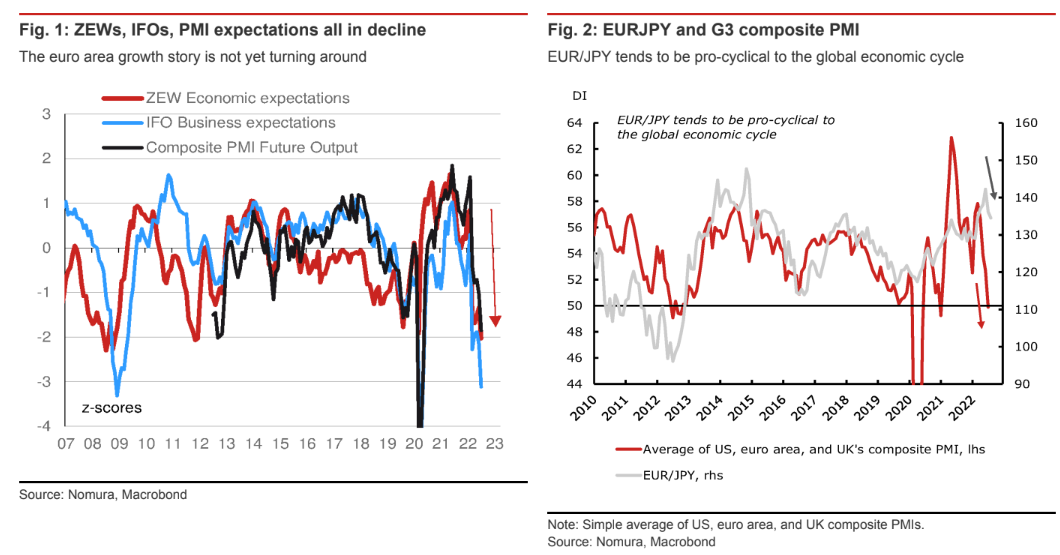