- Yields, virus worries & ‘position clearout’ said to prompt JPY rally
- GBP/JPY targeting 200-day average at 146.57 says Commerzbank
- Warns of further declines as USD/JPY seen on course for 106.74
- Could push GBP/JPY to 144.00 or below amid softening of GBP

The Japanese Yen became the major currency outperformer for July this week but has been widely flagged as having the legs to rise further over the coming days and weeks in price action that would see GBP/JPY at risk of a setback as far as the 144.10 level.

Japan’s Yen was cooling its heels on Tuesday but remained the best performer in the G10 segment of the major currency pool for the week and month even after the Dollar assumed the lead for 2021 from a suddenly beleaguered Pound Sterling.

“The purported driver of the weakness in risk sentiment is the resurgence of Covid, but an increasingly complacent market was always going to be poorly prepared for a spike in volatility, one that in FX is sending the usual twin wrecking balls of the USD and JPY swinging but with risk of the fallout worsening further before the move exhausts itself,” says John Hardy, head of FX strategy at Saxo Bank.

“The JPY short among speculative traders, still at nearly -56k contracts as of last Tuesday, was still quite large if not by historic standards,” Hardy adds.

Declines in the main Japanese exchange rate USD/JPY were responsible for almost half of the slump in the Pound-to-Yen exchange rate, which was left testing the 23.6% Fibonacci retracement of its March 2020 recovery trend at 148.55 on Tuesday amid ongoing weakness in Sterling.

The GBP/JPY rate is now on course for its 200-day moving-average at 146.57, according to technical analysts at Commerzbank who’ve also flagged the USD/JPY rate as warranting attention when warning that further declines below 146.5 are possible. 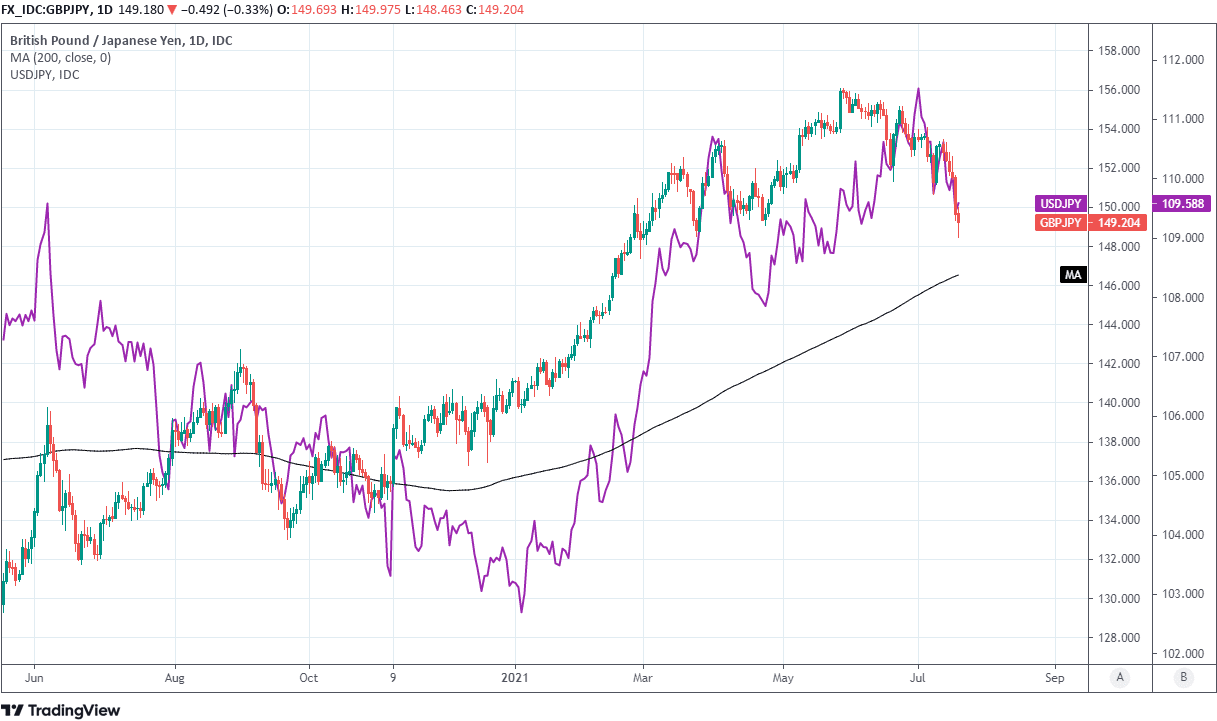 Above: Pound-to-Yen exchange rate shown at daily intervals with 200-day moving-average and USD/JPY.

“USD/JPY has severed its 2021 uptrend and is viewed as having topped for now. GBP/JPY - we highlighted this recently– it has failed at its 2007-2021 downtrend and is likely to see further losses to the 200-day ma at 146.57,” say Commerzbank’s Karen Jones and Axel Rudolph.

Despite rising against all other currencies monitored by Pound Sterling Live in recent weeks, the Japanese Yen remained the worst performer in the G10 segment of the major currency sphere for 2021, which is testament to the scale of its earlier losses.

The Yen was also still the subject of the market’s most bearish views and the speculative corner’s biggest ‘short’ trade as of last week, although the scale and speed of its corrective rebound so far has gotten the Commerzbank team looking for USD/JPY to go on declining.

“USD/JPY attention is on the downside and the 108.56 late May low and the 107.48 April low are back under the spotlight. The 55-week ma lies at 106.74 and we would allow for some consolidation there,” Jones and Rudolph say.

This is a bearish omen for GBP/JPY given that it always closely reflects the relative performance of JPY/USD and the main Sterling exchange rate GBP/USD, which is said to be on course for the 1.35 area. 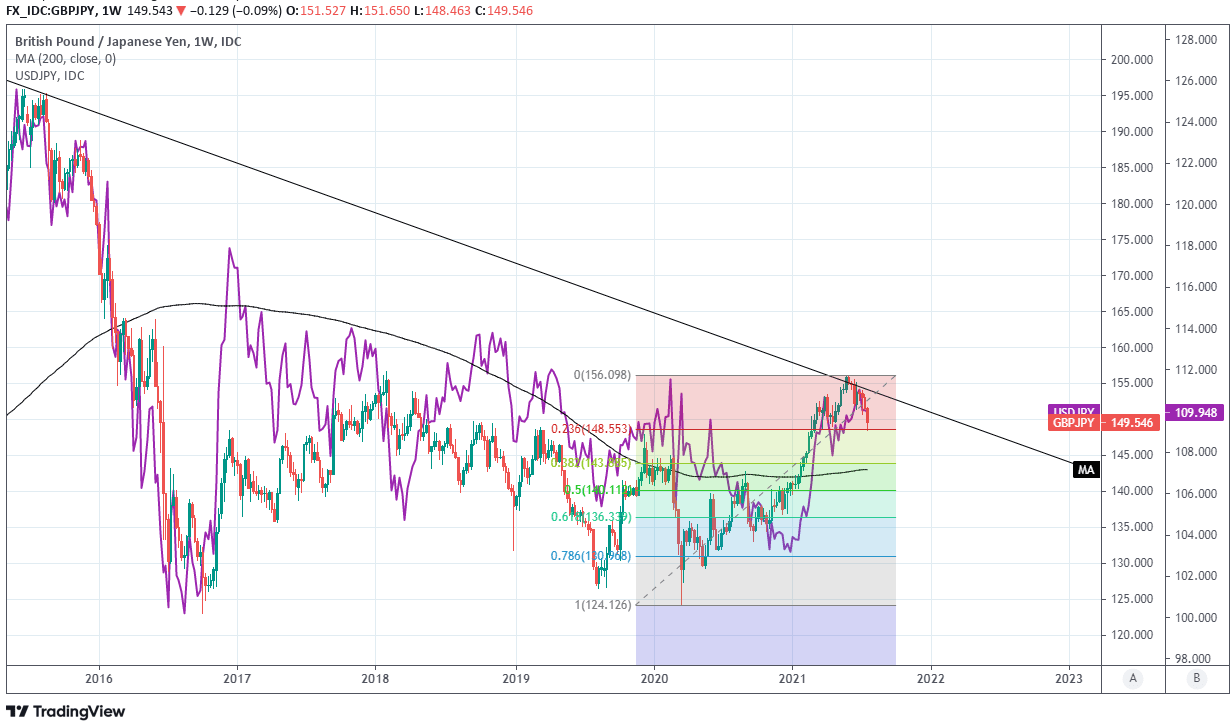 Above: Pound-to-Yen exchange rate shown at weekly intervals with 200-week average and Fibonacci retracements of 2020 recovery.

Much depends for Sterling on the trajectory of the Japanese currency from hereon, which is itself contingent on myriad international factors.

“We didn’t see UK ETF selling yesterday (daily flows below through the month), but we’ve seen selling in CAD ETF’s over the past two weeks by foreign investors (monthly flows below) in a big size suggesting it’s a broader risk off story not UK specific,” says Jordan Rochester, a strategist at Nomura.

Investor concerns about newly mutated editions of the coronavirus are one widely cited reason for the safe-haven Yen’s recent strength, and also a potential source of further gains if the investors who’ve been wagering against the Japanese currency are squeezed from the market at any point.

However, high U.S. inflation, ongoing declines in American bond yields and the impact this could be having on investor decision making has also been cited by some analysts as relevant to price action going forward.

The U.S. inflation picture means Japanese government bonds now better preserve the value of money than equivalent bonds in the U.S., despite Japan’s low levels of inflation, low inflation expectations and interest rates which have historically been much lower.

“I'd add that with lack of inflation, growth and any reason for monetary policy tightening in Japan, the Eurozone or China for that matter, there's a lot of global gravity pulling US yields down,” says Kit Juckes, chief FX strategist at Societe Generale.

“USD/JPY has only reacted very modestly - reasonable if it's a correction clear-out, less so if it's a change to the balance of risks. Even more than USD/JPY, EUR/JPY is a sell here if the current volatility, Covid concerns and search for safe havens persists,” Juckes says. 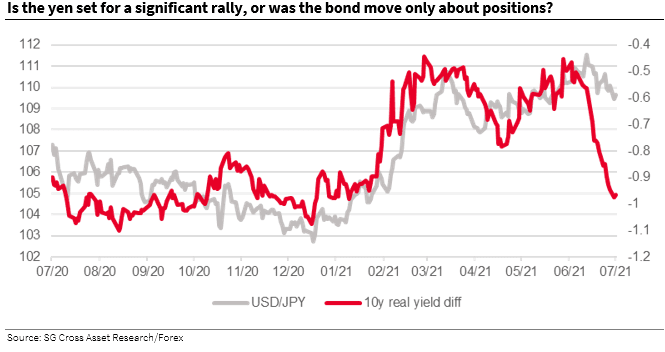