- USD in first show of FX dominance since pandemic onset
- Leads majors for 2021 after GBP/USD slips below 1.3671
- Risk aversion added to US economy & policy advantages
- GBP/USD daily close below 1.3648 may turn trend lower

The Pound-to-Dollar exchange rate appeared to fold in on itself ahead of the mid-week session after falling to a 2021 loss which made the Dollar the best performer in the G10 segment of major currencies for 2021.

Sterling was on a technical knife-edge Tuesday after betraying signs of weakness which enabled an advancing Uncle Benjamin to push the Pound-Dollar rate below its 2021 breakeven level of 1.3671.

The greenback was leading the G10 segment of the major currency rankings for the year from below 1.3671 in GBP/USD, although also crossed was the 1.3648 dividing line that separates technical uptrend from technical downtrend.

“Whilst we would expect fresh buyers here, we remain of the view the USD itself is in the process of forming a significant base. If confirmed this would likely see a break below 1.3648 to mark a major top and change of trend lower,” says David Sneddon, head of technical analysis at Credit Suisse.

The 1.3648 number was tentatively ceded on Tuesday and could leave Sterling vulnerable to further declines going forward given that it’s key to how technically oriented minds may view the trend in and outlook for the Pound-Dollar rate.

“Failure at 1.3640 would target 1.3504/1.3457, the 55-week moving-average and the 50% retracement of the move higher from September 2020,” says Karen Jones, head of technical analysis for currencies, commodities and bonds at Commerzbank. 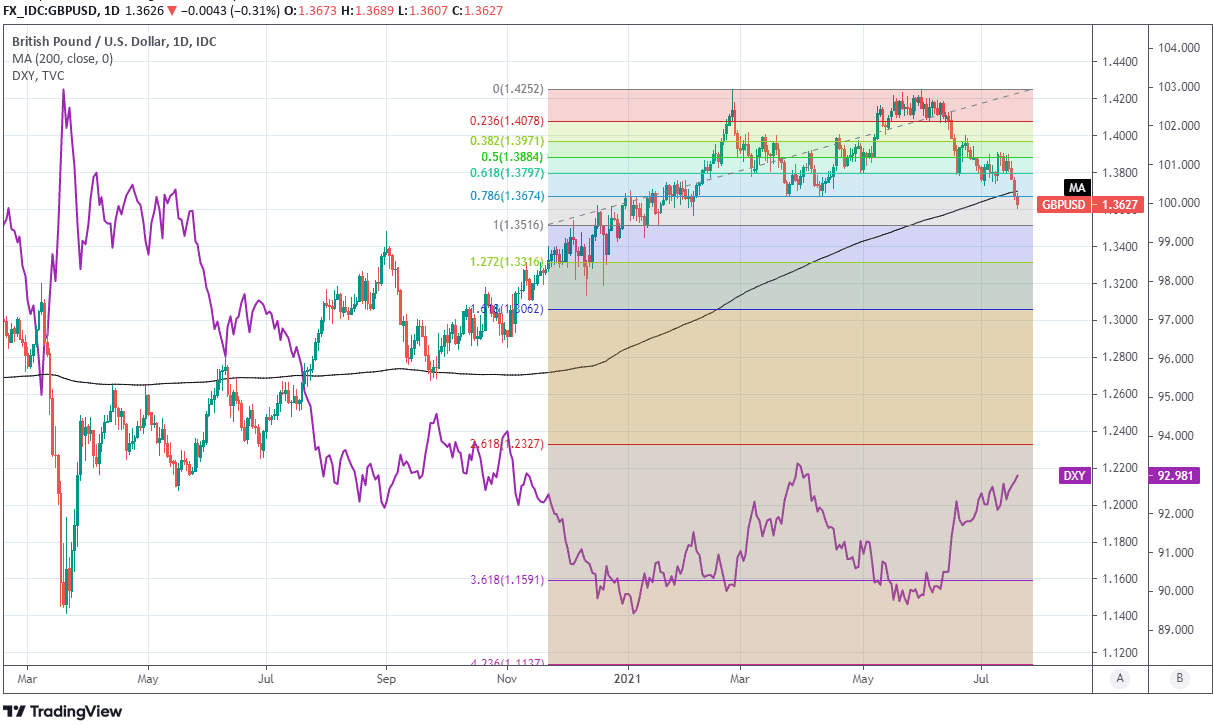 The Pound has been in steady retreat from an advancing Dollar since early June, though Sterling wasn’t helped on Monday when two members of the Bank of England (BoE) Monetary Policy Committee pitched themselves at the opposite end of the field from those on the speaking circuit last week.

“From now onwards, the Bank of England and higher yields look to be the dominant drivers of GBP in the run-up to the BoE’s August meeting. Beyond that we can’t help but think the downside potential to global risk sentiment may come into play, and we need to be ready for a possible tougher August for high beta trades – including EUR/GBP,” says Jordan Rochester, a strategist at Nomura in a Friday note.

The Dollar had previously been elevated by the stronger recovery in the U.S. and its possible implications for Federal Reserve (Fed) policy, though progress against Sterling has come amid increased investor focus on the continuing spread of the coronavirus and its numerous splinters.

“Simply put, growth is already decelerating and downside risks to the growth outlook are darkening due to rising cases, Delta and other emerging variants, as well as worries about potentially lower vaccine efficacy. At the same time, inflation is shooting higher. Supply side constraints (supply chain tightness, availability of labour/parts) are a problem central bankers cannot solve,” says Neil Wilson, chief market analyst at Markets.com.

“Stagflation. That’s how I’d sum up what this market angst is all about,” Wilson adds.

The coronavirus remains rampant including in places where populations are vaccinated and has been widely cited for recent losses in stock markets, which have stoked demand for the Dollar and funding currencies like the Japanese Yen, Swiss Franc and Euro. 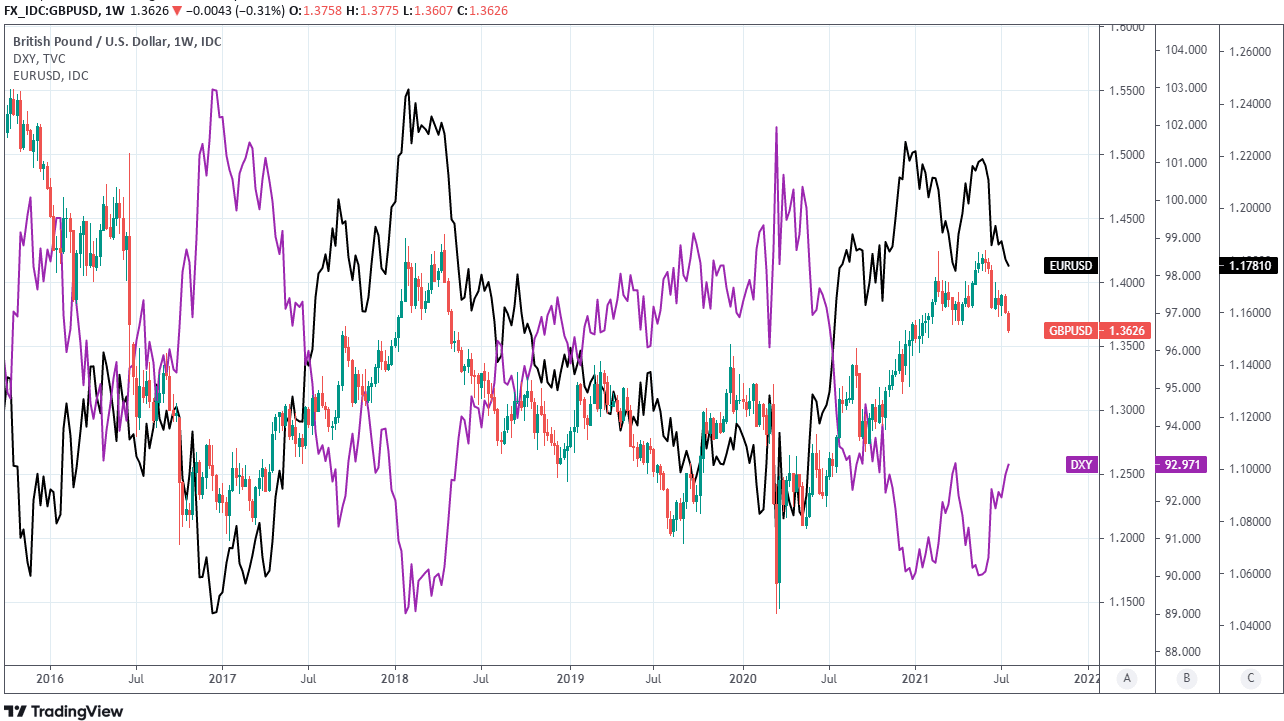 The UK was placed onto the U.S State Department’s ‘do not travel list’ on Tuesday as members of the government including Prime Minister isolated after it emerged that the double-vaccinated health secretary Sajid Javid has contracted the virus.

Meanwhile, a government adviser said 60% of those being hospitalised recently were those who hadn’t had any vaccination at all; also meaning that close to half of those requiring medical treatment have had at least one out of a two shot vaccination.

Data due out of the Office for National Statistics at 07:00 on Wednesday is expected to show the total cost of the pandemic to the UK economy exceeding £700BN, an amount equal to 36% of 2019 GDP, with consensus looking for June public sector net borrowing of £21.5BN.

This implies the UK’s main measure of national debt, public sector net debt excluding public sector banks (PSND), rose to around £2.217 trillion for last month and an amount equivalent to 111% of 2019 GDP. 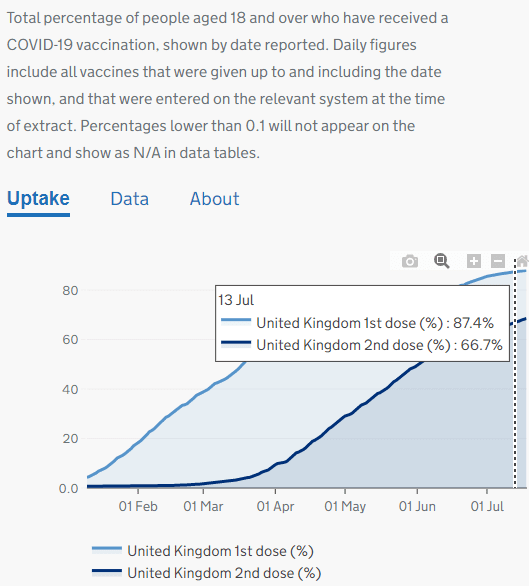 Above: UK government dashboard snapshot showing portion of adult population to have received either one or two shots of a coronavirus vaccine.