- Oversold JPY vies with USD for top of board.
- GBP/JPY cedes 150 but tipped for further loss.
- GBP spluttering as JPY outperforms short-term.

The Japanese Yen was a contender for the top spot among currencies this week by Wednesday having reached oversold levels that have helped put the Sterling-Yen exchange rate onto its back foot, although multiple analysts suggest GBP/JPY still has scope to fall further in the short-term.

Japan's Yen advanced on almost all major counterparts this last week with the sole exception USD/JPY, which was a mere 0.02% higher despite that the Dollar has defied gravity to overcome all other challengers in the meantime.

Meanwhile, the Pound has come apart at the seams concurrent with the nascent rebound in Japanese exchange rates, making GBP/JPY the source of the Yen's most significant advance against the major currencies as well as the site of one of Sterling's largest declines.

The Sterling-Yen exchange rate has fallen -1.8% in the last week, leaving little if-any difference between it and the main Sterling exchange rate GBP/USD, although the former could still have scope to unravel further in the days and weeks ahead as the "oversold" Yen enjoys a moment in the sun.

"Last week, we added a short EURJPY position to our model portfolio. This week, we think sterling could follow," writes Ned Rumpeltin, European head of FX strategy at TD Securities, who advocated that clients sell GBP/JPY after selecting it as "trade of the week" on Monday. "We think the JPY has room to recover some of its recent weakness as valuation and positioning look increasingly favourable. Our focus today is on the 108.35 pivot in USDJPY, but we also think the JPY will trade a bit better on the crosses as well." 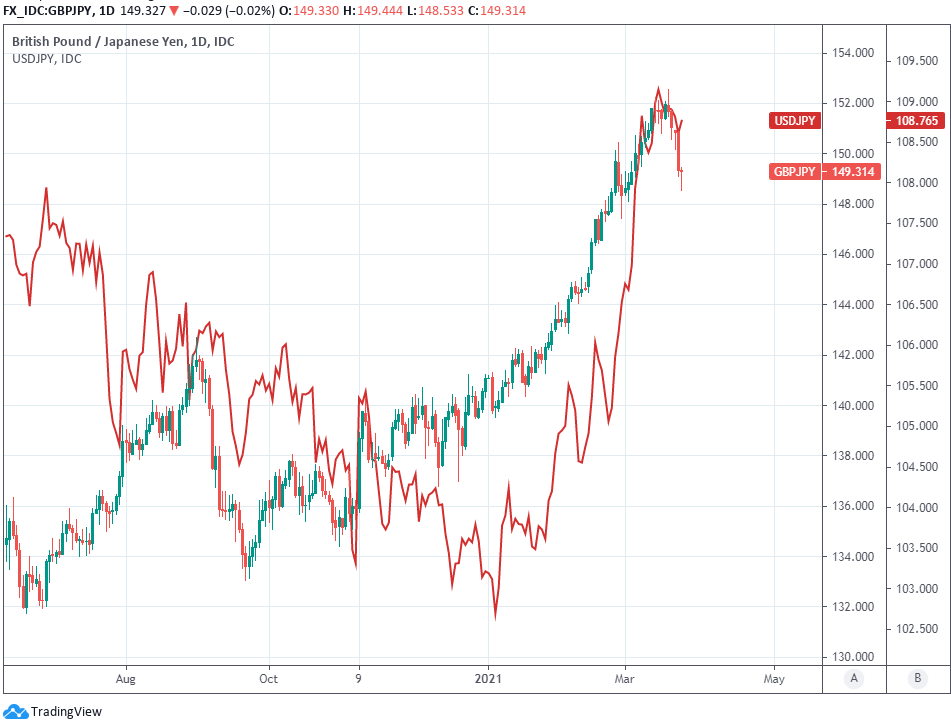 Above: GBP/JPY shown at daily intervals with USD/JPY (red).

Rumpeltin and the TD team sold Sterling-Yen around 150.72 and were in the money by Wednesday when it was quoted near to 149, although the Canada-headquartered investment bank is looking for a fall to 146.40.

Sterling has come undone alongside the European single currency amid an escalation of political bickering across the English Channel over vaccine production and deliveries, which may have helped take air out of Sterling's tyres and could linger as a setback for sentiment for a while longer.

While chalk and cheese in some respects the Pound and Euro are intricately linked in the reflation of European currencies so will inevitably sink or swim together for at least the foreseeable future, though losses have been larger for GBP/JPY than EUR/JPY and likely due to Sterlings earlier outperformance.

That was as much a complementary advance in the slipstream of the Euro's earlier rally as it was a recognition of the improved UK economic prospects. This and the Japanese Yen's nascent rebound on its own merits were both flagged at the beginning of March as worthwhile trading themes at CIBC Capital Markets.

"We continue to like USD/CAD downside for now given that factors are still supportive, along with GBP/JPY downside. The JPY looks very attractive on the crosses given how oversold it was," writes Bipan Rai, North American head of FX strategy at CIBC, in a research note this Monday. 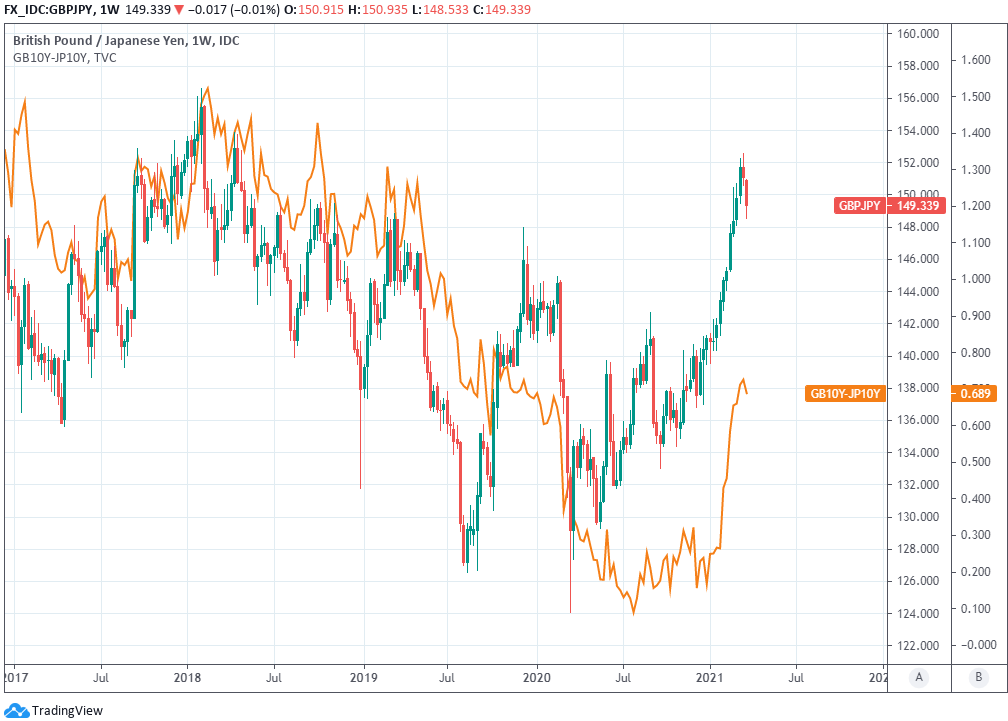 Above: GBP/JPY at weekly intervals with 'spread' or difference between yields on 10-year GB and Japanese bonds (orange).

CIBC, also Canada headquartered, said earlier in March the "GBP rally looks a bit overdone" and that Japan's Yen had already priced-in about as much 'policy easing' as was likely to be delivered by the Bank of Japan (BoJ) at its March decision. The bank wagered against GBP/JPY from early on in the month but was initially frustrated by Sterling's probe above 150, though the team has been undeterred and advocated fresh GBP/JPY sales earlier this week.

The Japanese Yen has bounded back from its recent nadir in the week since the March monetary policy decision from the Bank of Japan, which impacted Japanese government bond yields in a manner not too dissimilar to how an interest rate rise might. This saw the BoJ widening slightly the bands within which the 10-year bond yield can trade in an environment of yield-curve-control while making provision for commercial banks to earn an improved interest rate on cash reserves deposited at the BoJ.

Those policy decisions were not however reflective of a BoJ that is even close to turning 'hawkish' but were instead a delicate policy operation designed to provide the bank with scope to reduce bond yields and interest rates as a policy response to any new challenges faced by the Japanese economy on the path ahead. In other words, it's merely a side effect of this and likely a short-term one that has enabled the Japanese Yen to outperform in the last week, in the process enjoying a moment in the sun.

"JPY is likely to remain under pressure in the coming quarters due to reduced safe-haven demand amid a global growth recovery, widening foreign-domestic yield differentials, and the potential revival of capital outflows through both portfolio investment and M&A," says Shinichiro Kadota, a strategist at Barclays, who tips USD/JPY for 111 by year-end and GBP/JPY for 155. "Regarding the BoJ’s policy review in March MPM, we view that effective widening of 10y YCC band may curb the scope for future yen weakness via JGB yield levels and beta to global yields while preserving scope for rate cuts." 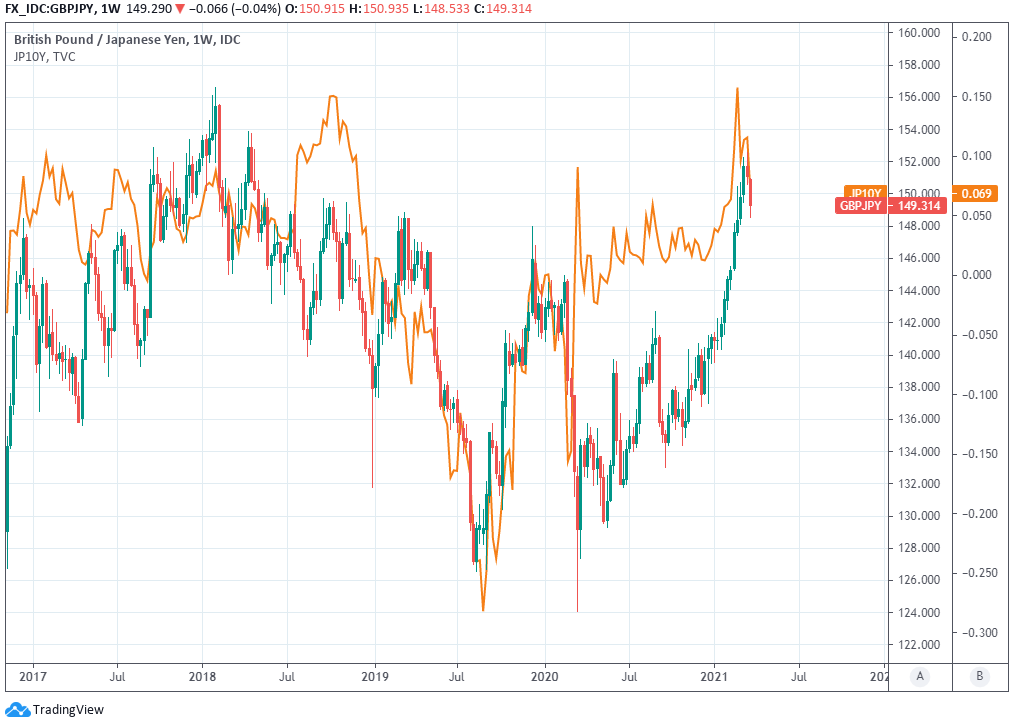