- GBP seen on the back foot until after December's election.

- As USD/JPY momentum shifts to downside on China woes.

The Pound was trounced by the safe-haven Yen on Friday, with Sterling ceding to the Japanese unit the most ground of all majors, but the looming election and souring risk appetite could see it sell-off even further next week.

Pound Sterling was firmly in retreat heading into the weekend after ceding ground to every one of its major rivals as investors digested the possible implications of the first leadership debate held this week as well as the various election manifestos that are now making their way into the public domain.

A poor PMI survey that pointed toward another contraction for the economy also weighed heavily on the Pound, which has been following election polls closely in recent weeks. Meanwhile, the Japanese Yen was back in demand amid conflicting headlines and uncertainty over whether the eagerly-awaited but still-elusive 'phase one deal' to end the trade war will ever see the light of day.

The Yen rose against all major currencies other than the Kiwi and U.S. Dollars Friday, although its strongest gains were over the election-transfixed Pound. 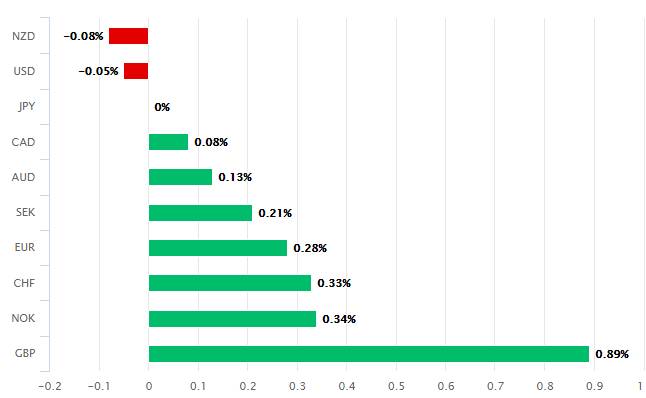 Above: Japanese Yen performance on Friday relative to major rivals.

"We keep hearing that the Labour Party’s hard left policies focusing on wealth redistribution is resonating with a larger segment of the electorate than many assume. Well if this is correct we should see evidence of gains in the polls over the coming weekend," says Derek Halpenny, head of research, global markets EMEA and international securities at MUFG. "If so, another hit to the pound will follow next week."

Japan's MUFG, the world's fifth largest bank according to S&P Global Market Intelligence, has been betting against the Pound-Dollar rate through much of November despite having a bullish medium-term view on Sterling. The team in the London office says uncertainty over the December 14 election and the prospect of an opposition Labour Party government could drag the British currency down from 1.2826 Friday, to 1.26 against the Dollar in the weeks ahead and they're not alone in having a bearish short-term outlook.

"I would not recommend a fresh GBP long position here as it may only take a few polls showing a Labour party bounce or indeed another gaffe moment in UK politics from the Conservatives to put the market’s current base case in doubt and with it cause GBP’s recent grind higher to come undone," says Jordan Rochester, a strategist at Nomura, another Japanese lender with a sizeable presence in London as well as currency markets in general.

Capital Economics said Friday a Labour election victory would send the Pound to 1.20 against the Dollar, a level not seen since the early days of Prime Minister Johnson's leadership when fears of a 'no deal' Brexit were at fever pitch. 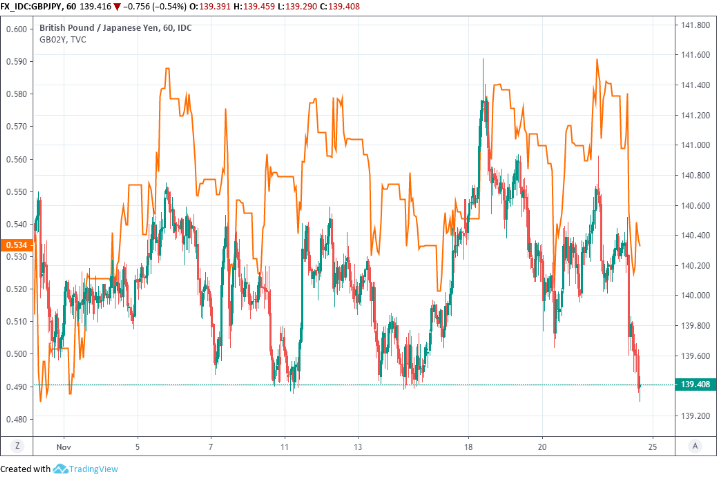 Halpenny and colleagues haven't tipped the Pound-to-Yen rate for declines next week but their outlook for other currency pairs is a recipe for a lower GBP/JPY. MUFG is looking for an ongoing retreat by the Pound-to-Dollar rate at the same time as it's eyeing a fall in the USD/JPY rate.

That would send the Pound-to-Yen rate lower if the two aforementioned moves play out at the same time because the GBP/JPY rate always tends to closely match the sum of GBP/USD divided over JPY/USD.

"Our MUFG Internal FX Flow Index has been negative (net selling of USD in USD/JPY transactions) this week, with the 5-day moving average still near 2-month lows. This indicates that market participants are expecting USD/JPY to be sold off. Electronic FX trading JPY flows that MUFG see are substantial and capture a wide spectrum of many different market participants," Halpenny says, in a Friday briefing to clients. "A simple momentum strategy shows that using this indicator derived from our internal flow could have delivered positive returns when back-tested over 2018- 2019."

MUFG, a significant currency dealer, says its own internal transaction data suggests strongly that the USD/JPY rates is liable for weakness in the days ahead. The data is pointing toward losses for the Dollar at the same time as the bank's analysts are growing concerned about market risk appetite. Halpenny said Friday that the ongoing absence of a 'phase one deal' to end the U.S.-China trade war places a question mark over the global growth outlook. 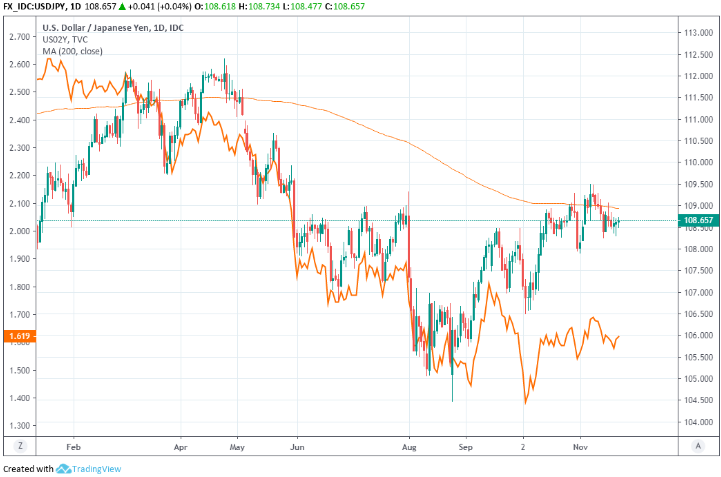 The Dollar-Yen exchange rate failed to sustain a break above its 200-day moving-average, represented by the thin orange line on the chart above, earlier in November and since then upward momentum behind the pair has waned. This leaves the Dollar with a downside bias relative to the Yen and U.S. government bond yields could prove to be instrumental in determining whether USD/JPY again challenges its 200-day average of prices or retreats further.

Yields are important because Japan's twin surpluses, combined with interest rates are about as low as they can get and economic growth that has been weak for decades, have fostered a meaningful appetite among Japanese institutions and households for investing overseas. Japan is a nation of savers that runs surpluses on both the trade as well as current accounts, rather than deficits like the U.S. and UK, which is significant for currency markets.

Those surpluses are a backstop that ensures demand for the currency even in times of uncertainty or strife, which is a significant part of why investors tend to flock toward the Yen when their appetite for risk fades. Risk appetites are the first thing that would suffer upon further doubts about the outlook for trade relations between the U.S. and China, which would be positive for the Yen. 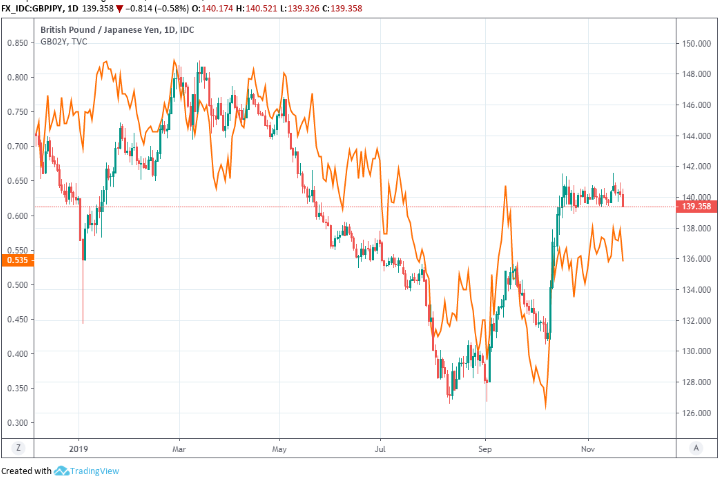