- But resilient USD, supported by trade fears, also in mix.

- 1.30 seen holding until at least after December election.

The Pound-Dollar rate retreated further from a five-month high Friday as uncertainty over the looming election and a resilient greenback weighed on the British currency, which is being tipped to remain on its back foot into December.

Sterling has retreated from near 1.30 level on Monday to trade comfortably below the 1.29 handle heading into the weekend, as investors digest the possible implications of the first leadership debate held this week as well as the various party manifestos that are now making their way into the public domain.

A poor PMI survey that pointed toward another contraction for the economy in the final quarter, also weighed heavily on the Pound.

Prime Minister Boris Johnson's Conservatives have enjoyed a strong poll lead over the opposition Labour Party since the December 12 ballot was announced but bitter memories of Theresa May's lead heading into the 2017 election, which proved to be erroneous, are containing enthusiasm for Sterling.

The 1.30 level has proven to be a formidable resistance threshold over the last two weeks even as the Conservative Party polling lead climbed and most of the analysts followed by Pound Sterling Live say it should hold into polling day.

"The best case scenario to lift GBPUSD above 1.30 will be a majority government led by Prime Minister Boris Johnson and his Conservative Party," says Philip Wee, a strategist at DBS. "A Labour government is considered populist and unfriendly to big businesses but this is not the worst case.  What will send GBPUSD down to 1.20 again is the still-likelihood of a hung parliament and the risk of a no-deal Brexit on January 31, 2020. Unfortunately, UK polls have proven unreliable at the last few elections." 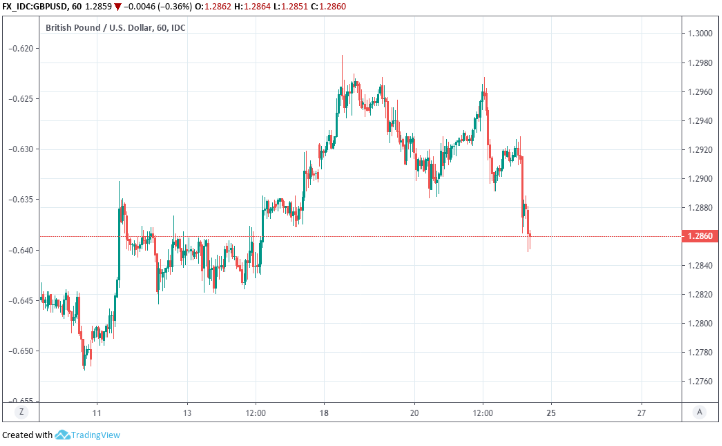 A Conservative Party majority government would likely mean the agreement struck by Boris Johnson in October becomes law, taking the UK out of the EU but locking it into 'transition period' during which the future relationship is negotiated. Crucially for markets, passing Johnson's agreement would negate the threat of a 'no deal' Brexit while electoral victory would spare the economy and Pound from years more of indecision and delay, if not worse, under an anti-Brexit opposition Labour Party government.

"A victory for Labour in the general election on 12th December would probably cause the pound to slide from $1.29/£ to around $1.20/£. But the prospect of a softer Brexit, or even no Brexit at all, would limit the downside posed by some of Labour's economic policies," says Thomas Pugh at Capital Economics.

Analysts in the London office of MUFG, the world's fifth largest bank according to S&P Global Market Intelligence, have a bullish view on Sterling over the medium-term but are betting against it for the time being. They sold the Pound-to-Dollar rate around 1.2815 and have been looking for a move down to 1.26 ahead of the December vote, with the 1.30 rubicon set as their 'stop-loss' level.

However, others have thrown caution about pre-election price action to the wind in favour of positioning for a post-election recovery.

Morgan Stanley bought the Pound around 1.27 in mid-October and is targeting a move up to 1.3350 in the months ahead, which would put the British currency at its highest level since March 2019. They anticipate that if Brexit happens at all, it will be via Boris Johnson's agreement and have told clients the threat of a 'no deal' exit is all but vanquished.

The election is significant to the outlook but it's not the only thing weighing on the Pound-Dollar rate because a resilient if-not strong greenback has also been in the mix too. And with the outlook for the U.S.-China trade talks growing ever murkier, the Dollar is being tipped to remain on its front foot for now. 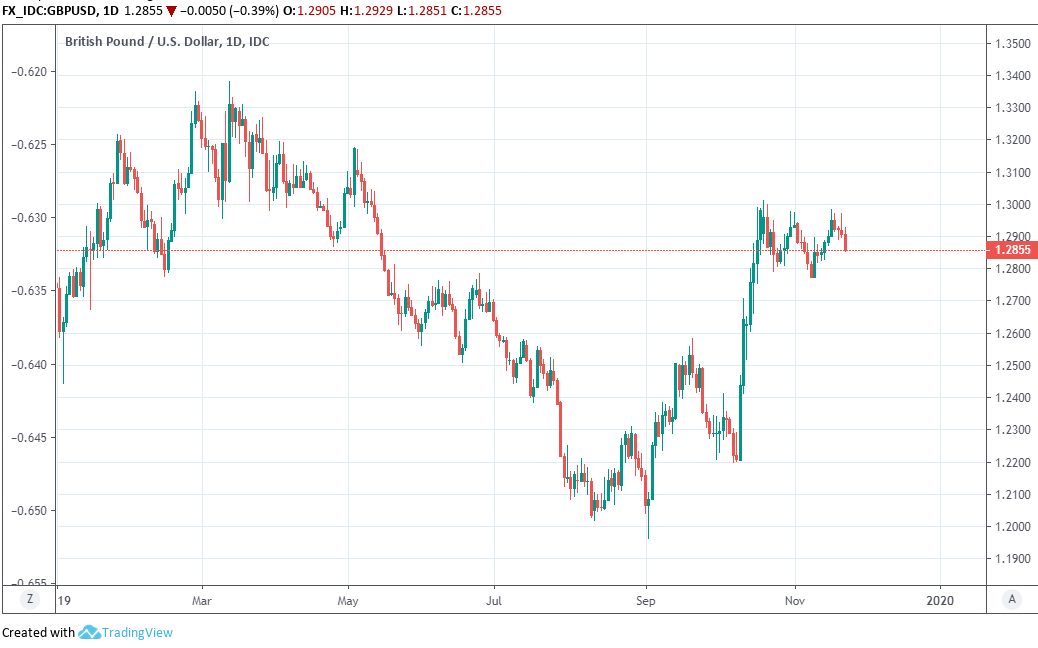 "The trade deal story is still awaiting clarity as markets continue to receive conflicting news," says Chris Turner, head of FX strategy at ING. "In all this, the dollar has managed to retain most of its strength and it should continue to do so today as the calendar is not displaying any clear catalyst for a USD correction."

There have been conflicting about the status of the U.S.-China talks this week, which have all moved markets to some extent.

Bloomberg News reported on Tuesday 19 that negotiators are trying to thrash out an agreement that removes some of the tariffs imposed by either side in the last 18 months and that a deal might be reached. But on Monday 18, CNBC said China is pessimistic about the prospect of finalising a 'phase one deal' because the U.S. is reportedly reluctant to remove enough of the tariffs.

The Ministry of Commerce said the following at a press conference Thursday, in response to a question from The South China Morning Post.

"On the morning of November 16, Vice Premier Liu He made a phone call with US Trade Representative Wright Heze and Finance Minister Mnuchin. The two sides engaged in constructive discussions around the respective core concerns of the first phase of the agreement...Regarding the details of the agreement consultation, I have no more information to disclose to you at present. But outside rumors are not accurate," says Gao Feng, a Ministry of Commerce spokesperson. "China is willing to work together with the US on the basis of equality and mutual respect to properly resolve their core concerns and strive to reach a first-phase agreement. This is in the common interest of both China and the United States and is in the interest of the entire world. Thank you."

Thursday also brought with it another Bloomberg News report that claimed Chinese Vice Premier Liu He is "cautiously optimistic" about the prospect of reaching a 'phase one deal'. But that was itself followed by remarks from President Donald Trump, who said "China would much rather make a trade deal than I would...I don’t think they’re stepping up to the level that I want. 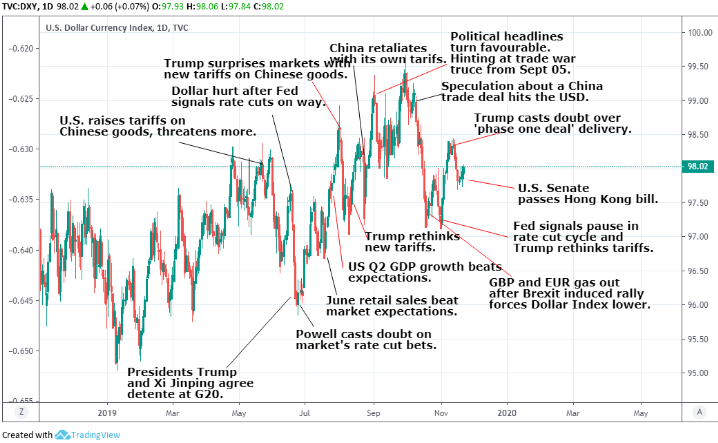 It remains the case that new tariffs will be imposed on all of China's remaining annual exports to the U.S. on December 15, although it was hoped that an October 11 'in principle' agreement would ultimately avert those levies.

The Dollar has done well from trade tensions in the past, mostly at the expense of the China-exposed Euro and the commodity-backed as well as China-exporting antipodean currencies.

However, the greenback tends to suffer relative to other safe-havens like the Japanese Yen and Swiss Franc during times of unease and risk aversion. MUFG, which is headquartered in Japan, said Friday the Yen could do well in the weeks ahead off the back of uncertainty over the talks.

"There hasn’t been a formal announcement yet from China as far as a response to the US signing of the Hong Kong Human Rights and Democracy Act is concerned but some form of retaliation against US business interests may yet come. Overall sentiment around a Phase One deal has worsened the last two weeks and so the yen may be poised for further gains," says Fritz Louw, a London-based currency analyst at MUFG.

U.S. lawmakers threw their weight behind the Hong Kong Human Rights and Democracy Act this week, with the bill receiving a two-thirds majority in Congress that means it will become law eventually irrespective of whether President Donald Trump backs it. But a looming decision on whether to put his signature to it may impact on whether or not the much-vaunted but ever-elusive 'phase one deal' does in fact materialise and temporarily end the trade war.