- Midterm election could be a turning point for the U.S. Dollar.

- USD bulls will capitulate once market is below 111.60 level.

The U.S. midterm election in November could mark a turning-point for the Dollar if it results in a divided Congress, according to analysts at TD Securities.

If the elections on the 6th results in a politically-divided Congress it could make it harder for the Trump administration to push through additional fiscal stimulus policies.

If that source of upside for financial assets is compromised then the opposite will happen, sending the stock market and Dollar lower.

The currency pair most likely to reflect this scenario is USD/JPY, because it could potentially fall quite deeply. The pair is already trading two and a half standard deviations higher than its fair-value estimate because the Dollar is overvalued and the Yen undervalued on a fundamental basis, according to TD.

"This is also why that if the mid-terms reveal a divided Congress, USDJPY – which continues to trade ~2.5 standard deviations rich to our HFFV estimate – could become the next big short," says Mazen Issa, a strategist at TD Securities.

Part of the reason why the Yen makes such a bearish combination with the Dollar is because of a change in the buying preferences of Japanese investors.

Previously they would purchase U.S. Treasury Bonds (USTs) but more recently they have rotated into US stocks. More stock market weakness would see Japanese investors sell their holdings and repatriate funds back to Japan, increasing demand for the Yen at the expense of the Dollar in the process.

The Dollar's relationship with so called risk assets has changed of late. Previously it traded like a super-safe-haven and would rise during crises, however, this has not been the case during the recent US stock market sell-off.

The reason may be because so many foreign investors have bought into the stock market and when they sell and return their money it weakens the Dollar.

It could also be because the cause of the fall is the perception that interest rates are rising and will stifle growth, or that growth will soon decline for some other reason, which undermines the outlook for corporate profit.

The way investors are reacting to the dip in the stock market is also possibly pressuring the Dollar. Normally investors would be leaving stocks and moving into 'safe' bonds, reflected in falling yields, but they are not. This suggests investors are looking outside of the US for opportunities instead.

TD's bearish fundamental view of the USD/JPY pair is mirrored by Pound Sterling Live's own technical analysis, which flagged recently that USD/JPY was in the process of breaking below a key trendline from the March lows. A break below it would confirm more downside to a target in the 110s.

This bearish view was supported by CFTC data showing the number of bearish bets on futures exchanges on the Yen had reached an extreme high. Positioning is is a contrarian indicator so extreme bearish bets actually suggests the currency will probably rise.

A break below critical support located at 111.60 would unleash another wave of selling, according to Issa. This chimes with Pound Sterling Live's view that a break below the 111.82 lows would confirm the trendline break and green-light a path lower to an eventual target at 110.30.

"We like fading rallies towards 113 and we remain keyed on critical support located near 111.60 as a capitulation point for USDJPY bulls if broken," says Issa. 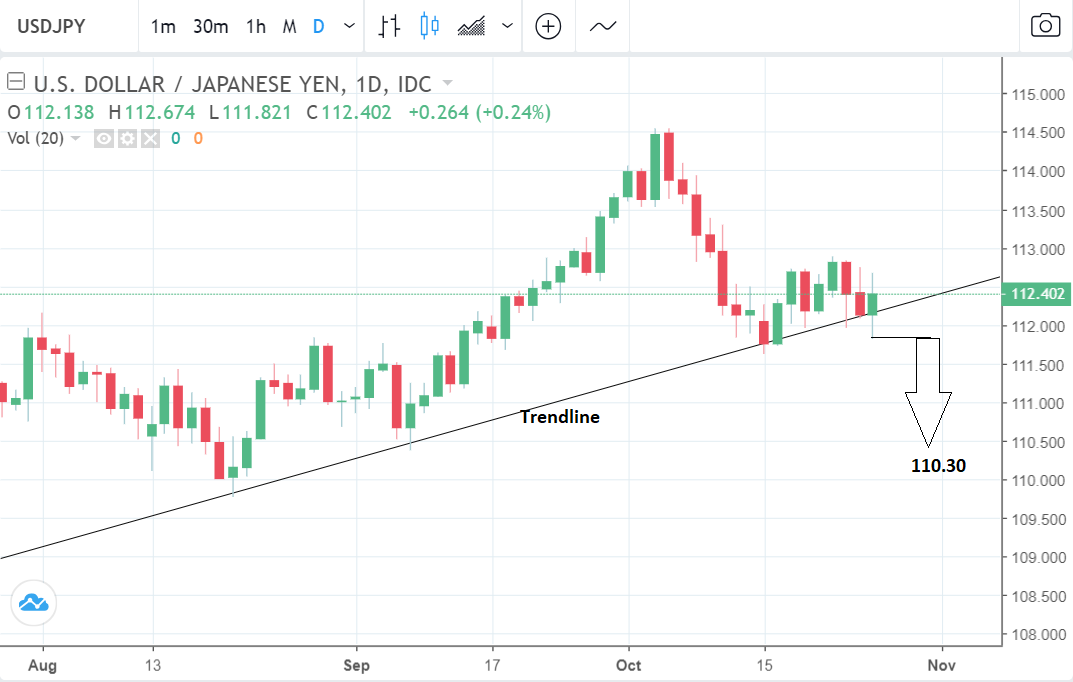