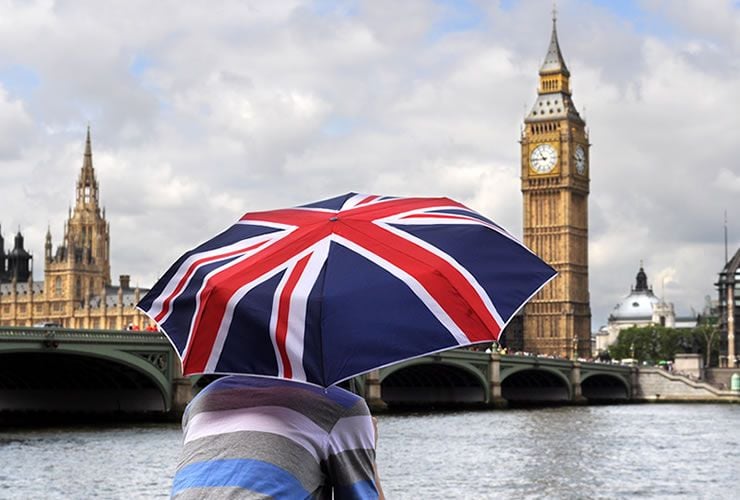 With evidence mounting that the Remain camp is gaining advantage in the battle for the UK public’s allegiance ahead of the 23rd June vote we have noted the pound stage an impressive short-covering rally.

Markets are simply unwinding their negative-GBP bets, placed in times when polls were a lot tighter and odds being offered on the outcome more even.

But the question remains - what will happen to the pound should the UK vote to leave or stay? We have covered the former quite a bit over recent months, largely because it is a good scare story that creates its own headlines.

But, the question of what happens should the Remain vote win the day remains a compelling one, and one that is arguably overlooked with lazy assumptions going unchallenged.

Taking a stab at the question are Capital Economics who reckon that the pound should turn lower against the dollar following a Remain vote. However, evidence presented by DNB Markets as regards the GBP vs the EUR suggests the pound could rally.

Capital Economics on Why the GBP/USD Will Pop Higher, But Ultimately Still Turn Lower

Capital Economics rightly point out that underlying fundamentals have shifted since late 2015, therefore so too has GBP’s fair value level.

“If the UK votes to stay in the EU, we expect a knee-jerk strengthening in financial markets, although any rise in the pound might be short-lived,” says a note compiled by Capital Economics' Roger Bootle, a Wolfson Economic Prize winner.

That said, markets are known to overextend themselves and for that reason Bootle and his team do see the prospect of GBP/USD racing to 1.50 in the event of a Remain vote winning.

“The UK’s relative rate expectations might also have been pulled down a bit by Brexit fears. But even accounting for that, we think that cable would only rise from its current level of $1.45 to about $1.50,” says Bootle.

In a similar vein to that offered by Capital Economics, Societe Generale have warned this month that fair value in the GBP to USD exchange rate could end up being quite a bit lower than currently implied by sterling’s value.

Soc Gen have noted that the difference in 2 year yields on offer in the US and UK is a strong guide to GBP/USD value as they reflect the underlying dynamics of the economy and interest rates.

Even with the whole Brexit saga this guide has held up relatively well.

When we published the article highlighting Soc Gen’s concerns, 2-year sterling rates were over 20bp below US ones, something which we haven't seen since 2006.

According to Societe Generale, the far right of the chart below suggests that while sterling got ahead of itself earlier this year as Brexitmania took off, becoming notably undervalued.

With the Remain camp pulling ahead the pound has recovered, however, it appears it may have already bounced too much: 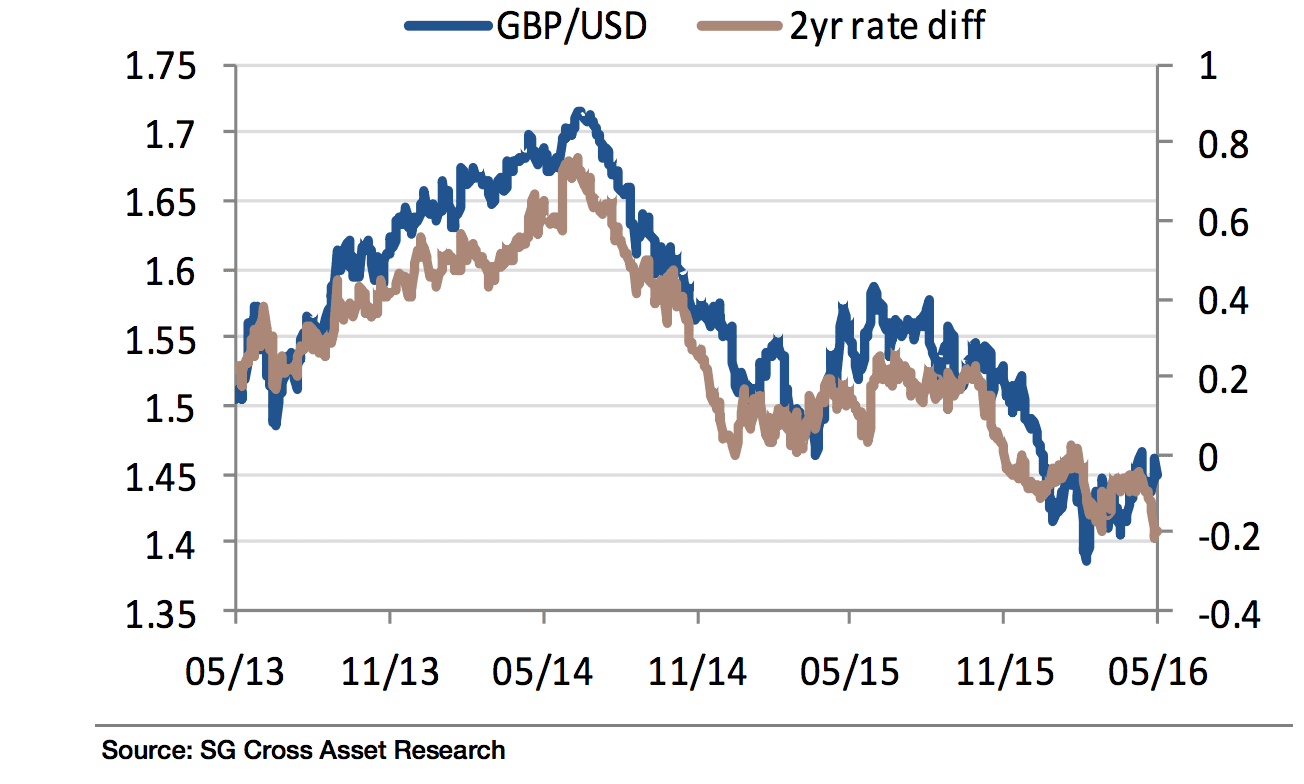 “If you believe that whether the UK stays in the EU or not, rates aren't going to go up even if the Fed finally gets a hike or two out of its system, there's a lot of downside,” says Kit Juckes, an analyst with Societe Generale who has been studying the charts for clues on the GBP’s future direction.

Juckes notes that a 50bp move down in the rate differential would imply a “fair value” for GBP/USD at 1.25.

“That seems implausibly low but still, the only question is how to stay short through the vote - because I'll be even more bearish if the vote is to stay in the EU and sterling bounces,” says Juckes.

The message coming from Capital Economics is that any recovery in the GBP exchange rate complex is likely to be short-lived.

Here is another look at the 2 year yield differential between the US and the UK, this time from Capital Economics. 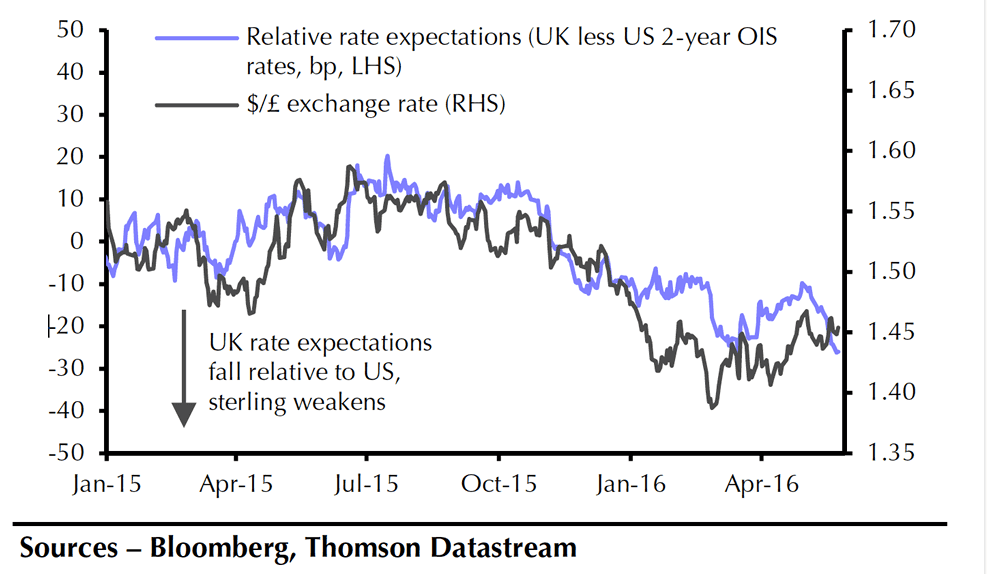 Again it tells us that much of the Brexit-inspired losses have already been recovered. Therefore, unless the rate differential actually moves up, sterling doesn’t have much fundamental basis to advance.

“The relative monetary policy outlook could dampen the pound. While we expect the MPC to raise interest rates a little faster than investors anticipate, we think that the US Fed will hike even more quickly relative to expectations,” says Bootle.

With the Fed outpacing the Bank of England on rate rises the natural reaction would be for GBP/USD to track lower.

An interesting pointer offered by Capital Economics is investors’ attention could turn from the referendum to the huge size of the UK’s current account deficit.

We have pointed out in the past that the current account deficit is one of the key pillars of currency valuation, and for the pound, the UK’s current account spells only one thing: Downside.

In short, the UK imports far more than it exports, therefore the exchange rate should be a lot lower were it not for the balancing effect offered by foreign investor capital inflows.

An interesting point forwarded by Capital Economics is the suggestion that a Remain vote does not offer any guidance as to what the UK’s future relationship with Europe would look like.

“It is possible that the UK’s referendum – even if it votes to stay – loses it some goodwill with the EU and influence over EU decisions. Indeed, although the “remain” camp points to the uncertainty that would be caused by leaving, it is by no means certain what the UK’s future in the EU would look like.

“The EU might seek to ‘punish’ the UK for the trouble it has caused by pushing ahead more strongly with, for example, tighter financial regulation that would work to the UK’s disadvantage. Against that, though, there is a chance that the UK’s referendum ends up giving a nudge to the EU to reform and address some of its weaknesses.”

What of David Cameron’s much-touted pre-referendum deal which would see “Britain is better off, more secure, more prosperous... inside this reformed European Union”?

Bootle claims it is an exaggeration – “we doubt that the deal will make any meaningful difference to the UK’s long-run economic prospects.”

The deal supposedly protects the UK from potentially damaging legislation stemming from the EU, will reduce migration from Europe and makes the EU more competitive.

“But there were no concrete proposals to improve competition and there is widespread scepticism that the proposals to restrict in-work benefits for new migrants’ benefits will actually have much effect,” says Bootle.

Interest Rate Rise Back to the Fore

With the uncertainty heralded by the EU referendum out of the way, will the Bank of England race ahead and raise interest rates, a surely pro-GBP scenario.

Would a near-term rate hike come back onto the agenda?

“If the recent economic weakness turns out to have been about far more than Brexit concerns, then the answer is no,” answers Bootle who points out that the Markit/CIPS PMIs are now at a level which in the past has often triggered interest rate cuts from the MPC.

A pick-up in GDP growth is not the only thing the MPC will be looking for before it decides to raise interest rates.

The Bank has long been clear that it is a rise in inflation that they are really interested in, and latest data does not suggest prices are getting the kind of traction that would bother the Bank.

“Accordingly, if the UK votes to stay in the EU, we still think that there is a reasonable chance of an interest rate rise before the end of the year – most likely in November, once the dust has settled after the referendum. At the very latest, we would expect one in the first half of 2017 – still well before markets’ expectations of a rise in 2019,” says Bootle.

EUR to GBP: The Pound Must Stll Rise

While studies of rate differentials suggest the pound is potentially overbaked against the dollar, the same cannot be said for the pound against the euro.

A similar study of rate differentials, this time between the Eurozone and the UK, suggests the EUR/GBP still has further to fall: 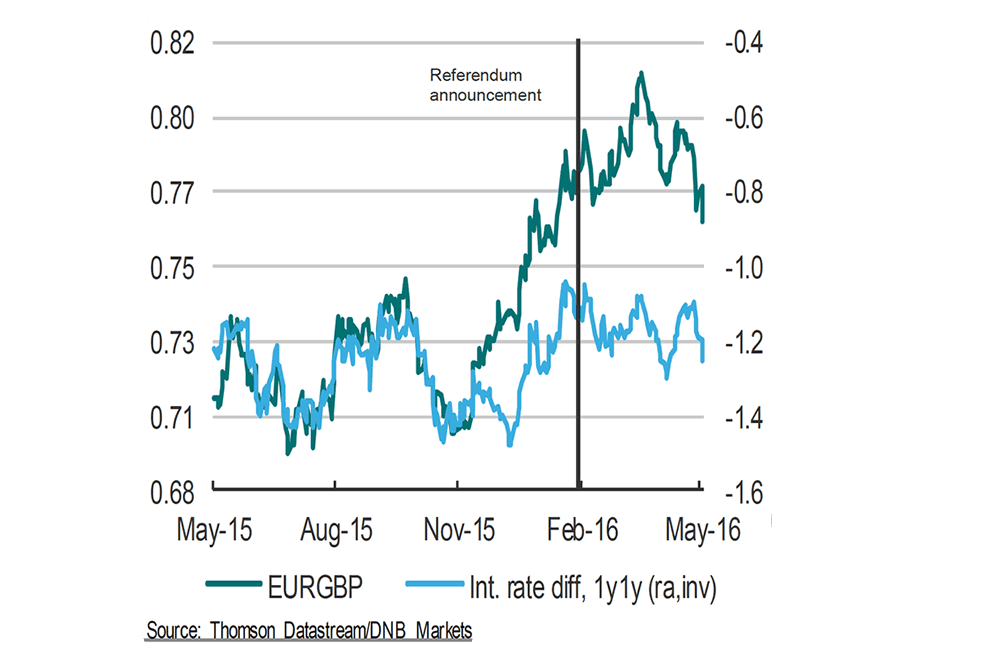 The same divergence seen between GBP/USD and rate yields can be observed between EUR/GBP and rate yields. The only difference is that EUR/GBP has still not fallen far enough.

Thus, on the event of a Remain vote we would expect the pound to continue rising against the euro.