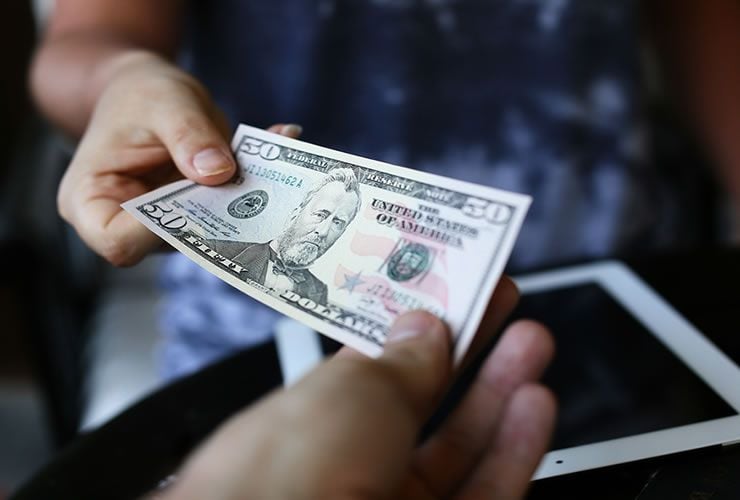 The US dollar’s decline could be coming to an end with analysts at Barclays warning this week’s FOMC statement is unlikely to trigger further notable declines.

The British pound continues to grow in confidence against the US dollar allowing the GBP to USD conversion advance with charts now suggesting that the March low around 1.38 is as bad as it is likely to get for the exchange rate.

We have seen sterling recover higher towards 1.44, but there is a debate as to whether or not we are witnessing an all-out bull move.

“The undertone for GBP is clearly positive but only a daily closing above 1.4455/60 would indicate that the month long neutral phase has shifted to bullish,” say analysts at United Overseas Bank in Singapore in a note to clients.

U.O.B do however concede a break of this trigger is a likely scenario unless there is a move back below 1.4320 in the next 1 to 2 days in which case downside momentum could establish itself once more.

What Could Decide the Fate of the Pound-Dollar?

There are two fundamental triggers that could alter the technical setup in sterling-dollar over coming days: UK GDP and the US Federal Reserve’s policy decision, both on Wednesday, April 27.

As we note here, UK growth data could well disappoint with surveys suggesting businesses are opting to defer big decisions ahead of the UK’s referendum on European Union membership, due on June the 23rd. However, with markets so negative on the topic we suspect the pound could catch a bid were date to beat expectations.

For the broader dollar complex, and this is arguably a more important driver for GBP/USD, it is the FOMC statement that matters.

Can the US Fed is the reason the US dollar has struggled through 2016, and this month’s meeting could extend the decline, or exact a recovery.

“The April FOMC statement is unlikely to be a catalyst to reignite a dollar uptrend. It would likely fall short of saying risks are ‘nearly balanced,’ and as a result, will likely cause many investors to conclude that a second rate increase before September is possible, but unlikely,” says a note from Barclays.

However, analysts do counter that they think the downside in the USD should be more limited from here.

Why then has the USD’s ability to weaken declined? There are three reasons:

First, CFTC data indicate that speculative USD long positions have been pared back significantly from around 25% of open interests in November to about 3.2% currently, although if we exclude the JPY, the drop is comparatively less.

“Given relatively positive labor market fundamentals in the US economy, we doubt that USD positioning will turn to net short in the near-term,” say Barclays. This should derive dollar bears of the required momentum to extend the decline.

Second, Barclays’ research suggests the US dollar is likely very close to a bottom, if history is any guide. The trade-weighted dollar has already fallen more than 7% . versus the majors since the January peak, compared to the largest peak-to-trough drawdown in a USD uptrend of 9.5% . 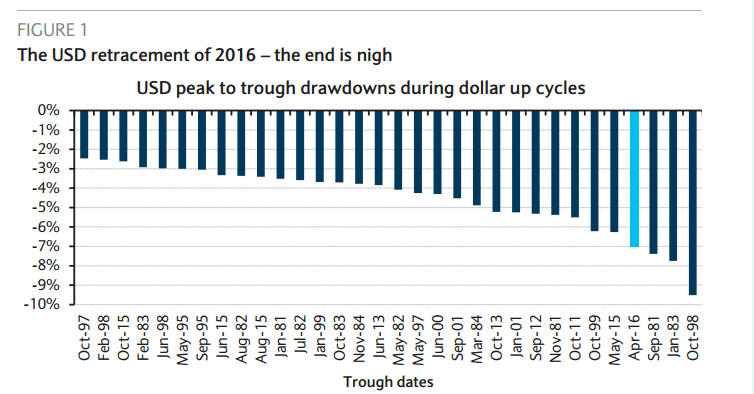 Finally, the prospects of an interest rate rise at the Federal Reserve - the lifeblood of dollar strength - are already really quite low, and chances are growing that they start to rise.

A rise in expectations will naturally see the dollar catch a bid.

Then there is the status quo in global stock markets; the recent rally in stocks has not been helpful to the USD which typically catches a bid when markets are nervous.

“Although we expect benign market conditions and a range-bound USD in the near term, there are risks on the horizon that could potentially interrupt the risk recovery. In particular, financial risks in China appear to be rising,” say Barclays.

Chinese SOE defaults in the onshore bond market have driven credit spreads wider, in turn leading to renewed pressure on the stock market.

“Consequently, roughly RMB60bn of onshore bond issuance was cancelled or postponed, while reported defaults in the shadow banking sector have increased,” say Barclays, “if the contagion effect widens beyond China’s shores, safe haven demand for the USD could return.”