The pound to dollar exchange rate is recovering from significantly undervalued levels with a leading FX analyst telling us that 1.50 is likely to be reached before the end of 2016.

The pound continues to recover against the US dollar having reached 1.43 from the late February lows of 1.3856.

The recovery is justified argues analyst Kathrin Goretzki at UniCredit in London who has told clients that the GBP to USD exchange rate has deviated wildly from fair-value levels as the risk-premium implied by the EU referendum is absorbed by currency markets.

The move higher appears to be an acknowledgment by markets that they may have been too negative on stering, particularly in light of the chances of an EU exit remaining around 30%.

The observation that sterling is undervalued will have speculators licking their lips - fair value must ultimately be found again and there will be profits to be made by catching the recovery when it comes.

This will certainly make coming months interesting for those watching the GBP/USD exchange rate.

How we Know the Pound is Undervalued

UniCredit use an important theory of exchange rate forecasting to determine where a currency should be, both now and in the future.

"In other words, a higher return on domestic assets than foreign assets would require an expected depreciation of the domestic currency. Our short term FX forecasting model uses this relationship: changes in the spot exchange rate mimic changes in the interest rate differential," explains Goretzki.

This simple model does a decent job of tracking movements in the spot exchange GBPUSD rate, but since mid-December a large gap has opened up between the two.

This gap has resulted from the 7% depreciation of sterling against the dollar: 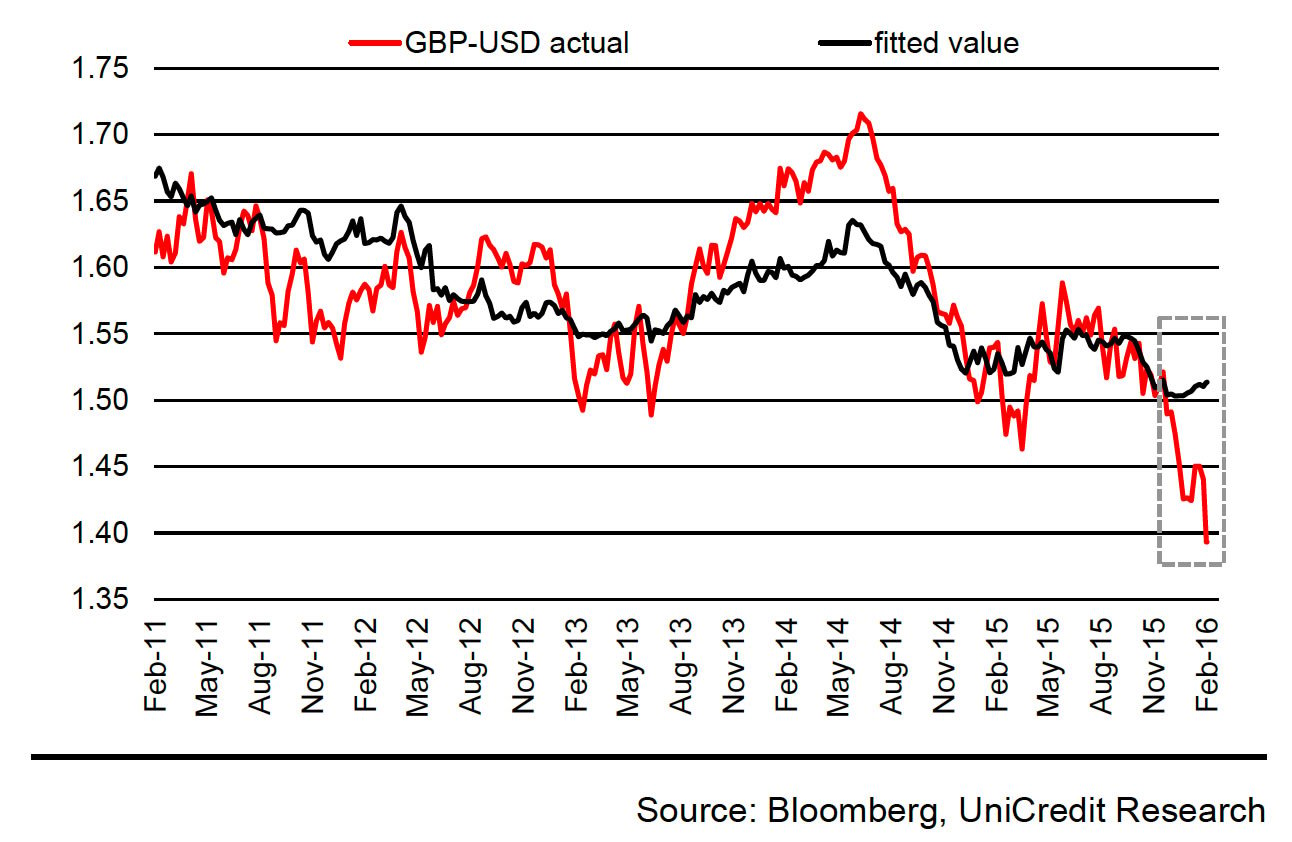 The referendum premium – as measured by the gap between the actual GBPUSD exchange rate and UniCredit’s short-run forecasting model – now stands at 8%.

Towards the end of February the divergence widened dramatically as the deal was announced and Boris Johnson declared he would campaign for the UK to leave the EU.

"The referendum premium – as measured by the gap between the actual GBP-USD exchange rate and our short-run forecasting model – now stands at 8%," said Goretzki at the time.

The GBPUSD exchange rate would therefore be at around 1.50 were there to have been no vote this year; the implication is that on an In vote the exchange rate will race to catch up to fair value.

Analysis from HSBC uses a similar forecasting model and notes a similar degree of undervaluation.

HSBC warn that the gap could get much larger on a UK exit with the prospect of a 15-25% decline in the pound to dollar exchange rate forecast on such an eventuality.

However, analysts at HSBC say the pound will likely rebound to 1.60 by the year-end if the UK votes to stay in Europe.

Interestingly, this is exactly where UniCredit are forecasting GBPUSD to end the year confirming the preferred scenario held at UniCredit is an In vote.

UniCredit believe that ultimately the British people will vote to stay in the EU.

“If we are right, sterling is set to outperform most of G10 FX in 2H16 as the removal of uncertainty should trigger a relief rally. This should bring GBP-USD back in line with its short-term fair value,” says Goretzki.

The current misalignment between GBP-USD and rate differentials suggests to UniCredit that gains in the weeks following the referendum could well be in the double digits.

From a longer-term perspective, the deviation from fundamental equilibrium value looks extreme.

Beyond referendum uncertainty, the main reason for this is the BoE’s super dovish stance and analysts expect this to change when cost pressure picks up in the UK in 2H16.

Pay growth will likely accelerate over the coming months as the labour market is tight.

UniCredit are forecasting the GBP to USD exchange rate to end 2016 at 1.50, lower than the 1.60 they had forecast in early March.

So should speculators buy the pound ahead of a spectacular recovery?

It’s not quite so simple.

Goretzki says while the drag on sterling from the referendum premium is large it could get larger in the run up to the vote on 23 June.

Indeed, this telling graphic from Societe Generale confirms there is more downside on offer. 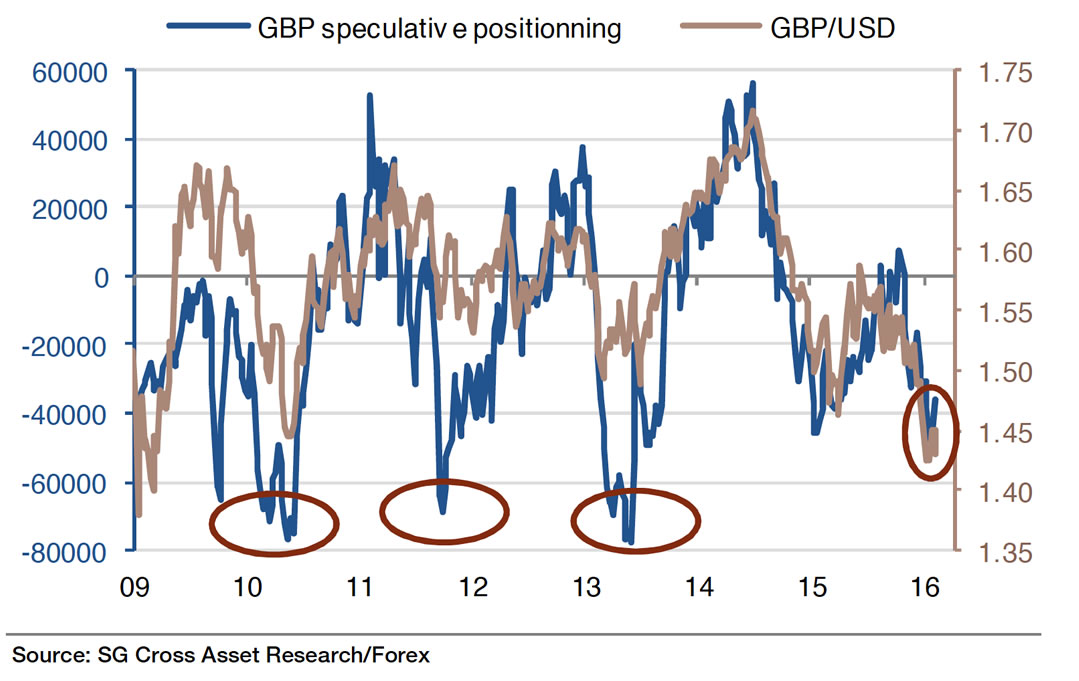 The image displays bets against sterling at the present time and shows that if history is anything to go by these bets could get larger and the currency would go lower as a result.

“Between now and the vote, we’ll see GBP/USD closer to 1.30 and EUR/GBP above 0.80. There’s too much uncertainty for bargain-hunters to buy the pound,” says Kit Juckes at Societe Generale.

An UK Exit is Still Possible Though

While HSBC take a stab at guessing the outcome by calling a 15-20% decline and potential parity in euro-pound, a view echoed by UBS, UniCredit do not offer any specific numbers for sterling on the event of an exit.

Indeed, there are so many moving parts and unknowns we understand why this would be the case.

Goretzki is however aware that their assumption that the UK stays in the EU is fragile.

“EU negotiations concerning Schengen and the handling of the refugee crisis are ongoing, and there is a risk that any negative developments could hurt EU support in the UK,” notes the analyst.

Past experience has shown that opinion polls are sensitive to headline risk arising from various sources.

Therefore, although volatility is high in absolute terms part of it reflects global rather than UK-specific factors.

Barclays have said the impact of the EU migration crisis cannot be under-estimated and if there is a summer surge in migration UK voters could well vote to leave the EU.

Uncertainty is only heightened by the observation that polling data is unreliable with past polls having little indicative power over the outcome in the Scottish Referendum and the UK General Elections.

“Hence, GBP volatility could have further to rise in the run up to the referendum,” says Goretzki.

So while there are handsome gains to be had on a GBP recovery, buying now could be akin to catching a falling knife.

A new record was set today when it was reported 3.2 million Americans applied for unemployment support in the week ending March 21, which was well above the 1.7 million that markets were expecting, a number that amounts to more than 2% of the employed population.

The Dollar was left reeling on Wednesday as the promise of a $2 trillion virus-related aid package for American companies and households stoked global risk appetite and encouraged and unwinding of the great dash for cash that was seen earlier in March, a process that is tipped by some analysts to continue for a while yet.