"For the first time in a long while we turned positive on the pound" - Deutsche Bank.

U.S. Dollar exchange rates edged higher in the penultimate session of the week amid a rebound that has so far tempered Pound Sterling's earlier gains following a flurry of data appearing to suggest an abrupt slowdown in the world's largest economy.

Sterling had rallied to almost six-month highs after Office for National Statistics (ONS) numbers told of ongoing resilience in the UK economy but its gains over the Dollar faded after U.S. data indicated sharp December declines in industrial production, retail sales and inflation.

"The market mood soured somewhat. We’ve been snuggled up in expectations of a soft landing for the US economy, and the dollar’s been falling against everything as China reopens, and monetary policy normalises," says Kit Juckes, chief FX strategist at Societe Generale.

"With the US curve getting even more inverted, growth-sensitive currencies no longer have that soft-landing support," he adds in Thursday commentary.

While Wednesday's declines in the U.S. Producer Price Index provided another indication of the Federal Reserve (Fed) having success in its mission to force inflation back to the 2% target, tumbling industrial production and retail sales made clear the cost of that endeavour. 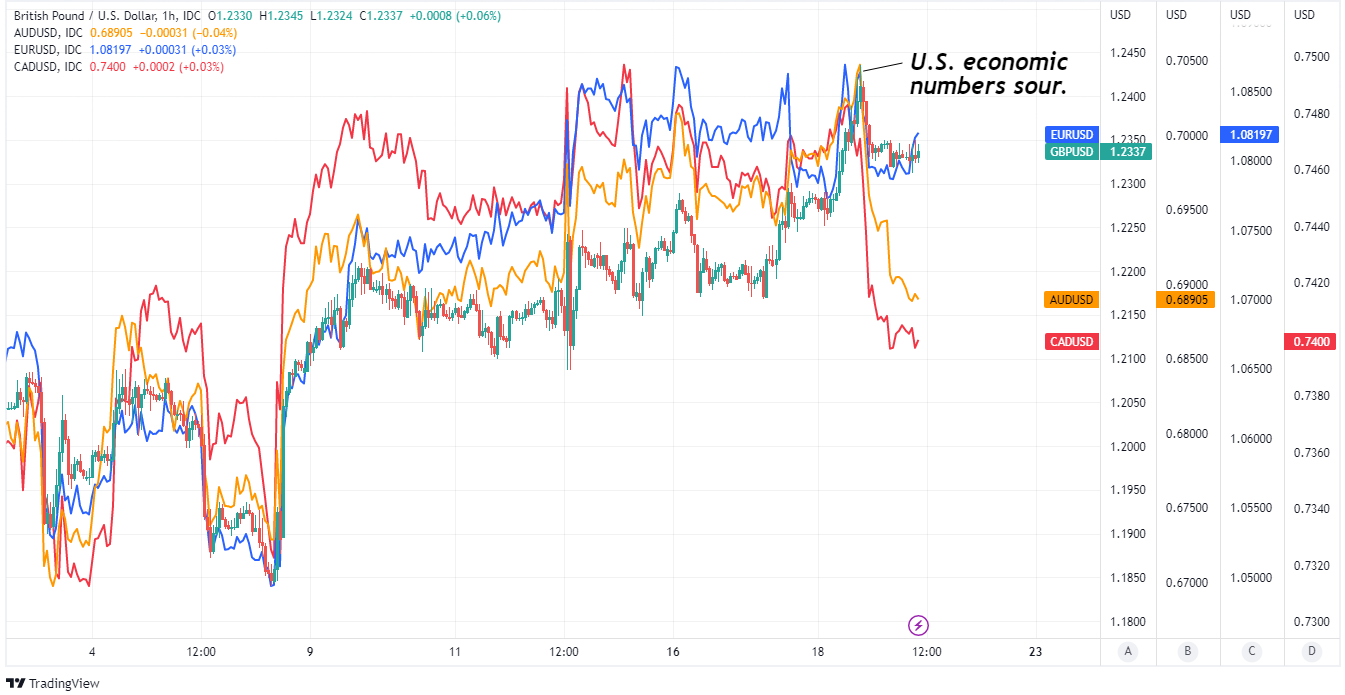 Above: GBP/USD at hourly intervals alongside AUD/USD, EUR/USD and CAD/USD. Click image for closer inspection.

Financial markets have so far wagered that a deteriorating economic picture will be enough to end U.S. interest rate rises and encourage a pivot to policy loosening through interest rate cuts later this year, though the Fed's own rhetoric suggests that is far from assured.

Meanwhile, surprise declines in December employment drove the Australian Dollar lower on Thursday as markets looked ahead to a speech from European Central Bank (ECB) President Christine Lagarde in Davos.

The speech comes after a Tuesday Bloomberg News report suggested the ECB could be likely to temper its own increase in interest rates from March, making the relevance of Thursday release of minutes from the December policy meeting questionable.

"For the first time in a long while we turned positive on the pound. The policy mix finally looks more favourable with high real rates and a much improved external balance picture compared to September," says George Saravelos, global head of FX research at Deutsche Bank.

Previously, the Pound rose most notably as expectations for ECB interest rates moderated but also appeared to benefit from profit-taking or the covering of bets against Sterling after ONS figures cast the economy in a resilient light. 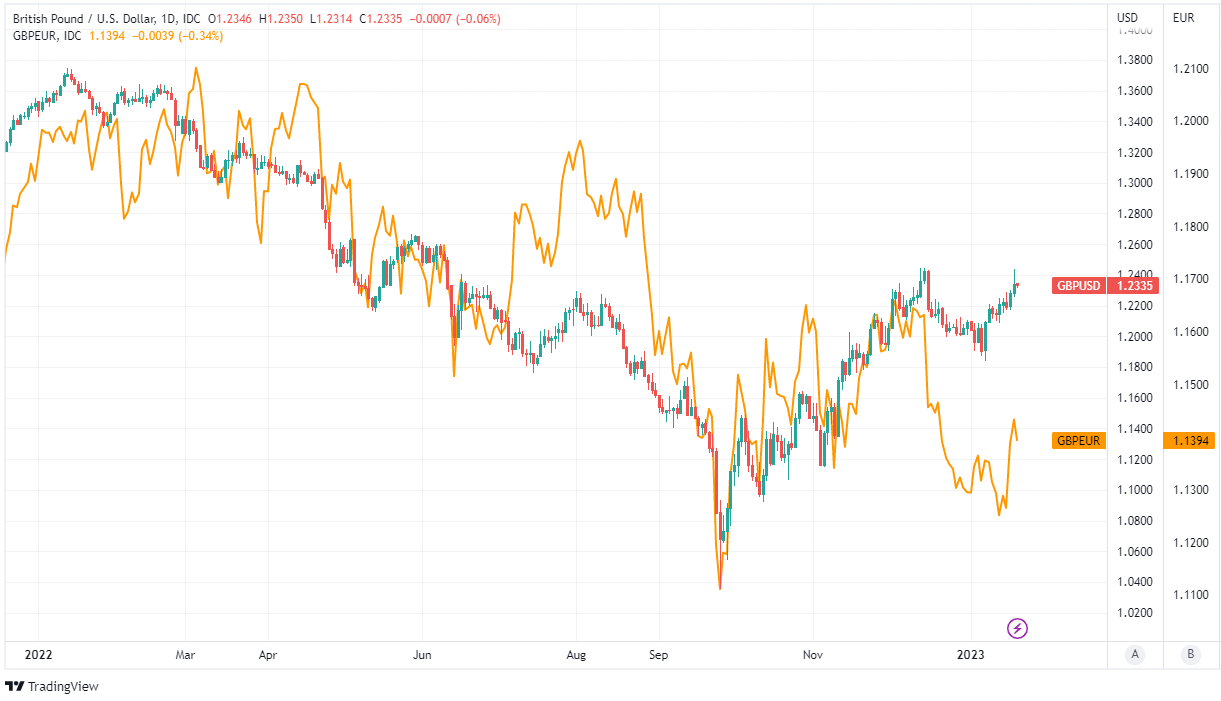 Above: Pound to Dollar rate shown at daily intervals alongside Pound to Euro rate. Click image for closer inspection.

Recent data has shown services producing companies pushing through large price increases even as household incomes are squeezed by high energy prices and despite the strongest tightening of Bank of England (BoE) monetary policy since the late 1980s.

Pay growth has also accelerated in some pockets of the labour force while GDP data suggested the economy had not deteriorated last quarter to the same extent envisaged by forecasters at the Bank of England and elsewhere.

Official data has so far suggested that resilience owes itself mainly to the consumer side of the economy while confirming downturns in the manufacturing and industrial sectors ahead of this Friday's release of retail sales figures for the month of December.

"The January labour market report (published yesterday) is unlikely to have provided relief to the BoE's concerns around the strength in wage growth and the risk of inflation persistence," says Anna Titareva, an economist at UBS.