HSBC says it is now time to bet on a Pound Sterling recovery against the U.S. Dollar, as analysts prepare for a rebound in global sentiment and say the UK's ills are now well understood and incorporated into the market.

The Pound to Dollar exchange rate (GBP/USD) has lost 12% in value over 2022 on building fears of a deep UK recession and as global equities fell into a bear market, confirming the strong positive correlation between the exchange rate and global sentiment.

However, the forces that pushed the Dollar higher over recent months are fast fading and 2023 will be a year in which the tide turns against the Greenback.

"The USD has performed very well over the last 18 months, but a number of the forces that propelled it towards its highest valuation in decades are seen losing ground," says Paul Mackel, Global Head of FX Research at HSBC.

A key driver of the Dollar's appreciation was the downward impetus to global growth, but this momentum "is starting to show signs of petering out suggesting the low point of the cycle could be approaching, especially relative to very bearish consensus expectations.".

The rapid rise of U.S. interest rates that result from the Federal Reserve's fight against inflation has been another key source of support to the Dollar, but this too should wane.

"USD rates remain elevated compared to other currencies, but the speed of further gains is likely to slow from here," says Mackel.

"A bottoming in global growth dynamics alongside and a stabilisation in yields may provide a better backdrop for risk appetite, which could further weigh on the USD," he adds.

The Pound meanwhile displays the inverse relationship to risk: when risk is 'on' the Pound rises, but when it is 'off' it falls.

"GBP has had a very strong tie to risk appetite in recent years, and so a rebound in global sentiment will also help to boost GBP from somewhat undervalued levels," says Mackel.

But there are domestic factors to consider too.

"After a volatile few months following a year of underperformance, the tide may be turning for the better for GBP. Structural weaknesses will not completely turn around overnight, but the risks are much better priced at these levels of FX and rates," says Mackel. 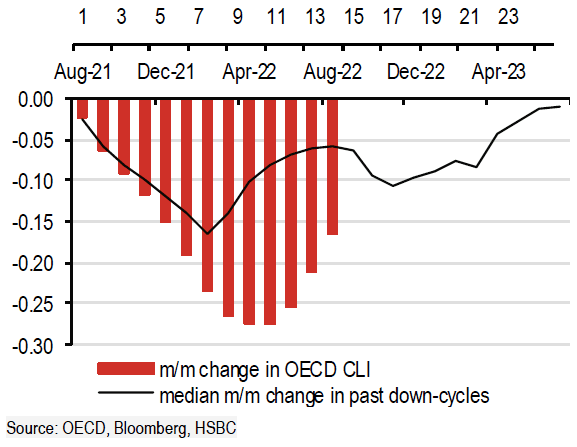 Above: "The pace of global activity weakness has been slowing in recent months" - HSBC.

The Pound-Dollar exchange rate slumped to an all-time low in September when domestic issues came to the fore: Liz Truss' ill-fated budget provided governments with a template of what not to do in a climate of rising interest rates.

Cutting taxes without explaining how they would be paid for was rejected by the markets which dumped Sterling and sent UK yields higher.

But, the new government's austere fiscal policy and recent public finance data have steadied the outlook.

Another key issue many foreign exchange analysts consider when dealing with the Pound is the UK's current account deficit: a legacy of the country's import requirements far exceeding its export abilities.

This issue became critically acute in 2022 as the gas and oil import bill ballooned, placing downside pressure on the Pound.

But HSBC's economists say there are early signs that the external accounts are starting to rebalance, albeit slowly. 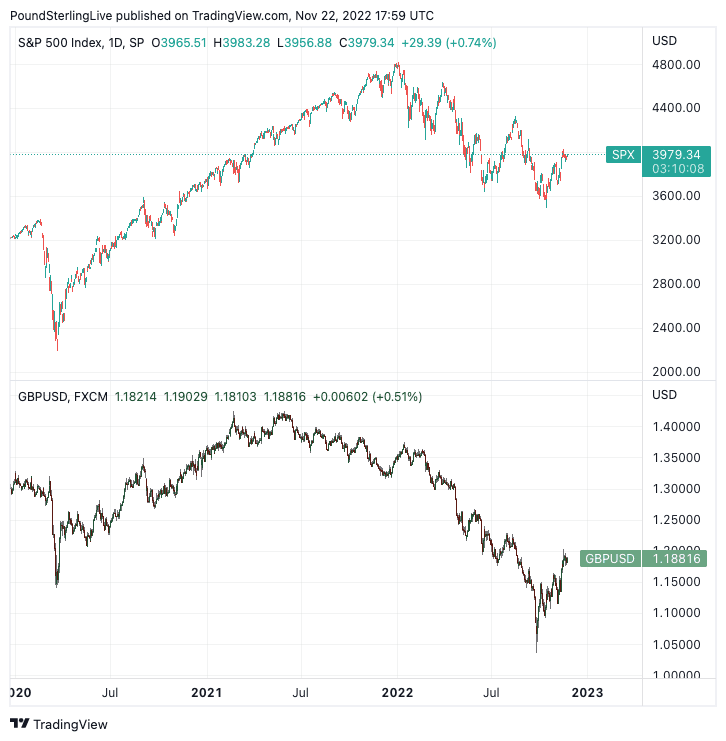 Above: A turn in the S&P 500's fortunes would correlate with GBP/USD upside. To better time your payment requirements, consider setting a free FX rate alert here.

There is also a nod towards the Bank of England, which has through the course of 2022 been accused of being reluctant in raising interest rates to the detriment of Pound exchange rates.

"Cyclically, the UK’s economic challenges are also well priced in and there is even a potentially positive risk that the BoE’s relative caution in hiking rates may turn out to be currency supportive," says Mackel.

HSBC now forecast the Pound to Dollar exchange rate to trade at 1.14 by year-end, an upgrade from their previous prediction of 1.10.

HSBC meanwhile introduces a thematic trade idea to buy Sterling against the Dollar.