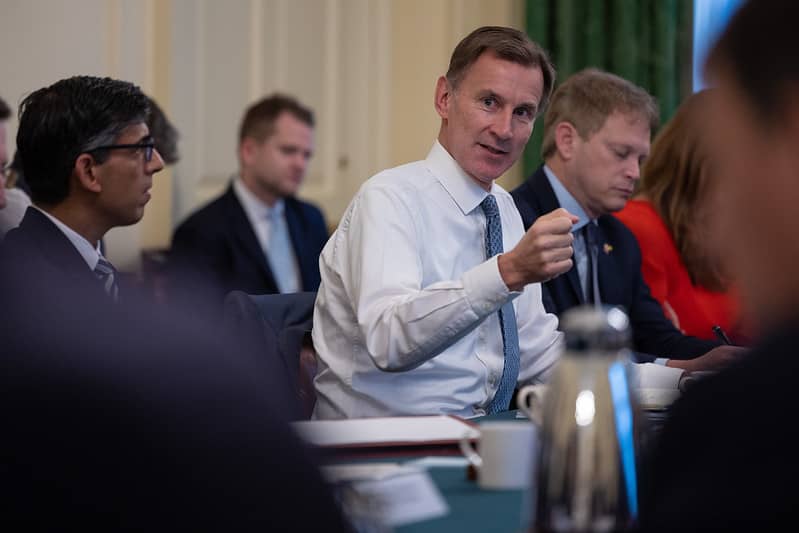 Above: The Chancellor of the Exchequer Jeremy Hunt briefs the cabinet before he delivers his Autumn Statement to parliament. Image: Gov.uk.

Financial markets approved of the UK's Autumn Statement which promised a return to fiscal credibility, but the British Pound is proving increasingly reactive to global investor sentiment which should determine near-term direction.

Chancellor Jeremy Hunt has announced £55BN - roughly 2.0% of GDP - in savings as he sought to tighten fiscal policy to ensure the country's finances remained on a sustainable footing.

The development, "appears to have been enough to satisfy the financial markets," says Paul Dales, Chief UK Economist at Capital Economics.

The bond market gave its approval as UK gilts remained well supported in the wake of the announcements.

In fact, the yield paid out by these bonds traded lower than where they were on the eve of former Chancellor Kwasi Kwarteng's mini-budget, suggesting the risk-premium triggered by that event has largely been cancelled.

"Benign financial market reaction to the Autumn Statement will be exactly what HMT would have wanted. Job done," says economist Simon French at Panmure Gordon. 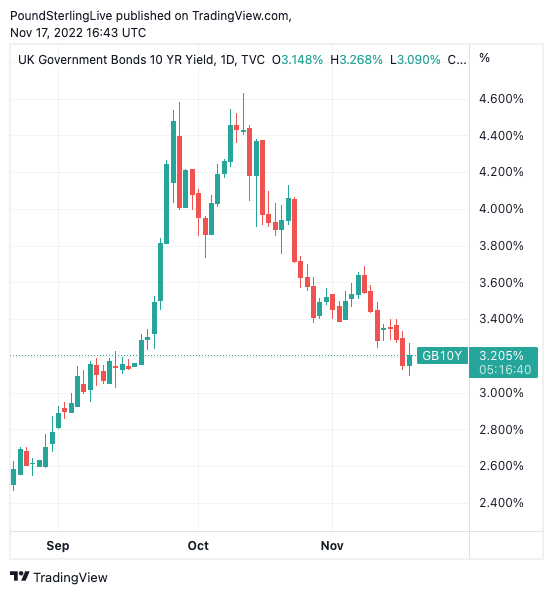 Above: The yield on ten-year gilts has fallen back to pre-mini budget levels, meaning the cost of finance in the UK has declined as markets cheer a more credible fiscal policy from the UK government.

"A flat FTSE, and GBP to EUR and USD exchange rates, represents tacit approval from financial markets, a requisite after the disastrous attempt at a mini-budget by the chancellor’s predecessor just two months ago," says Michael Field, European Equity Strategist at Morningstar.

The Pound-Euro rate looks on course to end the week slightly higher, and the Pound-Dollar rate is also slightly up on the week, consolidating the previous week's bumper gains.

Looking ahead, some analysts say markets won't welcome the prospect of fresh austerity being imposed on an already shrinking economy.

"We continue to expect GBP under-performance against most of the non-USD G10 currencies going forward," says Derek Halpenny, Head of Research for Global Markets EMEA at MUFG. "Tightening fiscal policy into a recession to weigh on GBP."

Nevertheless, most analysts say a return to a more sober and sensible approach to UK fiscal policy following the Truss-Kwarteng debacle would be welcomed by markets.

"There was few surprises – a strict, 'kitchen sink' budget had already been priced into the GBP, and bond markets tend to like austerity because it is disinflationary," says Giles Coghlan, Chief Market Analyst at HYCM.

Divining the market's reaction to the Autumn Statement was complicated by a negative day for global stock markets which betrayed an environment of poor investor confidence, creating the conditions that typically handicap the 'high beta' Pound.

Recent market moves suggest the Pound's near-term direction could now depend more on global market conditions than developments in the UK, particularly given December's Bank of England interest rates decision is only due in December. 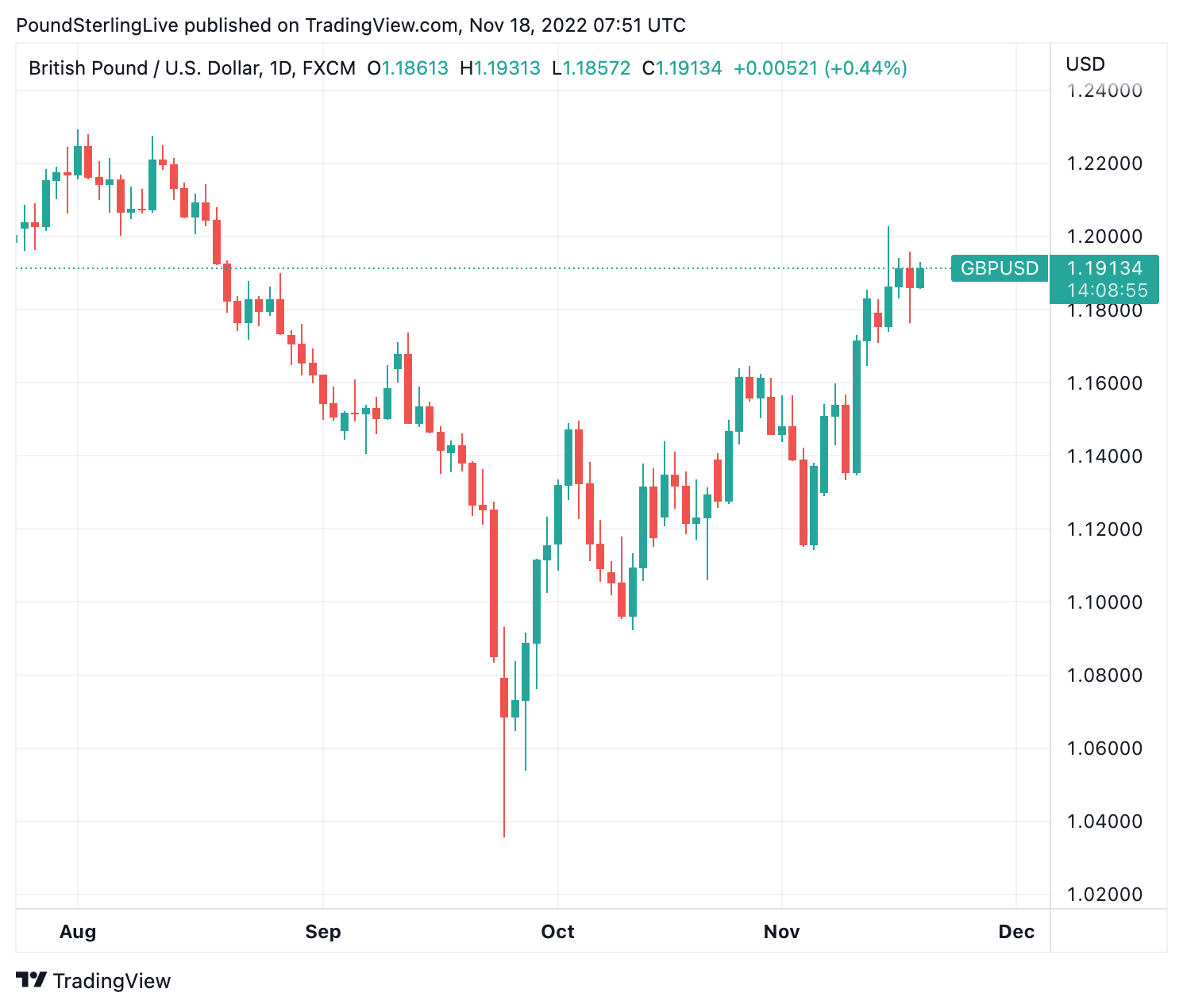 Above: GBP/USD at daily intervals. If you are looking to protect or boost your international payment budget you could consider securing today's rate for use in the future, or set an order for your ideal rate when it is achieved, more information can be found here.

Some analysts are nevertheless cautious about holding the Pound, saying the UK's unfavourable growth prospects will continue to be a headwind.

This is because one key fundamental driver of exchange rates is relative economic performance, therefore a more marked UK economic slowdown relative to other economies poses downside risks to the Pound. 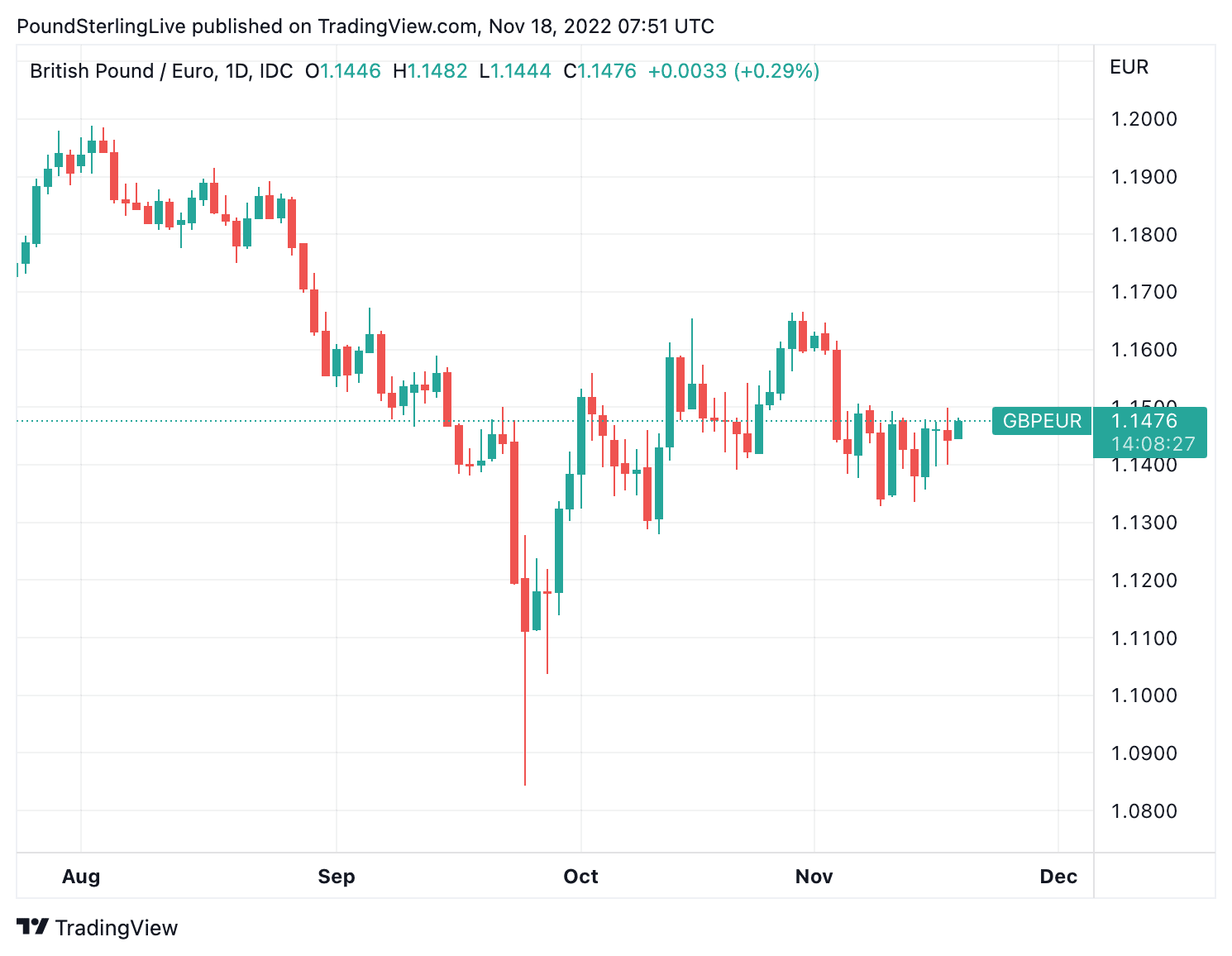 Above: GBP/EUR is consolidating ahead of its next directional move. To better time your payment requirements, consider setting a free FX rate alert here.

The Office for Budget Responsibility (OBR) released its latest pack of economic forecasts and revealed the economy was sliding into a recession which will last for just over a year, with a peak-to-trough fall in GDP of 2%.

The tighter fiscal policy that comes with the £55BN in savings announced by the Chancellor combines with the tight monetary policy created by the Bank of England which continues to raise interest rates, squeezing the economy.

Lynton-Brown says the deteriorating growth outlook is "bearish for GBP... we position for further GBP weakness via a 13-January 0.9050 – 0.9300 EURGBP call spread."

The OBR's forecasts are however notably more optimistic about the economic outlook than those at the Bank of England.

This matters for the Pound which fell following the Bank's October Monetary Policy Report where an eight-quarter-long recession was forecast.

The below chart shows the OBR's latest forecast and two forecast scenarios from the Bank: one based on current interest rate settings (dark blue) and one based on where the economy would go if interest rates were to go to 5.25%, in line with market expectations (light blue). 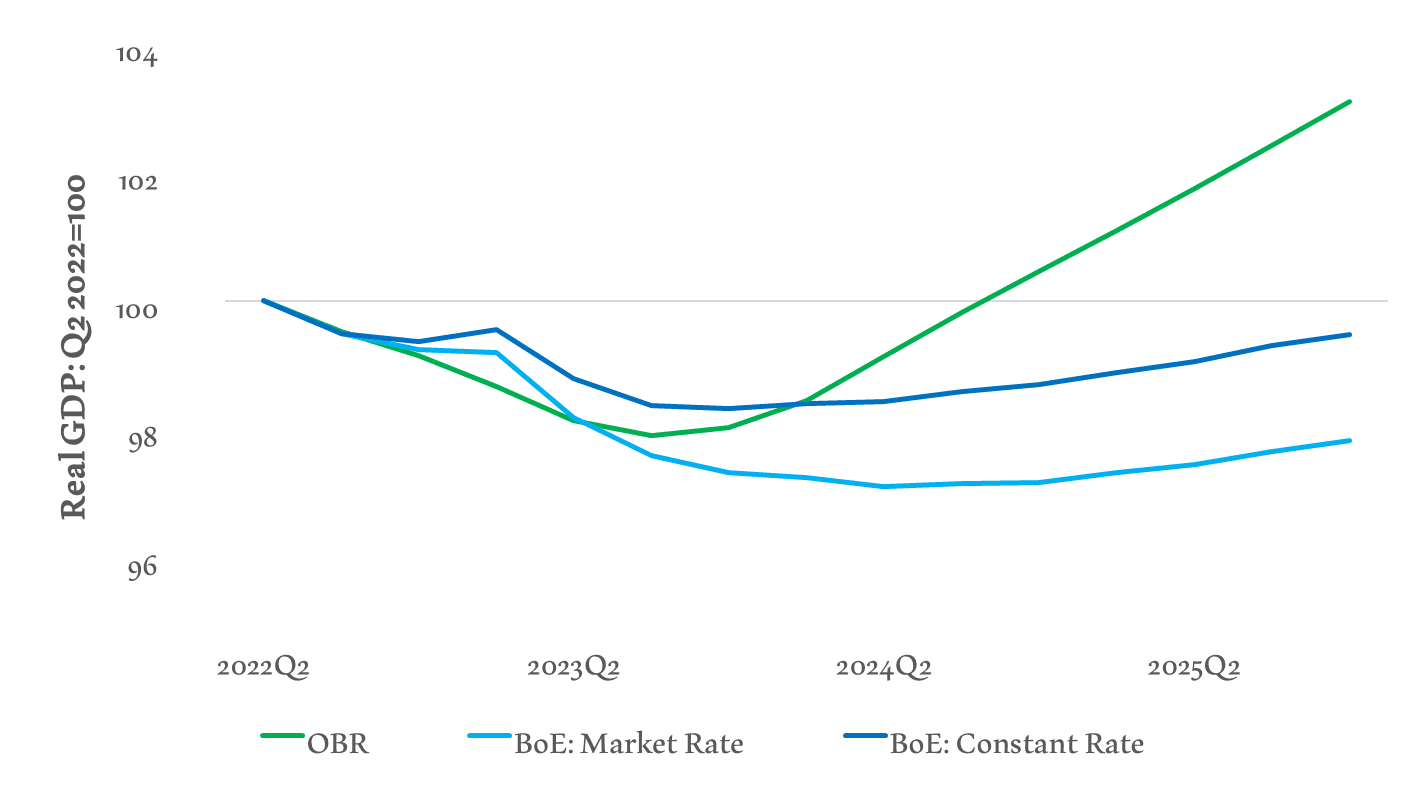 In both instances, the Bank of England is proving more pessimistic than the OBR whose forecast offers an upside surprise for foreign exchange markets.

So on the basis that surprises can influence a currency, the OBR's upside surprise could mean the Pound is better supported over the coming weeks.

Hunt and Prime Minister Rishi Sunak sought to restore economic credibility with the Autumn Statement and the market's reaction suggests they achieved this goal.

This means the remainder of the year could see Sterling's focus drift from the domestic scene to external drivers, therefore how global markets evolve from here could be the story to watch.

This is something the government would welcome given the year of turmoil that has passed.