Government borrowing in October came in at £12.7BN said the ONS, well below the £19.1BN expected, September's data was meanwhile revised lower from £19.2BN to £16.9BN.

Shaun Osbourne, Chief FX strategist at Scotiabank, says this is "positive news at the margin" for Pound Sterling.

The ONS said the £13.5BN borrowed in October 2022 was £4.4BN more than in October 2021 with a good portion of the rise coming from the government's commitment to cap household energy bill payments. 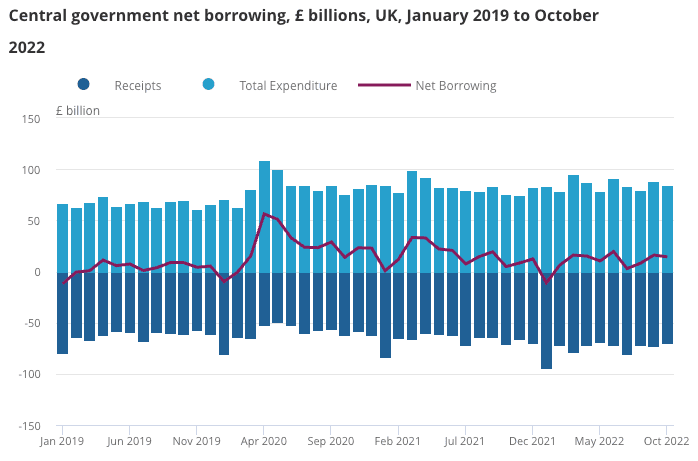 On current trends, public borrowing is on course to land around £132BN for 2022/23, which is well below the Office for Budget Responsibility's £177BN forecast.

"We'd look at the data as another near-term stabilising force for the GBP," says Stephen Gallo, Head of European FX Strategy at BMO Capital Markets.

The Pound fell sharply in September after the government of Liz Truss announced a massive fiscal easing due to a series of tax cuts.

These cuts were unfunded, meaning they would have to be covered by new borrowing, leading markets to worry the UK's public sector finances would become unsustainable.

But the new government of Rishi Sunak has recommitted to stability with a new austere budget, calming markets and helping the Pound maintain a recent rally.

Gallo said this newfound stability "may even trim its beta vs the broader G10 space". Gallo currently favours the Pound to advance against the Euro on a 1-2-week horizon, targeting the Pound-Euro exchange rate at 1.1765.

Despite the decent outcome in the most recent borrowing figures, Gallo points out some negatives, including a 1.0% year-on-year contraction in central government tax receipts, which could signal a slowing economy.

"For a start, borrowing will be boosted in November by the payment of the second Cost of Living grant to low-income households," he says.

In addition, the cost of the Energy Price Guarantee and the Energy Bill Relief Scheme for businesses will increase in the first quarter, because wholesale prices are higher over the peak winter period.

"What's more, the downturn in GDP will start to slow the growth rate of tax receipts and put some upward pressure on benefits spending towards the very end of this fiscal year. As a result, today's data look broadly consistent with the OBR’s latest forecast," says Tombs.

Despite the challenges ahead, Gallo says "as far as financial stability risks are concerned, the October data support the view that 'peak stress' is behind the GBP".