The British Pound will continue to lose value against the U.S. Dollar from current levels say foreign exchange strategists at JP Morgan.

Justifying forecasts for a weaker Pound against the Dollar, JP Morgan says UK inflation remains the highest in G10 while economic growth into 2023 will undershoot most peers.

"The domestic cyclical outlook will continue to plague sterling’s prospects, even with a fiscal boost," says Paul Meggyesi, a currency analyst at JP Morgan. "Meanwhile, the BoE looks unlikely to arrest downward GBP pressure on its own."

UK inflation is not expected to peak until October say economists, citing the timing of the next Ofgem energy cap uplift.

JP Morgan expects UK CPI inflation to come close to 11% year-on-year at this point, confirming the UK economy' "cyclical prospects are still grim - and indeed, project as the second-lowest in G10 on a cumulative-growth basis over the next six quarters through 2023 ".

"So while the BoE has signalled a willingness to speed up its rate hiking – possibly in August with 50bps – the trade-offs that have until this point warranted a more gradual pace of hikes look set to persist, and so long as that’s the case, GBP should continue to trade dislocated from nominal policy," says Meggyesi.

Regarding the U.S. Dollar outlook, the multi-month bull run is not yet over says JP Morgan.

"We have been recommending a defensive and long USD stance in currencies all year, given the combination of soft growth, high inflation and tightening monetary policy," says Meera Chandan, a global FX strategist at JP Morgan in London.

"Developments in the past month - even more hawkish central banks including the Fed, plummeting PMI and consumer confidence, rising energy prices in Europe - all reinforce this stance," she says.

JP Morgan forecasts the Pound to Dollar exchange rate at 1.15 by year end and 1.16 by the end of March 2023. For those looking to secure current rates, foreign exchange specialists at Horizon Currency say they are currently delivering spot rates at between 40 and 50 pips away from the market.

Pound Sterling started July deep in the red against the Dollar going below 1.20 amidst a major decline in UK government bond yields.

The decline is a sign the market is paring back its expectations for future Bank of England interest rate rises.

The UK ten year government bond yield fell 5.0% on July 01 and was back to levels seen on May 31. 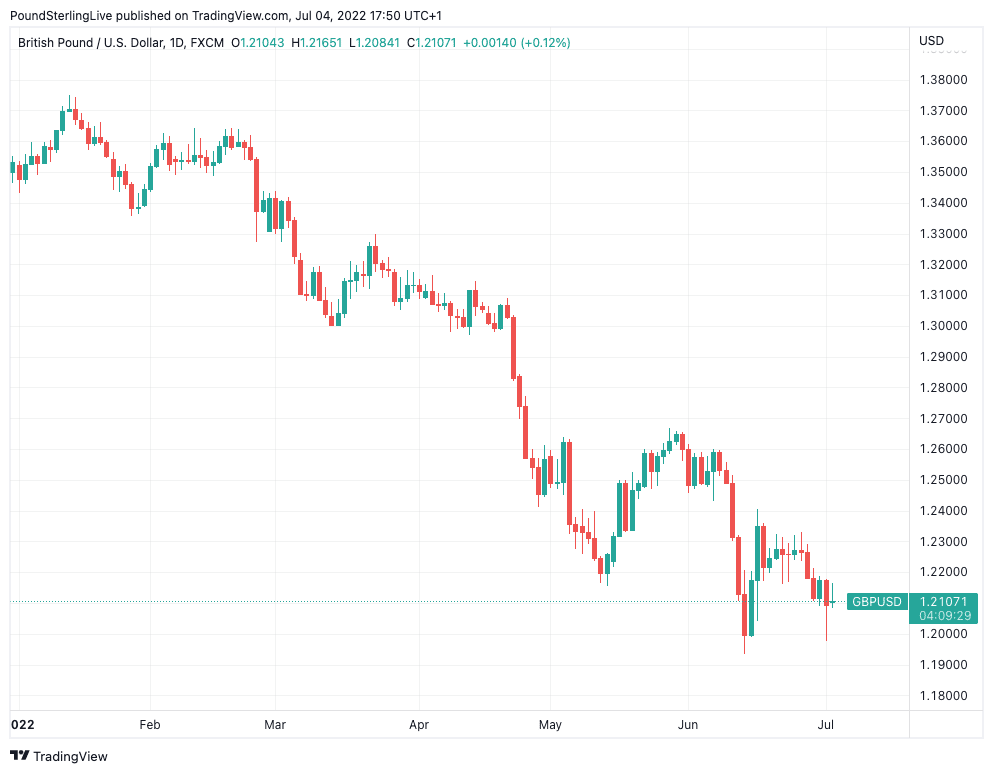 The bet is the Bank of England won't raise interest rates as far as markets were originally thinking as it tries to balance the need to control inflation with falling economic activity.

Foreign exchange strategist Jordan Rochester at Nomura says he is looking for the Pound-Dollar exchange rate to fall to 1.18, citing four reasons.

1. The UK’s trade deficit is widening, with the rise in energy prices and Brexit weighing on trade, as per Thursday's current account data release.

Rochester says financial flows are also less supportive, with net FDI outflows, but also rising EGB yields potentially closing the gap on the EUR/GBP carry trade, which has built up in corporate lending over the years.

2. The Bank of England. Nomura finds UK monetary policy likely to be relatively dovish vs peers, i.e. the Bank will hike less from here than others.

3. Rochester says the UK government has raised taxes significantly and done less in the way of energy subsidies.

Furthermore, political anxieties persist with the Nomura analyst citing the Northern Ireland protocol clash with the EU, Boris Johnson’s leadership and longer-term ideas such as an independence referendum for Scotland next year may weigh on investment flows.

4. Positioning isn't a headwind. "Short GBP FX positioning is lighter than you might think: Take a quick look at non-commercial positioning in GBP and it’s roughly $5bn of net shorts," says Rochester.

He says FX tends to trend-revert and usually these levels of positioning don’t hold for long and so GBP may stage a rally.

"However, if we look at a breakdown of positioning it is not as price sensitive as it would usually be with the large majority of net shorts in GBP held by real money investors. Meanwhile, leveraged investors are actually net long GBP (roughly $1bn). This substantially lowers the risk of a position squeeze," he adds.