Pound Sterling started July deep in the red against the Dollar and Euro, and further losses are likely says a leading analyst.

Declines come alongside a major decline in UK government bond yields, a sign that the market is paring back its expectations for future Bank of England interest rate rises. 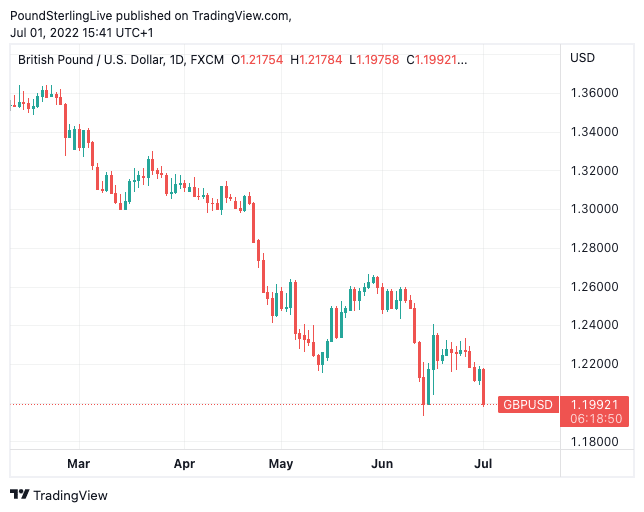 Above: GBP/USD at one day intervals.

The UK ten year government bond yield fell 5.0% on July 01 and was back to levels seen on May 31.

The bet is the Bank of England won't raise interest rates as far as markets were originally thinking as it tries to balance the need to control inflation with falling economic activity. 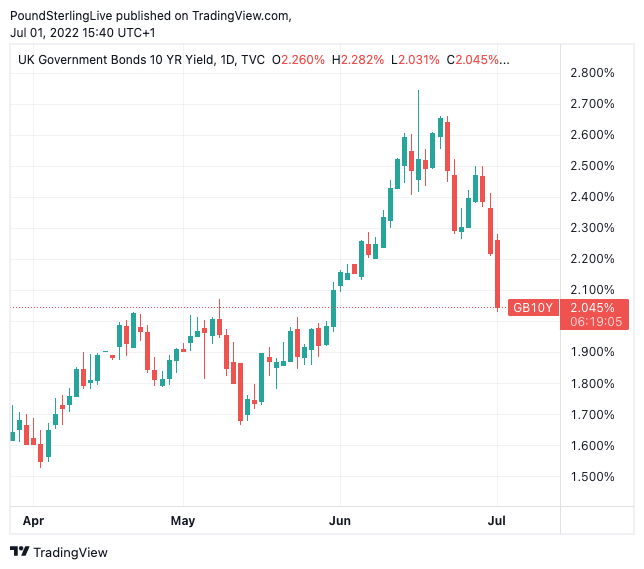 Above: The yield on ten year UK government bonds is falling rapidly.

"Sterling wilted to two-week lows as pessimism about the world economy spurred a flight to safety in the greenback. Consequently, the pound was on track for a losing week, its fourth in five weeks," say Joe Manimbo, Senior Currency Analyst at Western Union.

The Dollar meanwhile extends a now well established bull run that sweeps aside all before it.

Simply put, there is little reason to bet against the Dollar right now.

"Given the pessimism that seems to prevail at present, it is hardly surprising that the dollar is enjoying fresh safe haven flows. Even without strong inflation the greenback has plenty to recommend it as thoughts turn to global recession, but the solidly of price rises means that the dollar’s appeal is as strong as it was at the beginning of the year," says Chris Beauchamp, chief market analyst at IG.

Foreign exchange strategist Jordan Rochester at Nomura says he is looking for the Pound-Dollar exchange rate to fall to 1.18.

1. The UK’s trade deficit is widening, with the rise in energy prices and Brexit weighing on trade, as per Thursday's current account data release.

Rochester says financial flows are also less supportive, with net FDI outflows, but also rising EGB yields potentially closing the gap on the EUR/GBP carry trade, which has built up in corporate lending over the years.

2. The Bank of England. Nomura finds UK monetary policy likely to be relatively dovish vs peers, i.e. the Bank will hike less from here than others.

3. Rochester says the UK government has raised taxes significantly and done less in the way of energy subsidies.

Furthermore, political anxieties persist with the Nomura analyst citing the Northern Ireland protocol clash with the EU, Boris Johnson’s leadership and longer-term ideas such as an independence referendum for Scotland next year may weigh on investment flows.

4. Positioning isn't a headwind. "Short GBP FX positioning is lighter than you might think: Take a quick look at non-commercial positioning in GBP and it’s roughly $5bn of net shorts," says Rochester.

He says FX tends to trend-revert and usually these levels of positioning don’t hold for long and so GBP may stage a rally.

"However, if we look at a breakdown of positioning it is not as price sensitive as it would usually be with the large majority of net shorts in GBP held by real money investors. Meanwhile, leveraged investors are actually net long GBP (roughly $1bn). This substantially lowers the risk of a position squeeze," he adds.