Pound Sterling remains vulnerable to further losses against the Dollar as long as geopolitical tensions remain elevated and investors bet that the Federal Reserve will this month embark on a series of interest rate rises.

The Pound to Dollar exchange rate has fallen to its lowest level since November 2020 at 1.3087 at the time of writing on March 08 and analysts say further losses are likely.

"GBP will be entirely driven by developments in the Ukraine," says a weekly research note from Barclays. "We expect GBP to remain under pressure vs G10 commodity and safe haven currencies as long as the conflict continues to escalate."

Declines in Pound-Dollar come despite a more optimistic investor tone on Tuesday. Stocks were bought amidst a combination of relief that Western nations don't look set to ban Russian energy and that Ukraine and Russia are set to negotiate further on Thursday.

This is nevertheless a nervous market that remains driven by headlines relating to the war in Ukraine, meaning any Dollar weakness will likely prove shallow.

Above: GBP performance relative to other majors over the past month.

The war invasion has dealt a negative shock for British Pound valuations as it is the third-worst performing G10 currency when screened over the past month.

Further underperformance is likely as long as the conflict continues.

By contrast the Dollar has been one of the major beneficiaries and will continue to outperform should investors continue to liquidate investments and downgrade global growth expectations.

"There is little sign that the USD is set to stabilise and the risk of a near-term overshoot is high, even for a dollar which is already over-valued," says Daragh Maher, Head of Research, Americas, at HSBC.

"The tailwinds to the USD are coming from two interconnected features, namely, the ongoing geopolitical uncertainties and the downside risks to global growth," adds Maher.

Although Russia is a relatively small economy it is a significant supplier of commodities to the global economy. 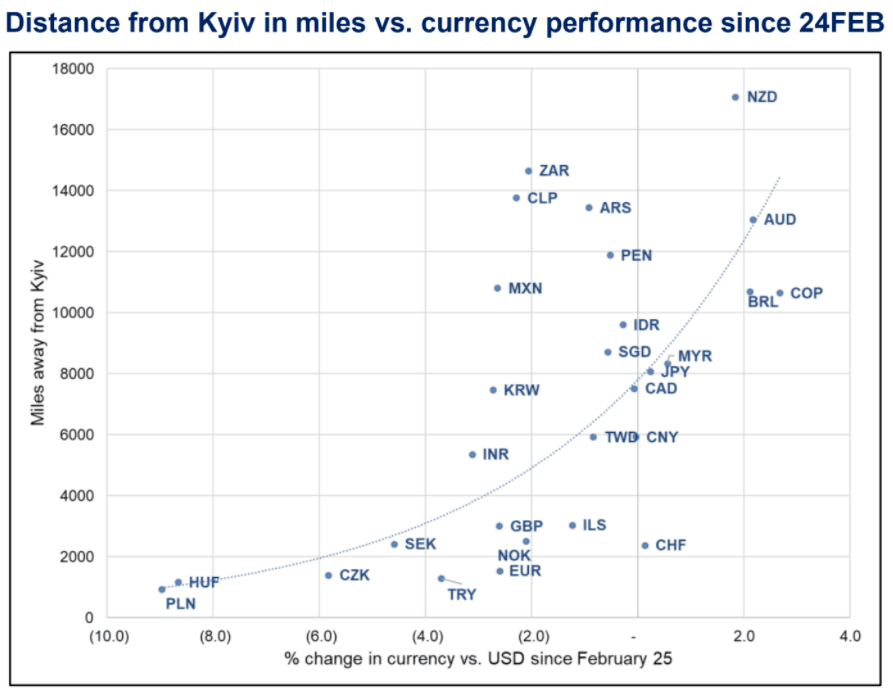 Nearby European countries are obvious casualties of the war given their greater dependence on Russia for energy supplies: gas prices have surged to new records this week and this will heap further inflationary pressures on Eurozone and UK consumers.

Oil prices meanwhile spiked at the start of the week in unruly market conditions as traders feared a boycott or ban on Russian energy by the U.S. and EU.

"The price of oil has climbed higher on the fear of Russian supply disruption. The market has traded the current geopolitical situation as an asymmetric commodity shock for Europe," says Barclays.

"The USD has benefited from global risk aversion. The escalation of military action in Ukraine can continue to favour safe havens as JPY, CHF and the USD," adds the note.

By selling the Euro and Pound markets are betting that the European Central Bank and Bank of England will ease the pace at which they intend to raise interest rates, depriving their respective currencies of support against the U.S. Dollar.

This is because the U.S. is less exposed to the conflict and markets are confident the Fed will hike rates in March and continue to do so throughout the remainder of the year.

"The war could deepen the divergence in monetary policy, with the Fed poised to raise the funds rate 25bp in March, and the ECB likely delaying the end of QE. This should keep the USD well supported vs European FX and high-beta currencies," says Barclays.

The Pound-Dollar exchange rate is caught in a technical downtrend and most analysts see further losses as being likely until such a time as there is a clear signal the geopolitical setup has reached its nadir.

What might concern those wanting a stronger Pound relative to the Dollar is that GBP/USD has failed to go materially higher during times of improving sentiment.

Markets started the new week deep in the red but ultimately recovered losses alongside confirmation Germany would not pursue an energy embargo against Russia.

Furthermore, Ukraine and Russia completed a third round of negotiations while also confirming a high level meeting would take place in Turkey on Thursday.

For now price action would suggest Pound-Dollar is a loser, whatever the weather.