The Dollar almost cleared from the market the last semblances of resistance to its resurgence on Friday when besting all other major currencies, after the Federal Reserve (Fed) called time on an almost year-long reprieve from some of the onerous capital requirements typically imposed on commercial banks.

Pound Sterling had been having another look toward the 1.40 handle against the Dollar on Friday while any other currencies still offering a modicum of yield were also rising against the U.S. unit, although most notably the commodity currencies like the Canadian and Australian Dollars.

But all that changed when the Fed said in an unscheduled statement "the temporary change to the supplementary leverage ratio, or SLR, for depository institutions issued on May 15, 2020, will expire as scheduled on March 31."

"There is some debate about whether ending the SLR exemption will lead to selling of Treasuries by banks, but what is obvious is that the Fed is confident to let things move now and this means we should be seeing higher yields," says Neil Wilson, chief market analyst at Markets.com. "Sterling is weaker as the dollar has come back to life with the uptick in yields supportive of the greenback. GBPUSD sank to around 1.3850 at pixel time to test the low of Wednesday. A breach here calls for a retest of the 1.380 area."

The Fed and others had announced on May 15 last year that commercial lenders would when calculating how much capital they need to hold for compliance with a "supplementary leverage ratio" rule, be able to exclude U.S. government bonds and deposits with Federal Reserve banks. 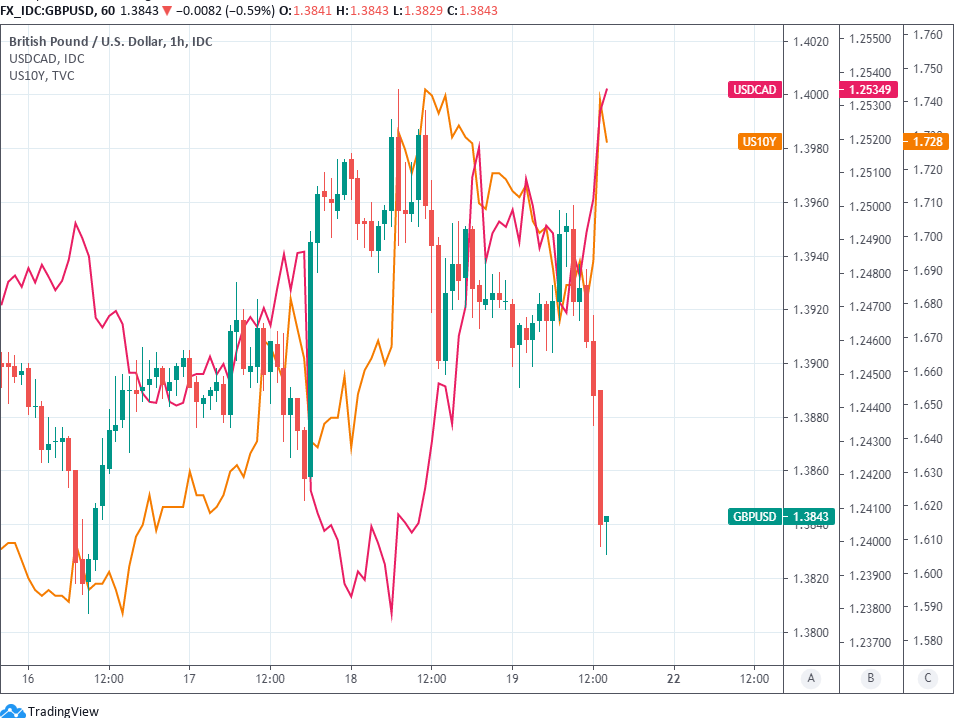 This had the effect of enabling banks' to use more balance sheet for lending to companies and households if they wished to, and was decided in order to support lending to the real economy. But ending the temporary change now has the implication of forcing those lenders to make an awkward choice.

They can now either raise regulatory capital at the expense of new lending to the real economy, or elect to simply sell-down their holdings of U.S. government bonds. This latter option would further lift bond yields and the U.S. Dollar in price action similar if-not the same as that seen on Friday.

If banks weren't already doing this Friday then markets may have anticipated they will start doing it before or after the March 31 expiry of the temporary relief. However, it's not clear whether these latest moves would be sustainable on those grounds alone given that commercial lenders would struggle to find alternative assets that do not also incur regulatory capital obligations. 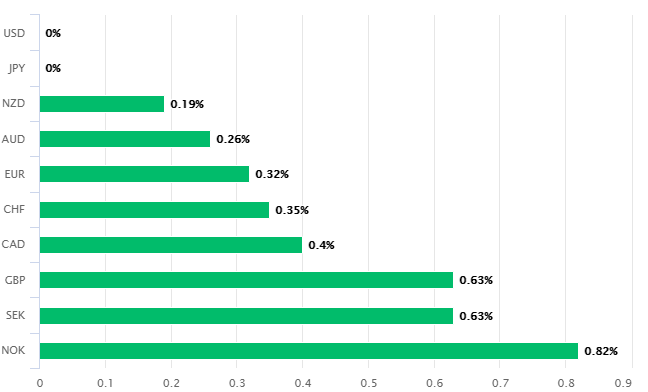 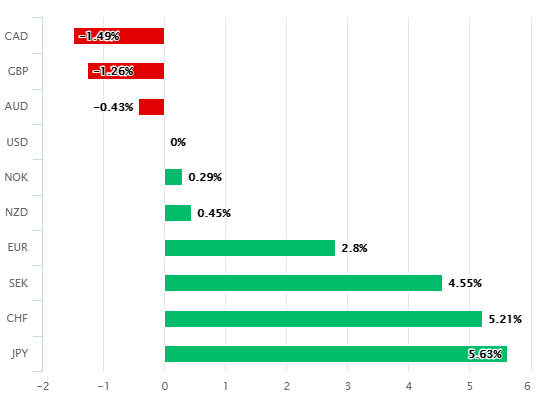 Above: U.S. Dollar against major currencies on Friday (left) and in 2021 year-to-date.

"The rule requires them to hold a minimum ratio of 3 percent, measured against their total leverage exposure, with more stringent requirements for the largest and most systemic financial institutions," reads a May 15 2020 joint statement from the Board of Governors of the Federal Reserve System, the Federal Deposit Insurance Corporation and the Office of the Comptroller of the Currency. "Any depository institution subsidiary of a U.S. global systemically important bank holding company or any depository institution subject to Category II or Category III capital standards may elect to exclude temporarily U.S. Treasury securities and deposits at Federal Reserve Banks from the supplementary leverage ratio denominator. Additionally, under this interim final rule, any depository institution making this election must request approval from its primary Federal banking regulator prior to making certain capital distributions [dividend payments to banks' shareholders] so long as the exclusion is in effect."

Dollars were bought in the wake of Friday's decision, leading many currencies to swing from gains to losses ahead of a speech from Fed Chairman Jerome Powell that's scheduled for 18:00 London time.

"It feels like it should be a quiet finish to the week for the USD (famous last words)," says Daragh Maher, head of FX research and strategy for the Americas at HSBC, in an earlier note. "The challenge for the BoJ was once again laid bare, with the release of CPI data overnight showing -0.4% YoY on the headline and ex-fresh food readings for February. GBP-USD continues to track sideways in a 1.38-1.40 range, uninspired by improving consumer confidence and unperturbed by surging government borrowing." 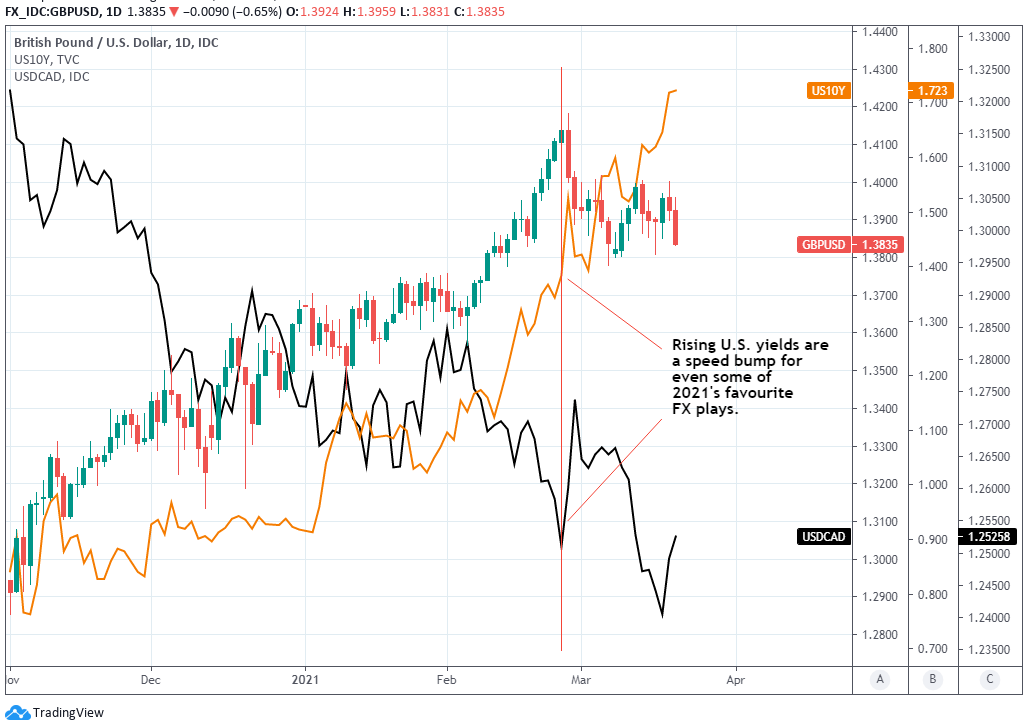 "The Fed sent a dovish signal, as the median 'dot' continues to signal no rate hike through 2023. However, we expect it is a matter of months before the Fed starts to move in a more hawkish direction," says Valtteri Ville Ahti at Danske Bank. "We now expect the Fed to start discussing tapering [its quantitative easing programme] in Q4 21 and actual tapering in Q1 22."

Chair Powell and colleages revised up their forecasts for the U.S. economic recovery and indicated they're as comfortable as ever with the level of American bond yields, some of which have doubled this year. But Powell did go to lengths to encourage investors and markets more broadly to accept that interest rates are likely to remain at the 'zero lower bound' for years yet.

This was in defiance of investors' wagers suggesting it might abandon its new average-inflation-targeting strategy as soon as next year. Investors are betting that rather than sit back and watch U.S. consumer price growth rising above the 2% target for as long as policymakers deem prudent, that policymakers would take fright at the sight of returning inflation and as a result rush into a series of premature, if-not panicky interest rate rises.