The Dollar is rising alongside the yield paid on U.S. government treasury bonds once more, a sure sign that the market might not have fully bought into the Federal Reserve's message delivered at its March policy meeting.

Fed Chairman Jerome Powell and his associates on Wednesday signalled to markets that they see any rise in inflation over coming months as temporary and that interest rates were unlikely to rise until at least 2023.

The message was at first eaten whole by markets which bought government bonds and temporarily drove their yield down in the process.

The Dollar tagged along and went lower, allowing stock markets to rally. 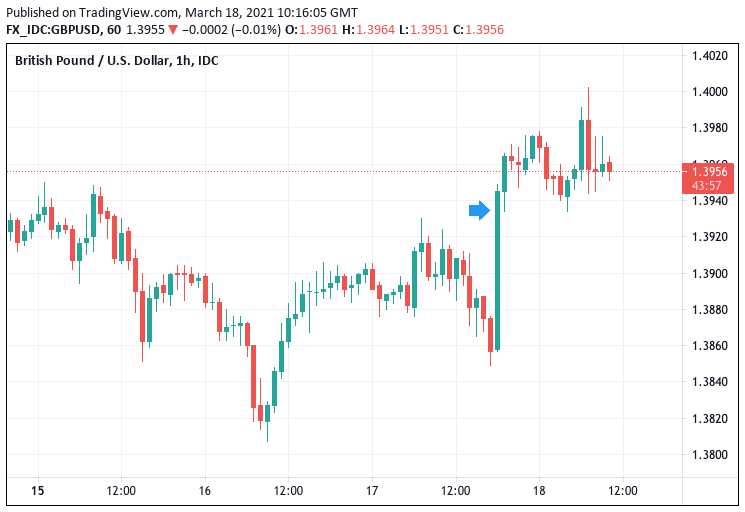 Above: GBP/USD rallies during the Fed's FOMC on Wednesday

The reversal in fortunes for bond yields and the Dollar in the Thursday trading session is incredibly important in that it suggests the market is potentially no longer buying the Fed's message, thereby opening the door to further Dollar strength.

The Fed's FOMC opted to keep interest rates close to zero while their forecasts for future interest rate levels revealed expectations for them to remain near current levels until 2023.

A mere two (out of 17) additional members now expect a rate rise above previous forecasts by the end of 2023.

"There are two possible interpretations of this monetary policy decision and in the 12 or so hours that have unfolded since the decision was made by the US monetary authority, we have seen both," says Charles Porter, Foreign Exchange Analyst at SGM Foreign Exchange Ltd.

Porter says the first interpretation is for the market to take the Fed’s predictions of underwhelming inflation below target over the medium run at face value.

"It is therefore to concur with Chairman Powell that inflation later this year will be transitory and more accommodative policy is required to stimulate the economy during the bounce back from the pandemic despite the additional fiscal stimulus that Biden’s Presidency has so far provided," says Porter in a daily research briefing.

He says that the market's decision to sell the Dollar in the wake of the Fed's meeting indicates that investors initially bought the message that inflation is not an issue and tapering of the quantitative easing programme is not something that is required at this point.

But given that the Dollar has recovered somewhat and bond yields have since risen again, another interpretation could be taking hold.

According to Porter, another interpretation is for the market to stick to its guns and continue to forecast higher inflation alongside the upward revisions to GDP growth that we have seen so far this year.

"From this perspective the Federal Reserve has allowed the fuel of easy monetary policy to continue to spill into the fire of an economy positioned to overhead with above target price inflation," says Porter. "Under this interpretation the Fed has opted deliberately to fall behind the curve and leave itself vulnerable to be led by, rather than leading, the market."

If investors continue to expect higher inflation over coming months and years to be stubborn, then it could be expected that yields continue to rise and the Dollar remains relatively supported. 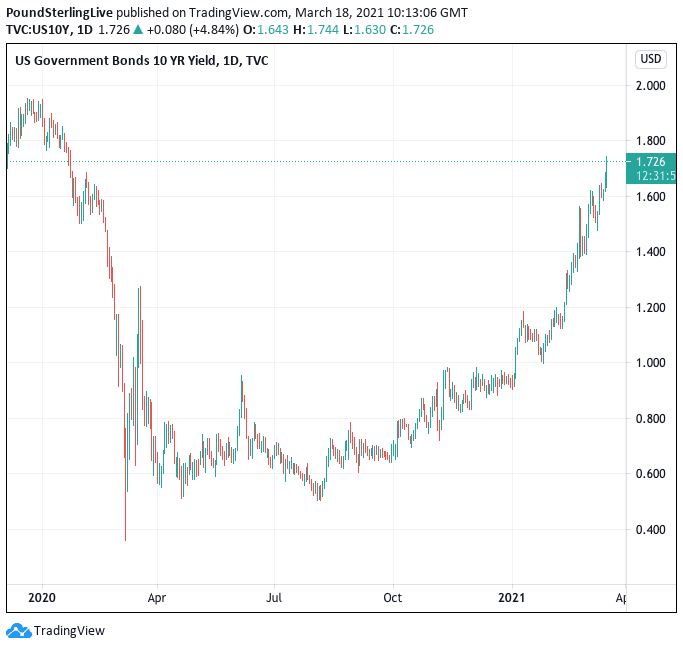 Above: The yield paid on 10-year treasuries continues to rise

"The market realised that lower for longer actually exacerbates their projected inflation overshoot and undermined the demand for US treasuries at current valuations and pushed yields higher," says Porter.

The yield paid on U.S. Treasury bonds continue to rise and have reached a new post-pandemic high in excess of 1.74% on Thursday.

Higher yields in the U.S. piques the attention of foreign investors who divert capital into the U.S. to take advantage of improving returns on U.S. monetary assets.

This in turn creates a bid for the Dollar.

"The market is therefore betting that the Fed will have to blink at some point. Until it does, the Dollar should continue to strengthen in line with rising yields and the bet that the US will have to normalise policy first," says Porter.