- GBP/USD in a losing streak
- One technical target located at 1.3778
- Goldman Sachs says bearish USD case still with us

The U.S. Dollar is now the best performing G10 currency of the past week and analysts say that those watching Pound Sterling should be prepared for a deeper near-term correction lower before the current impulse of selling subsides.

The Pound-to-Dollar exchange rate (GBP/USD) peaked at 1.4243 on Wednesday Feb. 24 before retracing back to current levels at 1.3886, as a multi-day reversal deepens.

"Sterling is falling for a fourth day straight versus the dollar and is approaching a key support zone located on an upward sloping trend line. A break below the $1.37-$1.38 area could open the door to a significant slide lower," says George Vessey, a foreign exchange analyst at Western Union Business Solutions.

The British Pound has not suffered any significant fundamental setback but is instead treading water against most currencies following a strong start to 2021, leaving it exposed to any U.S. Dollar resurgence.

That resurgence is playing out now and data shows that the U.S. Dollar is the best performing major currency of the past week, confirming some genuine demand for the unit is at play: 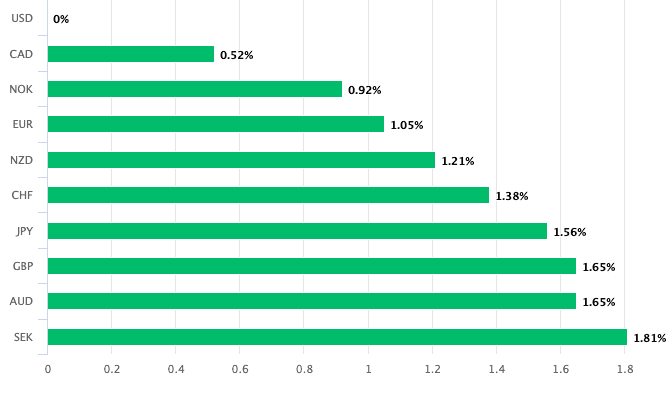 Above: The Dollar has advanced on all its rivals in the past week.

Investor attention over the past ten days has been focussed on the rise in global bond yields, particularly the rise in the yield paid on U.S. ten-year treasury bonds.

The Dollar typically benefits in an environment where the rate of appreciation in U.S. yields outstrips those of other countries.

The rise in yields reflect investor expectations for strong U.S. growth over coming months as well as stronger-than-expected levels of inflation. Therefore bond holders are asking for a higher return on their holdings, reflected in rising bond yields, to hold these assets in a higher inflation environment.

The rise in yields also reflect an expectation that the U.S. Federal Reserve is likely to bring forward the time it cuts back its quantitative easing programme and begins to raise rates again.

The Fed could start to 'taper' its bond purchases under the quantitative easing programme as early as September says ING; developments that all lend themselves to a stronger Dollar environment.

"The expected time to the first rate hike by the Federal Reserve has cratered to just 18 months, underpinning that investors worry about central bank tightening," says Jeroen Blokland, Head of Multi Asset at Robeco.

Blokland does not however believe this expectation adopted by the market to play out.

How the Dollar trades from here could therefore depend on whether the ascent of U.S. bond yields continues.

Analysts at Goldman Sachs say the developments of recent weeks are unlikely to last, and the pressures that drove the Dollar lower in the second half of 2020 are likely to reassert.

"The global cyclical rebound should result in broad Dollar weakness despite a strong US economy," says Zach Pandl, an economist at Goldman Sachs in New York. "Despite the recent volatility in rates markets, we do not think rising real rates will meaningfully support the broad Dollar."

From a technical perspective, the strong momentum behind the GBP/USD through February appears to now have run its course and the period of retracement could play out further in the short-term.

"GBP/USD recently failed just ahead of its initial target at 1.4240 (1.4245 is the March 2018 high) and we would allow for a deeper correction lower," says Karen Jones, head of technical analysis at Commerzbank in London.

Jones says dips lower should find some support at the 2-month uptrend at 1.3778.