Above: Health Secretary Matt Hancock holds a press conference at No10 Downing Street. The success of the vaccination programme has been credited with aiding GBP higher. Picture by Simon Dawson / No 10 Downing Street

Analysts at NatWest Markets and Barclays have told clients the Pound's recent strong run against the Euro, Dollar and other major currencies might be running low on fuel as the country's vaccination advantage becomes a spent theme.

The call comes just days after the Pound reached new multi-month highs against the Euro and Dollar before falling back again.

"Many positives are in the price of the overvalued and overbought GBP in our view," says Valentin Marinov, Head of G10 FX Strategy at Crédit Agricole. "The GBP has little else to offer beyond its apparent vaccine advantage." Read: "Time up for Sterling's Stellar Run says Crédit Agricole"

At the heart of any argument that the Pound might be running out of new reasons to climb is the UK's vaccination programme, which has delivered at least one dose to 20 million people, meaning a third of the population will soon have a high degree of protection to hospitalisation caused by Covid-19.

"GBP and CLP were the obvious winners in the recent weeks, with speedy coverage and declining new infection in the country, along with diminishing Brexit uncertainty for GBP and higher copper price for CLP," says Ashish Agrawal, an analyst with Barclays in London..

Agrawal says a look at the share of the population who have received at least one dose of the vaccine reveals Israel, UK, Chile and the US are leading the other countries by a large margin: 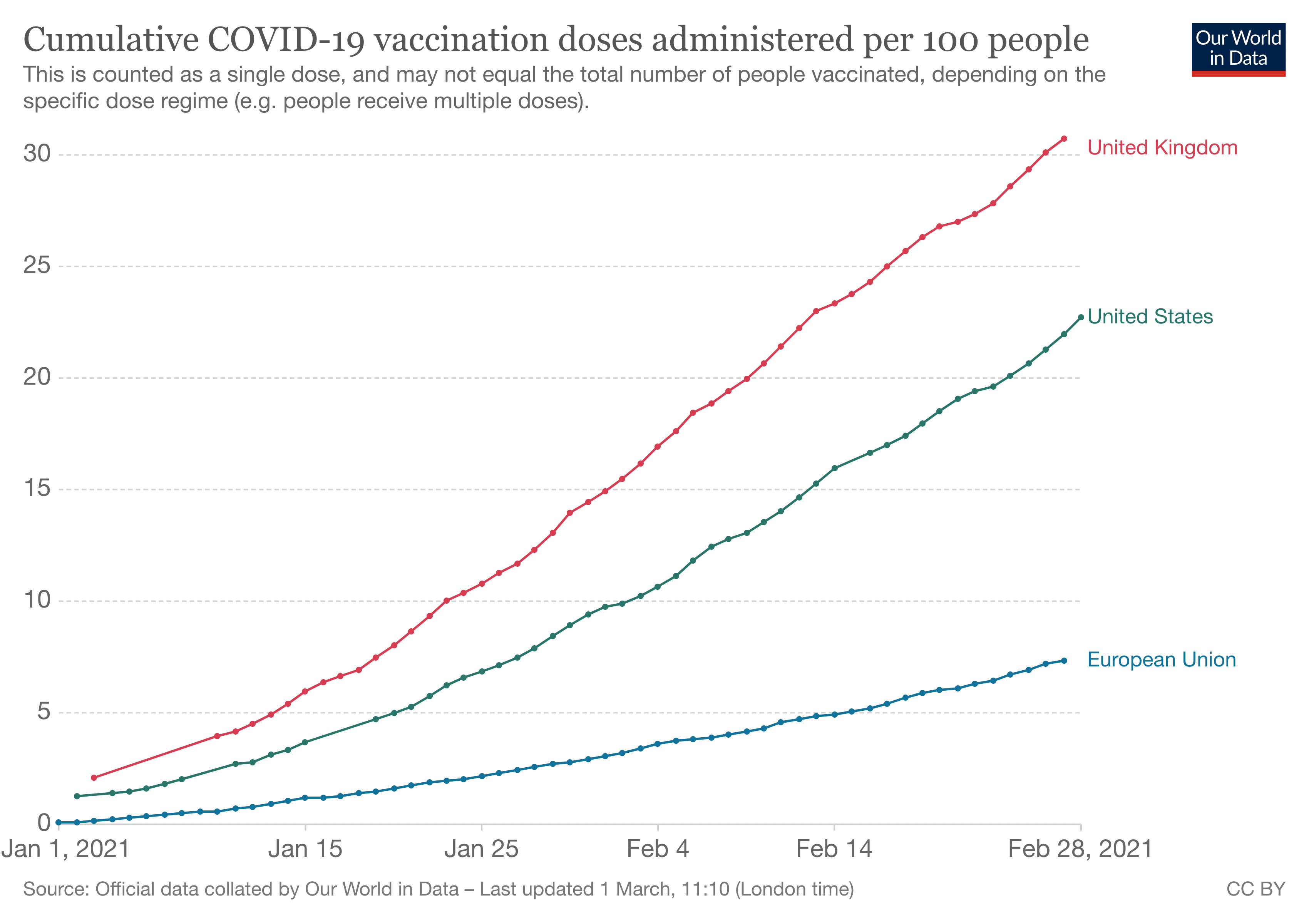 "We think most of the good news is already in the price," says Agrawal.

"Sterling’s recovery has at its heart the UK economy’s sensitivity to a successful vaccine rollout rather than the timeliness of the rollout relative to other countries," says Paul Robson, Head of G10 FX Strategy at NatWest Markets.

By contrast, the virus is spreading more strongly again in the EU, meaning a sustainable lockdown from exit is less clear, offering a potential upside boost for the Pound-to-Euro exchange rate.

In Germany, the Eurozone's largest economy, an exit from lockdown looks frustratingly difficult to achieve given the number of people infected with corona in the last seven days increased to 65.8 / 100K.

German politicians have said they will begin easing lockdown conditions should the figure fall to 35. 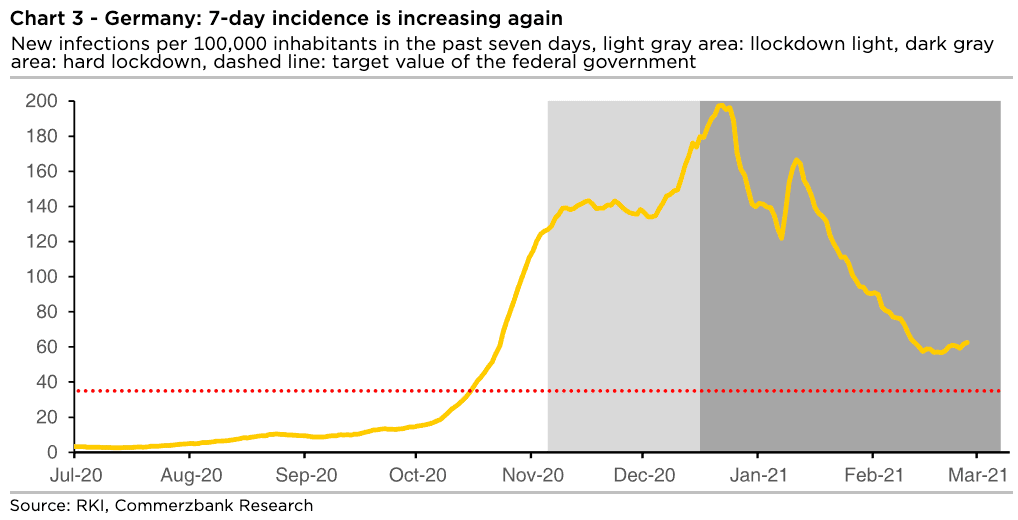 Cases in the UK are meanwhile plummeting, with 5,455 new cases of covid-19 being reported on Monday, nearly halving the 10641 cases seen last Monday. Deaths came in at 104, down sharply on the previous Monday's 178 deaths.

The data means the UK's cautious roadmap out of lockdown is not only achievable, but more importantly, it looks sustainable given a growing vaccine backstop.

The drop in UK Covid cases seems to be re-accelerating. Cases today down 49% compared to Monday last week. That overstates the trend because cases jumped briefly a week ago, but the trend is dropping by 20-30% per week, and is down 87% from the peak. Remarkable. pic.twitter.com/ziOlxo2JFu

But the progress of the pandemic in the UK has been well signposted over recent weeks, meaning it is now unclear whether this can continue to be a source of support.

Robson says additional vigilance on Sterling will now be required as the rally seen over recent weeks might be reaching its peak.

"While the government’s roadmap for easing of lockdown restrictions was on the cautious side of expectations, this doesn’t appear to have derailed the currency’s rise. But the recovery story is now far better priced," says Robson.

The same dynamics regarding Sterling and the UK's vaccine rollout could be at play, particularly given the low expectations held by markets given the UK's initial handling of the pandemic.

What will matter for Sterling going forward is how the economy responds to the loosening of restrictions, says Robson.

In particular, foreign exchange investors might be looking out for an expected summer mini-consumer boom and the ability of this boom to translate into a more enduring recovery thereafter.

"This occurred around the same time as the Oxford vaccine started to be rolled out in the UK," says Robson.

"Further GBP gains vs the EUR and USD will probably need Q3/Q4 forecasts to drift higher, particularly Q4 as this will be important in picking the timing of a BoE policy inflection point," he adds.

Meanwhile, NatWest find that the Bank of England is becoming an increasingly important factor for Sterling now that Brexit anxieties are no longer clouding the outlook.

"There has been a significant shift over recent weeks from the pricing in of negative rates in the US to discussion about when the BoE MPC could start firming up guidance on the timing of the first rate hike.

The Pound recovered from an earlier sell-off on Friday after the Bank of England's Chief Economist Andy Haldane reinforced a view that the Bank would unlikely cut interest rates in 2021 given that inflationary pressures are likely to build.

Haldane that there is risk of central bank complacency allowing the "inflation cat out of the bag".

"People are right to caution about risks of Central Banks acting too conservatively by tightening prematurely. But, for me, greater risk at present is of Central Bank complacency allowing inflationary (big) cat out of the bag," he said in an online speech for the Bank of England.

UK 10-year Gilt yields rose to their highest level since March 2020 to 0.823%, up 4 basis points on the day after Haldane's speech. A side effect of a rapidly rising bond yield, relative to others, is a bid for the currency that bond is issued in.

For now, NatWest Markets tell clients they remain constructive on the Pound and anticipate further gains against the Euro, Swiss franc and U.S. Dollar.

However, the Pound is being tipped to underperform the so-called commodity currencies, which include the likes of the New Zealand Dollar, Australian Dollar and Canadian Dollar.