Rising bond yields push up the cost of corporate finance and help explain why investors have taken a more nervous stance on equities and bought the Dollar once more, in doing so they draw questions on the consensus expectation that 2021 would be a year of Dollar decline.

The decline in equity markets seen over recent weeks still remains relatively mild when contrasted to previous episodes of market weakness when bond yields were rising: notably in 2016 following the election of Donald Trump and 2013 when the U.S. Federal Reserve prompted a bond sell-off after spooking markets by exiting their quantitative easing programme early.

The concern for investors is that a replay of 2013's taper tantrum could be about to get underway: this was a sharp selloff in bonds and financial assets in response to the Federal Reserve's decision that it would start withdrawing stimulatory support. 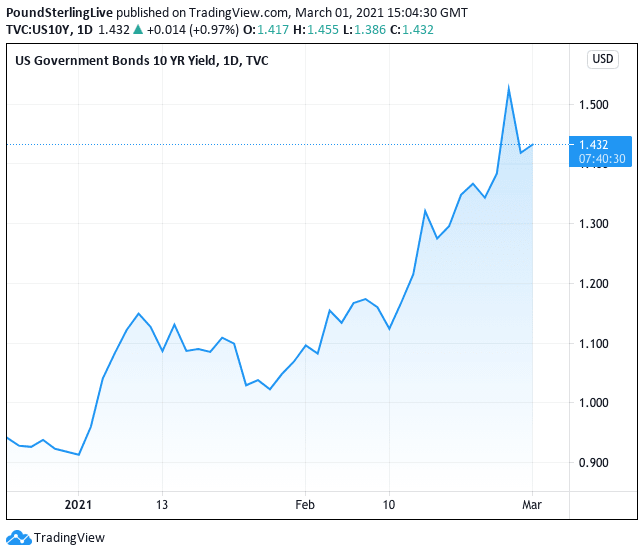 The speed, duration and nature of any bond sell-off and yield hike we see in 2021 will be important for investors: is it the more damaging 'taper tantrum' episode of 2013 or the more benign, if not healthy' 2016 version?

"Markets now trade in a regime that discounts a very benign economic outlook – i.e. they attach full credibility to US economic policy in general and to the Federal Reserve in particular. As long as this continues to be the case, financial markets should generally remain buoyant, at least over the medium term, and any drawdowns should prove temporary," says Mikio Kumada, an economist at LGT Capital Partners.

Foreign exchange analysts say further Dollar strength and and weakness in emerging market currencies as well as the Euro and Pound could ensue.

Analysts at Barclays have told clients they have raised their forecasts for U.S. ten-year yields, from 1.40% to 1.70% by year-end.

"We believe that the current rise in rates is growth-driven, resembling 2016 rather than 2013. In this light, further rates sell-off driven by better growth prospect and additional fiscal package could support USD and commodity G10 currencies, while weighing on the safe-havens such as JPY and CHF in the near term," says Juan Prada, an analyst with Barclays.

But there are risks with Prada saying if real rates continue to rise further and weigh on equities, which may already be happening, then we might need to switch the playbook from 2016 to 2013, especially for the EMFX.

"The higher rates after the 2016 US election were also driven by risk positive growth shock with expectations for Trump’s tax cuts and infrastructure investment. We also think that the Fed is at a different stage than it was in 2013, in terms of monetary policy direction," says Prada.

"Investors are increasingly confident of a ‘V’ shape global recovery, so much so that the emerging concern is not growth, but inflation," says Chris Turner, Global Head of Markets and Regional Head of Research for UK & CEE at ING Bank N.V. "Growing confidence in the global recovery, especially in the U.S., is leading to speculation over when the Fed might take its foot off the accelerator and buy fewer Treasuries and Agencies."

ING argue the Fed will have learnt from the policy mistake of 2013 which ultimately triggered the destabilising sell-off in some asset classes.

U.S. Federal Reserve's board members have of late been resolute in their stance that they are not considering withdrawing support in order to ensure markets remain orderly and financial conditions don't tighten unnecessarily. 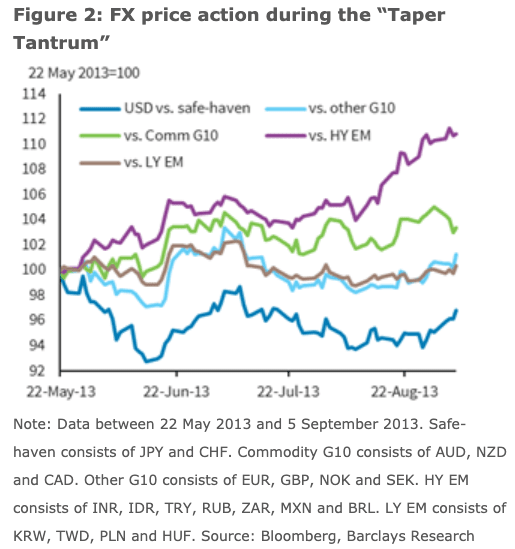 Fed Chair Jerome Powell told U.S. lawmakers last month that it could take more than three years before the Fed reached its inflation goal of 2%.

Powell emphasised on the importance of witnessing "actual progress" in the economic data, as opposed to "forecast progress" thereby hammering the point home that any change in guidance on bond purchases and interest rates would be unduly speculative.

"The Fed remains committed to its dovish policy stance, insisting that any spike in inflation from here would be transient," says Valentin Marinov, Head of G10 FX Strategy at Crédit Agricole.

But how bond yields evolve could however ultimately depend on where inflation and inflation expectations move over coming weeks and months, as a rising bond yield is a reflection of investor expectations of what compensation will be required to hold bonds in the first place.

There is a risk that inflation pushes the Fed's hand, regardless of their own intentions and supportive messaging.

ING's economists say inflation will rise sharply over coming months, but question whether this will be a temporary phenomenon or something more durable.

The consensus expectation amongst analysts that a more durable rise in inflation would likely lead to higher bond yields and a potentially higher U.S. Dollar environment.

A typical run of U.S.price increases of 0.2% Month on Month through the rest of the year takes headline inflation to 3.1% by May, placing it well above the Fed's mandated inflation target.

"With rising freight costs, fuel costs, commodity prices, and unit labour costs this could be even higher, possibly in a 3.5-4% range. The key question is how sustainable inflation will be? Ordinarily, we would look at wages as the US is a service sector and labour costs are the biggest input. But with nearly ten million fewer people in jobs than a year ago, there is unlikely to be much wage pressure in the near-term," says Turner. 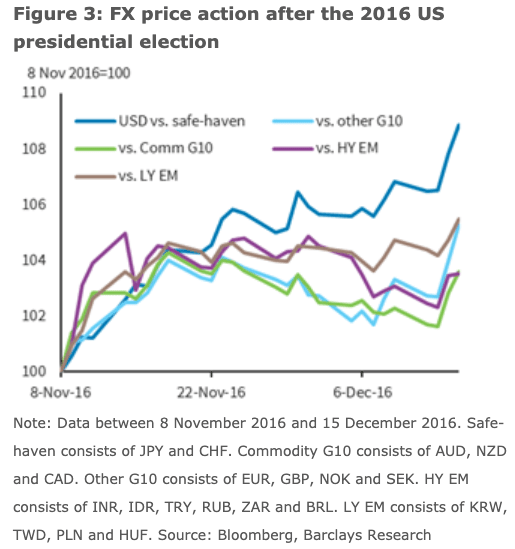 However, "vigorous demand coming up against supply constraints within many industries (bars and restaurants having gone out of business, airlines mothballing aircraft, a lack of upkeep in entertainment venues and hotels etc) could boost corporate pricing power and make inflation sticky," he adds.

Despite the Fed trying to signal it will not 'taper' its quantitative easing programme i.e. start withdrawing it, ING says the expected inflationary pressures would ultimately illicit a response.

"By the third quarter we could see real pressure on the US Federal Reserve to justify what it's doing. 3.5% inflation, booming growth and a waning pandemic would, one would think, be compatible with “substantial further progress” – progress implies a journey, rather than an end result. Consequently, we think the Fed will taper purchases in the fourth quarter," says Turner.

This suggests to ING that the June 16th FOMC meeting, where a new round of forecasts will be presented, could be the first time the Fed feels serious pressure to take its foot off the accelerator.

ING tell clients this could illicit a negative market reaction - similar to the taper tantrum of 2013 - and that it simply cannot be avoided if inflation is indeed running hot.

"Remember, if the Fed does nothing into an inflation spurt, namely not bringing forward tapering, then bonds become even less protected from inflation, as it is effectively allowed to rip higher, eroding future fixed payments in real terms even further," says Turner.

"This is an important nuance. A taper need not result in an outsized tantrum if it is seen as the Fed taking action to reduce the inflation risk," he adds.

Nevertheless, equity markets could still suffer declines. 2013's episode saw a drawdown of 7.5% in the S&P 500, "which could well be seen again," says Turner. Emerging Market equities could see a decline of 15%.

However, there is little reason to suggest that such an event will result in a major trend turn for equity markets and the Dollar.

"Summer 2013 proved barely a blip in the long-term equity bull-market and there is no reason to think that any bond tantrum-induced equity correction this summer would be more than that, just a correction," says Turner.

ING expect a benign dollar decline in 2021 as global economic growth recovers and the Fed allows the U.S. economy to run a little hotter.

Emerging market currencies would be exposed to losses, with the South African Rand being singled out as being vulnerable.

"Perhaps the most vulnerable in EM might be the ZAR, which has enjoyed strong gains in 2021," says Turner.