Meanwhile trends in short-term bond markets could mean the rally in GBP/USD extends over coming days says one analyst we follow, who argues the spread between two-year U.S. and UK bonds is the single most important driver of the exchange rate.

Powell's testimony before U.S. lawmakers on Tuesday and Wednesday was arguably the main calendar event for markets this week, resulting in a rally in stock markets and decline in the value of the U.S. Dollar as investors engaged in more risk-taking.

"Soothing Fed comments helped to lower market volatility. The U.S. Dollar was on the back foot as risk appetite improved, with sterling rising briefly to $1.42," says Hann-Ju Ho, an economist at Lloyds Bank.

Powell pushed the message that monetary policy will need to continue to support the economic recovery, especially with unemployment remaining elevated.

"That view was echoed by Fed Vice Chairman Clarida. Risk tone was also supported by positive vaccine news, including the high efficacy of the Pfizer jab in Israel," says Ho.

Powell's comments were in large unsurprising as they parroted a well-worn line designed to keep financial markets stable; in particular the Fed is keen to ensure yields on U.S. sovereign debt don't run away higher and unduly raise the cost of borrowing in the economy at a time of acute stress.

But there was a subtle shift that investors appear to have readily picked up on: "The key point was that he said it could take more than three years before the Fed reached its inflation goal of 2%," says Marshall Gittler, Head of Investment Research at BDSwiss Holding Ltd.

"The dollar is losing ground to other major currencies during early trading in the aftermath of Jerome Powell’s testimony to Congress late on Wednesday," says Ricardo Evangelista, Senior Analyst at ActivTrades.

"As things stand, dollar softness looks set to remain one of the dominant narratives in foreign exchange for the foreseeable future," he adds.

Another significant point on Powell's testimony raised by Gittler is an emphasis on the importance of witnessing "actual progress" in the economic data, as opposed to "forecast progress".

Central bank support is therefore likely to be with us for some time, particularly given that the Fed has now switched to an average inflation framework, "meaning they're planning on letting inflation run above 2% for some time," adds Gittler.

"What is driving the big rally in GBP/USD?" asks Mathew Weller, Global Head of Market Research at GAIN Capital. "While there are myriad reasons for any market movement, the single biggest factor powering the ongoing GBP/USD rally is bond yields, or specifically the difference between short-term yields on UK gilts and US treasury bills."

As the chart below shows, yields have been rising faster on 2-year UK bonds than their U.S. rivals says Weller, representing a combination of Brexit relief, vaccination distribution, and expectations for a near-term economic recovery: 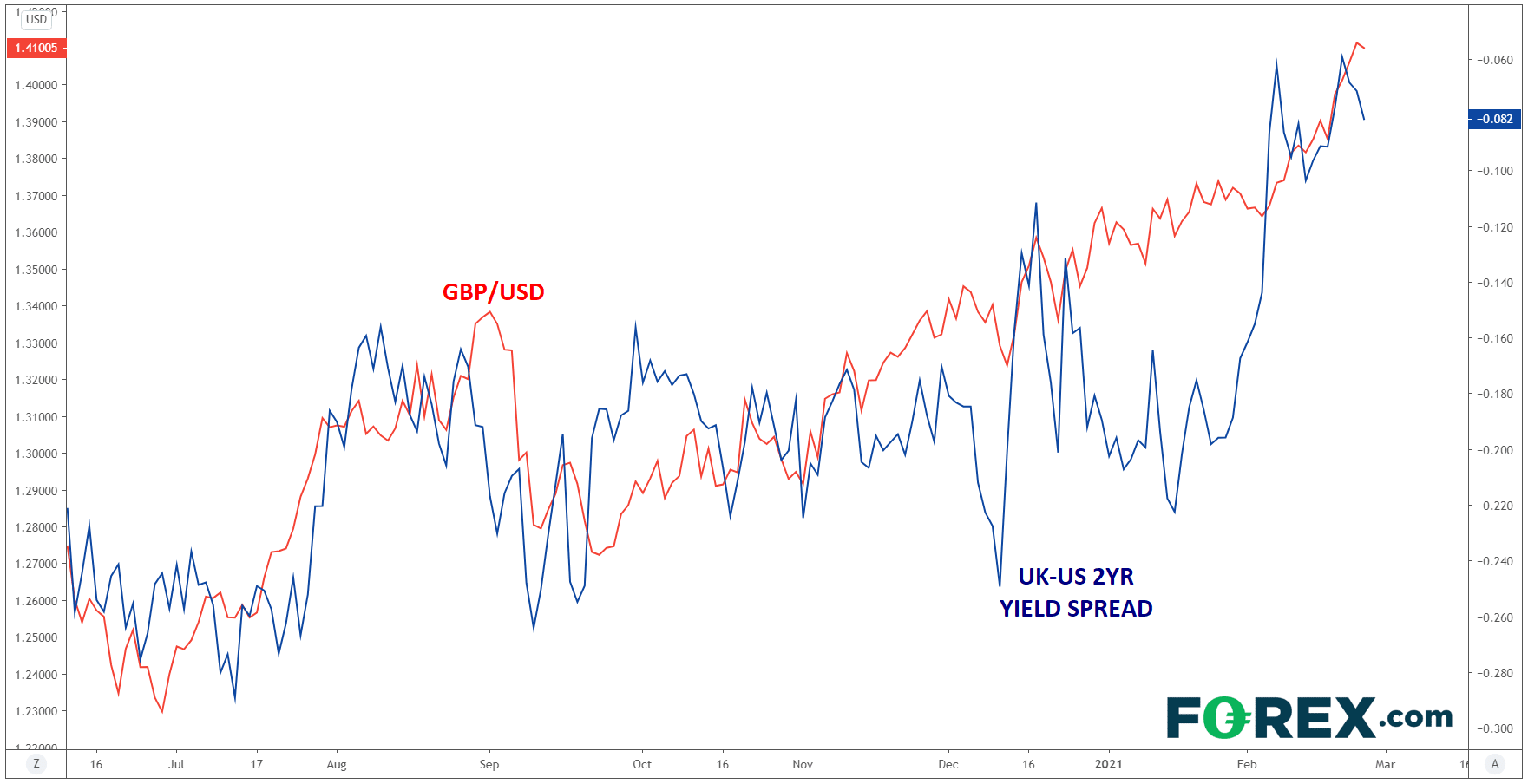 Above: The Pound-to-Dollar exchange rate and the difference in yields on two-year bonds in the UK and U.S. Source: TradingView, StoneX, reproduced here courtesy of Forex.com.

"The tightening spread between UK and US short-term bonds makes the UK (and by extension the pound sterling) more attractive to global investors," says Weller.

"If seen, this development could drive additional flows into the pound at the expense of the greenback. In other words, despite the breathtaking surge we’ve seen over the past couple months, there are still potential near-term bullish catalysts for GBP/USD," says Weller.