- GBP/USD on course to sustain 1.35-1.37 range into year-end.
- As Brexit trade deal heads for provisional application in Europe.
- With UK parliament set to provide show of support 'in principle'.
- Closing one edition of the Brexit saga, before opening another.
- Celebrations offer insulation from U.S. 'stimulus bill' uncertainty.

The Pound-to-Dollar exchange rate is on course to end the year within arm's reach of post-referendum highs as Britain's Brexit deal births a new era in UK and European relations while potentially insulating European currencies from any fallout relating to uncertainty over the U.S. 'stimulus bill.'

Prime Minister Boris Johnson and allies have been keen to stress that the 'war is over,' since declaring victory from Brussels last week following more than four-years of negotiations, the result of which has been a zero-tariff and zero-quota trade agreement accompanied by some key compromises from both sides.

Most notably for all, the agreement contains clauses for termination as well as review which enable it to be revisited in whole or in part every five years. This makes it both a platform on which Brexiteers could build, as well as a prospective chopping bloc for the whole affair. A real double-edged, democratic sword, which carves out a permanent place in British politics for Brexit matters rather than any closure of, or decisive end to the saga. Further details.

"Some further GBP gains might materialize today or during subsequent trading sessions, as some slow market participants might push GBP further. Those who have built up GBP hedges over the last 5 years might not be keen to close them within hours. But they might follow up in the next weeks (or even months)," says Ulrich Leuchtmann, head of FX strategy at Commerzbank in a Thursday commentary. "However, persistent GBP strength would be unjustified."

MPs begin voting on the agreement this Wednesday and already some of the most commited Brexit supporters have indicated or otherwise implied that they'll give their seal of approval to it, meaning the parliamentary battles that marred Theresa May's short time in office are unlikely to be repeated. Meanwhile, European leaders have given the nod to a provisional application of the pact to ensure a smooth exit from the Brexit transition period at 23:50 on Thursday.

As a result, Pound Sterling enters the new week at 1.3575 and likely well supported above 1.35. With the 1.3600 handle all but quoted, the Pound-to-Dollar exchange rate could have scope to see 1.37 ahead of the New Year, and may even be insulated from any fallout that results from a hold-up of the eagerly-anticipated fiscal relief package that finally found bipartisan support last week only to be vetoed by President Donald Trump. A short-lived U.S. government shutdown could now loom as a result. 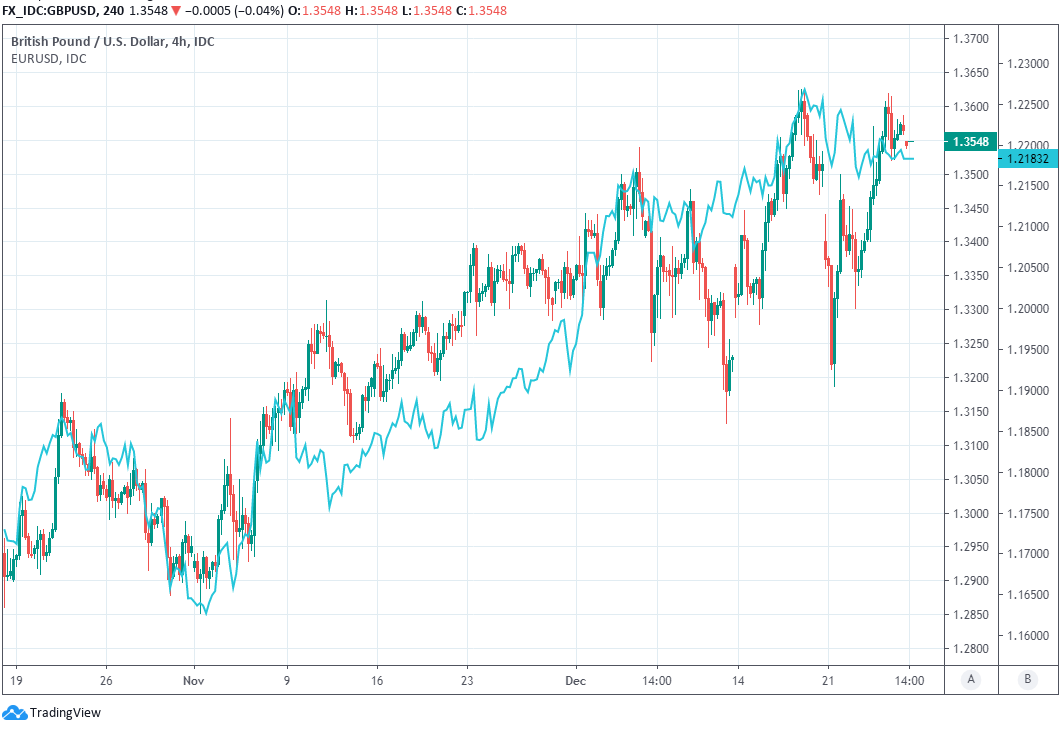 "Markets generally see this as a very watered-down version of the stimulus bill as Democrats initially wanted a USD 2-2.5trn package and even Steve Mnuchin wanted something bigger than this ahead of the election. Trump has though offered a last-minute chance of an increased wallet in the fiscal deal, calling the $600 USD direct transfer a disgrace," says Martin Enlund, chief FX strategist at Nordea Markets. "Else, all political focus is now on the Georgia re-runs on 5 January. The Republicans will not be incentivised to back anything at all after those should they keep the Senate majority alive (our base case). Should Democrats tip the majority, markets will likely chase another (larger) package."

It's not often that the Pound-to-Dollar rate has traded at 1.35 or above in the years since the referendum and on the two other occasions which it has, such levels were not available for very long at all. But this time Sterling's gains may be better sustained and a further, more protracted recovery could even lurk on the path ahead for the mid-to-later stages of 2021, subject to the evolution of the market's views on the U.S. Dollar, Euro and other currencies.

"GBP is likely to make further gains. GBP/USD is likely to push into a 1.37-1.40 range," says Tim Riddell, a London-based macro strategist at Westpac. "Potential for a more substantial move towards 1.4500 now seems unlikely given how position exhaustion is so prevalent."

Central bank concerns about currency strength are becoming more widespread and are arguably the longest-lived at the European Central Bank (ECB), which is among the most behind on its inflation target and also faces many of the more structural economic burdens within the policymaking process. While upward pressure on the Euro's trade-weighted exchange rate had eased at the time of the ECB's last meeting, Pound Sterling remains one of the few outlets for easing European exchange rate pressures. 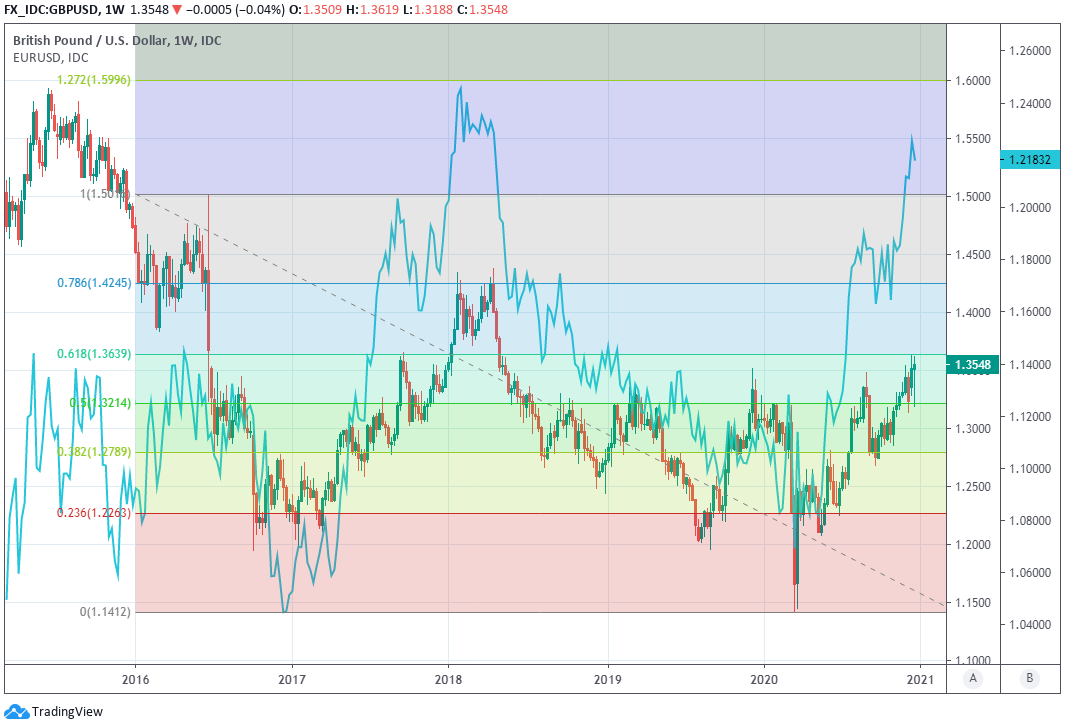 Above: GBP/USD at weekly intervals, testing the 61.8% Fibonacci retracement of its referendum fall. With EUR/USD (blue).

If GBP/USD is able to rise enough in 2021 to also lift the Pound-to-Euro rate, which is the third largest component of the trade-weighted Euro index, then the market's EUR/USD rally and broad U.S. Dollar downturn may face less pushback than otherwise from the ECB et al. But irrespective of this, the latest from the Bank of Canada, Bank of Japan and Bank of Poland to name just a few, suggests that any further declines by the Dollar may be slower in the making during 2021 than this year.

"For the first time in a decade the National Bank of Poland intervened to prevent the zloty from appreciating against the euro [in December]. On numerous previous occasions the MPC has indicated its preference for a weaker zloty to support recovery from a recession caused by the coronavirus pandemic. In our view this was a proper warning shot that the NBP is ready to act and intervene directly if the zloty appreciates too fast," says Jane Foley, a senior FX strategist at Rabobank. "Thinned activity ahead of the Christmas break and over-crowded trades likely contributed to the pullback in EUR/USD this week. In our view EUR/USD can make further headway on the upside in 2021 given that the spread in real interest rates between German and US long-term interest rates moved in favour of the EUR this year."

This year's spectacular decline has seen the U.S. Dollar go from zero to hero and back again at many central banks, although some of the world's guardians of price stability - and suitors of generally-2% inflation targets to that end - could seek to offset the impact of Federal Reserve monetary policy in what may be a so-far underappreciated theme for the year ahead. Currency wars are real and the Bank of Japan, as well as potentially others too, was already in the process of assembling a new rifle this month.

But the week ahead at least will likely be a quiet one for currencies and other financial markets, characterised again by reduced trading volumes and potentially also short-lived volatility. The week ahead is bookended by public holidays and there are no major economic numbers due from the UK, the U.S. or Europe. This leaves the few participants who may be active to respond accordingly to the ebb and flow of developments on the U.S. stimulus bill. 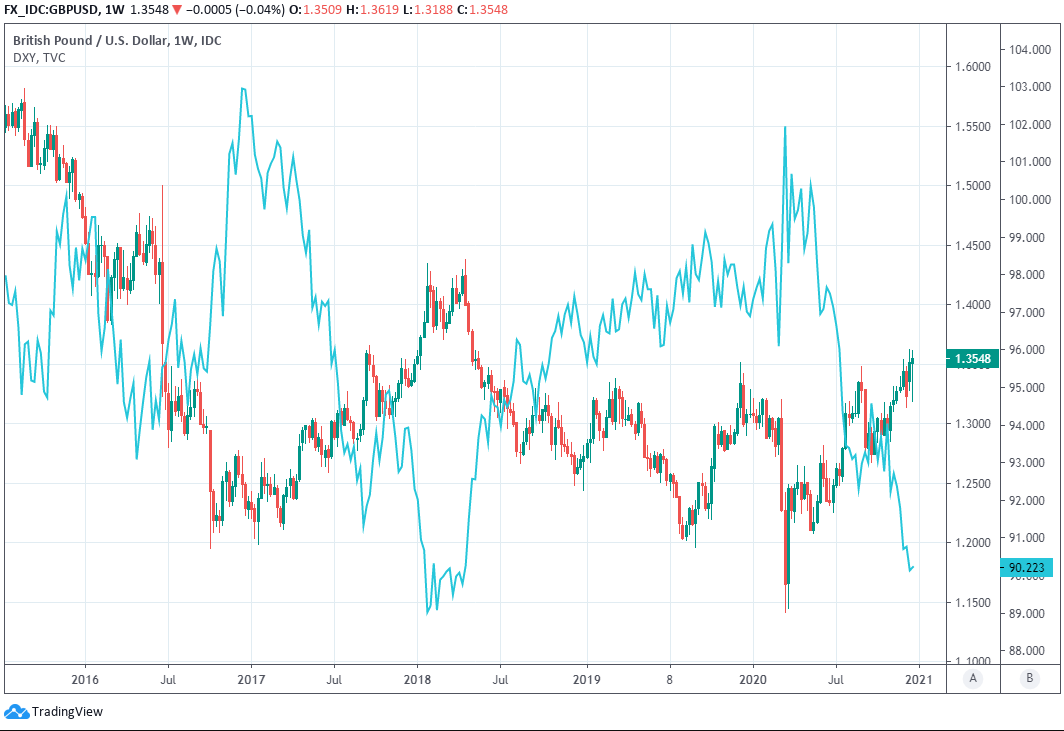