- Germany looks to shut down swathes of its economy
- France could be about to enter a 2nd nationwide shutdown
- U.S. reports rising covid-19 cases in midwest states

Europe's major economies look set to slow down drastically as government's scramble to halt a rapidly spreading covid-19, with France and Germany looking to introduce measures that will almost certainly shatter their fragile recoveries.

German Chancellor Angela Merkel says she will seek a meeting with state leaders on Wednesday to agree to close all restaurants and bars from Nov. 4 in a bid to curb coronavirus infections but keep schools and nurseries open, newspaper Bild reported.

Bilt has seen a draft resolution as showing Merkel wanted the 16 premiers of the states to agree to close fitness studios, casinos and cinemas along with theatres, opera houses and concert venues but allow shops to remain open if they implement hygiene measures and limit customer numbers.

Restaurants would only be allowed to offer customers takeaways, it said.

Germany recorded 11,409 new cases on Tuesday and Economy Minister Peter Altmaier said Germany was likely to reach 20,000 new infections a day by the end of the week. 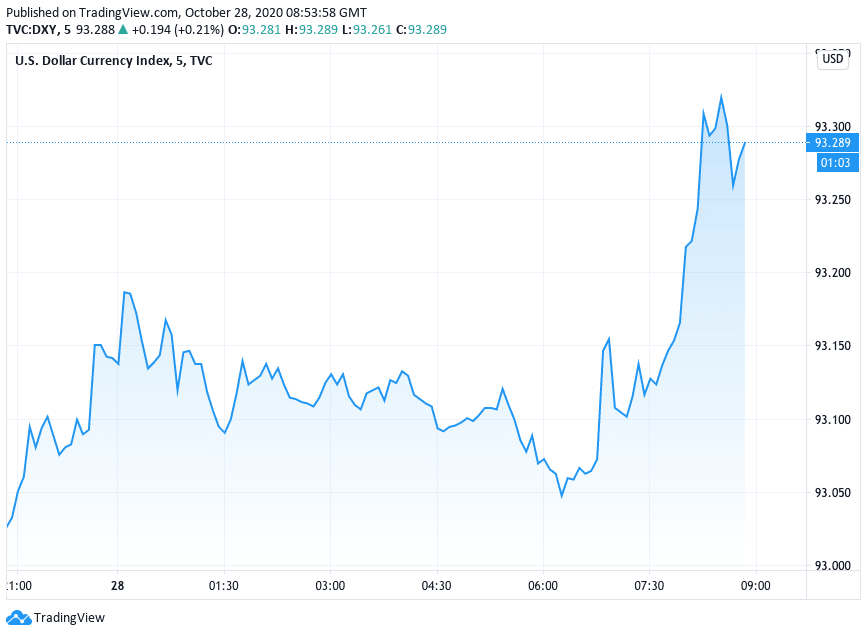 Above: The Dollar index - a valuation of broad Dollar performance based on the performance of a basket of USD-based pairs.

The Dollar rose amidst signs Europe's largest economy was looking to tighten restrictions: the Pound-to-Dollar exchange rate was softer by a third of a percent at 1.2994 while the Euro-to-Dollar exchange rate went lower by a quarter of a percent to 1.1754. If you are looking to protect your international payments budget we urge you consider the various tools that are open to you, more information can be found here.

"The US dollar rose against the euro in late Tuesday trading and has continued to move up overnight reflecting fresh lockdown concerns. Sterling has slipped more modestly against the dollar and so is up against the euro as markets wait for Brexit news," says Rhys Herbert, economist at Lloyds Bank Commercial Banking.

The demand for safe haven assets such as the Dollar comes amidst a sharp decline in European bourses, with Germany's DAX losing 3.0% and France's CAC 3.86%.

The Dollar surged to multi-month highs as stock markets slumped in the February-March period when the covid-19 crisis first swept the world's major economies, and price action in late October suggests there could be more of the same to come if the current wave of the pandemic and the response by governments continues.

"Stocks in Europe are in touching distance of the September lows as losses snowball for a third day at the start of trading this morning on reports that France could tonight announce a lockdown for up to one month. Germany is considering closing restaurants and bars for four weeks. Stocks in Europe have lost over 6% in the past two weeks as the second COVID wave rolls across the continent," says Kenneth Broux, an economist at Société Générale.

France's President Emmanuel Macron will speak in a televised address Wednesday evening to announce additional measures to tackle the virus’s resurgence, which could take effect from midnight on Thursday.

The country recorded a death toll of more than 500 on Tuesday, Macron's previous broadcasts regarding the pandemic have previously been used to announce new measures to fight the virus.

According to BFM TV, Macron's government is considering a slightly more flexible lockdown than the two-month shutdown that began in mid-March. Schools could remain open even as restrictions on people's movements become more severe.

"Across the European region, we're seeing an intense and indeed alarming increase in cases and deaths," Harris told the BBC, saying daily cases rose by a third compared with the previous week.

Italy, France, Spain have already instituted curfews in some major cities and regions in order to slow the spread of the virus, but it appears measures are thus failing to curb the spike of the disease and stricter controls are likely.

The FTSE 100 is down 2.64% amidst the prospect of a second UK national lockdown, with reports Downing Street is privately working on the assumption that the second wave of coronavirus will be more deadly than the first, with the death toll remaining high throughout the winter.

An internal analysis of the projected course of a so-called second wave of the pandemic is understood to show deaths peaking at a lower level than in the spring but remaining at that level for weeks or even months.

It is understood that the projection – provided by the Scientific Advisory Group for Emergencies (SAGE) – has led to intense lobbying from Sir Patrick Vallance and other Government advisers for Boris Johnson to take more drastic action.

Sage has warned that all of England will need to be under Tier 3 Covid-19 restrictions by mid-December scuppering Boris Johnson's hopes for a normal Christmas.

But it is not just Europe that is struggling under the burden of rising infections, the U.S. midwest is seeing a sharp rise too which should keep markets alert to the view that the U.S. is unlikely to enjoy advantage.

Nearly half a million people have contracted Covid-19 in the U.S. over the last seven days, according to a Reuters tally, as new cases and hospitalisations set records in the Midwest.

Illinois, which reported 31,000 new infections over the past week, as did Pennsylvania and Wisconsin.

Alaska set a statewide record for single-day positive tests over the weekend, and some of the hardest-hit parts of the state were rural communities with mostly Native populations.

Nationwide more than 5,600 people died from the virus nationwide in the last week, with hospitalisations rising 13%, a Reuters analysis showed.