The Pound-to-Dollar exchange rate climbed to its highest since early September Friday analysts have warned that technical resistance is set to obstruct the path higher in what could be a formative week for the UK-EU trade relationship as well as the outlook for Pound Sterling.

Pound Sterling was an underperformer on Friday though it had risen against safe-haven currencies as well as the Canadian Dollar ahead of the European close, with its strongest gains coming in relation to the U.S. Dollar.

"We are unable to rule out scope for a slightly deeper move to 1.3070," says Karen Jones, head of technical analysis for currencies, commodities and bonds at Commerzbank, who's advocated that clients sell Sterling around 1.3070. "Only above the 1.3080 level would somewhat neutralise our outlook. It guards the 1.3201 March high and the recent high at 1.3483."

The Pound-to-Dollar rate rose more than half a percent to reclaim the 1.30 handle following a rally in the Chinese Yuan, with which it shares a strong positive correlation, and amid near universal declines in U.S. exchange rates.

Investors have grown disdainful of the Dollar and developed an almost insatiable appetite for other currencies that has favoured smaller, commodity-linked Dollars this week, but also included a Pound that is as much in the grip of speculation about the latest Brexit headlines as it is those expressing bearish views on the greenback.

"The ping pong of Brexit headlines at this crucial stage makes it near untradeable. But medium term the investment case for a higher EUR/GBP is clear in our view and a deal might provide an opportunity for better levels to initiate such a trade. If next week leads to a deal, it’ll be in GBP/USD where folks will look to add to their short USD trades into the US election at least," says Jordan Rochester, a strategist at Nomura.

Above: Pound-to-Dollar rate shown at daily intervals with 55-day moving-average overhead at 1.3024.

Opinion polls shifted further in favour of Democratic Party presidential candidate Joe Biden this week, with less than a month to go before the November 03 ballot, leading to speculation about the prospect of a 'clean sweep' for the opposition party that gives them control over the Republican-held Senate.

Markets see that paving the way for a larger fiscal stimulus that might be likely under the incumbent President Donald Trump, while also sparing China and Europe from another four years of the trade tensions that characterised the first and ongoing Trump presidency.

Polls have been truly terrible predictors of voting outcomes in the United Kingdom through at least the last five years, having been at the wrong end of the field by a country mile in relation to no less than four major ballots, and similar is true of the 2016 presidential election involving the incumbent.

But for the time being, many investors are still happy to bet against the Dollar and could remain so at least up until November's election. So far this has been a boon for the Pound-to-Dollar rate.

"The resilience of the market has reduced our conviction of near-term USD strength. Equally though we believe consolidation around current levels is more likely than further USD selling from here given the uncertainty that lies ahead and given the worsening prospects for growth in Europe in particular," says Derek Halpenny, head of research, global markets EMEA and international securities at MUFG. "In these circumstances, we are becoming more cautious over upside potential for the GBP even as the EU and UK appear to be moving closer to a trade deal. The upcoming EU Leaders Summit is not expected to be game changer for the GBP, but should not be overlooked as positive or negative surprises could trigger larger than expected moves."

Above: Dollar Index shown at weekly intervals, falling below 2016 levels and toward early 2018 lows.

Sterling has also benefited from increasing caution among many who'd been betting against it after Brexit negotiators on both sides said there'd been progress in the talks and that a deal is still possible.

"Michel Barnier looks to be asking the EU to provide wiggle room on fishing which will give the UK the needed compromise to spin this as a win. If not, then the threat of the UK to walk away from talks might seem a bit more credible. Again too much ping pong, not enough progress in either direction to have high conviction," Nomura's Rochester says.

Various reports suggesting compromises could be in the pipeline have elevated the importance of next Thursday's October 15 summit, which also marks another self-imposed UK deadline for progress in the talks to be made.

Prime Minister Boris Johnson has previously set deadlines or been reported to have set deadlines in both July and September, each of which passed without either progress in the talks nor an end to them.

"We expect the deadline to be breached and negotiations to continue until end Oct / early Nov as not enough sufficient progress has been made. Still, for the UK government to justify the breach of the deadline, both sides are likely to claim that some progress has been made," says Petr Krpata, chief EMEA strategist for currencies and bonds at ING. "Such a relatively constructive message should be positive for GBP, with GBP/USD likely breaking above the 200-day Moving Average of 1.3032. Still this does not mean the end of GBP volatility and the two-way price action in weeks thereafter as negotiations will remain tough and the newsflow may turn negative again (even if temporarily and even if the deal is eventually reached)." 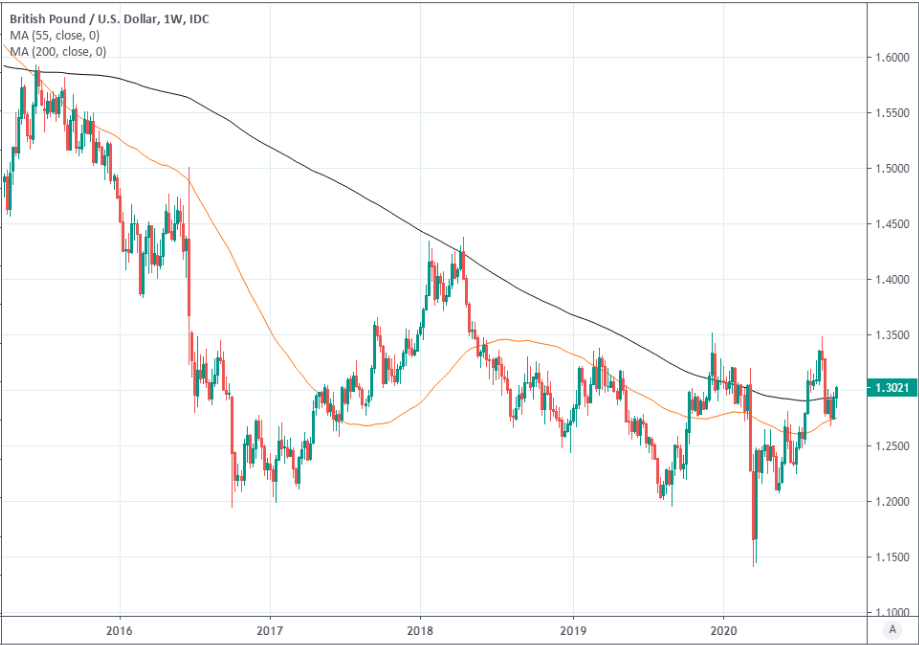 Above: GBP/USD breaks 200-week average (black), a level it's struggled to get above since 2016 and failed to hold above.

Sterling might be heartened and its recovery extended next week if negotiators are able to make sincere progress in the trade talks or succesfully feign enough of a breakthrough to justify continuing beyond Thursday's deadline.

But investors anticipate that at best only a 'bare bones' or basic free trade deal will result from the talks, which many see sapping momentum from the economy at a time when it was already slowing markedly of its own accord.

"The sobering reality is that the extent of restructuring and reordering of the British economy post-COVID-19 will be immense, so it's quite likely that there has been a permanent shift lower in the trend of services activity," says Stephen Gallo, European head of FX strategy at BMO Capital Markets. "All things considered, the current valuation of the GBP seems about right to us. While we maintain that a modest relief rally in the event of a Brexit deal covering trade in goods is a realistic expectation, we don't think the narrow value of the GBP can achieve much more than 4% appreciation on the initial response."

Concerns mounted Friday for the UK economic outlook after August GDP data forewarned of a possibly bleak winter, with the economy having struggled to grow even after substantial HM Treasury support that has since been scrapped in some case, and which is soon to be pulled in others.

GDP grew 2.1% in August, slowing from a downwardly-revised 6.4% in July while leaving economists, markets and everybody else empty handed in the face of expectations for a 4.6% gain. The next three months will be markedly different to August and the third quarter, not least of all because of fresh restrictions on activity that could become tighter still if the government perceives the coronavirus threat level to be rising.