The UK economy grew slower than expected in August even after being boosted by Chancellor Rishi Sunak’s innovative Eat Out to Help Out scheme, Office for National Statistics (ONS) data showed Friday, leading economists to warn of a bleak winter ahead in which the recovery risks going into reverse.

GDP grew by a paltry 2.1% in August, slowing from a 6.4% increase in July that was itself revised lower from the 6.6% originally declared by the ONS.

The increase left economists, markets and everybody else empty handed in the face of a consensus expectation for a 4.6% increase.

“With new restrictions being imposed to curb the resurgence in COVID-19 cases, we think that a 2.0% m/m rise in GDP in September will be followed by no increase at all in the last three months,” says Ruth Gregory at Capital Economics. "We expect the new COVID-19 restrictions to mean that the economy does little more than move sideways in the final three months of the year, leaving economic activity marooned 7.5% short of its pre-crisis level." 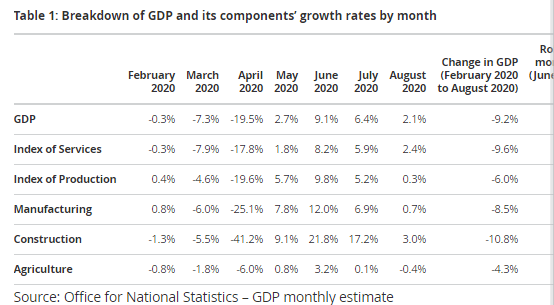 August’s expansion was the fourth consecutive monthly increase following the -20.3% fall seen in April when vast swathes of the economy were brought to a standstill by a national ‘lockdown’ that was billed at the time as a move intended to prevent the healthcare system being overloaded with coronavirus cases.

The largest contributions came from construction and services, with building firms having risen by 3% while services companies including those operating in the food and drinks trade saw output rise by 2.4%.

Within the services sector, which is far larger than the construction industry, food and drink retailers saw output rise by 71.4%, an increase that was responsible for more than half of August’s paltry increase in GDP.

“Eat Out to Help Out contributed to activity in the accommodation and food services sector rising by a whopping 71.4% m/m, accounting for 1.25ppts of the 2.1% m/m rise in GDP,” Gregory says. “Gains elsewhere were disappointing.” 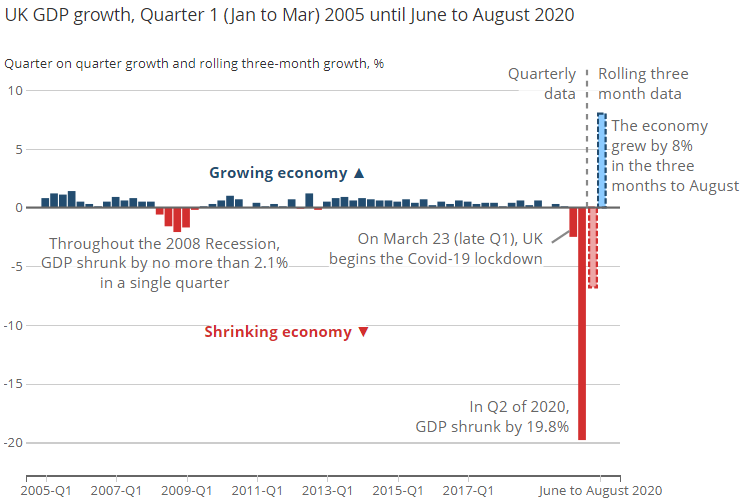 For economists, markets and the country at large Friday’s data may be disturbing and not least of all because it relates to a month in which government restrictions on daily life were at their least. It was also a period where the economy benefited from substantial HM Treasury support.

More than 100 million meals were subsidised at around 84,700 restaurants, pubs and other hospitality venues in August. This was as the government sought to encourage a return to normal life with an offer to pay half the cost of a meal up to the value of £10 each, with no limits on claims for any one person.

“GDP was still a hefty 9.2% below its pre-Covid February level in August—when no meaningful restrictions on economic activity were imposed—underlining that the recovery has not been V-shaped,” says Samnuel Tombs, chief UK economist at Pantheon Macroeconomics. “GDP also likely will struggle to improve on September’s level over the next three months, as the second wave of Covid-19 instills more consumer caution and compels the government to shut hospitality businesses in Covid-19 hotspots."

Eat Out to Help Out wasn’t enough to prevent the economy slowing sharply in August but with that ended and HM Treasury’s furlough scheme being wound down, the danger now is the wheels come off the UK economy this quarter. 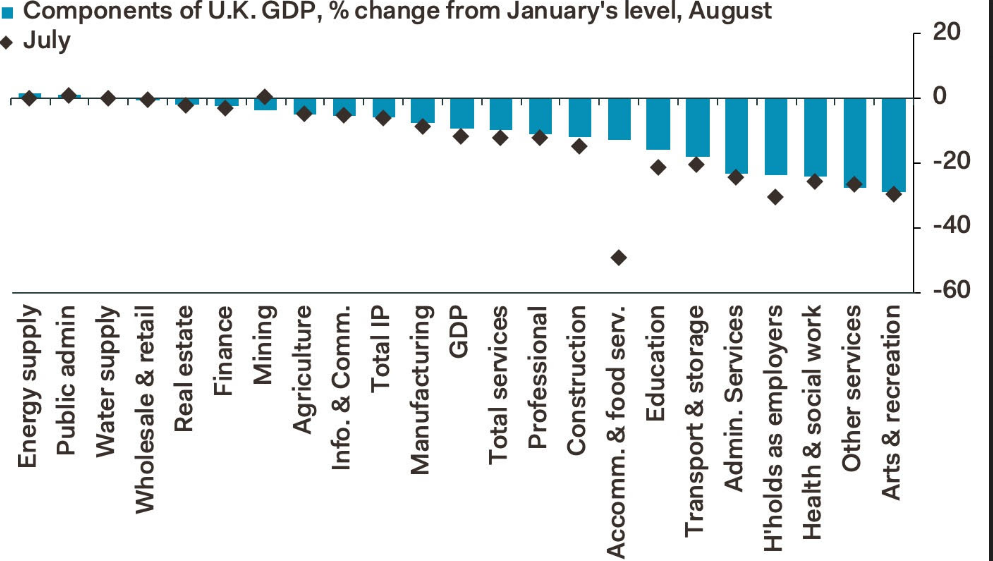 The next three months will be markedly different to August and the third quarter, not least of all because of fresh restrictions on activity that could become tighter still if the government perceives the coronavirus threat level to be rising.

Numbers of new positive test results rose rapidly through September and continued to set new highs in early October, while more than 10 million Britons have been living under varying levels of tighter restrictions for weeks.

“We're expecting another, similar-sized GDP increase in September to reflect the reopening of schools and other education settings, but reckon it is fairly likely October's GDP will go into reverse,” says James Smith, an economist at ING. “According to some very rough-and-ready calculations, we reckon that a two-week closure of hospitality at a national level could drag monthly GDP lower by around 2-3%. That could rise to 5% if shops were also closed again (something that at the moment seems unlikely). However, there's clearly a risk is that such restrictions could inevitably last longer.”

The hospitality sector that was boosted briefly in August by HM Treasury support will be first in the firing line should the government further attempt to control the numbers of test results that are positive for coronavirus.

Hospitality businesses including cafes, restaurants and pubs would likely see monthly turnover decline by -70% if instructed to close their doors for even only a two week period, research from Deutsche Bank found this week. 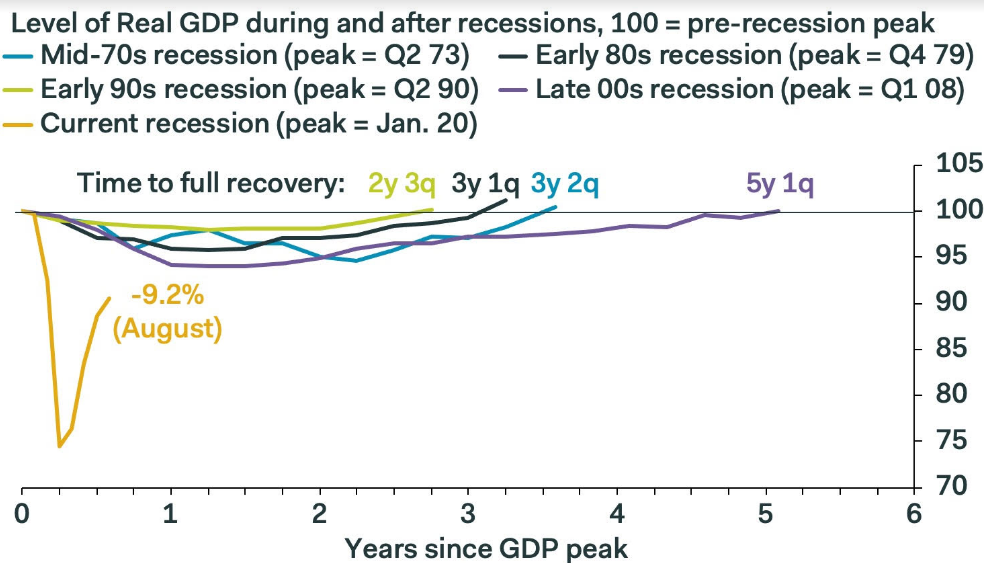