The Dollar has rebounded this week but could have the legs to recover further if a darkening mood between Brexit negotiators leads UK-EU trade talks fall apart in Autumn, given that Sterling and the Euro account for a substantial part of flows measured by the Dollar Index.

Dollars were bought widely on Tuesday as stock markets and commodity prices resumed last week's declines in earnest following the return of North American traders from the labour day public holiday that saw President Donald Trump tout the prospect of a permanent "decoupling" from relations with China.

Investors had ignored adverse news-flow relating to China for months but with the Dollar Index having fallen nearly 10% between mid-May and the beginning of September, as a possibly knife edge presidential election approaches U.S. exchange rates have benefited from profit-taking in recent days.

"Over the weekend Trump threatens domestic companies that want to do business with China, causing high betas to sell off. The US may potentially target Chinese grown cotton, so the market is susceptible to headline risk. We expect USD short covering in the short term to eventually dissipate," says Bipan Rai, North American head of FX strategy at CIBC Capital Markets.

Nowhere else has profit-taking or 'short-covering' been more apparent than in Pound Sterling or more meaningful than in the Euro-to-Dollar rate, with declines for each having contributed significantly to the 1.89% increase in the Dollar Index over the last week. 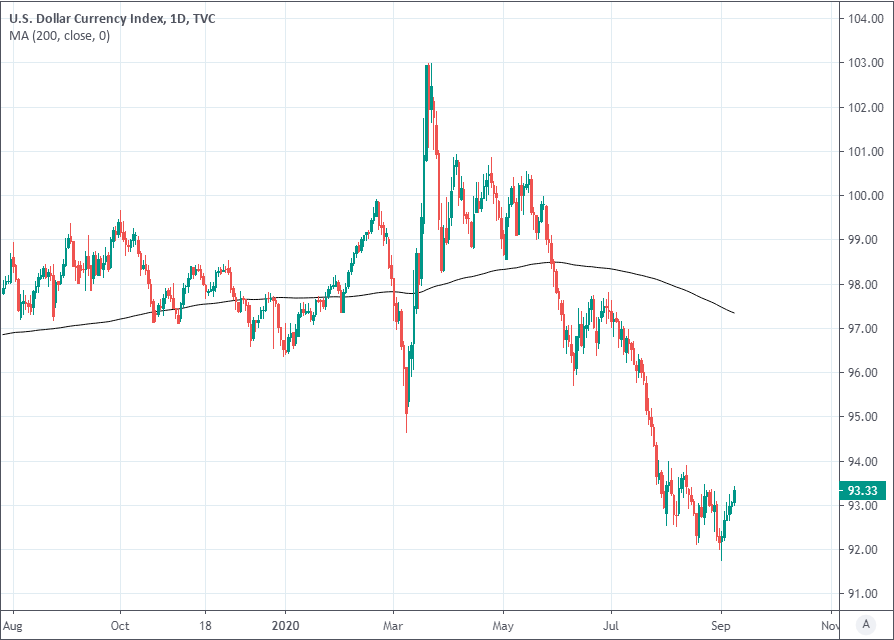 The two European currencies comprise nearly two thirds of the Dollar Index and have been undermined not only by stock market weakness, but also renewed fears about a possible 'no deal' Brexit and last week's European Central Bank (ECB) complaints about strong Euro exchange rates.

The ECB will announce its latest policy decision on Thursday and some in the market anticipate an attempt to talk the Euro into refraining from new highs, or even giving up earlier gains. The Euro-to-Dollar rate accounts for 57% of the ICE Dollar Index so a decline there would offer support to beaten and bruised barometer the U.S. currency.

"Investor positioning, declining levels of risk appetite and the forthcoming ECB rate decision on Thursday will continue to weigh on the pair in the short-term. That said, we would not expect any subsequent squeeze on USD longs to turn 'ugly' unless a breach of 1.1650 occurs on the downside," says Stephen Gallo, European head of FX strategy at BMO Capital Markets. "In the bigger picture, our bias is to 'buy dips' in EURUSD, and we'd expect to see investor demand in advance of 1.1700 (and, of course, on a close above 1.2000).

Meanwhile, the British government is attempting to impose a mid-October deadline on European negotiators for a trade deal to be reached while insisting that Brussel's drop demands for rights to British waters and 'level playing field' terms that would give the EU ongoing influence and control over numerous matters of post-Brexit domestic policy. 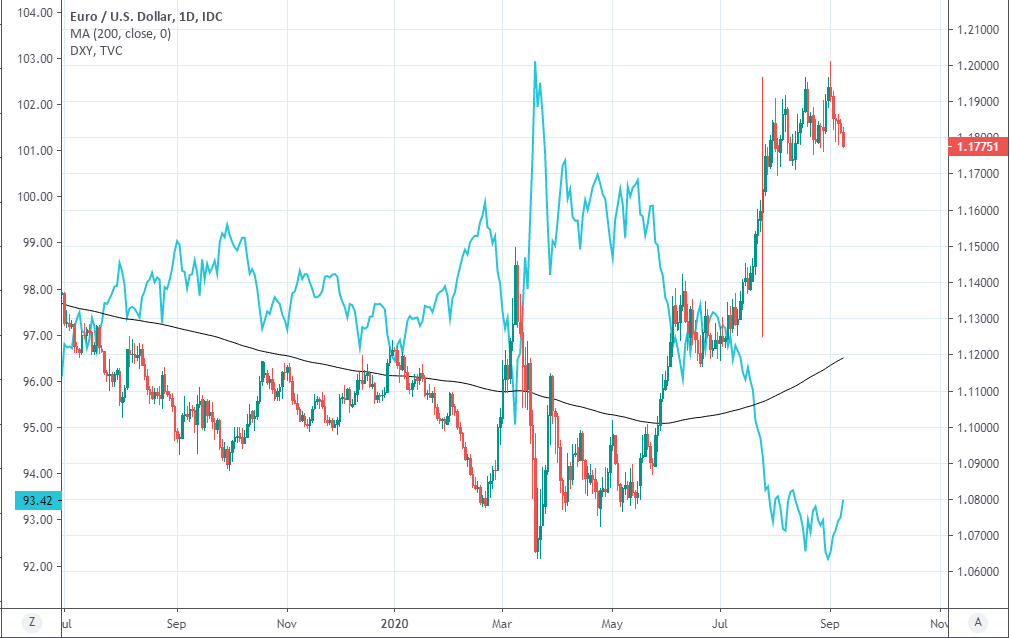 This is as Prime Minister Boris Johnson is reported to a unilateral interpretation of the EU withdrawal agreement under the guise of a 'clarification' of its terms, seemingly placing EU leaders between a rock and a hard place where they face a choice between possibly-unlikely climb down from their current stance, or forcing a 'no deal' Brexit.

"The US Dollar is upside corrective very near term, it has eroded the one month downtrend and this has introduced scope for recovery to the 55 day ma at 94.47," says Karen Jones, head of technical analysis for currencies, commodities and bonds at Commerzbank. "[GBP/USD] is eroding the 3 month uptrend at 1.3154 and the market remains under pressure. This guards the 6 month uptrend at 1.2847. Where are we wrong? The 1.3522 downtrend is considered to be a major break up point to the 1.4377 2018 high longer term."

Brexit fears could have adverse implications for the Euro-to-Dollar rate in the event they push the Pound-to-Euro exchange rate back toward its earlier lows given ECB currency concerns and the fact that such price action would provide a further lift to trade-weighted measures of the Euro.

There is scepticism in parts of the market about whether that will be the case although this didn't prevent the Pound-to-Dollar rate from falling back to 1.30 on Tuesday and once below this level there's little by way of technical support for Sterling ahead of the 1.2847 flagged by Commerzbank's Jones and the 200-day average at 1.2739. GBP/USD accounts for 11.9% of the Dollar Index.

"There is still no deal or even much evidence of good faith negotiation. It is beyond ridiculous at this point. For context: The US Constitution took 116 days to negotiate. The Treaty of Versailles took 6 months to negotiate. This would be like getting an assignment in freshman year and handing it in at the end of high school," says Brent Donnelly, an spot FX trader at HSBC. "I am not sure how excited the market will be to try the “short GBP on Brexit jitters” trade for the 73 rd time and so I would guess momentum lower will be tough to come by now." 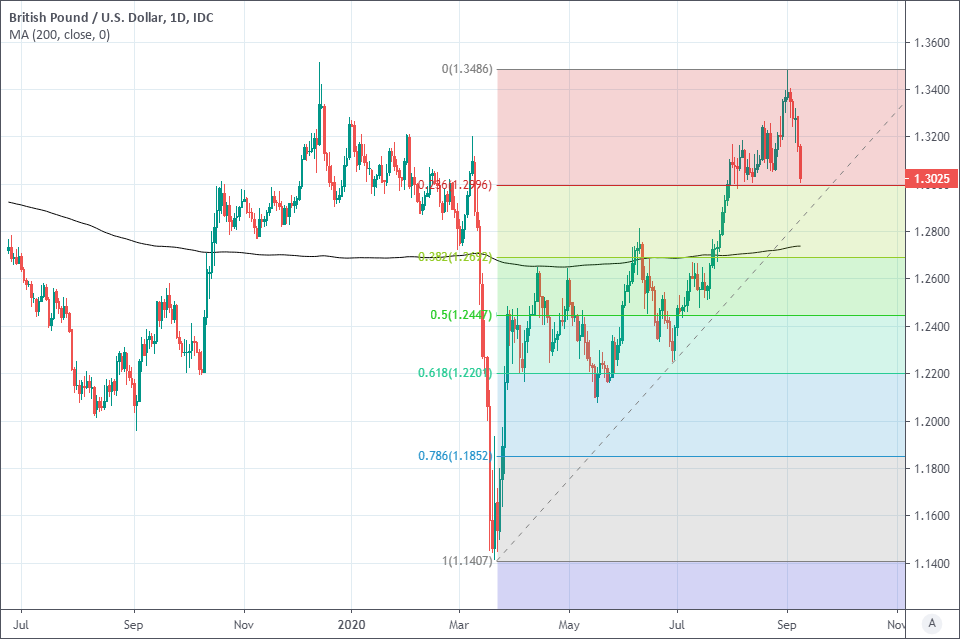 Above: GBP/USD at daily intervals with 200-day average in black and Fibonacci retracements of March recovery trend.