The Euro-to-Dollar exchange rate's 2020 rally could now be over, and an Autumn capitulation that takes it back below 1.15 can't be ruled out as Brexit trade talks raise Eurozone political uncertainty and the European Central Bank (ECB) remains concerned about the overall strength in Euro exchange rates following a multi-month rally.

Europe's single currency has enjoyed a near-12% rally from May lows at around 1.08 and investors remained upbeat on Tuesday about the outlook for it, with prices of foreign exchange forward rate agreements implying a Euro-to-Dollar rate hold around 1.19 for the next three and six months.

But those gains have helped lift the trade-weighted Euro index (TWI) to multi-year highs and drew protest last week from ECB chief economist Philip Lane, who said ahead of this Thursday's policy decision that EUR/USD "matters" because at current levels it will weigh on economic growth and inflation.

The rub for the bullish side of the market is that a Euro-to-Dollar rate of 1.18 will "matter" much more to the ECB if the Pound-to-Euro exchange rate falls through the floor in the weeks and months ahead, as it might do in response to a 'no deal' Brexit that was growing more likely this week.

Great to hear that the UK negotiating team insist on our independence, the ‘oven-ready’ deal would never have delivered that. We should ditch the Withdrawal Agreement.

"Sterling is slowly waking up to the risk of another cycle of “no deal” fears as Boris Johnson has taken a hyper-aggressive turn in drawing up possible plans to renege on the very terms that made the Brexit deal possible in the first place, and vowing that October 15 is a negotiation deadline," says John Hardy, head of FX strategy at Saxo Bank. "Sterling is beginning to absorb the implications but pricing still looks complacent here relative to the risks." 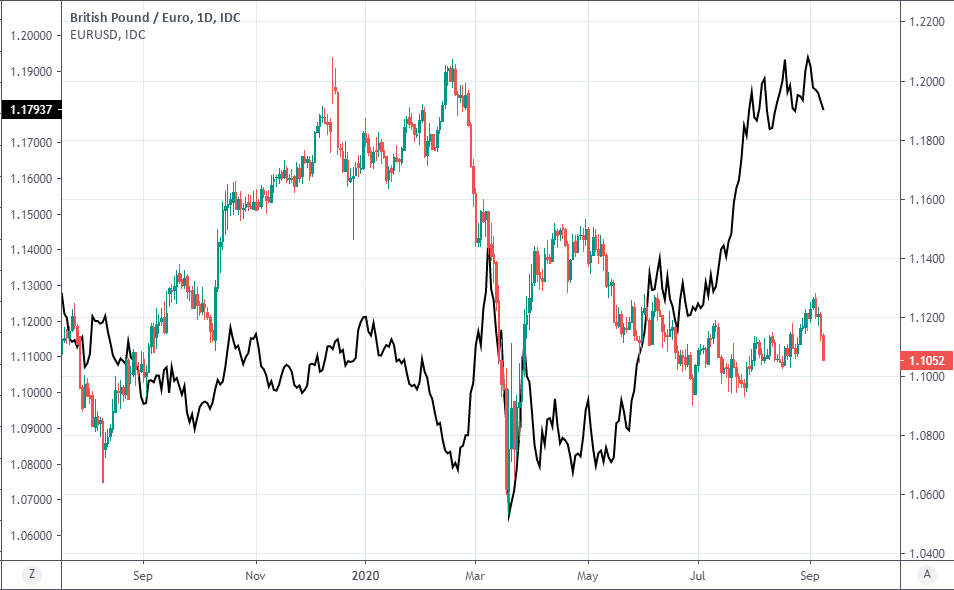 The UK government is attempting to impose a mid-October deadline on European negotiators for a trade deal to be reached while insisting that Brussel's drop its demands for continued rights of access to British waters and a so-called level playing field agreement that would give it continued influence and control over numerous policy matters.

Prime Minister Boris Johnson is also seeking to impose a unilateral interpretation of the EU withdrawal agreement under the guise of a 'clarification' of its terms, seemingly placing EU national leaders between a rock and a hard place where they must choose between an unambiguous and possibly-unlikely climb down from their current stance, or force a 'no deal' Brexit.

This is bad news for Sterling first and foremost but it also indicates trouble ahead for the Euro-to-Dollar rate because many in the market still suggest a 'no deal' exit, recently recast by the government as a so-called Australia deal Brexit, could drive the Pound-to-Euro rate to a new record low of parity.

"There’s little doubt that talks are in a precarious position. We suspect a deal is more likely than not, although the probability is now not much higher than 50:50," says Petr Krpata, chief EMEA strategist for currencies and bonds at ING. "Should there be no deal, we expect EUR/GBP to break above this year’s high of 0.95 and potentially test parity."

Krpata is looking for the Pound-to-Euro rate to fall back below 1.10 in September and says that an actual 'no deal' exit after December 31 would push Sterling below 1.0526 and potentially lead it into a test of parity. 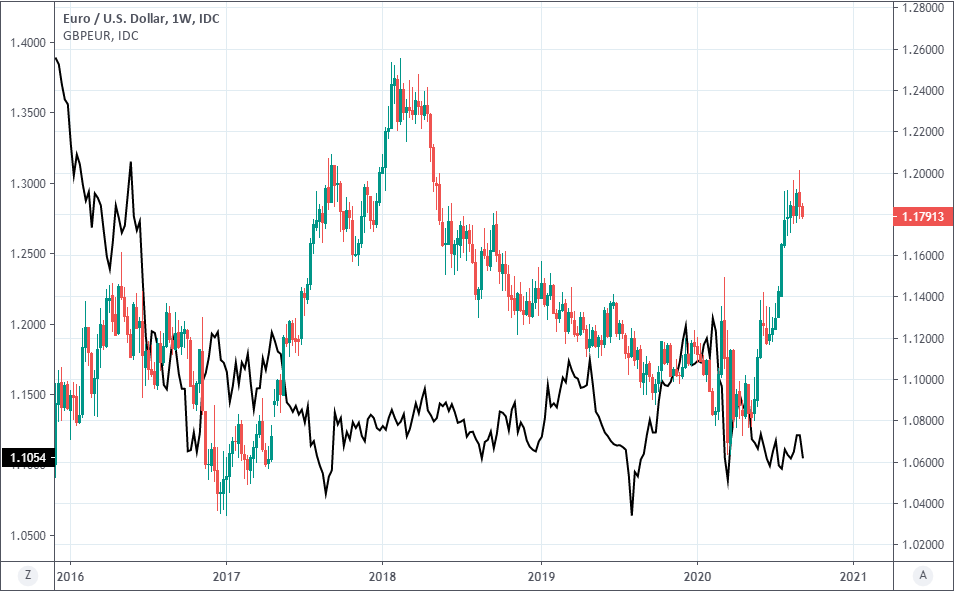 Sterling accounts for 15.16% of the Eurozone's overall trade-weighted exchange rate, ECB estimates suggest, which would rise by around 1.5% if GBP/EUR hit parity with all else being equal and by 0.9% if GBP/EUR hit 1.05.

EUR/USD could offsett those increases in the TWI but this would require up to a -450 point fall from Tuesday's 1.18 to around 1.1350. Spreading declines across EUR/USD (20% of TWI), EUR/CNH (17% of TWI) and other pairs with a lesser weighting could reduce EUR/USD's downside but 'no deal' Brexit fears and ECB concerns still probably mean the path above 1.20 has been closed for now.

"A dollar bounce is overdue. Maybe GBP/USD falling can be the catalyst for a weaker euro too," says Kit Juckes, chief FX strategist at Societe Generale. "A bad Brexit (the kind UK PM Johnson is flirting with) can get the TWI to its lows, and that means there's more than 5% downside. More importantly, at some point talk of a bad Brexit will weigh on the euro, and there are still plenty of euro longs that can get stressed."

An acrimonious Brexit is first a threat to the UK economy and currency but the Eurozone would not be left unscathed by goods tariffs and increased non-tariff barriers in services either so an appreciation of the Euro in response to such an outcome would be unjustifiable. But appreciation is exactly what the ECB and Euro TWI would get unless GBP/EUR falls are met by Euro declines elsewhere.

The fact the ECB has already complained about Euro strength and is widely expected to lean further against it in the months ahead should probably mean the Eurozone trade-weighted index becomes an important consideration for the market going forward, even without a 'no deal' Brexit being in the mix. 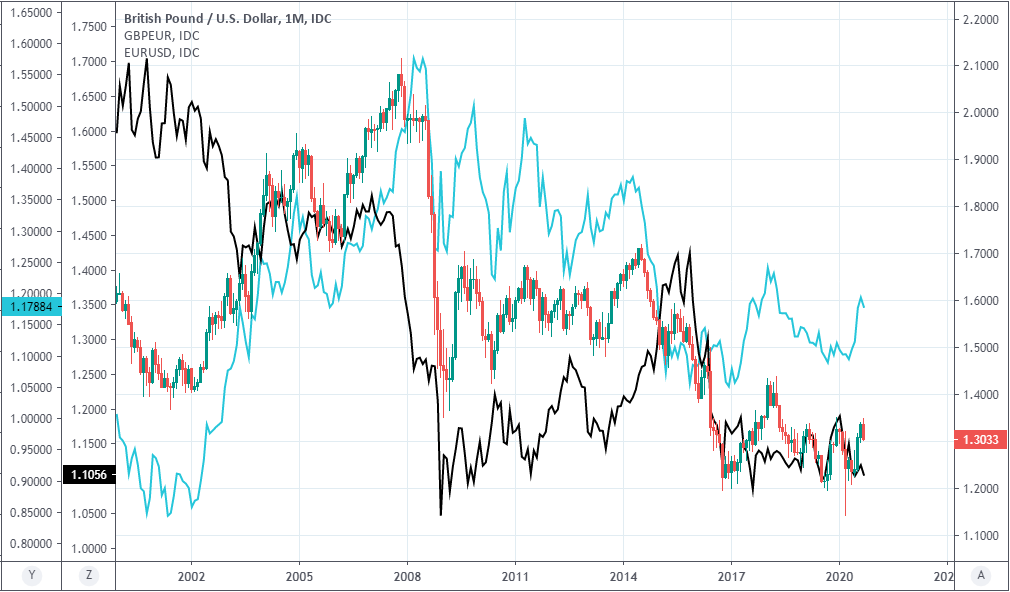 But if Sterling also needs to depreciate meaningfully against the U.S. Dollar which accounts for 18% of the UK's own trade-weighted index, then EUR/USD declines will become even more necessary because without them the upward pressure on the Euro TWI would be even more accute.

Itt was widely speculated before 2020's Dollar depreciation that a 'no deal' Brexit would drive GBP/USD to 1.15 at least, but potentially as far as 1.10, which would would force GBP/EUR to 0.9750 while delivering an even more significant uplift to the Euro TWI if not met by declines in EUR/USD or other Euro rates.

Ultimately, there's no telling how far any of these exchange rates will fall but the Brexit situation does suggest the Euro has already seen its best days for now and that some level of declines are likely, if not necessary ahead. 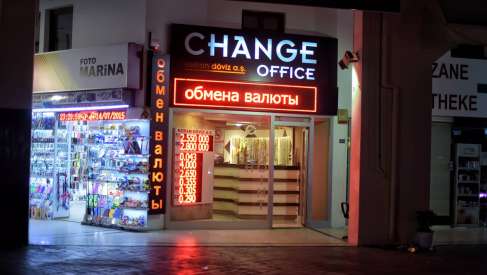