The Euro-to-Dollar exchange rate was riding high on Thursday amid price action that placed it on course for a retest of August's peak just above 1.19, although an elevated trade-weighted Euro could mean that current levels are the limit of upside for the Euro without adjustments in GBP/USD, USD/JPY and USD/CNH.

Europe's single currency advanced close to half a percent against the Dollar on Thursday in moves that may have lifted other continental currencies for mechanical reasons, leaving barely more than 70 points between EUR/USD and its two-year August top close to 1.1920.

Thursday's gain builds on a recovery from Tuesday's lows, which saw an early doors sell-off arrested just above the 1.17 handle, leaving a strong uptrend intact while encouraging perceptions of technical support in that area.

"USD is weaker this morning despite a “risk off” tone in most markets with real yields featuring once again as a possible driver," says Daragh Maher, Americas head of FX research at HSBC. "Fashionable fixation on real yields ensured this relative move pushed the USD lower. However, real 10Y yields in the US remain above those in Germany so further EUR-USD gains on this front require an additional closing of the real yield gap. Our economists do not expect the surge in July’s core CPI to be repeated and it is hard to see an idiosyncratic acceleration in US inflation relative to Europe that was not matched by a similar activity outperformance. It is questionable that the US growing more swiftly than the Eurozone would be EUR-USD positive on the basis of real yields." 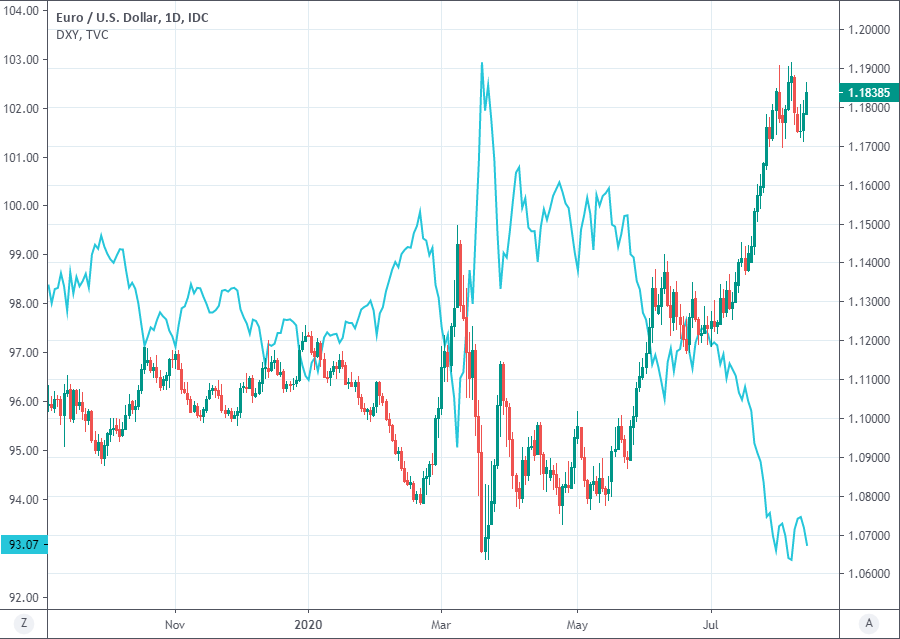 "According to our FX positioning gauge, the EUR was bought for most of the last week with speculative-oriented investors such as hedge funds being the main driver," says Manuel Oliveri, a strategist at Credit Agricole CIB.

These moves have had a substantial impact on trade-weighted measures of the single currency, which has since surpassed even the peaks seen during the rally that lifted EUR/USD from 1.06 in April 2017 to levels above 1.25 by January 2018. That rally was far larger than the recent 10 cent move.

"The FAST FX model still lost -0.19% last week being short EUR/USD and is up 12.20% over the past year with a hit rate of 64%. The model judges that EUR/USD is still overvalued and has entered another short EUR/USD position with a stop-loss of -1.71% and a take-profit level of 1.1492," says Valentin Marinov, head of FX strategy at CA CIB. "EUR/USD’s fair value is currently 1.1492, which is significantly higher than the previous week’s estimate."

Increases in trade-weighted currencies reflect more difficult operating conditions for the exporting companies, which happen to underpin large parts of some Eurozone economies, while also inciting disinflationary impulses that already bedevilled the bloc's policymakers even before the 2020 Euro rally.

"The Fed often has to choose (or flip) between being central banker to the world and central banker to the US alone. The ECB will have to choose between letting the EUR take the strain of USD weakness and not doing so," says Stephen Gallo, European head of FX strategy at BMO Capital Markets. "We'll end with a question: 'if the French franc were a live currency, where would it be trading today?...it probably would not be trading 5.0% higher YtD." 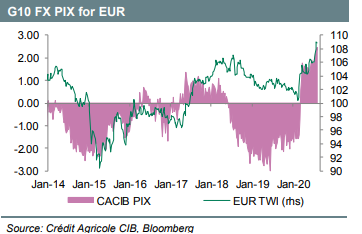 Strength in the Trade-weighted Euro might make it difficult for EUR/USD to sustain any new highs achieved over the coming days. In other words, new highs for EUR/USD could be followed quickly by corrective moves to the downside without an easing of pressure on the Eurozone trade-weighted index.

But the TWI impact of new EUR/USD highs could be countered by intervening increases in GBP/USD or falls in USD/JPY and USD/CNH. Without these, the argument in favour of a correction or some kind of policy action would solidify, and the risk of a 'squeeze' of a bullish EUR/USD market might grow larger.

"Strength in the euro has broadened notably – particularly in EURJPY, but EURUSD deserves focus on its fourth attempt today back toward the key 1.1900+ area highs. The latest currency futures positioning data shows speculative longs at a record +181k contracts, a very extended position. Sometimes, extremes in positioning coincide with extremes in price," says John Hardy, head of FX strategy at Saxo Bank. "Technically, the 1.1700 area has corralled the sell-offs effectively on two occasions and that leaves us sandwiched between 1.1900 and 1.1700 awaiting developments, with the ultimate trend test in the 1.1500 area lower if 1.1615 fails. Fundamentally, we are struggling with the immediate catalyst for further USD weakness to extend."

With the U.S. Dollar put to one side, Pound Sterling and the Chinese Yuan are by far the most significant components of the trade-weighted index for the Euro, the latest European Central Bank (ECB) estimates confirm. Pound Sterling had a 15% share of the TWI, not a million miles away from the 20% taken up by the U.S. Dollar, while China's state-managed Yuan had some 17% of the barometer.

Both have advanced on the Dollar of late but not enough to prevent losses to the Euro that lift the Euro TWI. August losses for USD/JPY, combined with a near-5% TWI weighting for Japan, could mean a higher Yen is also an effective conduit for restraining the trade-weighted currency.