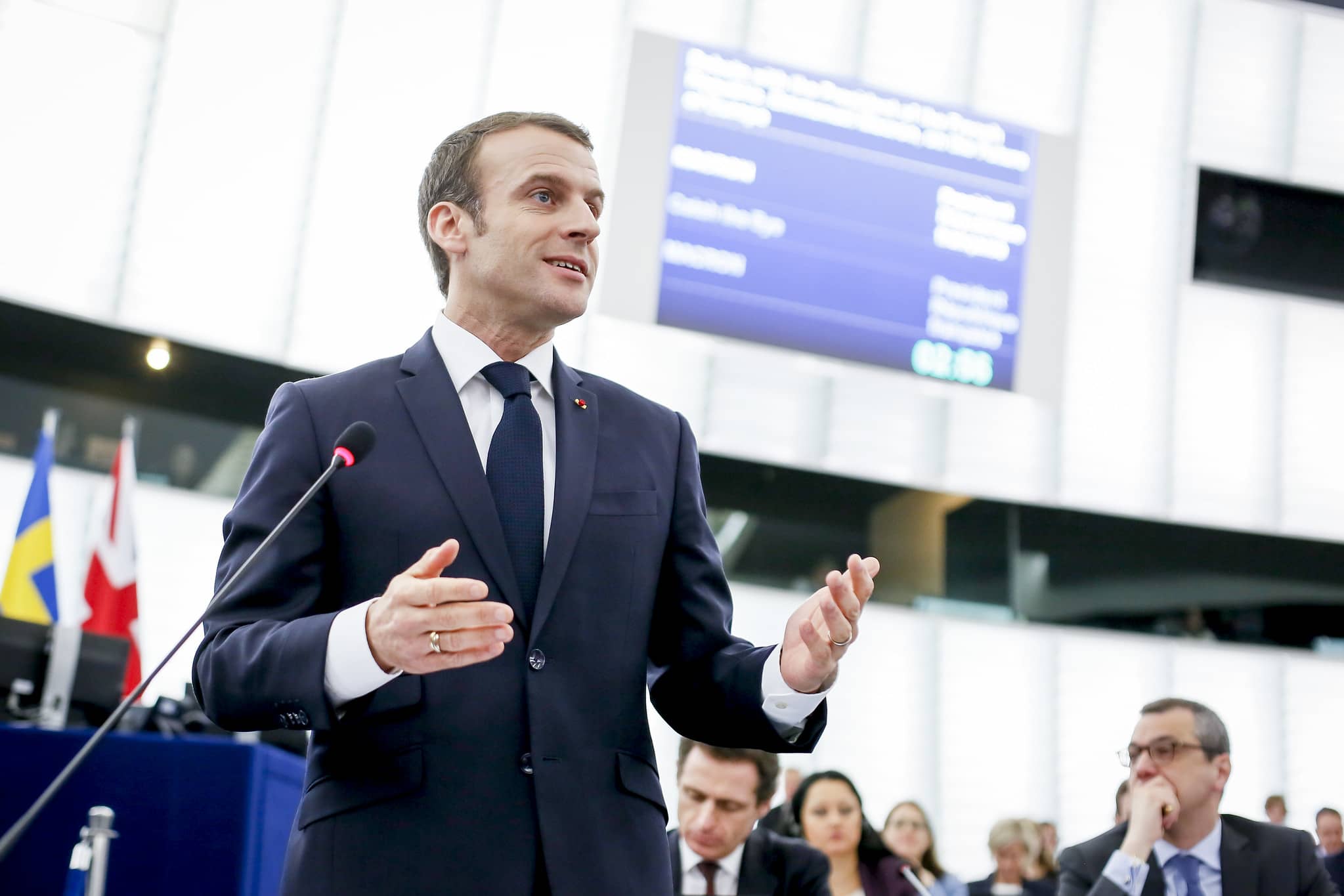 The British Pound has fallen nearly 0.75% against the U.S. Dollar and 0.5% against the Euro on Tuesday as the currency's sell-off enters a second day, ensuring the key respective levels of 1.11 and 1.31 are breached. The Pound is in fact lower against the majority of its peers, including the Australian, New Zealand and Canadian Dollars in a sign of how widespread the sell-off is.

There are two reasons behind the fall in Sterling: 1) Global stock markets are falling, confirming the Pound's positive relationship with stock markets and 2) Brexit trade negotiations are close to collapsing.

The stock market sell-off is being driven by a sizeable decline in U.S. technology stocks as air is let out of what was fast becoming an overpriced bubble. However, the consensus amongst economists and market specialists is that the global recovery should ultimately prove supportive for stocks in the long run, which should at least offer some support for Sterling over coming weeks.

"Of late, GBP also appears to be trading more in line with equities and acting as a pure risk-on/risk off currency. GBP bears may be assuming little will come from this week’s trade talks, although as ever it seems with politics and Brexit, there is an expectation that even if this week’s talks fail, there might yet be an 11th hour positive result before the 15 October deadline," says Clyde Wardle, Senior EM FX Strategist at HSBC.

The more problematic issue for Sterling's outlook is Brexit where it appears the EU and UK are at an impasse. A big concern for markets this week has been suggestions that the UK will pass legislation that effectively overrides the legislation agreed in the EU-UK Withdrawal Agreement, signed last year.

The UK says this is necessary to overcome contradictions contained in the Withdrawal Agreement, the EU says the UK is about to break an international treaty and, if this is in fact the case, there is no chance of a future trade agreement.

UK and EU negotiators are meeting for the 8th and penultimate round of Brexit trade negotiations in London today, however this negotiating round might not last the full week given the deadlock that exists between the two sides.

The deadlock has triggered the intervention of EU and UK leaders to issue various statements over the past 24 hours which has contributed to rising temperatures between the two sides, and created the political anxieties that tends to lead to weakness in the British Pound.

And further losses are expected by a number of foreign exchange analysts we follow who expect the tensions between the two sides to rise as they shore up their negotiating positions before a crunch set of senior-level talks due in mid-October.

"None of this is particularly surprising - the theatrics surrounding talks were always going to increase as the de-facto October deadline approached, and threats of ‘walking away’ were always a possibility," says Petr Krpata, Chief EMEA FX and IR Strategist at ING Bank. 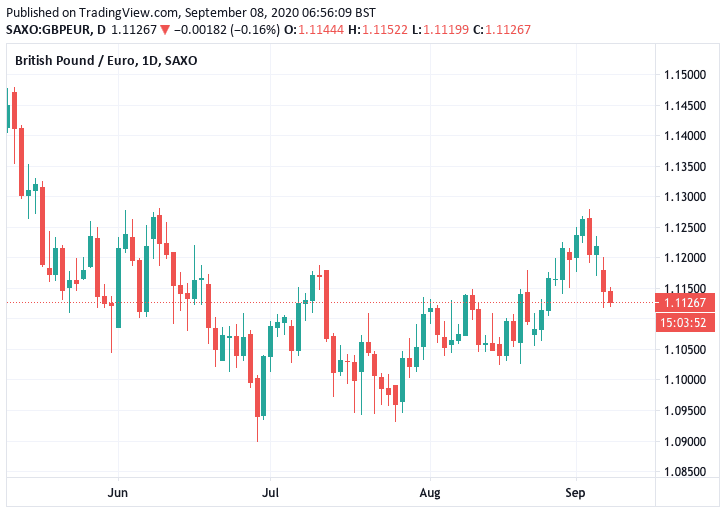 Above: GBP/EUR is falling back into its three-month range having risen through August.

The theme of a lower Pound in the face of rising Brexit-related tensions in the weeks heading into October 15 - when an EU leaders summit is scheduled - has been a theme Pound Sterling Live has been reporting on for three months now and will not come as a surprise to many regular readers.

"A lot of the chatter and commentary is very downbeat. But this should be expected - the nature of the brinkmanship means a deal always seems further away than it may be in reality. News that the UK is drawing up legislation to override the withdrawal agreement’s requirements for new Northern Ireland customs arrangements is likely to set a fire under the EU. To me this looks like the Johnson government’s brinkmanship designed to show they mean it when they say that no-deal is an option. Expect negative headlines to weigh on sterling," says Neil Wilson, Chief Market Analyst at Markets.com.

A particular focus of the rising tensions was a Financial Times article that cited three sources that said new Brexit legislation could override the Withdrawal Agreement struck between the EU and UK at the end of 2019. The bill is due for publication on Wednesday, while a Finance Bill due out later in the Autumn is reported to contain clauses that would "eliminate the legal force of parts of the withdrawal agreement".

Above: It was a sea of red for Sterling on Monday, Sept. 07

Numerous EU leaders issued statements warning the UK against pursuing such a policy, including EU Commission President Ursula von der Leyen who said: "I trust the British government to implement the Withdrawal Agreement, an obligation under international law & prerequisite for any future partnership. Protocol on Ireland/Northern Ireland is essential to protect peace and stability on the island & integrity of the single market."

The Telegraph meanwhile reports on Tuesday that Johnson will tell EU leaders the Withdrawal Agreement is "contradictory" and must be rewritten. "The Prime Minister believes the UK-EU Withdrawal Agreement is legally ambiguous and would leave Northern Ireland isolated from the rest of the UK, something that was "unforeseen" when he agreed to it last year," reports the newspaper.

"The British have laid down a 15 October hard deadline to agree a new deal with the EU; and yet this week the government is set to introduce legislation that will unilaterally break the terms of the current Withdrawal Agreement over state aid and Northern Ireland That, while calling No Deal still a “good outcome”. Hard ball it is then," says Michael Every, Global Strategist at Rabobank.

The Pound has fallen as expectations that trade negotiations will fail rise, but some analysts say the talks will likely still result in a deal as this 'hard ball' mentioned by Rabobank's Avery is to be expected and ultimately the two sides will find a compromise.

"Brexit headline risks may put a short-lived dent in GBP," says Viraj Patel, Strategist at Arkera. "Brexit headlines have been weighing on GBP ... however, this may be a bit of profit-taking given the Pound's recent rally. We see a high bar for material GBP shorts to be rebuilt on any No Deal scaremongering in negotiations (as we've been here plenty of times before). Like the 'boy who cried wolf' – investors may only believe it when the wolf actually shows up."

Indeed, the Pound rallied through the summer months despite regular headlines that the EU and UK's negotiating teams were struggling to reach the necessary compromises to strike a deal and for now the GBP/EUR remains above the fulcrum of 1.11 and the GBP/USD remains above the psychologically significant 1.31 region.

Prime Minister Boris Johnson spoke with his French counterpart Emmanuel Macron on Monday, amidst the negative Brexit headlines, and the official takeaway from the talks was that they were cordial and that both sides remain committed to a Brexit deal.

A newswire report read, "UK PM Johnson and French President Macron agreed on importance of making progress this month and reaching a conclusion on talks quickly.

Macron tweeted: "Very good exchange with Boris Johnson. We will strengthen our cooperation against migrant smugglers. We discussed the follow-up to the poisoning of Alexei Navalny, the situation in Lebanon and the future relationship between the European Union and the United Kingdom."

The two sides remain engaged and while the negotiating teams have hit deadlock the market is likely to maintain a focus on the mid-October EU summit which has been established as a deadline by both sides for any real gauge as to whether or not the EU and UK will reach a deal or not.

"Sterling has started to feel the heat of Brexit uncertainty yet again. After a calm summer, which was scant on material Brexit-related news, and general US dollar weakness, which helped all G10 currencies, including the pound, the uncertainty is back following reports that Prime Minister Boris Johnson is ready to walk away from a deal and introduce the internal market bill to override the withdrawal agreement (see the box below for details). GBP, in our view, is unprepared," says Krpata.

ING forecast the Pound-Euro exchange rate to hit 1.0989 in September, while GBP/USD is forecast to go below 1.31 this month.

"The lack of risk premia priced into sterling suggests further downside to the currency in coming weeks, particularly if little progress is made ahead of the 15 October deadline (now seemingly self-imposed by Johnson)," says Krpata.

"It all looks quite binary between deal or no deal, but the risks remain skewed to the downside in our view for reasons more than Brexit. Furlough ending in October, tax rises on the agenda in the Autumn budget and the UK still suffering from low levels of economic mobility. We remain long EUR/GBP looking for 0.92 into the EU summit in October," says Jordan Rochester, a strategist at Nomura.

"If the no-deal rhetoric ramps up, then history would suggest the pound will fall sharply. GBP/USD could slip back into the lower realms of the $1.20s and GBP/EUR under €1.10. Brexit will dominate sterling’s trading bias this week, but general COVID developments and UK GDP data on Friday may also play a part in GBP price action," says George Vessey, UK Currency Strategist at Western Union.