The Pound-to-Dollar exchange rate has been humbled by a steadying greenback that could keep Sterling on the back foot this week as the Brexit negotiations resume and the market remains cautious ahead of an increasingly important policy update from the European Central Bank (ECB).

Sterling starts the new week softer against the Dollar, ensuring a near-term trend that began at the start of September rolls into another week. Sterling was last week sold and Dollars were bought as some of the major currency trends of recent months faltered, pulling the Pound-to-Dollar rate down -1.5% from near 1.35 before leaving it with a -0.59% loss for the week.

"The reversal from the 1.3500-1.3550 resistance, along with our cycle analysis, suggests a broader correction back to test the 1.30 support region should be seen. Resistance today lies in the 1.3280-1.3320 region, while under that we look for a break of 1.3170 to open the next phase lower," says Robin Wilkin, Cross Asset Strategist at Lloyds Bank.

Wednesday remarks from the Bank of England (BoE), Euro losses resulting from an ECB complaint about currency strength and declines for stock markets all contributed to the turn lower in the Pound-to-Dollar rate.

"This market selloff still looks like it is in need of an actual reason, apart from the evidently sensible one that what goes up must come down, and that the ‘long tech and growth’ trade had simply grown too crowded, particularly on the options side ," says Chris Beuchamp, chief market analyst at IG. "It will probably take a few more days for the dust to settle – European markets are therefore at the mercy of further downside on Monday when the US is taking a day off."

Stocks came under pressure last week amid what some analysts say was a rotation out of technology shares and into more cyclical companies, which lifted the Dollar from near two-year lows including after August's non-farm payrolls report.

It's not clear what caused the rotation or whether it'll continue in the new week, which is marked at the beginning by a U.S. public holiday, although stock market losses predated Friday's sharp fall in the U.S. unemployment rate.

"GBP/USD has failed just ahead of the 1.3500/15 resistance. This is the December 2019 high and the January 2009 low. Here we also find the 1.3522 2009-2020 resistance line (see the monthly chart). We would allow for further near term weakness towards the March peak at 1.3201," says Karen Jones, head of technical analysis for currencies, commodities and bonds at Commerzbank, who's suggested that clients sell Sterling at 1.3475.

(If you would like to secure today's rate for a transfer due in coming weeks, please learn more here. Alternatively you can set an order to automatically fill if your ideal rate, or absolute minimum rate, is reached). 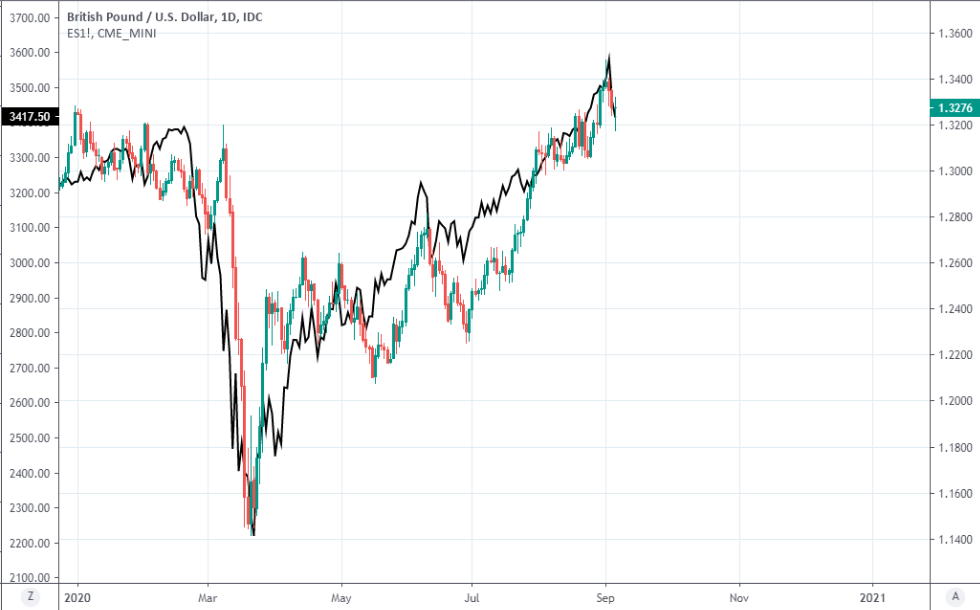 The next round of Brexit talks begins Tuesday and may not help sentiment toward Sterling given rhetoric of British negotiators this weekend.

"The October deadline for trade negotiations looks likely to be breached and with no imminent breakthrough in negotiations the negative headline news is likely to increase. Coupled with the near-term limited upside to EUR/USD (following the comments from ECB officials and the likely more easing from ECB ahead), the recent GBP/USD rise should stall, with the pair unlikely to breach the 1.3500 level again any time soon," says Petr Krpata, chief EMEA strategist for currencies and bonds at ING. "We note the importance of EUR/USD for GBP/USD price action, with the former explaining almost 100% of the move of the latter over the past three months."

Sterling has taken little notice of the talks recently but some analysts expect this to change given it's still possible for a 'no deal' Brexit to happen at year-end while both sides have only until mid-October to reach an agreement.

"We would not expect markets to ignore Brexit risks and timelines indefinitely. Tight timelines, driving political pragmatism, leave us favouring a deal. Yet risks of an unintended breakdown in talks are increasingly tangible," says Jeremy Stretch, European head of FX strategy at CIBC Capital Markets. "Recent GBPUSD impetus, even against a structurally weak USD, look susceptible to a politically inspired correction back towards 1.30."

Stock markets will also be watched closely early this week with any ongoing softness likely to weigh on GBP/USD and lift the Dollar against other currencies, although price action in EUR/USD will also be important ahead of UK GDP data and U.S. inflation figures on Friday.

"We have been citing the near-term risks of a dollar correction stronger for a number of weeks now and this looks to be under way now after the failure of EUR/USD to sustain levels above 1.2000 on Tuesday," says Derek Halpenny, head of research, global markets EMEA and international securities at MUFG. 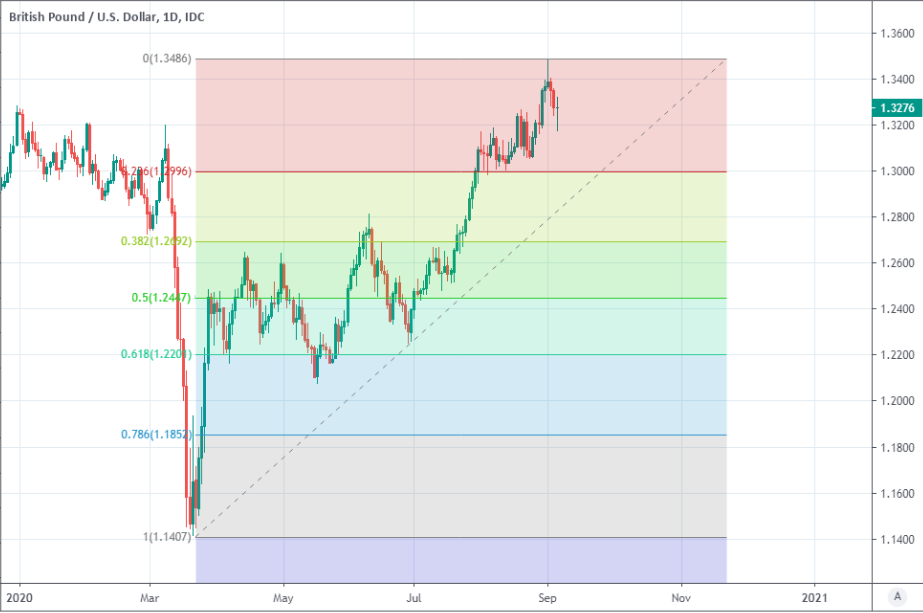 Above: Pound-to-Dollar rate shown at daily intervals with Fibonacci retracements of March recovery.

"The correction in US equity markets fuelled by big tech selling creates greater two-way risk over the short-term that may encourage further liquidation of long equity positions," Halpenny says. "The week ahead will be dominated by the ECB...EUR/USD will remain under selling pressure."

EUR/USD price action will be an important influence all week after the single currency was turned away from 1.20 by ECB policymakers concerned about what a rising exchange rate might mean for the Eurozone economy and its inflation target further down the line.

This is a problem because GBP/USD tends to follow EUR/USD, which might be likely to remain on its back foot ahead of Thursday's announcement.

"Cable, in other words, appears to have peaked more or less where it did in late 2019 before the plunge to 1.14. The GBP’s grind higher from that low point has been slow but fairly consistent since the spring but corrective forces appear to be building. We see support at 1.3265, the midAugust highs, but weakness below here would imply the GBP slide could extend to test key support at 1.3005," says Juan Manuel Herrera, a strategist at Scotiabank. "We think there are growing risks that the EUR setback may be more significant. The EUR rally has stalled around the psychological 1.20 level and, after an extended run higher, a correction of some substance ought not to surprise."

The ECB will address a near 12% increase in EUR/USD since mid-May and mid-single digit gain the trade-weighted currency at 12:45 Thursday and in a 13:30 press conference. The market's focus will then turn to UK GDP data at 07:00 Friday and U.S. inflation figures due out at 13:30. Consensus looks for the UK economy to have rebounded by 6.6% in July, down from 8.7% previously.

"CPI figures should move the market far less than before, now that the Fed is prepared to run the economy hot," says ING's Krpata. "Given broad momentum behind dollar weakness we think the ECB can only slow, not reverse EUR/USD appreciation. We therefore look for some consolidation ahead of Thursday’s ECB meeting, but expect investors to buy the dip." 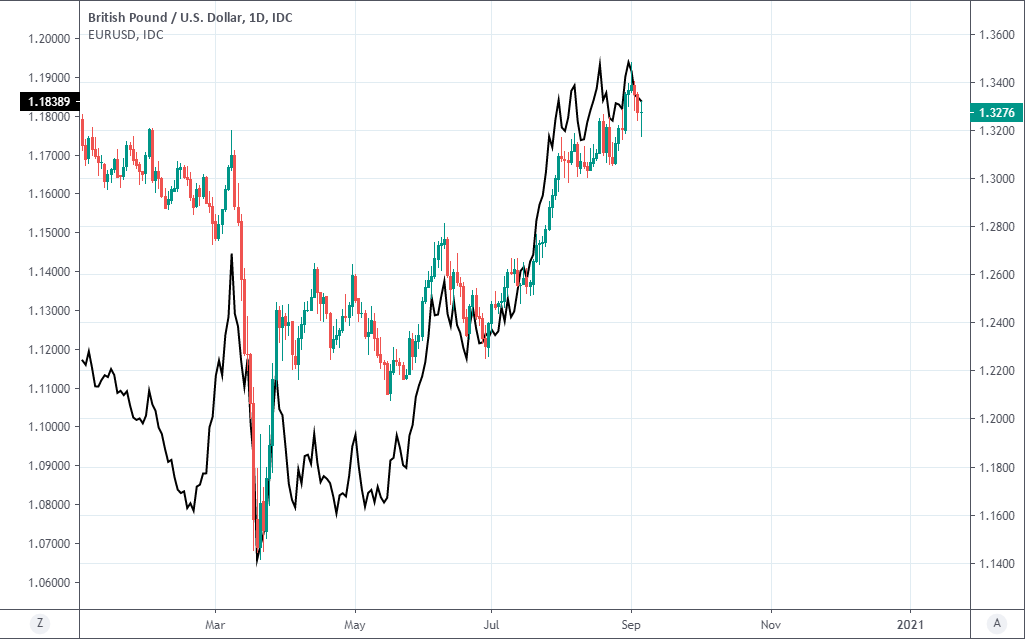