- GBP/USD risks correction after best month since May 2009.
- Best week since March, virus trends argue for consolidation.
- Faces resistance at 1.32, supported between 1.25 and 1.28.

The Pound-to-Dollar rate advanced 2.27% by the time all was said and done, the strongest performance of any major currency and of an order not seen by Sterling since March, which confirmed its best month since May 2009.

"Broad-based USD weakness has helped to lift cable by almost 6% in July," says Lee Hardman, a currency analyst at MUFG. "In the process, the GBP has become heavily overbought against the USD suggesting caution in continuing to chase cable higher in the near-term. However, the GBP’s recent performance on a trade-weighted basis has been less impressive as it remains around -1.7% lower than in late April. EUR/GBP has held above 0.9000 for the longest period since the summer of 2019."

The relative-strength-index (RSI) measure of momentum has now reached levels that typically indicate a fading rally. This might mean that the best the British currency can hope for in the coming days is a period of consolidation that leaves nearby support levels intact and the uptrend alive and well. 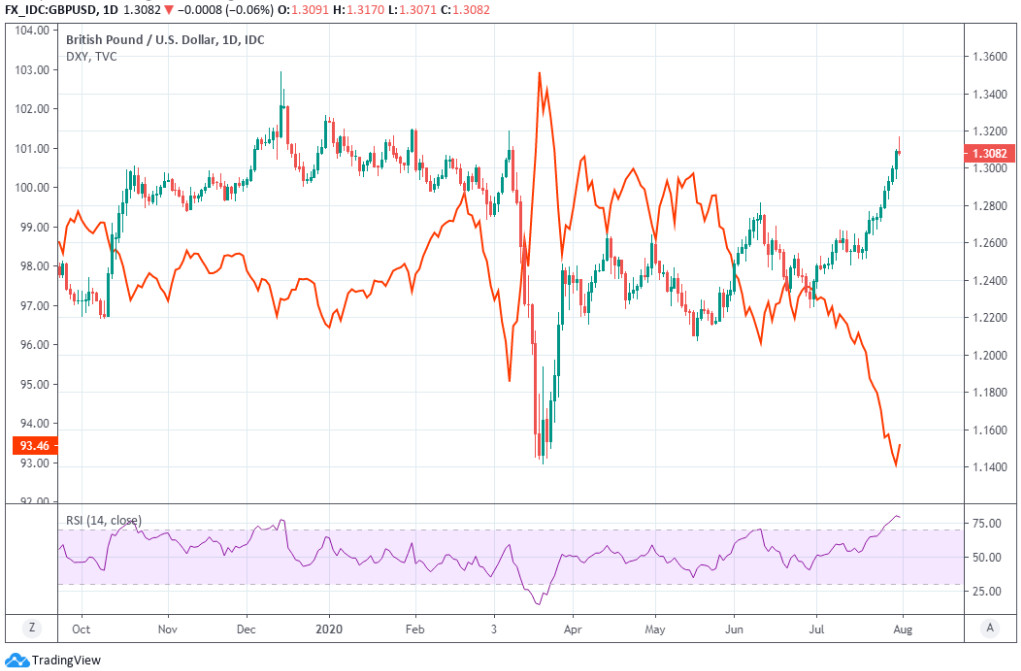 "GBP/USD has maintained upside pressure and is poised to reach the 1.3175 the 2015-2020 downtrend. The 1.3201 March 2020 high lies just above here and we would allow for this to hold the initial test. Dips lower are expected to find initial support at the 1.2814 June high ahead of 200 day ma at 1.2701 and remain contained by the 1.2529 support line," says Karen Jones, head of technical analysis for currencies, commodities and bonds at Commerzbank.

Much about the outlook depends on whether investors remain willing to express their contempt for the greenback, which has fallen to its lowest levels since early 2018 when measured by the Dollar Index, a move that's coincided with another sharp rally in the Euro-to-Dollar rate. With the election still months out and the greenback still in the top end of its range for the last decade even after the recent sell-off, investors might not be quite done with the Dollar.

Given the scale and speed of the move as well as a nascent turning in the transatlantic coronavirus tables, a period of consolidation or even correction may be looming over the Pound-to-Dollar rate and EUR/USD. Commerzbank's Jones looks for Sterling to find support between 1.25 and 1.28 while Scotiabank's Herrera

"The rest of G10 isn't much of a story except for GBP, helped by bears/shorts taking beating as GBP/USD stops are triggered," says Kit Juckes, chief FX strategist at Societe Generale. "The UK saw a pick-up CBI reported sales, and in mortgage approvals, as well as a rise in house prices (if you believe the data). There was also renewed lockdown in the North West of the country and concern about rising Covid-19 infection rates. Nothing to justify the GBP move though!" 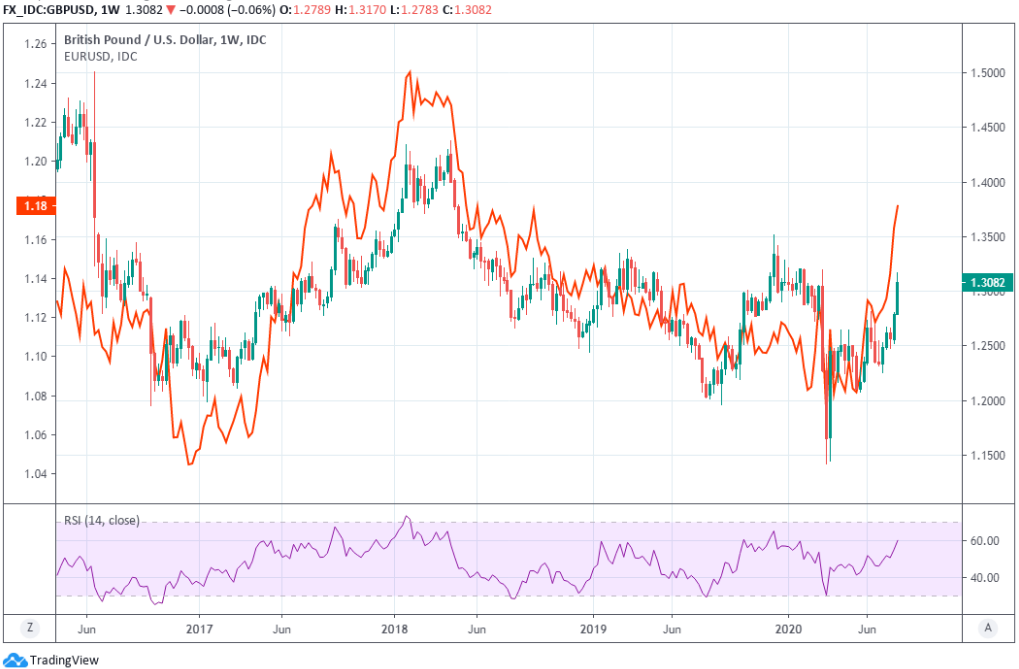 Above: GBP/USD at weekly intervals with EUR/USD (orange line, left axis) and RSI measure of momentum.

The UK government's containment and communications strategies reached new levels of farce last week after Prime Mininster Boris Johnson went from ruling out another national 'lockdown' on July 19, to threatening a new one on Friday.

In order to stave off such a spectacle the governing Conservative Party will continue playing puppet master with the economy, guided by 'the science', in developments that will be sure to hamper the third-quarter recovery.

"After four week-to-week declines in the past five days, the trend in new cases is now falling, as Chart 1 shows. The downturn is real," says Ian Shepherdson, chief economist at Pantheon Macroeconomics, of the U.S. second wave. "The curve in Spain, the hardest-hit country, may be starting to bend, at the margin, but cases are rising strongly in Belgium and the Netherlands, and have hit a second-wave high in Germany. New cases in France might be peaking."

I can't remember a political U-turn as significant as the shift we've seen from "it's time to kick-start the economy!!!" to "the second wave is coming!!!" since the ERM debacle.

The UK government cites "warning signs that the virus may be growing again," but the number of new infections declared each day has so far remained comfortably under 1,000 and averaged 768 through last week.

This is far less than the 2,000 new infections per day in the final week of May when the government set out plans for reopening the economy through June and July. It's also less than the 1k-to1.5k seen in mid-June when supposedly non essential businesses were allowed to reopen.

The government is a risk to Sterling given much of the recent Dollar exodus has been driven by the botched containment effort in the U.S. and resulting effect that renewed restrictions could have on the world's largest economy. 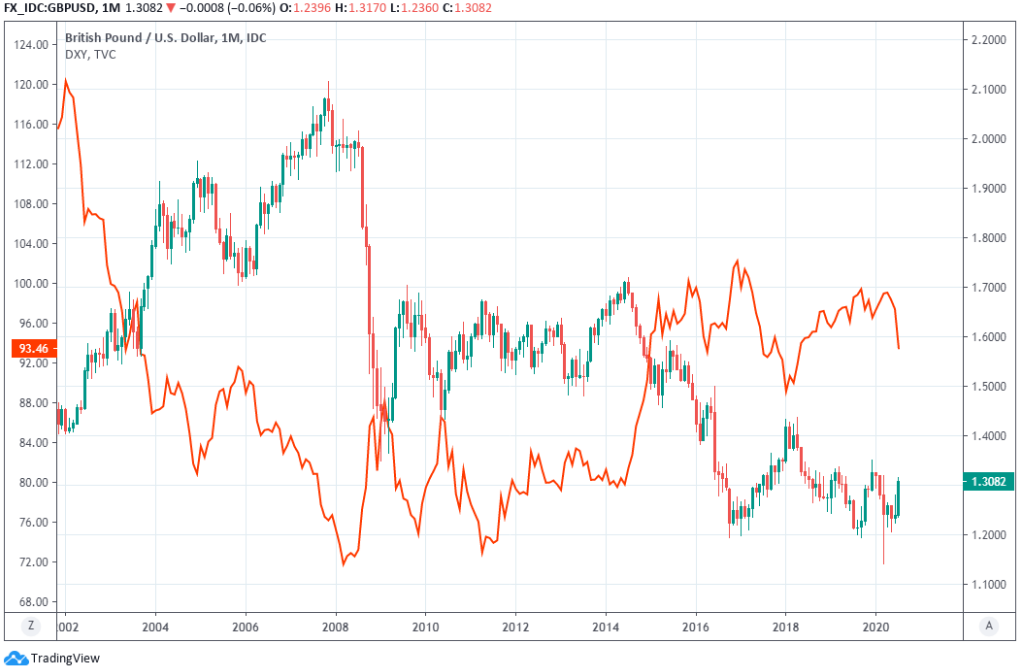 "While much attention will be devoted to the BoE next week, markets will also be looking out for the final July PMIs. On the whole, the flash PMIs were pretty impressive," says Sanjay Raja, an economist at Deutsche Bank. "That said, increasing local lockdowns both at home and abroad should result in a slowdown in activity going forward. We think the PMIs are likely to peak soon, as the rebound in activity slows and weaker sentiment bites. Increasing uncertainty is likely on two fronts: one, a higher prevalence of second waves globally and domestically, and two, the impending Brexit shock later this year. With the labour market outlook another key concern, the negative feedback loop from higher unemployment could act as a dampener on growth."

Thursday's 12:00 Bank of England (BoE) meeting is both an upside and downside risk for Sterling, although it's set to follow a volley of U.S. PMI numbers and will come ahead of the July non-farm payrolls report. The Dollar might be more sensitive to good numbers than bad this time out given the extent to which it's been punished in July as a result of the second wave of infections that stymied the reopening of the economy last month. If economic data was to encourage profit-taking on bets against the Dollar then the Pound-to-Dollar rate is one of the places where it might be felt the most.

"While Q2 GDP data confirmed that European economies have contracted more than the US, recent developments have created more optimism about Europe," says Christian Keller, head of economics research at Barclays. "The solid improvements in Europe’s July PMIs and the recent sharp EUR appreciation versus USD seem to fit that narrative. However, the resurgence in infections in Europe, the worse-than-expected collapse of Q2 GDP in parts of Europe (eg, Spain), and the potential ‘catchup’ of US fiscal policy, could even out the Europe versus US balance. From the US side, next week’s ISM PMIs, the nonfarm payroll data and progress on the negotiations on the Phase 4 package will be crucial. Given recent worsening in weekly claims data, next week’s employment data could well disappoint."