-Coronavirus advances in U.S., Europe and Africa as measures taken.

-California state in lockdown as speculation about London continues.

The Dollar folded in on itself Friday, enabling the Pound-to-Dollar rate to recover sharply off earlier lows after the U.S. Senate pushed ahead with a large spending program and central banks stepped in to successfully catch a falling bond market knife ahead of the weekend.

Pound Sterling recovered nearly 3% on Friday amid widespread weakness in the Dollar and after the Bank of England (BoE) said in the prior session it will buy an additional £200bn of government bonds without specifying the timing of the purchases. That arrested a vicious and days-long sell-off that blighted the bond market even as stocks, commodities, Sterling and all other non-Dollar currencies weakened in what appeared to be a global dash for cash. The Dollar rush pushed Sterling to 1985 lows this week.

“Market volatility and economic uncertainty means that preference for staying ‘liquid’ has risen across a range of market participants. Both money fund and asset managers may want to hold more cash in anticipation of redemptions. Corporates may want to draw on their credit revolvers to maintain enough liquidity. System-wide, this can result in an increase in demand for cash,” says Praveen Korapaty, an economist at Goldman Sachs.

The Dollar suffered its heaviest losses against Sterling, the Aussie and the Kiwi Dollars Friday. It also lagged other large rivals in the bond market rally that took place amid plethora of central bank interventions, after the Senate moved ahead with a coronavirus related spending plan that includes ‘helicopter money’ for households and bailouts for entire industries. That's after European countries including the UK and France announced spending measures worth double-digit percentages of GDP to support economies through what is increasingly a sudden stoppage brought on by the coronavirus pandemic.

Yields were falling as bond prices rose, although U.S yields lagged British and European counterparts. Yields do not normally fall when governments look to raise large sums from markets, as the U.S. Senate did when it pushed ahead with $1.3 trillion spending plan. Price action came as California went into 'lockdown' after U.S. coronavirus cases surged from less than 2,000 to more than 14,000 this week, amid increased testing. New York, Washington and California are the hotspots for the U.S.outbreak. Italy, where deaths outpaced those of China, remained the epicentre in Europe but there have been continuing sharp increases in other major economies this week.

“The recent jump in Treasury yields, despite more carnage in the stock market, can't be allowed to continue as economic activity collapses,” says Ian Shepherdson, chief economist at Pantheon Macroeconomics in a Thursday note. “With rates at the zero bound, and the Fed adamant that it does not want negative rates, what's left is more QE, or an explicit policy of yield caps.”

Investors have appeared to revolt over the spending plans of already highly indebted governments this week, voting with their feet when fleeing financial markets and again when bidding largely for Dollar cash with the proceeds of other asset sales, leading to a sharp spike in bond yields. For economic and financial conditions, that yield spike had offset the intended impact of earlier rate cuts from the Bank of England, Federal Reserve (Fed) and others at a time when their economies could least afford it.

But Thursday saw the BoE step in with another rate cut and a £200bn expansion of its quantitative easing (QE) bond buying program, while the Federal Reserve is buying more than $100bn of U.S. government bonds ahead of the weekend, with the majority of purchases before the 10-year tenor. The European Central Bank also took action when it said it will buy €750bn of continental bonds in a sweeping increase to its existing and already-once expanded QE program. Central banks are increasingly offsetting a large part of the increase in bond supply that’s expected to come from spending packages. 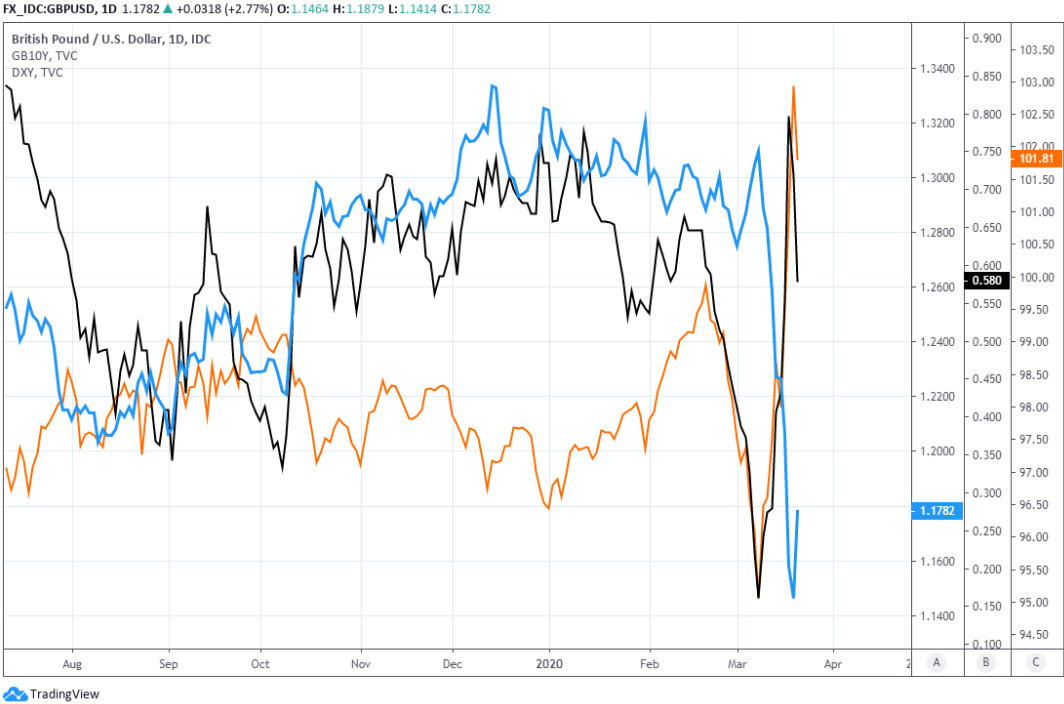 “The race by global policymakers to catch up with real world developments looks to have made some progress with the dollar reversing some of its recent large gains,” says Derek Halpenny, head of research, global market EMEA and international securities at MUFG. “We have certainly had a more impressive policy response in the last 48hrs that played a role in avoiding the brutal market moves that took place on Wednesday. More USD swap line across an additional 9 central banks globally, the BoE cutting rates and reactivating QE were the latest central bank steps. But the economic data that is on its way suggests the governments will still need to do more with quick injections of fiscal stimulus. A key objective has to be to avoid this turning to a prolonged downturn.“

Central bank actions had halted the stampede into the Dollar and given other currencies a breather Friday, although Chancellor Rishi Sunak is expected to announce further support for the economy in the noon session.

This time the Chancellor will be offering aid to workers whose incomes have been affected by efforts aimed at containing a coronavirus epidemic that’s gained momentum rapidly and encouraged panic buying in shops while turning high streets and other public haunts desolate. It’s not clear what Sterling or the British bond market will make of the move after suffering a rare, simultaneous and punishing sell-off that lifted the 10-year yield more than 40% on Wednesday. That was when the government announced it would spend more than £300bn on loan guarantees and other forms of support for companies.

"GBP has been aggressively sold in the USD session, supportive of the view that this has been a funding led decline," says Kamal Sharma, a strategist at BofA Global Research. "Brexit is well and truly off the radar for now, but the elephant that is the current account deficit has entered the room...The UK authorities appear to have been vindicated in their decision to build FX reserves to guard against a potential current account led attack on the currency." 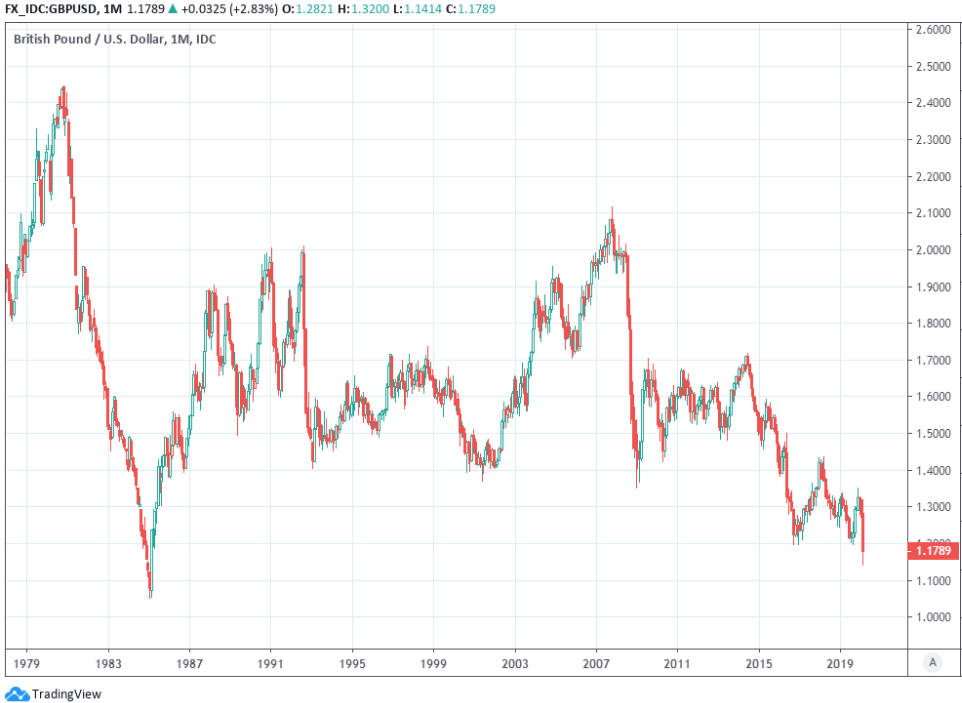 The Dollar was doubling over barely a day after the Fed extended currency swap agreements to nine more central banks in an apparent effort to contain a surge in the greenback that’s been so severe it could pose an additional threat to a global economy that’s already cratering amid the coronavirus pandemic.

These compliment existing swap lines that provide the Bank of Canada, European Central Bank, Swiss National Bank, Bank of England and Bank of Japan with access to a large supply of Dollars upon request without those banks having to enter the market. Central banks disclose little about their day-to-day activities so it’s not possible to determine with certainty whether the swap line extension explains part of Friday’s global riposte against the Dollar.

An FX swap is an agreement to buy one currency (Dollars) with another off-market and then sell it back to the counterparty on a prearranged date at a pre agreed price. These transactions would enable other central banks to sell large clips of the runaway Dollar on the open market and buy back their domestic currencies, lifting the domestic currencies against the Dollar in the process. Doing this enables those central banks to counter the inflation and growth threat posed by currency devaluation without burning through precious foreign exchange reserves. And it might also lead other central banks to do the Fed a favour while paying for the privilege, seeing as a rapidly strengthening Dollar could hurt an already-in-trouble U.S. export sector and further stoke the ire of President Donald Trump, who’s ever breathing down the bank’s neck.

“Central banks have stepped up through a multitude of measures aimed at restoring the financial plumbing and easing funding pressures for corporates. Markets now have to balance a deteriorating growth outlook against expansive fiscal and monetary stimulus – while monitoring the risk build-ups that have occurred through the cycle,” says Daniel Been, head of FX research at ANZ. "We see the COVID-19 having a sustained impact on global businesses making the job of policy makers harder, and the risks to growth more extreme."