-GBP/USD surges after BoE goes all-in with support for economy.

-Cuts Bank Rate to historic slow and puts£200bn QE on the table.

-Is this a 'dead cat bounce' ahead of the next brutal GBP sell-off?

-Market sentiment toward GBP has soured and outlook is clouded.

The Pound-to-Dollar rate was in recovery mode Thursday after surging in response to a surprise Bank of England (BoE) decision to go all-in with its support for the economy, although whether or not the move is simply a 'dead cat bounce' ahead of another brutal sell-off remains to be seen.

Sterling surged following the BoE's decision to cut Bank Rate from 0.25% to 0.10%, a fresh historic low, and to add an additional £200bn to its quantitative easing (QE) program. The decision is part of a broader effort to support the economy through the unprecedented coronavirus crisis that's seen schools closed, public events cancelled and which could yet see Britons subjected to the draconia 'lockdowns' in force in France, Spain, Italy and other countries.

The BoE said containing the viral pneumonia "will result in an economic shock that could be sharp and large," necessitating further support for an economy that was this week subjected to a perilous tightening of 'financial conditions' due to a rout in the typically safe-haven government bond market.

"Over recent days, and in common with a number of other advanced economy bond markets, conditions in the UK gilt market have deteriorated as investors have sought shorter-dated instruments that are closer substitutes for highly liquid central bank reserves. As a consequence, UK and global financial conditions have tightened. At its special meeting on 19 March, the MPC judged that a further package of measures was warranted." 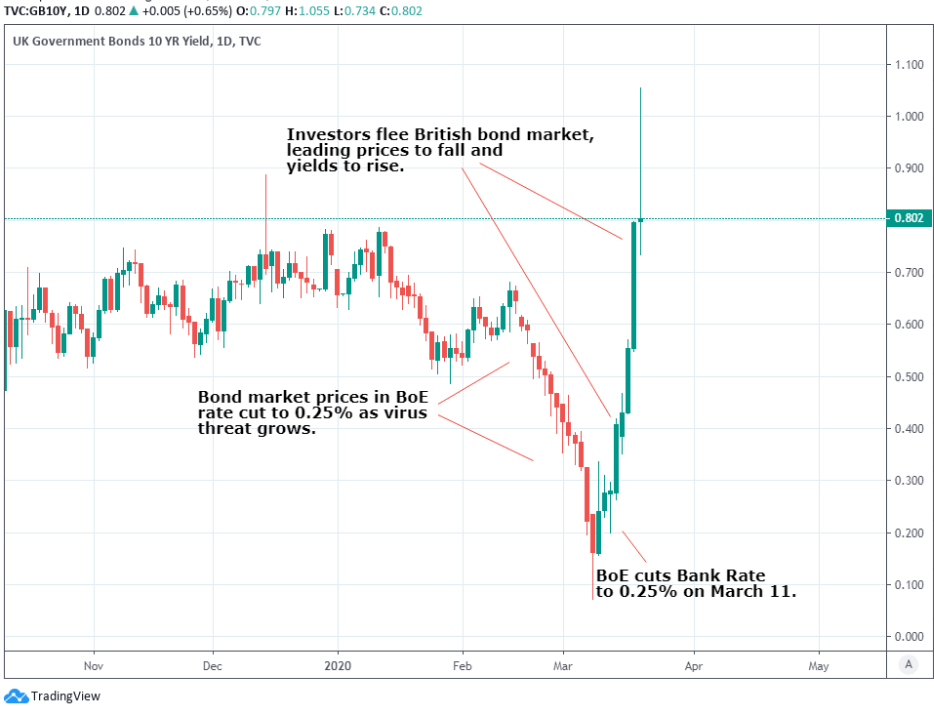 Investors have rotated into cash en masse the world over this week, dumping stocks, commodities and other risk assets then fleeing to the liquidity and safety of the mighty Dollar and American bond markets. But the BoE's headache was caused by the sell-off in the British bond market, which normally benefits from inflows in times of crisis but was steam-rolled when the world's investors voted with their wallets for Dollar cash instead of Pounds and British bonds.

The result was a rare, simultaneous and punishing sell-off in both Sterling and the Gilt market that lifted the 10-year bond yield more than 40% on Wednesday and completely nullified the impact of the BoE's earlier 50 basis point cut to Bank Rate. That's a problem for the BoE because as the UK's 'risk free rate' the 10-year yield gets baked into just about every other interest rate charged across the economy.

"The Committee has gone big and early, again. The £200B of asset purchases greatly exceeded economists’ expectations," says Samuel Tombs, chief UK economist at Pantheon Macroeconomics. "Details about the mix and timing of asset purchases are missing now but will provided by the Bank "in due course." 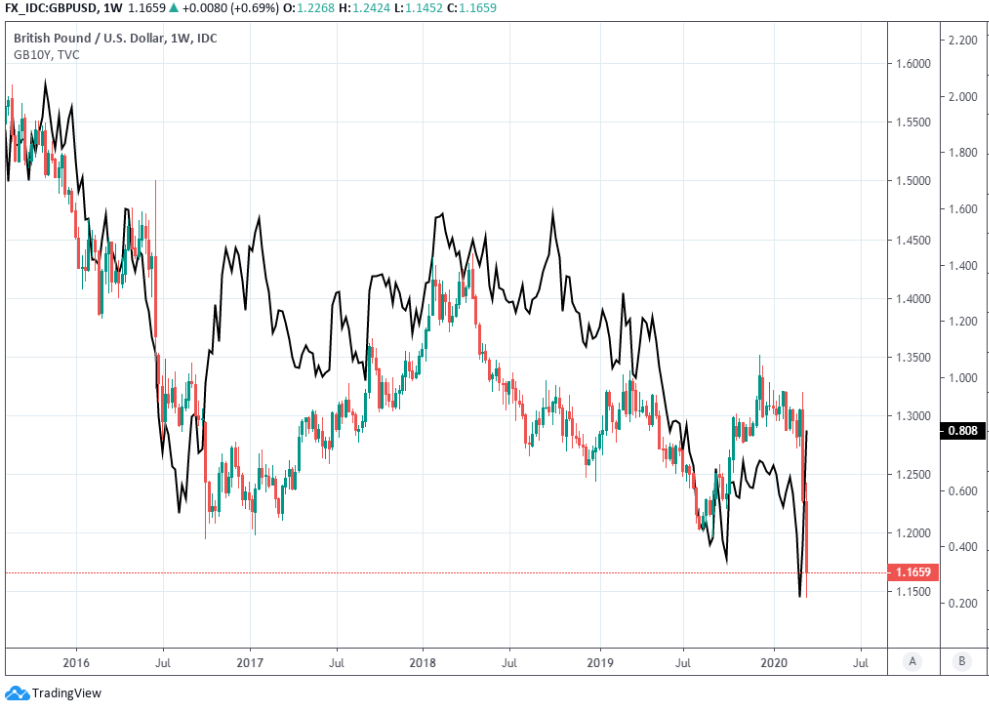 "The MPC’s statement that the “majority” of the additional asset purchases will comprise government bonds leaves open the possibility that corporate bond purchases might play a bigger role than in the past. Only £10B worth of corporate bonds have been purchased to date," Tombs says.

The BoE had cut rates to reduce interest costs for companies and households, supporting the economy in the process, but Wednesday's bond market rout will have lifted interest costs for everyone sooner or later if not addressed by the BoE. Sterling normally has a positive correlation with bond yields but in the last fortnight that has gone into reverse, potentially indicating capital flight from the UK.

Thursday's expanded QE program will see the BoE buy an additional £200bn of British bonds with the majority likely government bonds. Such firepower will squash yields, which move in the opposite direction to prices, and reduce interest costs for HM Treasury and everybody else in the country. But the announcement has only partially reversed this week's yield surge, underlining the ongoing threat to Sterling. 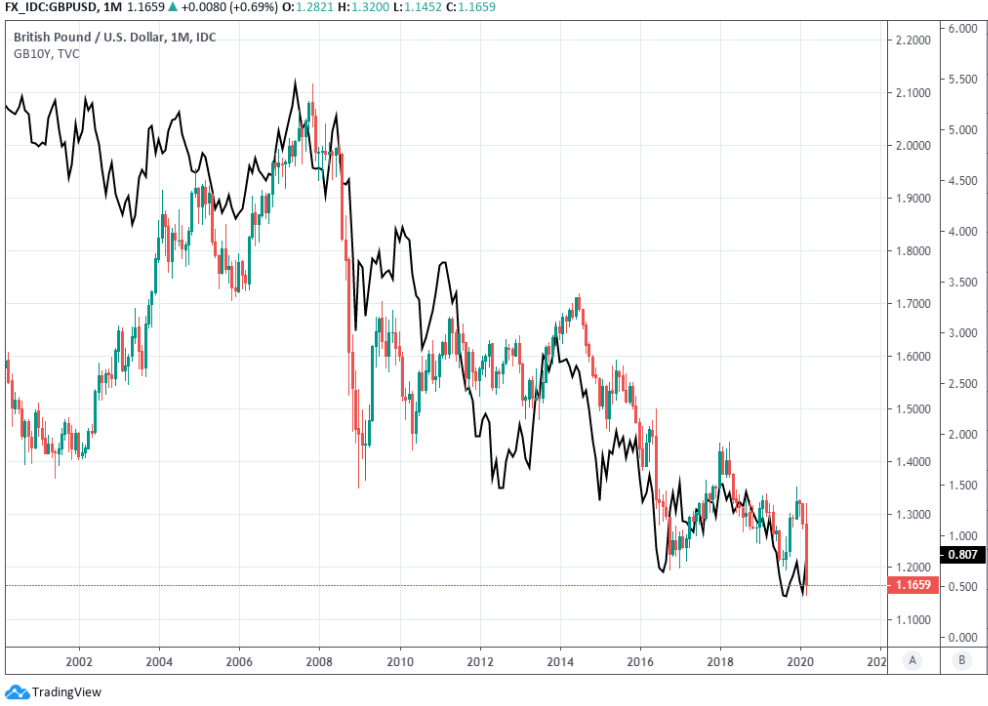 "Traders appear to be giving GBPUSD a bit of a break this morning as everything bounces mildly with the most recent swap line announcement from the Fed, but we’re still truly in uncharted territory here, which makes trying to pick a bottom dangerous," says Eric Bregar, head of FX strategy at Exchange Bank of Canada. "The Bank of England has just cut interests by 15bp to 0.10% and announced an increase its QE program...GBPUSD is now continuing its bounce to trade 1% higher on the session."

Sterling fell more than 5% to its lowest level against the Dollar since 1985 amid the rout in the British bond market on Wednesday, briefly trading below the 1.15 handle, although some analysts are advocating that clients bet on even steeper falls toward the 1.05 handle for the Pound-to-Dollar rate up ahead. That would be another 1985 low and it's that thinking in the market, as well as a complete loss of technical support on the charts that's clouding the outlook for the Pound.

The Pound-to-Dollar rate was rallying following the BoE's Thursday decision but the 10-year bond yield was still up for the session, indicating continued outflows, while analysts and investors are still wagering against the currency.

As a result, the nascent rally could yet turn out to be little more than a 'dead cat bounce' ahead of another punishing sell-off, although it does come at a time when the Federal Reserve is increasingly leaning back against a runaway Dollar that threatens not only the American and UK economies but also the global economy. 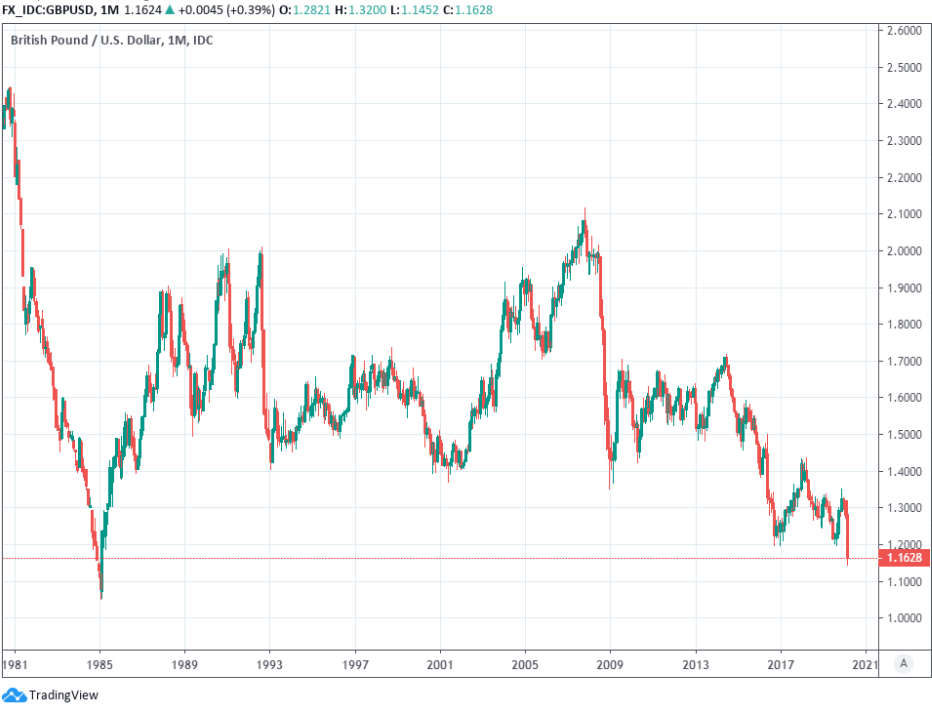