The Dollar softened Thursday after the Federal Reserve (Fed) extended currency swap agreements to nine more central banks as it seeks to contain a surge in the grenback that’s been so severe it now poses an additional threat to a global economy that’s already cratering amid the coronavirus pandemic.

The Federal Reserve has extended Dollar swap lines to the Reserve Bank of Australia, the Banco Central do Brasil, the Danmarks Nationalbank (Denmark), the Bank of Korea, the Banco de Mexico, the Norges Bank (Norway), the Reserve Bank of New Zealand, the Monetary Authority of Singapore, and the Sveriges Riksbank (Sweden). These compliment existing swap lines that provide the Bank of Canada, European Central Bank, Swiss National Bank, Bank of England and Bank of Japan with access to a large supply of Dollars upon request without those banks having to enter the market. 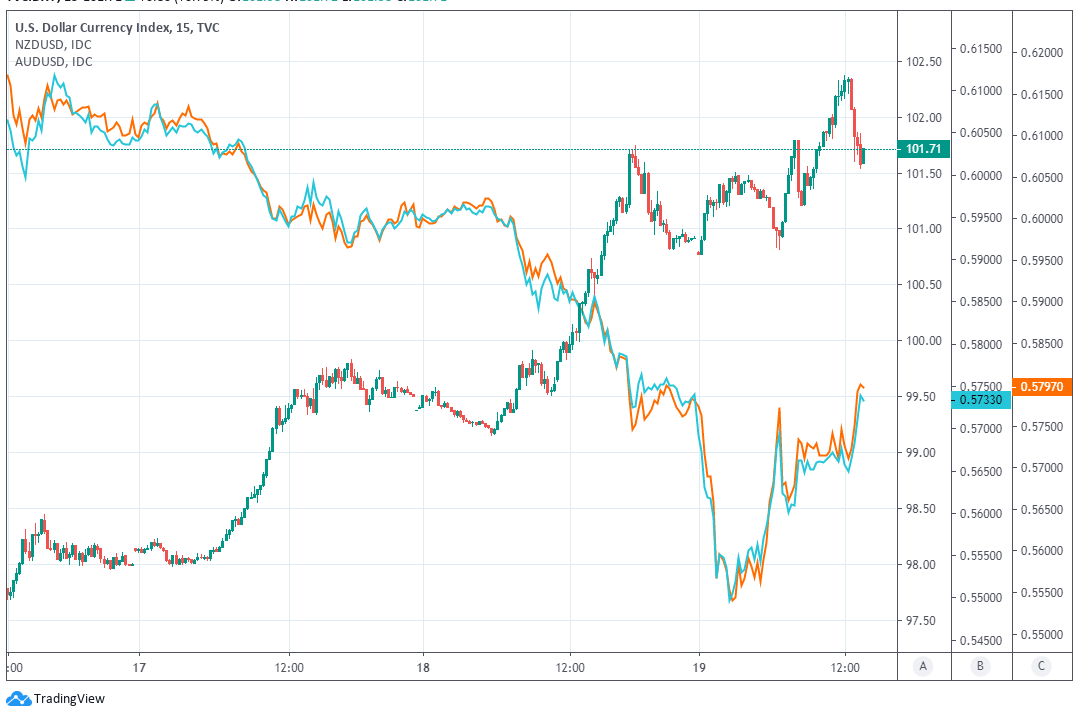 Thursday's decision comes after the Norges Bank warned that it is increasingly contemplating direct intervention in the currency market to arrest the 15% increase seen in the USD/NOK rate since Wednesday morning. That exchange rate was still up 3.4% for the session following the Fed's announcement on Thursday even after falling more than 3% in response to it. All currencies have devalued sharply against the Dollar amid the unprecedented coronavirus threat to the global economy and, increasingly, the monetary system given that it's pushing already highly-indebted countries to offer virus-related support packages totalling double-digit percentages of GDP.

“Foreign small, and medium-sized businesses are like those panic-driven customers that scramble for said toilet paper in local grocery stores. These SME's have critical needs for USD funding as they know their activities will be closed, or seeing reduced activity, for the foreseeable future. The Fed is like your local grocery store - slashing funding costs and trying to ensure all who need dollars, have access,” says Bipan Rai at CIBC Capital Markets. “Now imagine a SME in the UK. Not only do you not know how long you will be shut for, but you don't even know what normal looks like when you get back to work. The UK/EU transition period ends this year. What makes things worse is the possibility of a lockdown in London - the hub of global FX trading.” 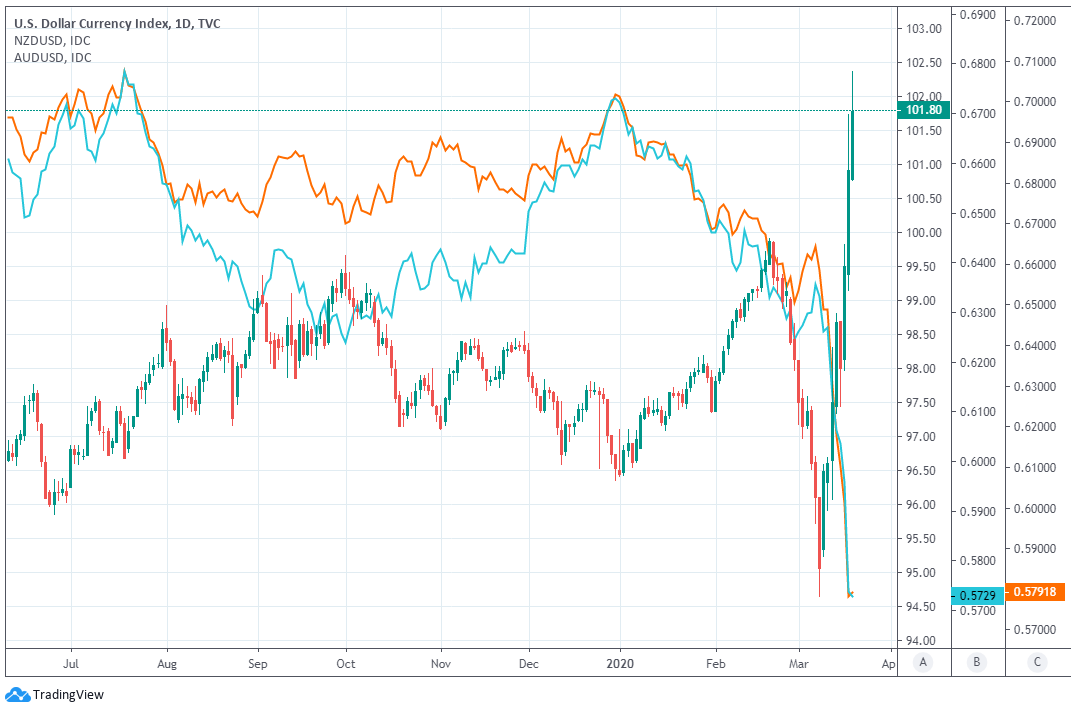 The Fed’s intervention comes after an eight day surge in the greenback that’s lifted the Dollar index by 7.8% from trough to peak, while crushing all other currencies to such a degree that devaluation could now act as a further headwind to the affected economies by raising the cost of much needed imports and lifting inflation, which can reduce real GDP growth. The Dollar has surged after stock, commodity and even typically safe-haven bond markets have collapsed across the globe as investors have liquidated portfolios and rotated into cash at a rate of knots and to a degree that’s not been seen since at least the financial crisis. But the Thursday swap agreement, combined with other actions, could soon lean further against the greenback.

“Despite a coordinated, global push to open dollar swap lines, USD basis swap markets remain dislocated, the pass-through effects of which are making their way into the spot market more so than in traditional USD funding squeezes. Add these measures of dollar tightness to the growing list of market barometers that need to normalise before we can begin to consider calm returning to markets. Once they do, there are an abundance of undervalued currencies to buy against the dollar,” says Tim Graf, head of macro strategy, EMEA at State Street Global Markets. “Sterling and the Australian dollar are now at multi-decade lows and the Norwegian krone is at an all-time low against the USD. Most traditional models of fair value mark all these currencies as extremely cheap. However, until stresses in the financial system and specifically the market for dollars abate, these are value traps, not value opportunities.”

An FX swap is an agreement to buy one currency (Dollars) with another off-market and then sell it back to the counterparty on a prearranged date at a pre agreed price. These transactions would enable other central banks to sell large clips of the runaway Dollar on the open market and buy back their domestic currencies, lifting the domestic currencies against the Dollar in the process. Doing this would enable those central banks to counter the economic threat posed by currency devaluation without burning through precious foreign exchange reserves. And it might also lead other central banks to do the Fed a favour while paying for the privilege, seeing as a rapidly strengthening Dollar could hurt an already-in-trouble U.S. export sector and further stoke the ire of President Donald Trump, who’s ever breathing down the bank’s neck.

A stronger Dollar raises import costs and can restrain GDP growth in developed world economies but in the emerging markets like Brazil, which now has a $60bn swap line, a strong Dollar can imperil the public finances as well as threaten the economy because many developing world countries have high levels of debt denominated in foreign currencies like the greenback. This gets more expensive to service as the Dollar rises and for countries that already have large budget deficits, high debt levels and weakening currencies, a runaway Dollar can be an existential threat. 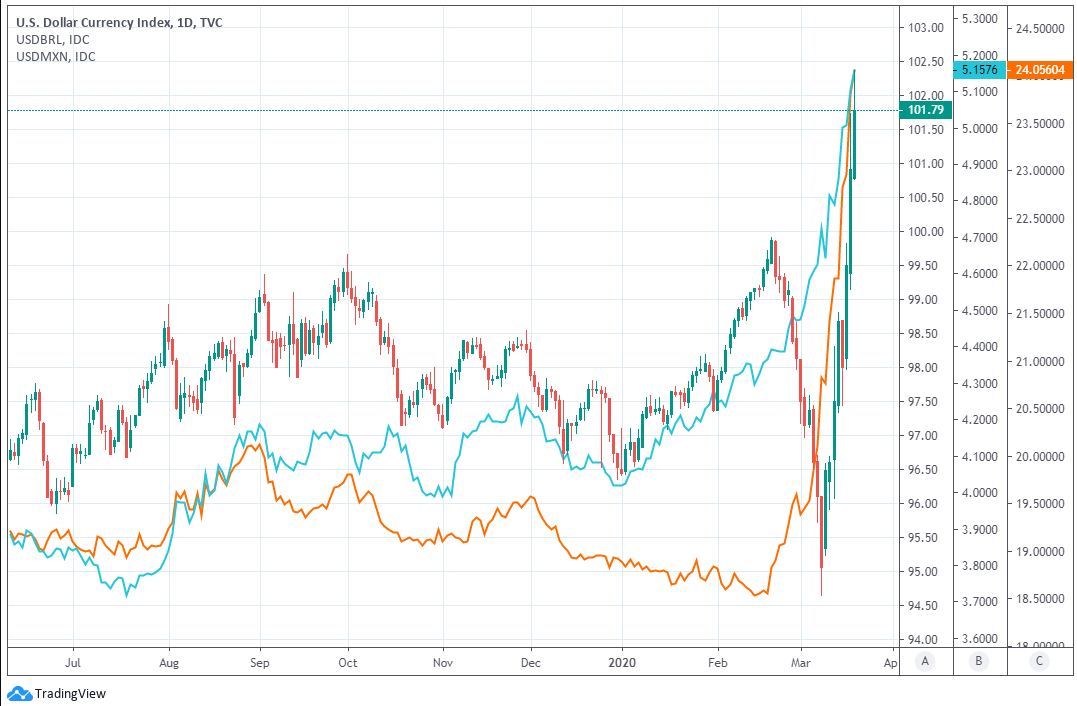 Above: Above: Dollar Index surges at daily intervals as USD/MXN (orange) and USD/BRL (blue) also advance.

Swap lines have been expanded as economies everywhere face an unprecedented crunch from ‘social distancing’ and ‘lockdown’ measures aimed at combating the coronavirus that has made Europe its preferred home outside China and is increasingly asserting itself in the U.S. as well as more than 100 other economies. The bank has already cut its interest rate back to zero and relaunched its crisis-era quantitative easing program to support the U.S. economy through its own coronavirus epidemic that's put San Francisco into a so-called lockdown and disrupted life across the rest of the country.

The European Central Bank announced overnight it will launch a Pandemic Emergency Purchase Programme (PEPP) of quantitative easing that will see Christine Lagarde's Governing Council buy an additional €750 billion in European government and corporate bonds before the year is out. Meanwhile, the Canadian government announced a C$27bn spending package and a C$55bn set of tax reliefs designed to improve liquidity in the private sector. Those measures were announced as the U.S. senate passed a similar coronavirus package and came ahead of further monetary measures taken by the Reserve Bank of Australia among others.