-With mammoth €750 billion top up of earlier QE program.

-After speculative positioning nears neutral in wake of rally.

-USD demand a risk to EUR but joint EU debt an opportunity. 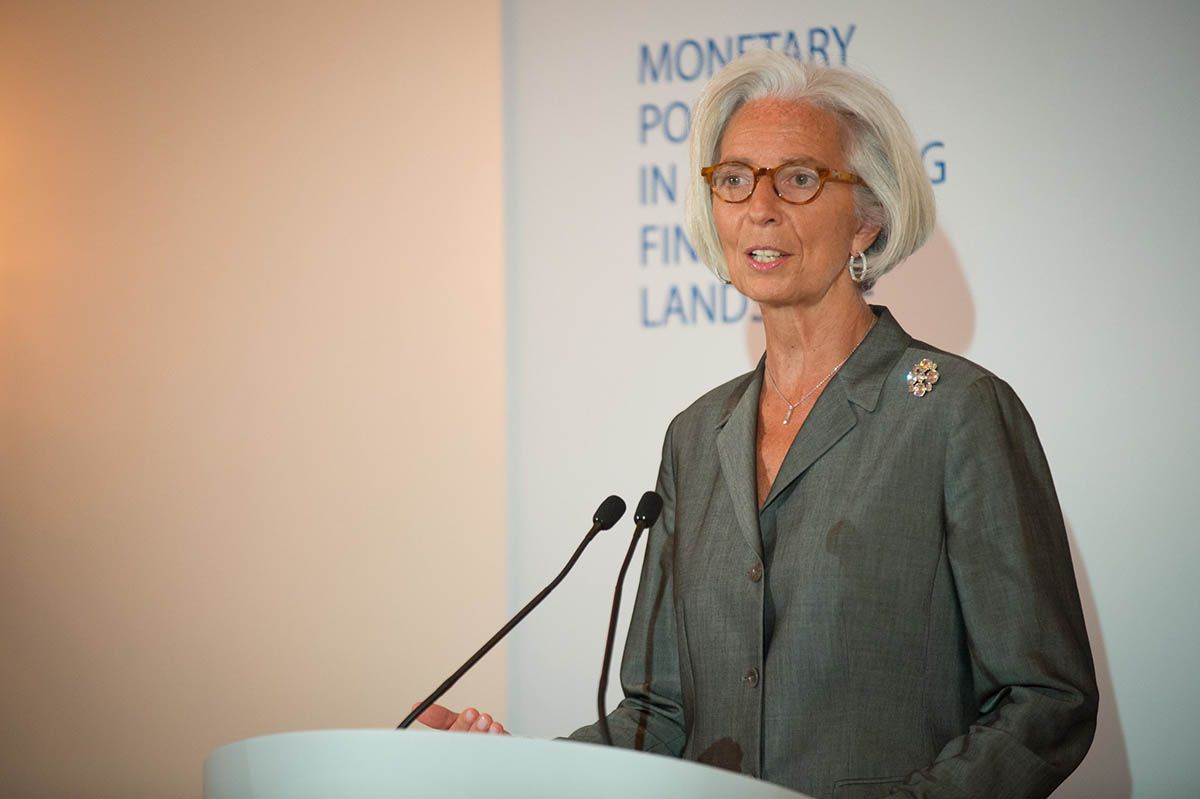 The Euro-to-Dollar rate was under intensifying pressure on Thursday following the overnight announcement of a mammoth European Central Bank (ECB) increase in the size of its quantitative easing program that has so-far arrested a sharp spike in government bond yields across the continent.

European Central Bank policymakers announced overnight they will launch a Pandemic Emergency Purchase Programme (PEPP) of quantitative easing that will see Christine Lagarde's Governing Council buy an additional €750 billion in European government and corporate bonds before the year is out. Purchases will be conducted at least until the end of 2020 under the new program, which can buy a broader array of instruments than the existing facility including bonds of the Greek government as well as non-financial corporations.

"The Governing Council of the ECB is committed to playing its role in supporting all citizens of the euro area through this extremely challenging time. To that end, the ECB will ensure that all sectors of the economy can benefit from supportive financing conditions that enable them to absorb this shock. This applies equally to families, firms, banks and governments," the bank says.

The decision came following an exodus from continental financial markets that put simultaneous pressure on risk assets like stocks as well as traditional safe-haven assets like government bonds. Investors piled into two-year Treasuries this week but sold safe-haven 10-year bonds as well as stocks, oil and just about every European currency out there, leading 10-year yields to rise as much as 50% on Wednesday even as the continent's stock markets collapsed. 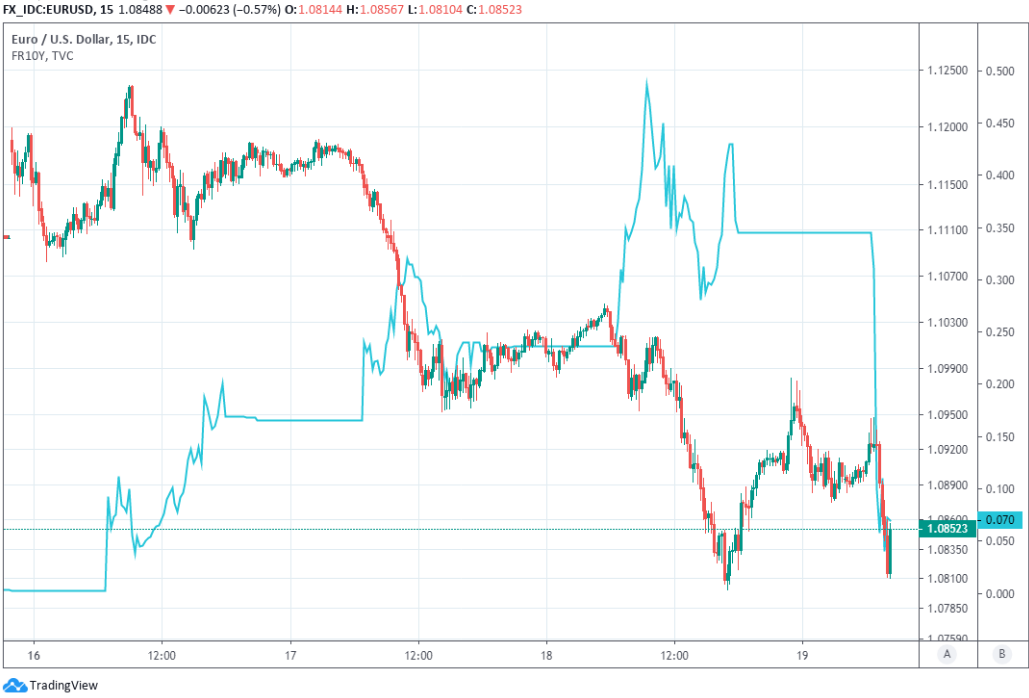 The Euro-to-Dollar rate was briefly quoted -1.01% lower at 1.0827 in early European trading before paring losses on Thursday.

ECB policymakers already agreed earlier this month to lift the rate of bond purchase under the existing QE program to €140bn per month as well as provide more cheap financing for commercial banks, although the market and some other commentators were unhappy with the bank's response to the continental coronavirus crisis because it didn't cut an already-negative deposit rate by an additional 10 basis points. It still hasn't cut the deposit rate but has stepped up its other actions including the offering of a familiar pledge to do "whatever it takes" to see companies and households through a crisis that's sure to deal unprecedented damage to the European economies.

"We take this decision and this statement as an unlimited commitment to stabilise financial markets, and in particular to counter the recent increase in EGB spreads. With this package, the ECB sticks to its view that the problem to address is ensuring liquidity to financial markets and credit to the economy, while a rate cut that was expected by some market participants was not relevant in the current environment," says Philippe Gudin, an economist at Barclays.

Markets re-entered meltdown mode even after governments announced emergency plans to combat the coronavirus pandemic that's put three of Europe's major economies into a draconian 'lockdown' in which citizens are confined to homes and the operations of companies are severely disrupted. The responses included in some parts, plans for already heavily indebted governments to spend large clips of GDP covering expenses and liabilities of companies and households through debt guarantees and direct handouts. 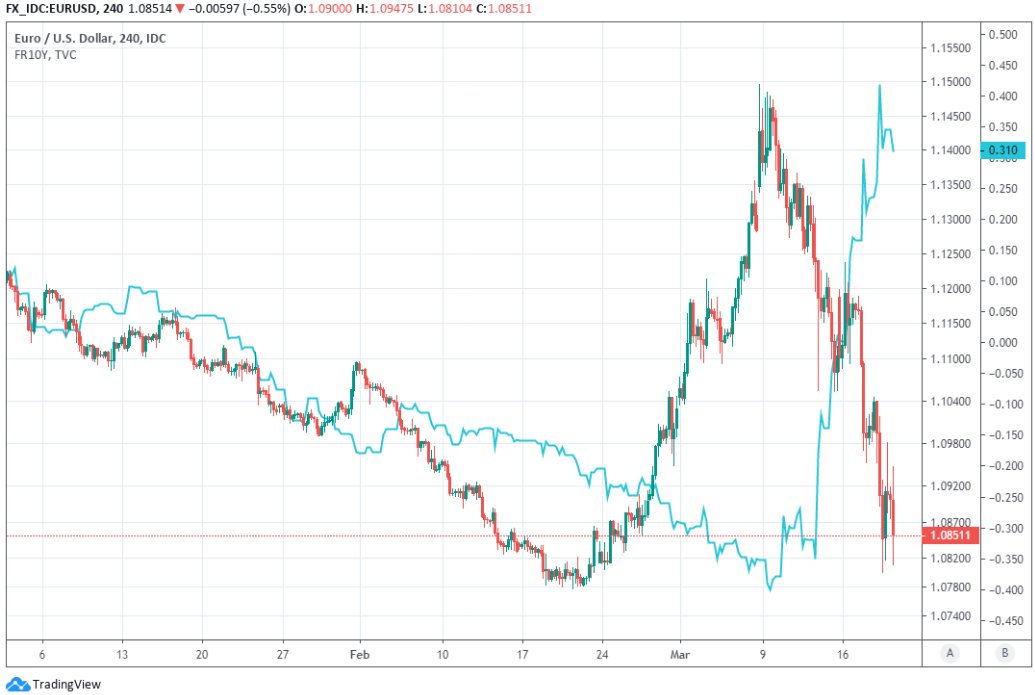 "EUR/USD has eroded the convergence of support offered by the 78.6% retracement, the early and mid-September lows and the October 8 low at 1.0941/26 and is on course for the 35 year uptrend at 1.0782/74. This is major support and it is expected to hold the downside. Failure here would be considered to be a major break down and would target 1.0352 the 2016 on the way to 1.00," says Karen Jones, head of technical analysis for currencies, commodities and bonds at Commerzbank.

The Euro has been bleeding lower since topping out near 1.15 last Monday in what is a potentially significant turn in the market because it coincided with investor positioning in the futures market swinging from a large net ‘short’ to an almost neutral position following days of extreme volatility and ultimately, losses for stocks, commodities and emerging market currencies. Previously investors had borrowed and sold Euros to fund bets on higher yielding currencies and other assets, leaving them with a large ‘short’ position in the single currency that was reversed promptly in late February as stocks and emerging markets crumbled in tandem with the advance of coronavirus into Europe. 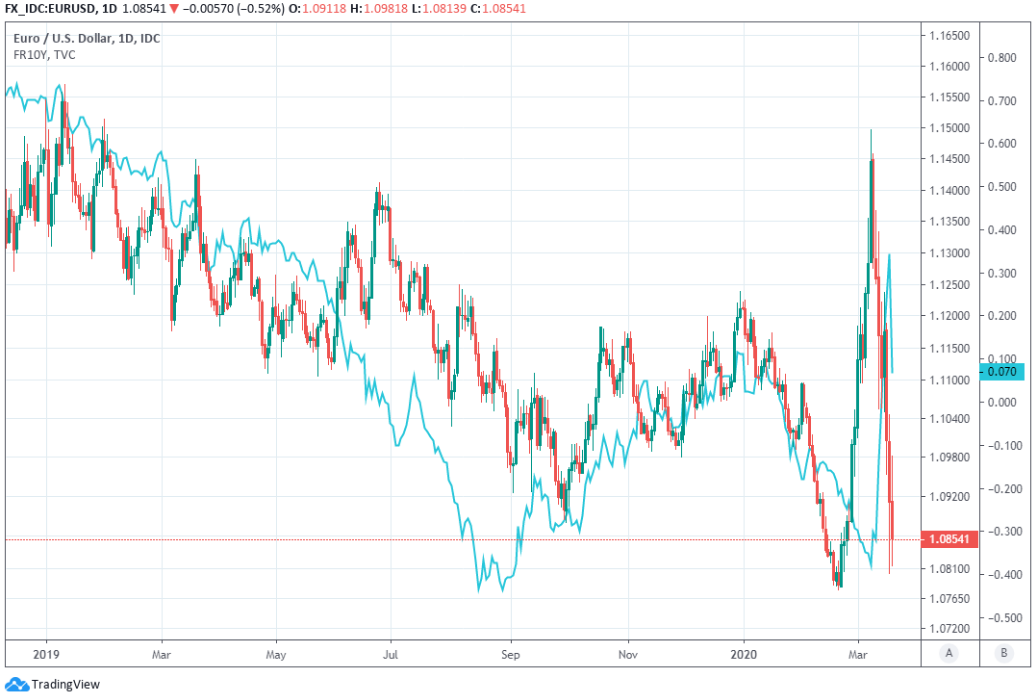 “Net EUR short positions plummeted last week suggesting the EUR had been heavily oversold and that carry trades have been reversing. Now that net positions are close to neutral, the worsening economic outlook in the Eurozone could pressure the EUR,” warns Jane Foley,  a senior FX strategist at Rabobank. "USD net longs dropped sharply last week following the Fed’s surprise 50 bp rate cut and the expectation that it will cut again soon. That said the sharp widening of cross currency basis swaps in the latter part of last week signalled a USD shortage in the money market. This could translate into an increase of USD longs in the next set of data."

Europe's single currency rallied by 6% through the early weeks of March as investors liquidated bets on risk assets and bought back the Euros they’d been funded with, but Chicago Futures Trading Commission data revealed this week that a large part of this process completed in the week ending March 10, which coincided with the Euro reaching its highest levels. This could explain why the Euro has fallen amid the current bout of risk aversion in which stocks and commodities have suffered further steep losses, when previously it spiked sharply as risk asset prices tanked. It could also leave investors minded to rebuild their 'short' position given the economic threat to Europe.

Rabobank’s Foley says this clear out of 'shorts' could leave the Euro vulnerable to the worsening outlook on the continent, where growth is forecast by some analysts to fall as much as -24% in the second quarter as the bill for having become the epicentre of the global coronavirus pandemic comes in. Europe’s economy had already weakened notably before the virus ever appeared in China’s Wuhan and since then three of the Eurozone’s four largest economies have gone into a draconian form of  ’lockdown’.

"If the ECB needs to buy more Italian bonds to curtail yield spreads, the ECB will do so. This should dramatically reduce the risk that any blowout in spreads within the Eurozone could materially impact the ability of any government in the region to finance its fiscal “whatever it takes” response to the pandemic," says Holger Schmieding, chief economist at Berenberg. 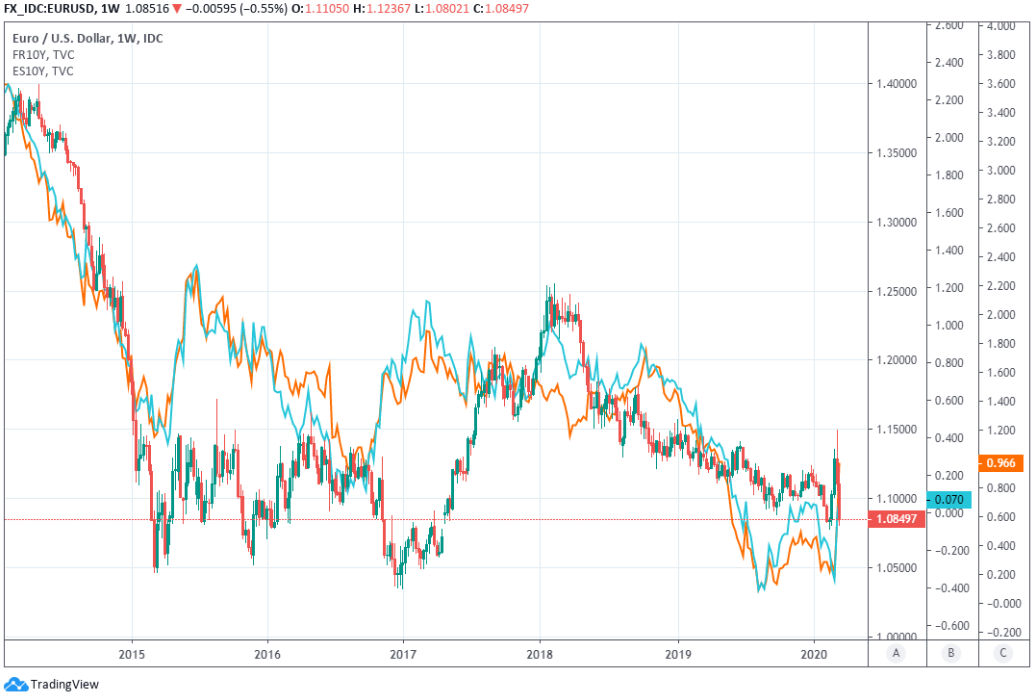 Europe’s fragile economy had been too far gone for central bank monetary policies to be able to stabilise it even before the coronavirus ever first arrived in Italy, the continent’s own epicentre, which had left the already-undervalued currency to do a lot of the heavy lifting for policymakers who’d run out of ammunition in the monetary space and kneeled for too long at the altar of austerity in the political arena. And now the Euro doesn’t have the cushion of the market’s once-weighty short trade leaning against it in the good times while lifting it in the bad, the single currency could be vulnerable going forward.

But the seeds of a longer-term recovery for the Euro-to-Dollar rate may now be being sown amid the outbreak of viral pneumonia that’s seen citizens largely confined to their homes under draconian enforced quarantines in Italy, Spain and France, which are likely to necessitate a policy response like no other seen before. German Chancellor Angela Merkel said Wednesday that she’s open to using “joint debt issuance” in order to combat the economic fallout of the virus, a past objection to which has long prolonged if-not prevented the deleveraging and reflation of the indebted ‘periphery’ Eurozone countries that have weighed so heavily on the bloc’s economic performance since the debt crisis of 2011/12.

Any decision to go ahead with "joint debt issuance," whether intended as such or not, would be a step toward a 'fiscal union' to match the 'monetary union' that was in the pipeline long before the official 1999 launch of the Euro. The absence of such a fiscal union, or risk sharing mechanism, is widely cited as being a substantial factor in the Eurozone's chronic economic underperformance and creation of one amid the wrack and ruin of a crisis might sow the seeds of a long-term recovery for both the economy and the single currency.

"Exceptional circumstances demand exceptional action. We would not rule out that policy makers may still agree to a targeted and temporary issuance of joint “corona bonds” in the next few weeks. The outcome of the nascent debate remains unclear. But as was the case during the euro crisis, previous taboos can be shelved in an acute emergency," says Berenberg's Schmieding. 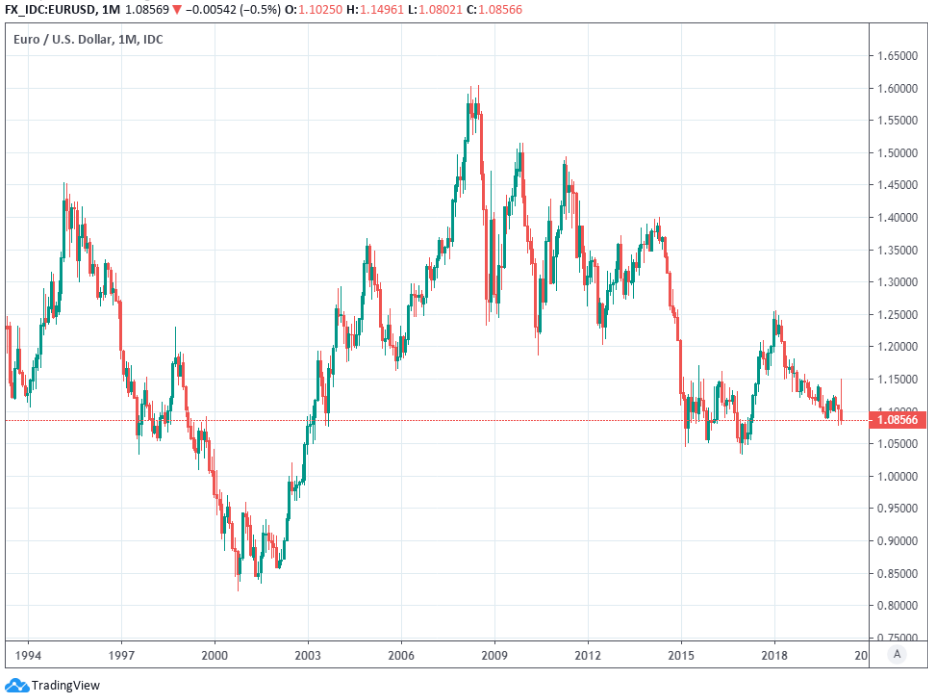