- ECB stimulus package given thumbs down by the market.

- TLTROs, QE & bank capital release not enough for many.

- Measures may do little to address EZ needs in virus crisis.

- Careless comments and calls for help from Govs aggravate. 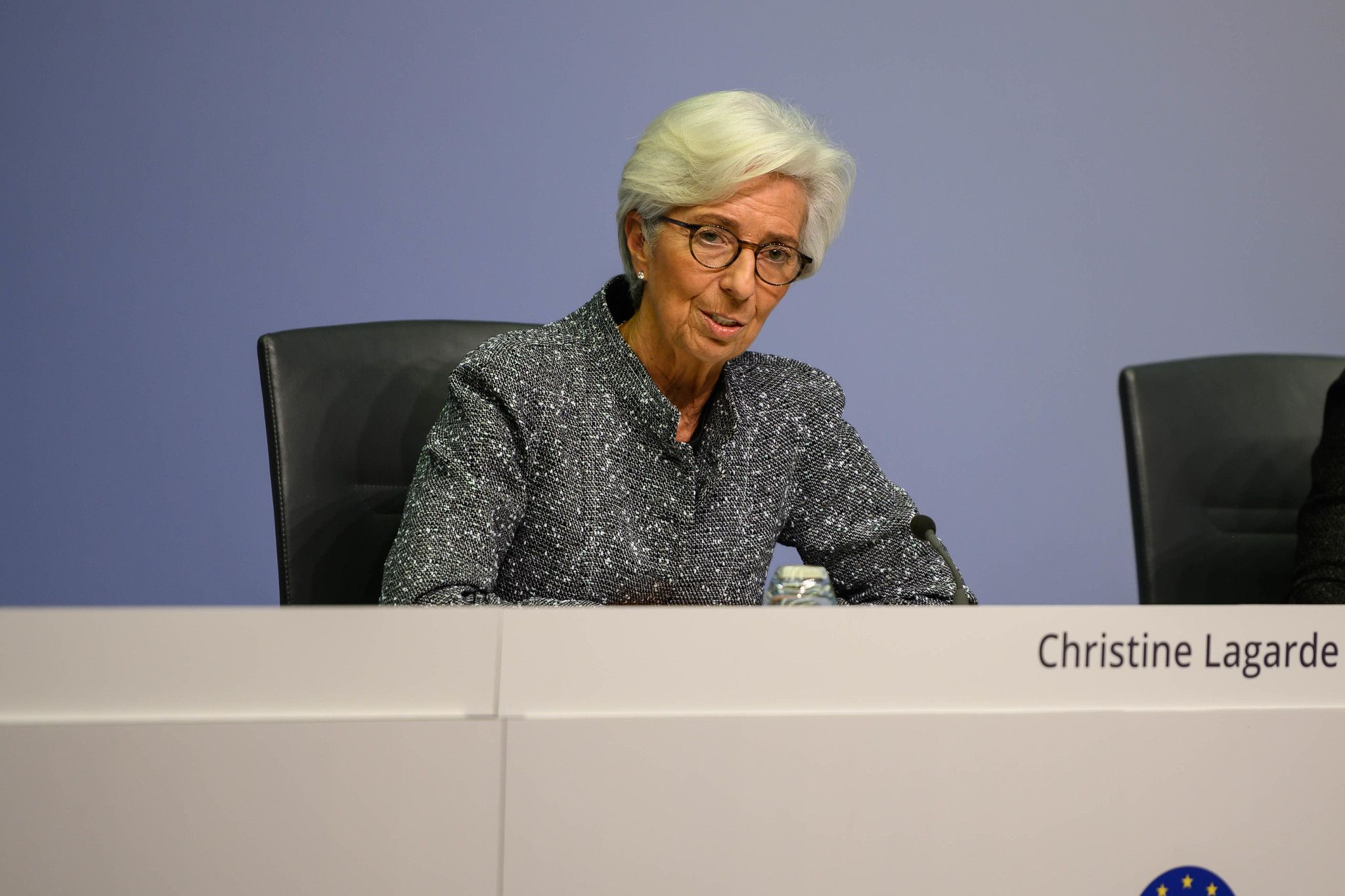 Europe's single currency whip-sawed Thursday after the European Central Bank (ECB) announced a "comprehensive package" of measures to support an already struggling economy as authorities battle against a coronavirus epidemic, but volatility has since given way to heavy selling of the Euro.

The Euro surged against the Dollar when the ECB left its deposit rate unchanged at -0.50%, with rates on 'main refinancing operations' and the 'marginal lending' facility also unchanged at 0% and 0.25% respectively.

But price action was choppy as markets digested the stimulus that was unveiled before eventually giving it a decisive thumbs down, sending the Euro-to-Dolllar rate tumbling in the process.

And losses were amplified by careless remarks from President Christine Lagarde, who initially appeared to indicate the ECB would not be coming to the rescue in the event of a run on the fragile Italian government bond market.

"We really didn’t expect: “ECB NOT HERE TO CLOSE BOND SPREADS.” That might be true in some sense of what they deem their mandate, but not what you say when markets are selling off on a day like today," says Jordan Rochester, a strategist at Nomura. "It does make our confidence stronger in calling for USD higher here as funding is becoming an issue in certain pockets."

Lagarde in CNBC interview: I am fully committed to avoid any fragmentation in a difficult moment for the euro area. High spreads due to the coronavirus impair the transmission of monetary policy. (1/3)

The ECB will use targeted-long-term-refinancing-operations (RLTROs) to provide banks cheap cash at rates that are lower than the deposit facility so they can lend to companies and households affected by coronavirus and efforts to contain it. It also radically increased the scale of its bond purchases to €140bn per month, from €20 bn previously, on a temporary basis. This quantitative easing (QE) will "reinforce the accomodative impact of policy rates" and will end "shortly before" the ECB starts lifting its key interest rates. 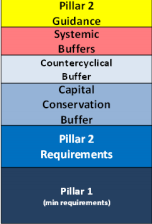 Above: Structure of a European bank capital buffer.

ECB regulators have also agreed to allow banks to tap some of their regulatory capital reserves in order to support lending, in a similar but more significant move to that announced by the Bank of England (BoE) Wednesday.

Banks will now be able to lend cash previously reserved for "Pillar 2 Guidance" purposes in addition to their counter-cyclical as well as capital conservation buffers. That could free up at least 2.5% of the Eurozone banking sector's risk-weighted-assets for new lending, although the decision is temporary.

"The ECB clearly has understood the challenge at hand, which is good news, but the package such as presented above leaves a lot of questions. Firstly, has the reversal rate been reached? We have to assume that it has. Secondly, TLTROs, even if unlimited, increase the net supply of liquidity but they don’t make sure the money goes to where it is needed," says Claus Vistesen, chief Eurozone economist at Pantheon Macroeconomics. "This then brings us to direct transfers, which is a fiscal task."

The Euro-to-Dollar whip-sawed between 1.1196 and 1.1301 in the moments after the initial surge as markets digested the ECB's decision to leave rates unchanged while radically increasing other forms of stimulus in a bid to support the Eurozone as authorities grapple with the world's largest number of coronavirus infections outside China. 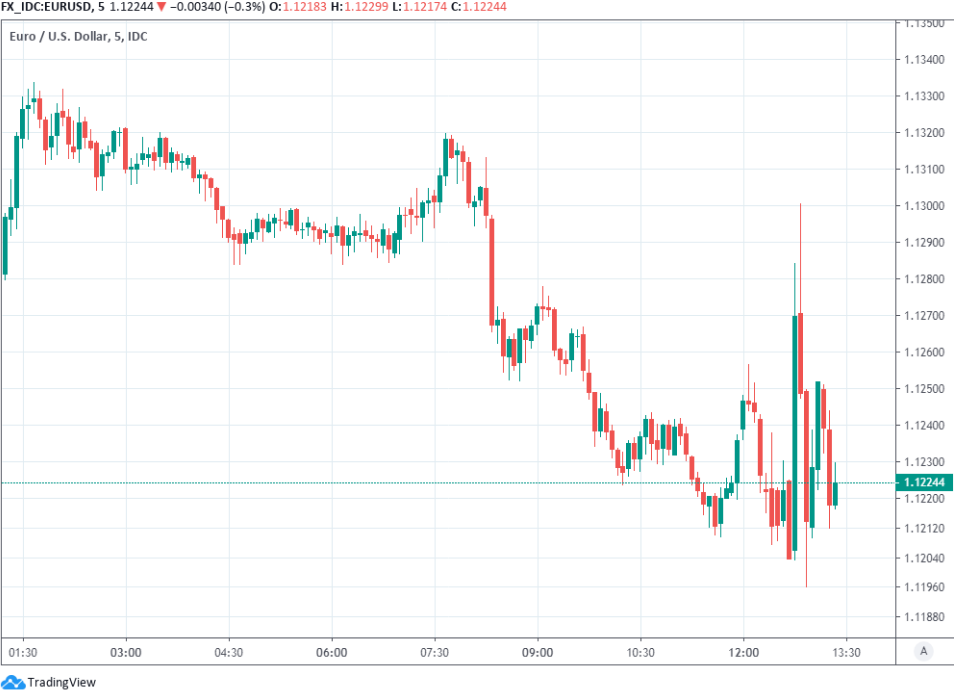 "We think that cutting the TLTRO rate and loosening the other programme conditions will be much more supportive of easier bank lending conditions than reducing the deposit rate. So the policy mix here makes sense. Having said that, the overall scale of the package, given that the economy is likely heading for recession is modest," says Sandra Phlippen, chief economist at ABN Amro.

All measures are intended to ensure that already-low financing costs are not a barrier to households or businesses accessing funding during the crisis, although their impact on the Euro outlook is far from certain. Not least of all because bond yields and the Euro have been crushed by the ECB's negative rate and QE policies since they began in 2015, but also because the Euro has emerged almost perversely as a beneficiary of the coronavirus outbreak.

"With the Bank’s main deposit rate already at a record low and deep in negative territory, it simply couldn’t cut any further without risking the self-defeating prospect of putting banks off lending," says Ulas Akincilar at Infinox. “Normally an interest rate hold here while rates fall in London and Washington would pep up the embattled Euro. But we left normality behind a long time ago, and the single currency soon fell victim to the rout on Europe’s equity markets.”

There's further uncertainty about the likely impact of Thursday's package because as highlighted by Pantheon, neither TLTROs nor reductions to the bank capital buffers ensure that funding actually gets to those who need it most. And there's always been widespread doubt over the effectiveness of QE as a stimulus for anything other than stock and bond markets. 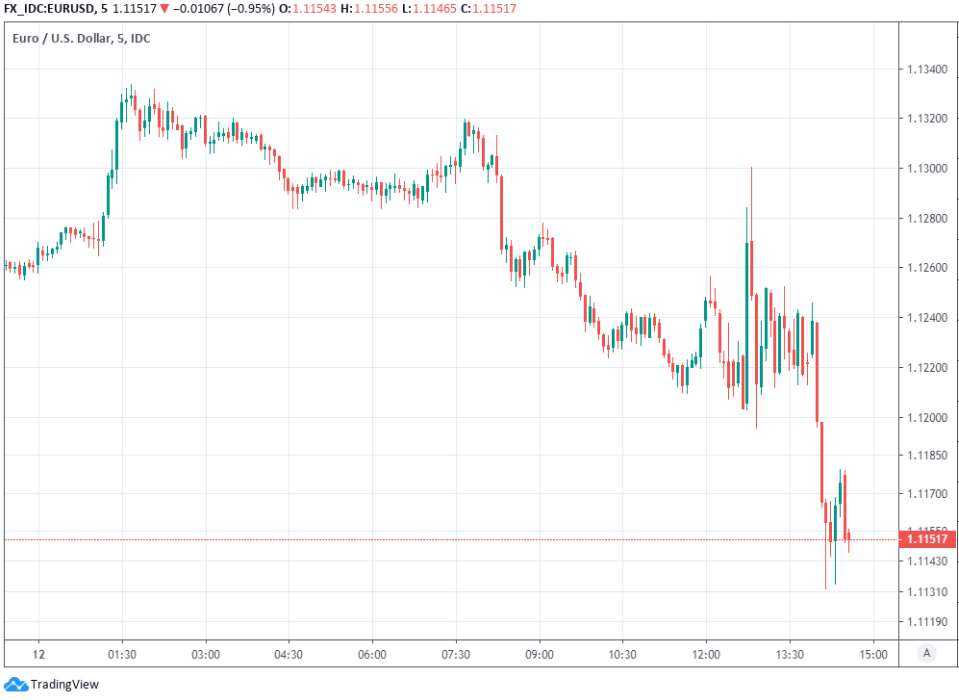 President Christine Lagarde acknowledged this deficiency in her press conference, saying "risks are definitely to the downside" of newly downgraded growth forecasts before calling for governments to step up and provide fiscal support to the companies and households who're battling the coronavirus

"Trichet’s ill-timed rate hikes in 2011 are a clerical error compared with today’s disaster," writes Pantheon's Vistesen, in a post-press conference note to clients. "Today’s performance will go down as a catastrophic failure by part of the ECB. It is one of the world’s largest central banks, and today markets were crying out for a backstop; they got anything but. Ms. Lagarde spent significant energy on the press conference calling on fiscal policy coordination as the key tool to deal with the fallout from Covid-19. This is self-evident."

Lagarde said the European Commission intends to make an announcement about fiscal policy on Friday, although it doesn't control the purse strings in Germany or other countries that have scope to spend and the Euro-to-Dollar rate had turned decidedly lower long before she'd finished speaking.

The UK and Australian governments have provided stimulus equal to around 1% of GDP this week and others including the U.S., Canada and New Zealand are expected to follow suite, although there's uncertainty about the European response given the usual reluctance to spend in some countries and EU rules that require many others to cut spending this year.

Meanwhile, ECB policymakers are constrained by the already-low level of interest rates and the significant stimulus previously provided through quantitative easing, which has left the bank with little scope to reduce rates further while making it the owner of a large portion of the EU bond market. And this is at a time when countries are increasingly closing their borders to travellers from Europe as the continent morphs into a Western Wuhan and containment efforts threaten to topple an already weak economy.