- After crashing through 1.1958 support in GBP fire sale.

- Schools shut amid rumours of restrictions in London.

The Pound-to-Dollar rate suffered its most brutal sell-off since the Brexit referendum on Wednesday, leaving it wallowing at 1985 lows amid another agressive surge in U.S. exchange rates that some analysts say could send the British currency tumbling all the way down to 1.05.

Investors are liquidating portfolios in a manner rarely if-ever seen in modern times, with traditional risk assets like stocks and commodities being hammered while even typical safe-havens like government bonds also hemorrhage capital. Panic in markets is benefitting U.S. bonds and the Dollar to the detriment of all others, with ,any non-U.S. bond markets seeing outflows which drove UK and some European yields up by 50% Wednesday.

The Dollar has surged as investors continue an apparent rotation into cash, which is being underwritten by the world's reserve currency; the Dollar. Gains for the greenback  have wrought a 10% straight-line loss on the Pound-to-Dollar rate in the last fortnight, taking out several key support levels in the process and leaving the exchange rate at risk of further steep declines.

"GBP/USD has plunged to levels last seen in 1985," says Jane Foley, an FX strategist at Rabobank. "It is likely that GBP/USD will experience a bounce when the crisis has peaked and when USD demand relaxes. That said, this may not happen until the number of new coronavirus cases and mortality rates reduce. It is our current expectation that USD demand could ebb on a 3 month view." 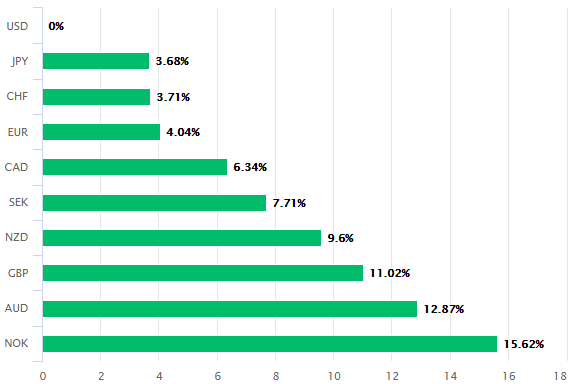 Wednesday's price action came in another chaotic session where President Donald Trump invoked the Defense Production Act, enabling the White House to do something like commandeer or redirect the production facilities of private companies toward coronavirus containment efforts, and following a decision by the UK government to close schools from Friday onward after the UK saw its largest daily increase in coronavirus cases again, rising from 1,954 to 2,626. Those developments exacerbated earlier losses, which were already steep.

"Although the UK authorities are currently pledging to do whatever it takes to pull the economy through the coronavirus years, the UK is already saddled with a high debt pile. This could make the prospect of the government’s GBP350 bln emergency rescue from the UK government potentially unappetising to many investors particularly given it new isolation outside the EU and the consensus expectation that the country’s divorce from the EU will weigh on growth," says Rabobank's Foley. "We are forecasting cable at 1.19 on a 3 month view."

The below chart shows the Pound-to-Dollar rate crashing through multiple support levels in recent days, with the latest to give way being on Wednesday. The 1.1958 level marked the 100% retracement of the September 2019 uptrend and it's now not until all the way back in 1985 that the genesis of the last still-intact uptrend can be found. Sterling is also closing in on the 100% retracement of that move, way down at 1.0515, another 1985 low.

"It’s getting worse and worse for sterling after today’s Eurobond-driven move lower in risk sentiment knocked GBPUSD below chart support," says Eric Bregar, head of FX strategy at Exchange Bank of Canada. "Not even the September 2019 lows in the 1.1950s could stem the selling. The market is now entering an extremely precarious spot technically where we could see a panicky fall to the 2016 post-Brexit lows in the 1.14s." 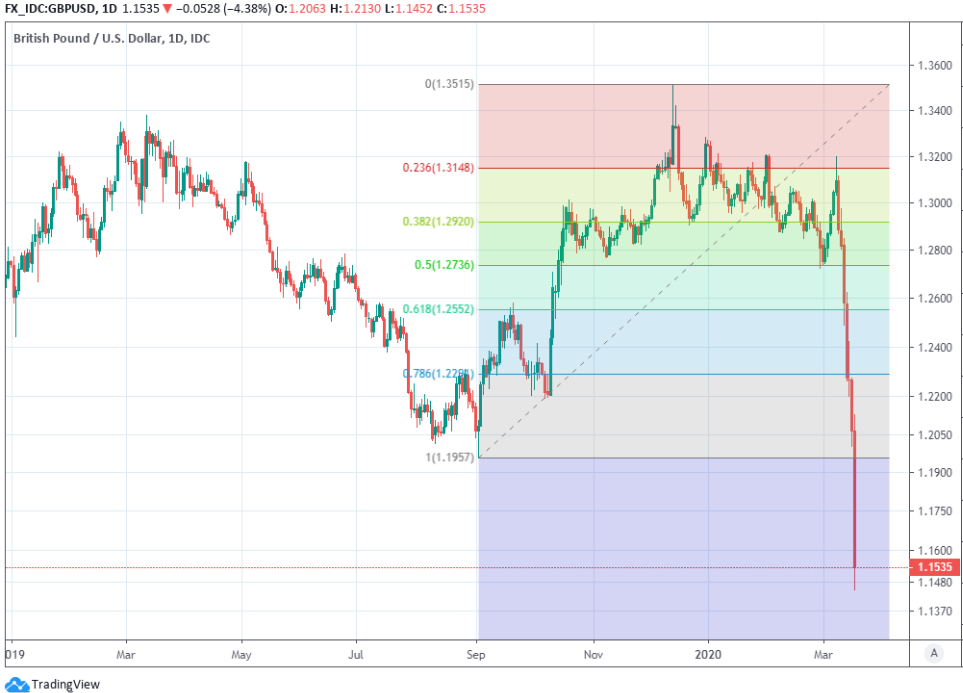 Above:  Pound-to-Dollar rate shown at daily intervals with Fibonacci retracements of the September 2019 uptrend.

Exchange Bank of Canada's Bregar says the Pound-to-Dollar rate could find support around the "post-Brexit lows in the 1.14s," although whether such support provides anything more than momentary respite remains to be seen. Not all data vendors record the 1.14 levels as having been witnessed although they were reported by the press at the time and were said to to have resulted from a 'flash crash'. Others have previously looked to 1.15 for support, which was reached in the Wednesday session.

"We are adding to our short GBP and CAD positions as non-linear markets," says Jordan Rochester, a strategist at Nomura. "Current accounts need FX depreciation to find some balance. GBP and CAD are two of our favoured shorts in the G10, along with SEK and NOK shorts that we also hold."

Price action came with London’s stock markets slumping and the country's 10-year bond yields rising more than 40% amid reports suggesting the government is planning to “heavily restrict” travel into and out of London. The City of London is home to financial assets worth more than three times UK GDP, which might get flighty in the event of severe disruption to the City, if they're not already. And this comes at a time when concerns about the current account are rising.

UK asset sales are gathering pace at a time when concerns about the current account deficit are picking up and the government is preparing to ask markets if it can borrow double-digit percentages of GDP to help the economy cope with the fallout from coronavirus. The current account deficit is often described as the UK’s achilles heel and means that Sterling depends for part of its value on continuous inflows of external capital that might now be drying up or simply overwhelmed by other outflows. Investors appear to be chasing after Dollars and American bonds, with little else getting a look-in. 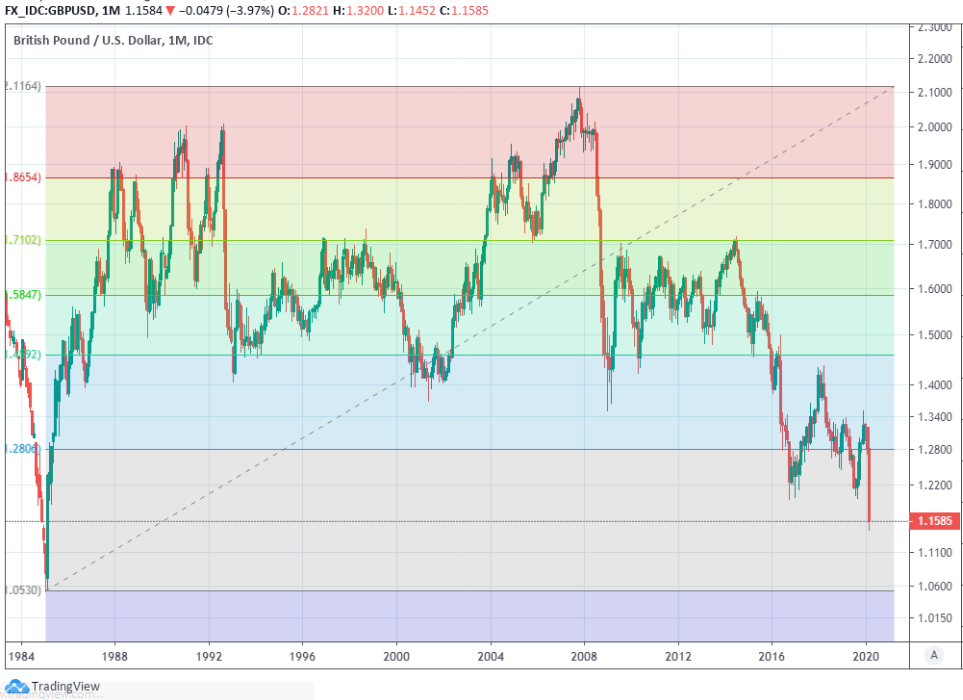 Above:  Pound-to-Dollar rate shown at monthly intervals with Fibonacci retracements of the 1985 uptrend.

"The current account needs to be completely balanced, while capital markets struggle to function as they normally would, GBP could fall to a level of 1.01 to 1.05 in GBP/USD and 1.03 to 1.07 in EUR/GBP," warns Nomura's Rochester, effectively tipping the 100% retracement level of the 1985 uptrend.

Sterling's losses are so significant they now risk drawing a rare intervention from the Bank of England, the Governor of which told Sky News Wednesday that he will address weakness in the currency at next Thursday's meeting. The Pound-to-Dollar rate loss topped 5% around the London close, taking this month's decline into the double-digits, potentially worrying a central bank that's unable to raise interest rates due to the economic damage being caused by coronavirus.

The Pound has been extending its 2008 financial crisis fall against the Dollar ever since the Brexit referendum and Fibonacci extensions of that move now indicate the Pound could find support, even if only fleetingly, at 1.1062. But beyond there they indicate the next level down is 1.0295. That's near to parity while the 61.8% extensiona points below parity. Both are levels that will have significant macroeconomic consequences for the UK if the post-referendum experience is anything to go by. And in light of the unprecedented measures being taken to contain the coronavirus across the world, it's not clear how long such depressed levels of the Pound will be sustained for.

"While it’s 2020 not 2008, we can’t help but notice that the market is following the same playbook, when we looked in Market reactions COVID-19 vs. GFC the correlations of FX vols and credit were uncanny. GBP was one of the notable underperformers of that period falling 30-35% in H2 2008 into 2009 too," says Nomura's Rochester. "Government borrowing is likely to rise in a fashion similar to that of the 2008 bailouts in the UK and with it demand a wider current account deficit and reliance on market funding. It’s why despite the extraordinary 8% fall in GBP this month we expect the currency to continue to underperform until it is clear the worst of the economic hit from containment measures is behind us." 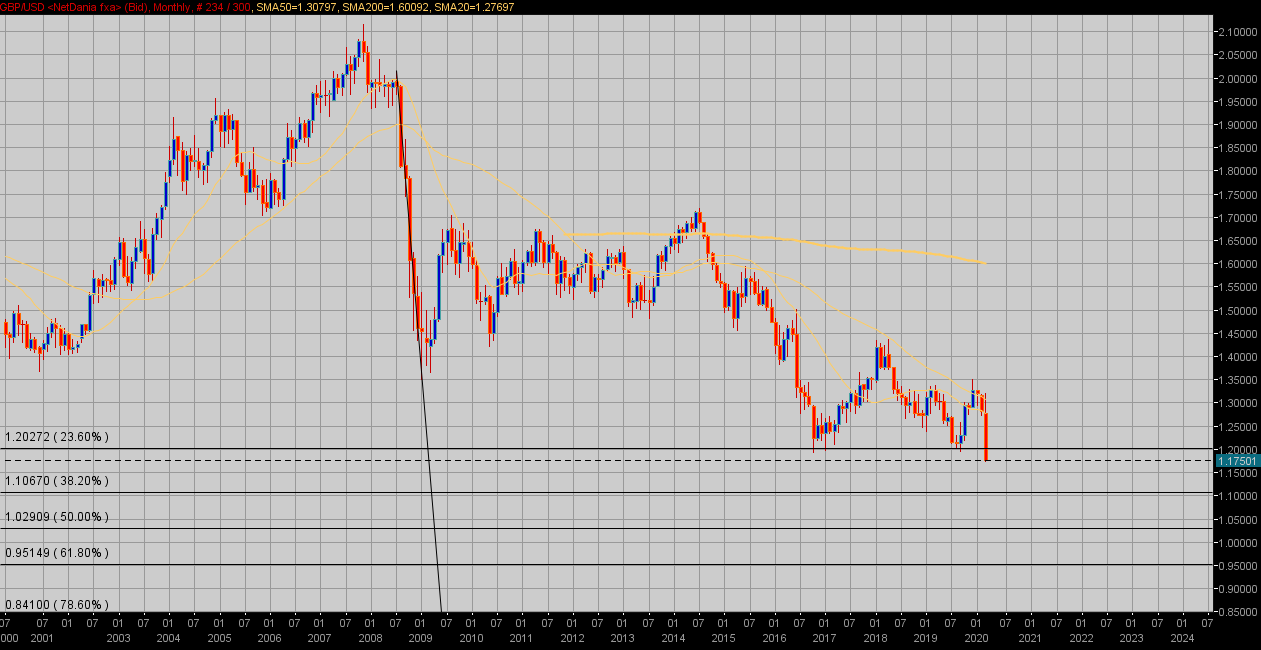 Above: Pound-to-Dollar rate shown at monthly intervals with Fibonacci extensions of the 1985 downmove. Source: Netdania.